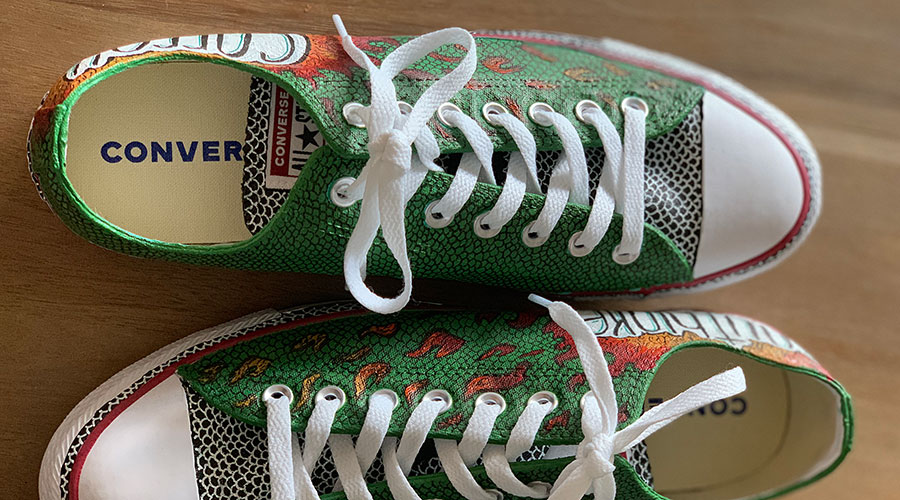 Cheerleader Bella Hanson gives all of her creative self as a spirit squad member, artist and budding fashion designer in painting a picture-perfect beginning to senior year.

At first meeting, Bella Hanson might not seem like the typical cheerleader. Quiet and soft-spoken, the Carroll High senior admits she had some challenges to overcome in taking a stage lit up by a figurative giant spotlight.

To her friends and teammates, though, the 17-year-old is a role model with style and artistic talent who one day might be a fashion designer.

“She gives her all, and she has a big heart,” says Julie Cox, Dragon Varsity Cheer sponsor and an English teacher at the high school. “She works so hard in cheer, and it’s mirrored in the classroom as well. Everything she’s asked to do, she does it, and beyond.”

Said fellow varsity cheerleader Avery Kearney, who has known Hanson going back to the hallowed halls of middle school: “Bella is one of the best people at always doing what she’s supposed to do and setting a good example for the rest of the girls. I just think she’s an amazing, caring person. I’m very happy to have been friends with her for all these years.”

Cheerleading and her role as part of Carroll’s spirit squad are a big part of her story, to be sure, but there’s more. All the diligence and practice required are traits she applies to her academics and the other organizations in which she participates. Hanson embodies the essential three P’s — persistence, patience and passion — in all her pursuits.

Among them is her art. Hanson typically works with pen and ink because it allows her to put extra detail into her work; her favorite portrayals are of people.

This year, Hanson also meshed her artistic abilities with her love of cheer by helping design new uniforms for the team’s 2020-21 season. She also branched out by entering an art contest through the PNC Bank in Southlake’s Town Square, choosing to use acrylics rather than ink. Her submission, which portrayed a mix of different Southlake landmarks set against the Texas flag, was one of five chosen to be displayed in the bank.

“It was an interesting experience because I’ve never done something like that, and I don’t normally paint, so I was just like, I’m going all-in,” Hanson says. “I decided to take this opportunity, and even if I wasn’t the best painter, I would try this competition. I was picked. I was so honored.”

The Texas flag represents the “spirit of Southlake shared in the hearts of the people who live here.”

She says she is considering pursuing art in college, but she also has an aptitude for fashion design. She combined both to be among the winners chosen in a contest called “The Mayor’s Shoes.” Carroll students drew up a design for tennis shoes to be worn by Mayor Laura Hill to Carroll school events. In total, seven were chosen, including Hanson’s. Her design is being worn by Councilman Chad Patton.

Her vision was to create something “fierce,” to represent Carroll’s Dragon mascot, and also stylish.

“I wanted to incorporate current styles of shoes today and our Dragon Pride.”

The cheerleading squad also has benefited from her fashion sense, which she has refined through a design class she took last year. Each senior class has the option to choose a new look among the uniforms the cheerleaders wear that school year. They typically choose samples from a catalog, but having Hanson meant this class could have something that would express their personality, done by one of their own.

Hanson also didn’t sit around waiting for the pandemic to pass like a bad spring storm. With time on her hands, she learned to sew with the help of art teacher Johanna Belwood. She then started making masks, giving out around 70 to family and friends. She has since produced about 300 and is hoping to launch an Etsy site for her new business.

“I think she has a bright future,” says Cox. “She’s meticulous, and a lot of forethought goes into what she puts together. She’s going to be wonderful at whatever she does because she’s diligent, and she puts forth 120 percent. She’ll be a success at whatever she wants to do.” 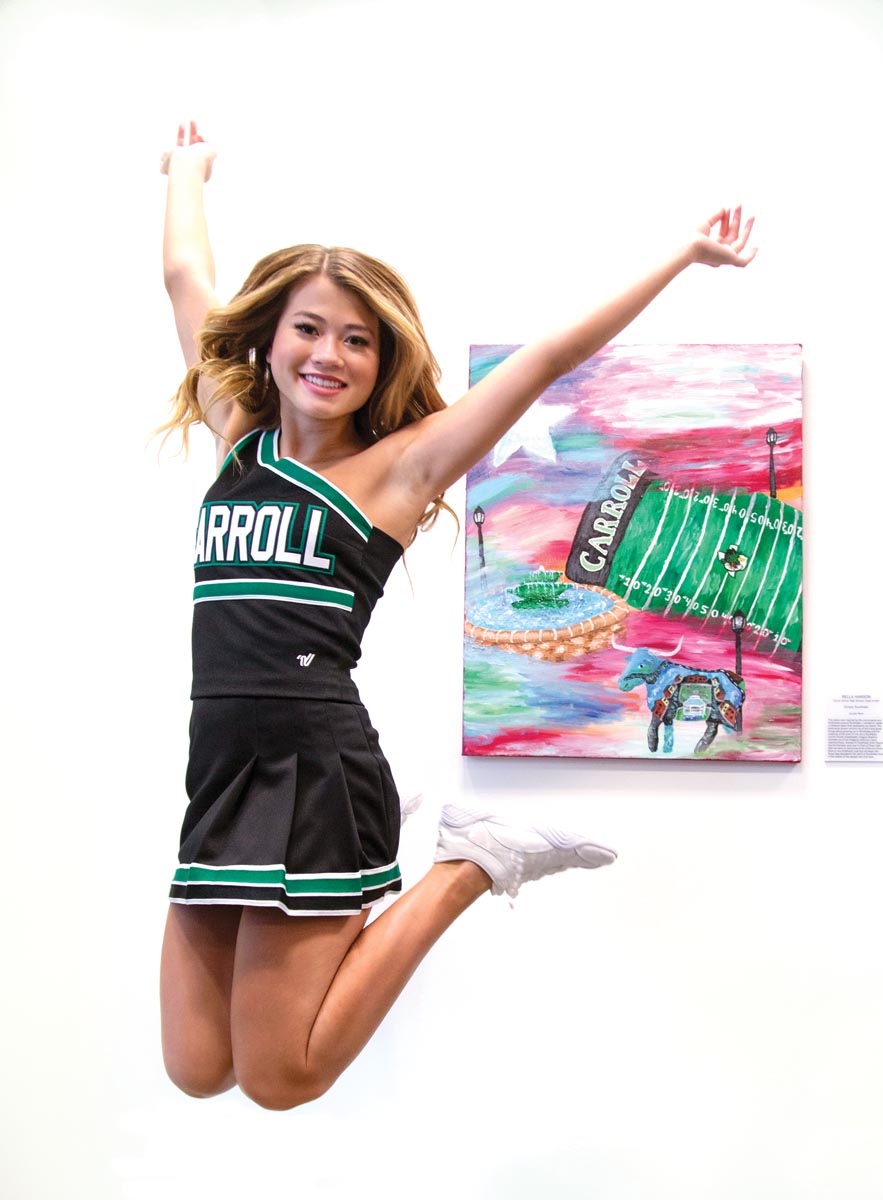 Bella Hanson with her artwork on display at a Southlake bank. 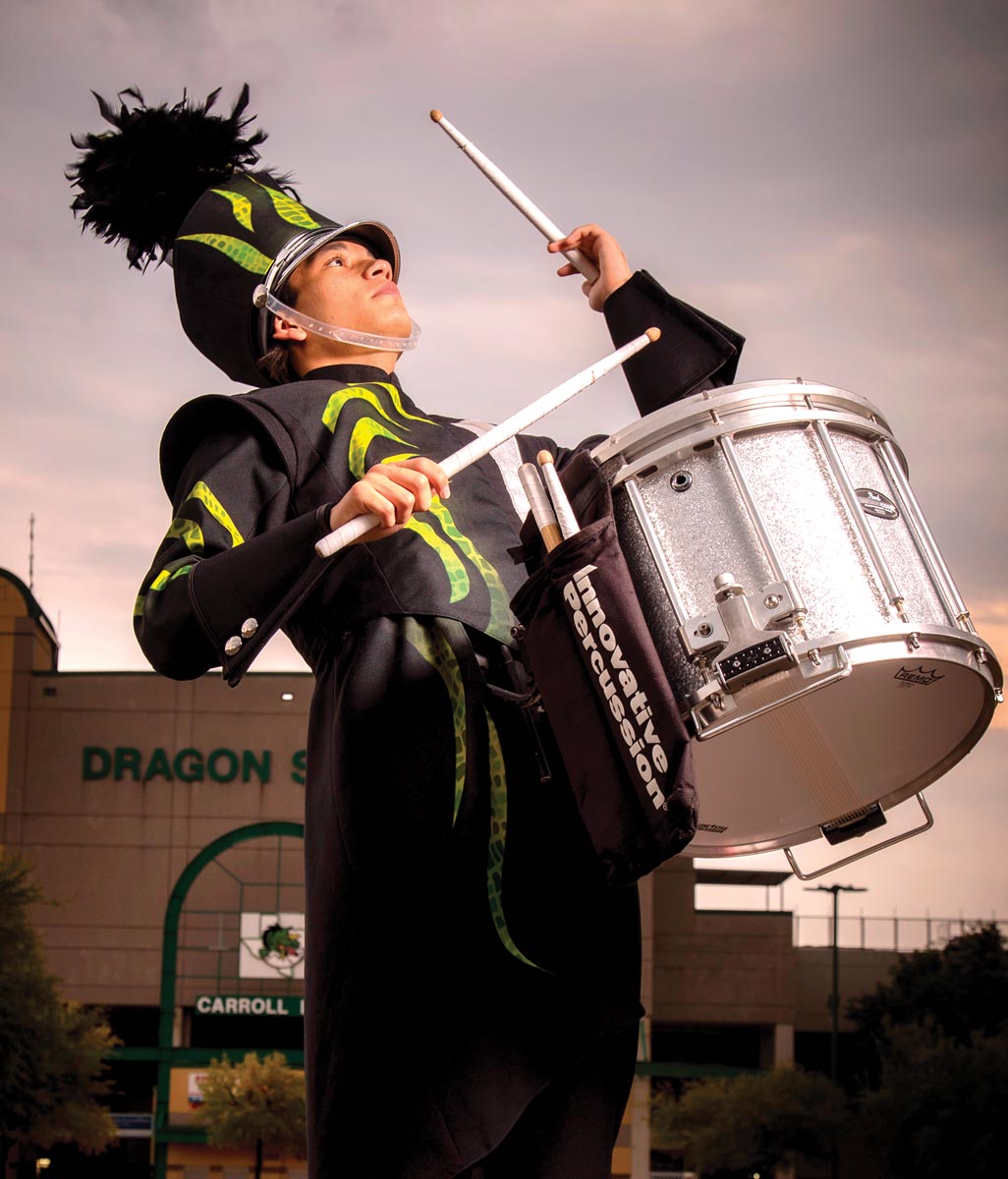 Regi Capati’s ascent to leadership roles in Carroll’s band was a journey that started with his life in Scouting and a sacred, honor-bound oath to always ‘do my best.’

The 2019-20 spring semester ended with a plot twist when COVID-19 put a stop to in-person school and practices. But for Regi Capati, a percussionist in the Carroll Senior High School band, the season didn’t stop there.

The then-junior capped things off by being elected band president for the 2020-21 school year. He also took on his second term as leader of the snare line and became the head percussion section leader.

COVID, be darned; leaders got to lead.

Capati, 17, credits his journey through band and the Boy Scouts for helping him land his expanded roles. He started playing in sixth grade, choosing percussion because his math- and science-oriented brain understood the rhythms involved. When he moved on to high school, Capati had to pick which instrument to focus on.

He chose the snare drum.

Though it’s uncommon for a freshman to make the drum line, he was the last person to get a spot on the snare line that year.

It’s amazing what can happen when you vow on your honor to do your best.

“I stayed on and kept practicing and eventually made it up to here,” Capati says. “Through band, I really have just learned to be committed. You’re a part of a group where we all depend on each other. If one person doesn’t play the right note or doesn’t hit their spot on the field, it’s going to look wrong or sound wrong. So even if it’s hot, even if your drum or instrument is heavy, you have to become mentally tough and commit yourself to the show and to everybody else.”

Capati’s leadership positions require not only solid performance but a stellar reputation among fellow band members, with the role of president being determined by Capati’s peers. The section leader position, though, involves a more intense process. Candidates must submit an application and teacher-evaluation forms and recommendations. They also must complete a performance assessment to evaluate their musical proficiency.

“He’s just such a great role model,” says Jon Maynard, percussion director. “He leads by example in and out of the classroom. I’m very thankful to have a student like Regi in a position of leadership in our organization. It’s just really cool and unique to have somebody like that who is able to handle everything that we ask of him.”

Capati is well-suited for his leadership roles, which often are taxing, says Brady Black, Capati’s friend and the 2019-20 head percussion section leader. He must be an example for the rest of the drum line and, as such, is held to the highest standards.

“People look up to you, so you need to act in a way to help them succeed in the future and show them how they should act now,” says Black, who is studying aerospace engineering at Texas A&M University. “Regi is very driven; any goal he sets, he pretty much accomplishes. That’s a quality that’s really helpful to have when you’re section leader.”

Capati is no stranger to problem-solving. He is an active Boy Scout — he hopes to achieve Eagle Scout status — and also enjoys working out and hanging out with his friends.

For his Eagle Scout project, he created an interactive sensory board for use by children with special needs during therapeutic horseback rides. It will function similarly to a shape-sorting toy but be upgraded to include color and number matching, as well.

With the help of Scout friends, Capati plans to install it at Amy’s Wish With Wings in Southlake.

“The first Eagle Scout project I helped with was also at Amy’s Wish With Wings,” Capati says. “Over the years I have come to do many projects at the location and knew it could one day be a possibility for my own. I think it is a great charitable organization to do service for. I wanted to honor and follow the Eagle Scouts who have done projects before me, help with a great cause and also pay my great education back to the community by helping others with learning.”

Scouting, Capati said, has guided him in living “honorably.”

“The first words of the Scout oath are, ‘On my honor, I will do my best,’” he says. “Every time I would say those words as a young Scout, I had no idea how much I would actually take it to heart in the future. I try to do the best that I can in all areas and help others to also do their best.

Scouting, he said, was his first inspiration to be a leader. It still drives him today in his roles with the Carroll band. The pandemic has put those leadership skills to the test. Nothing has gone to plan: Summer band and marching season was canceled. Football games will not include the full complement of the band.

But he’s grateful that his family and friends have remained safe and healthy.

“It’s very unfortunate, but one thing I’ve been trying to think about and let other people know is that our safety is more important. I appreciate that our emotions and our physical health were taken into account,” Capati says. “I think we’re all just going to keep playing, keep growing as well as we can as musicians and as people, and I guess that’s really what band is about — that commitment and that perseverance.”