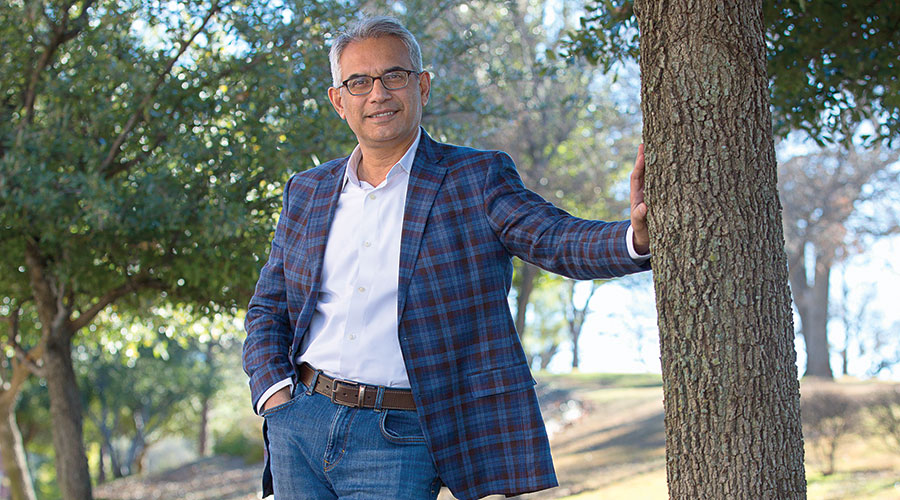 Shahid Shafi reflects on public service, the ordeal that made him stronger and his plans for the future.

The letter arrived on a piece of floral stationery.

In small cursive writing, a 17-year-old from Bedford wrote to Dr. Shahid Shafi, “Thank you for choosing to fight for our Constitution and our First Amendment.”

Phone calls and emails poured in, too. Strangers sent messages on Facebook and Twitter. People stopped him in public and shook his hand. The Wall Street Journal weighed in, writing, “Shahid Shafi knows America better than many other Republicans.”

One year ago, Shafi, a surgeon and practicing Muslim, survived a monthslong effort by a small faction of the Tarrant County Republican Party to oust him from his role of vice chair because of his religion.

The vote made national news, casting a shadow across Tarrant County. Yet for Shafi, also a Southlake City Council member, the ordeal only reaffirmed his faith in his country.

“To me, the story was how much support I got from every corner of the Republican Party and every corner of society,” he says. “I was overwhelmed by support. How can I not be optimistic?”

Shafi will tell you he is a perpetual optimist, a true believer in the American dream.

This is why: He grew up under a brutal military dictatorship in Pakistan, where one’s birth determined one’s fate, where journalists were flogged and imprisoned, where any hint of opposition was squashed, violently.

So at age 25 he packed a few clothes and a box of medical books, boarded an airplane and left Pakistan for the United States. The date was July 4, 1990. When he arrived, he felt like he could finally take a deep breath.

“I grew up with America as the land of opportunity, a cradle of knowledge and education, a haven for free speech and democracy and a beacon of hope for those oppressed across the world,” he says. “I came to America for all these reasons, and these reasons are as true now as they were back then.”

Do not misunderstand him, Shafi says. The American dream is not easy. To pay for his education, he says he came to this country already $20,000 in debt.

Once, he recalls, he tried to withdraw $10 from the bank to pay for a meal but had insufficient funds. He learned that a small order of McDonald’s french fries with lots of salt and two waters could satisfy his hunger for six to eight hours.

“From that low, to be able to reach where I am today is a testament to this country,” says Shafi, who is CEO of the Grapevine-based Surgical Group of North Texas. “I don’t think I could have achieved what I achieved anywhere else in the world.”

With her finger, Ayesha Shafi drew an imaginary line across a map of the United States. She and Shafi had met as students at Johns Hopkins University. Tired of the cold winters, she told her husband they could live anywhere south of her line, which Shafi jokes was her “very own Mason-Dixon Line.”

In 2003, the couple landed in Dallas, where Shafi worked as a trauma surgeon at Parkland Hospital. About a year later, they moved to Southlake, drawn to the excellent schools and bustling Town Square.

“As immigrants, we had a very strong desire to find a home and grow our roots,” he says. “Southlake is that for us. This is our home.”

Shafi became a naturalized U.S. citizen in 2009 and knew immediately he wanted to serve his community. Two years later, in 2011, he ran for Southlake City Council and lost. Undeterred, he ran again in 2014 and won, becoming the town’s first council member of South Asian descent.

On election night, Shafi stood before supporters and said three words: “Only in America.” He continued to say that only in this country is it possible for a brown Muslim immigrant who speaks with an accent to win the support of his fellow Americans based on his accomplishments. In America, he said that night and often since, “it does not matter where you come from, only where you are going.”

As a city council member, for the past six years he has focused on strengthening public safety, reducing property taxes and maintaining the town’s open spaces and parks.

“Dr. Shafi has distinguished himself as an independent voice for the people of Southlake,” said David Rea, a Southlake homeowner and friend. “He is always willing to listen to his constituents and is never afraid to speak his mind.”

When Shafi learned of the campaign to remove him from his leadership role in the county Republican Party, he was initially silent, at least publicly. Friends suggested he make a statement, but Shafi declined.

“I had nothing to defend,” he says. “Freedom of religion is a founding principle of this country.”

The motion to oust him failed 139-49 and Shafi retained his seat, which is a volunteer position (he was appointed by party chairman Darl Easton of Euless).

Afterward, he says, he was not angry with the woman who started the campaign. “She was exercising her own right to freedom of speech.”

The ordeal did nothing to dampen Shafi’s love for his country, says Doug Harsy, a friend and Southlake resident. “He is the most patriotic person I’ve ever met and one of the best citizens I know. This community is lucky to have him. He is such an asset to Southlake and beyond.”

On Dec. 23, 2019, Shafi and Easton stepped down from their Republican Party posts to make way for the incoming leadership.

As for his political future, Shafi will complete his second and final city council term (limited in Southlake to two) in May. He does not know what is next, but says he plans to stay involved.

“The most important legacy I can leave behind is to inspire others to pursue their dreams, even the ones that seem unachievable,” he says. “I believe the American dream is still alive, and I’m a living example of it.”