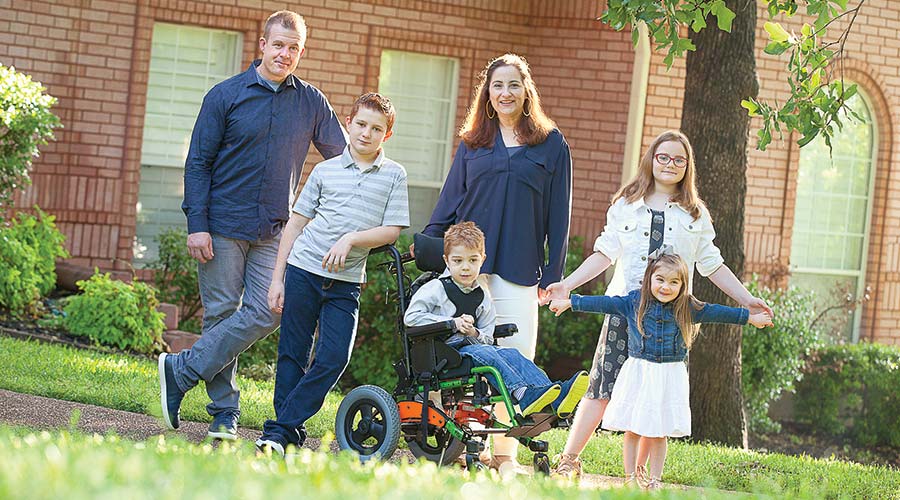 Gina and Matt Hann, along with their medical dream team, raise more than a million to combat a rare genetic disease. It could save their son ­— and many others.

Joseph Hann, 6 going on 7, is a redhead with big hazel-brown eyes and long lashes. His smile is contagious, and he’s prone to belly laughs. It has been two years since he was diagnosed with Batten disease, a rare and terminal condition that has already robbed him of his sight and some motor skills, but he hasn’t lost his joy. His parents, Gina and Matt, although told that there was no hope, have never lost theirs.

Joseph was 3½ years old when his parents noticed that as he learned the alphabet, he’d ask to “see” the letters before naming them, holding the book close to his face. As his glasses prescription rapidly changed, they were told that Joseph might have a retinal disorder. But in January 2017 he had a seizure, and the emergency room neurologist recognized some indicators for Batten disease, a rare neurodegenerative disease caused by a gene mutation, resulting in seizures, vision loss, cognitive impairment and early death.

While the news was devastating, the Hanns would later learn they were fortunate to get a diagnosis so quickly. For rare diseases like Batten, “a lot of people end up on a diagnosis odyssey, losing years before they receive a diagnosis,” says Gina. The ER neurologist had read an article about Batten just two weeks earlier, making it possible for him to recognize the disease, which strikes 1 in 100,000. Joseph’s specific form of Batten, CLN7, affects just one in a million. 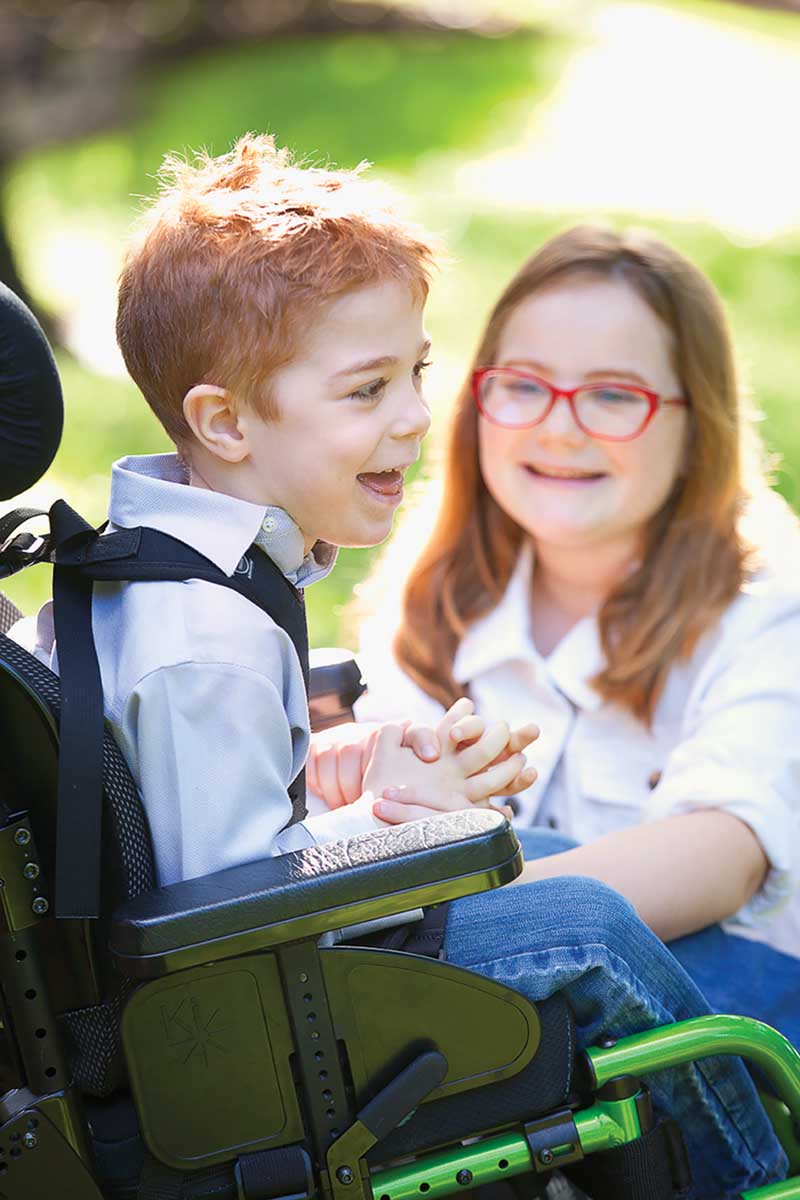 Gina and Matt have been candid with their children about Joseph’s medical issues, and they leave it up to each to be involved or stay home and just be kids on any given day. Matthew has gone along on fundraising events; Sarah, who has made headbands to raise money for the clinical trial, also organized 30 people at her school to wear stripes in support of Rare Disease Day in February. 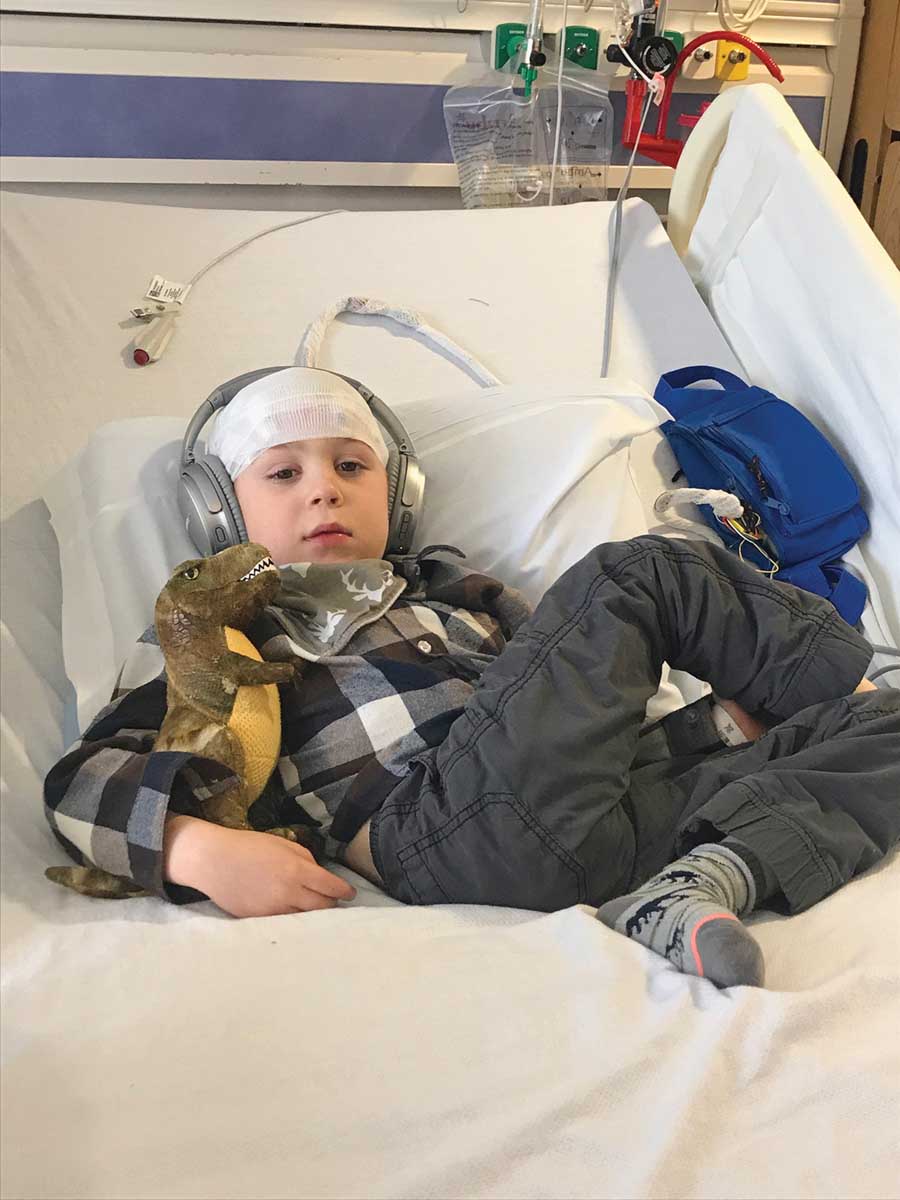 Joseph is participating in a natural history study at Children’s Health Dallas; such studies track and provide data about rare diseases.
Photos courtesy of Gina Hann

With no cure available, the Hanns, who worked for Texas Instruments in Tucson, Arizona, at the time, used all their contacts to try to find anyone who knew anything about the rare disease. Within a few emails, they met Dr. Berge Minassian, a pediatric neurologist at UT Southwestern Medical Center and Children’s Health in Dallas, who was developing a gene therapy program for neurological disorders, like epilepsy. Dr. Minassian told them that he was recruiting Dr. Steven Gray, a geneticist who had done research into CLN7. The Hanns moved from Tucson to Southlake in spring 2017 to live near the formidable team.

Once here, Joseph began seeing neurologist Dr. Saima Kayani at Children’s Health. The Hanns resumed their jobs for Texas Instruments and continued raising their four children. And in May 2017, the family launched Batten Hope, a fund under the umbrella of The Dallas Foundation, to raise money for a life-saving gene therapy program that all three doctors would have a part in developing. “We’re funding the drug development and safety studies, to make sure we can get to the point of clinical trial,” Gina says. “The goal is to deliver an FDA-approved drug to UT Southwestern, to start a gene therapy clinical trial.” The team hopes to have the drug ready for FDA submission within the current year. The clinical trial would follow shortly thereafter.

While the Hanns hope to get Joseph to treatment, there’s no guarantee he’ll be included in the trial. “You have to prove it’s safe and has the potential to help. We don’t know how strong Joseph will be by the time we get to clinical trial,” says Gina. “We’re building it on faith — if we build it, that’s Joseph’s best chance. We had to go into it knowing it might not happen for Joseph, that we may have to be satisfied with his inspiration stopping this disease for future children.”

Through the fund, Batten Hope has already raised $1.4 million to pay for the development of the new drug. For 2019, the goal is to raise an additional $400,000 to complete the funding of the clinical trial doses. “This is single-gene replacement — it’ll replace a specific gene that’s defective and hopefully create the specific protein that’s lacking, to make his brain work,” says Gina. “Single-gene therapy is really on the edge of becoming an established form of treatment. Knowledge from this trial will help to enable, in the future, the potential of multigene treatments for diseases like Parkinson’s and Alzheimer’s. The science around the clinical trial will be the first of its kind in many ways; Joseph’s trial will help answer a lot of questions that will serve so many other neurodegenerative diseases in the future.” 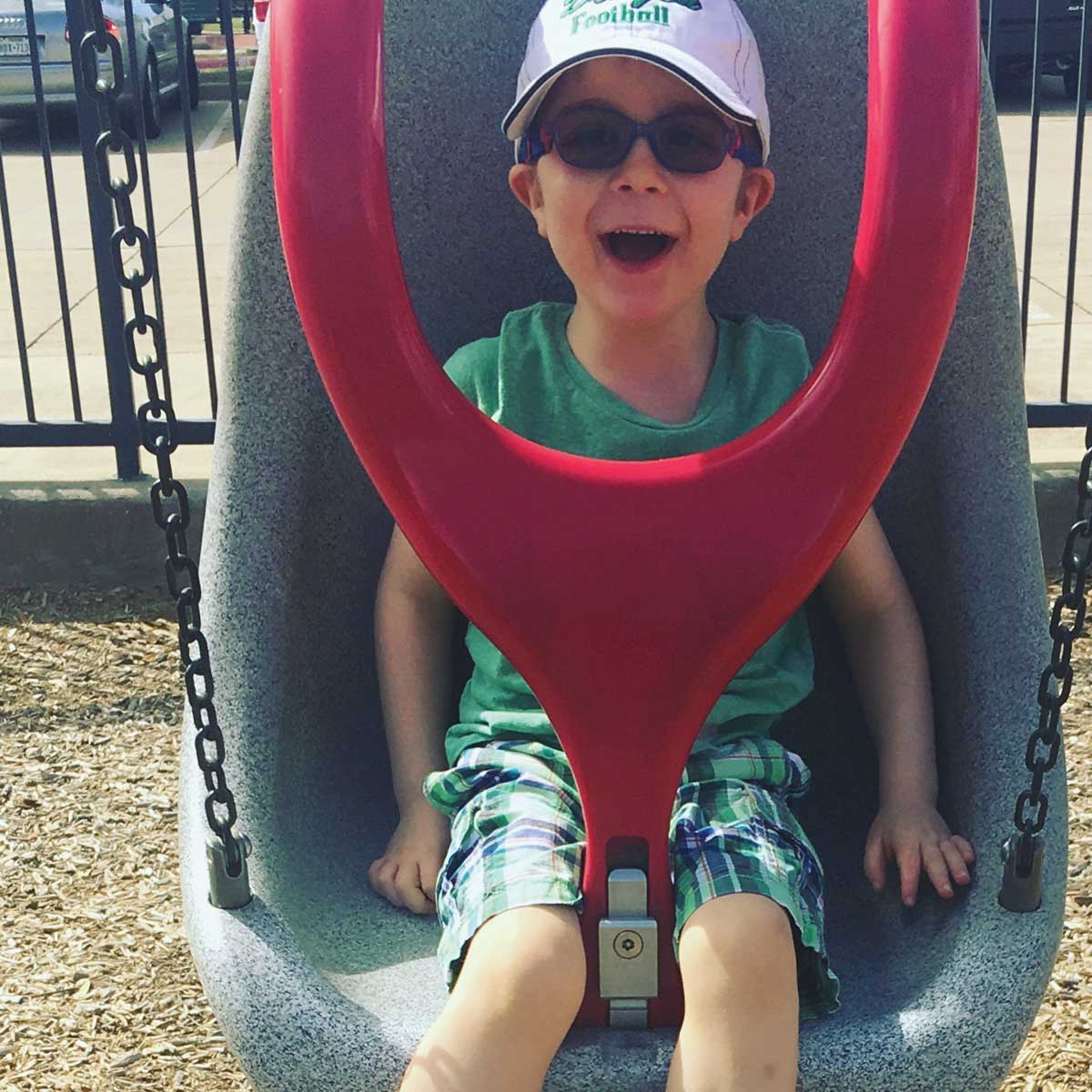 Like many kids his age, Joseph enjoys silly noises, throwing a ball, going to the playground (there are adaptive swings at his school) and getting a rise out of his sister. “He loves to tease Mary,” Gina says.
Photos courtesy of Gina Hann 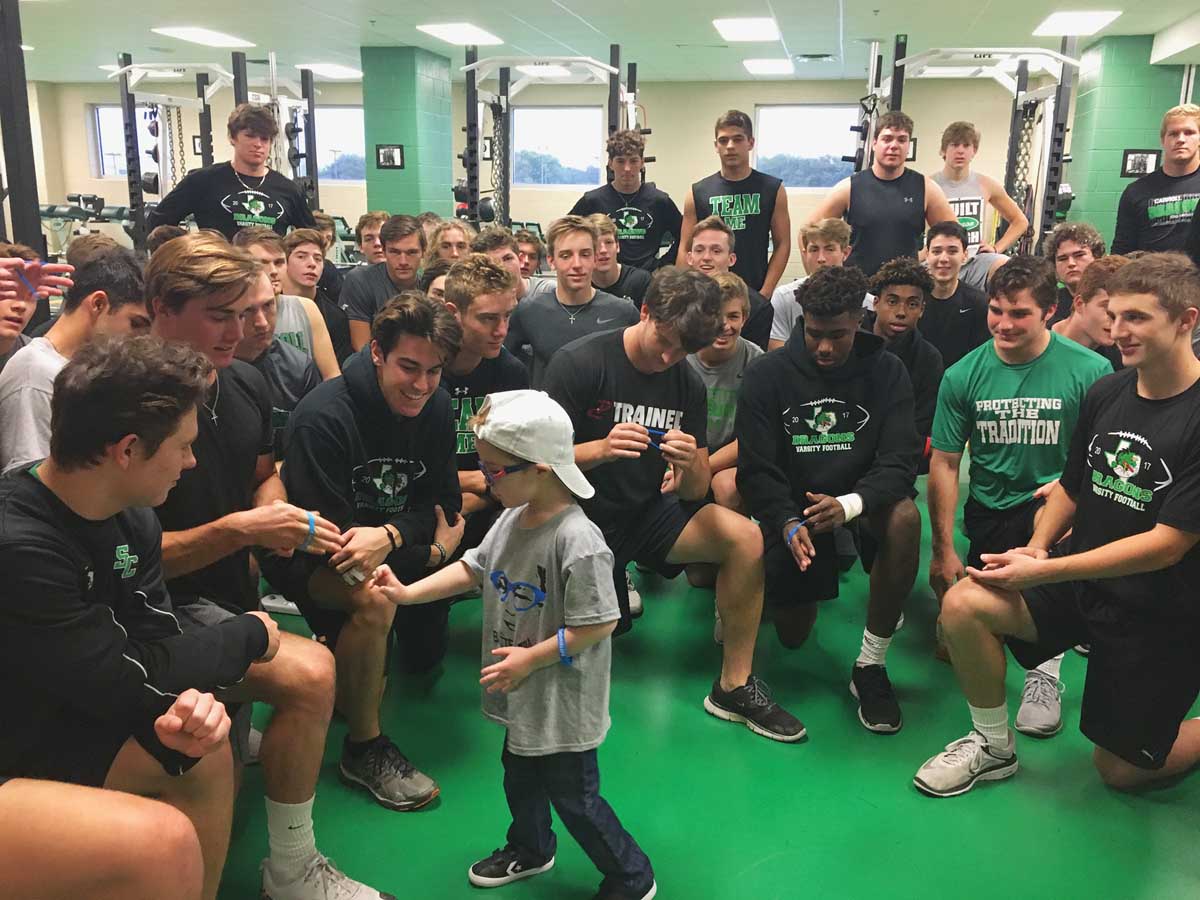 Joseph and the Dragons football team in 2017.
Photos courtesy of Gina Hann

Today, Joseph is in a wheelchair; his speech has become less clear to those who don’t know him. “The most important thing is that he still has an infectious and awesome laugh, he loves to play, loves music, loves his favorite shows,” says Gina. “He loves school, rides the bus every day, has a great team that helps him through his day, and he has a best friend, Edward. I can’t say enough about how amazing our school district is; it’s so inclusive.”

Among those quick to rally around the Hanns was the Dragons high school football team, which the family got to know when their older son, Matthew, played youth Dragons football. The team has worn blue “Batten Hope” bracelets in Joseph’s honor for the last two seasons. Small acts of kindness from neighbors, friends and even strangers have helped to boost spirits on tough days. The Hanns have also connected with other families fighting rare diseases. “A community of people who knows what it’s like is important for both getting through the rare disease and for understanding how to deal with its progression,” she says. “It gives us insight into what might happen next; it helps us to focus on preventative and maintenance therapies.”

Gina says that Joseph’s experiences have taught his family how precious each day is — and to make every day awesome. “You get this diagnosis, and it’s very devastating, but it revealed to us how incredible the human heart is,” she says. “We’re basically building a drug for clinical trial so that no future parent is told that there is no hope for their child’s Batten disease diagnosis. There is legitimate hope for this disease.”

Batten Hope To donate toward the development and clinical trial of a drug to cure Batten disease, visit battenhope.org; 100 percent of contributions go toward research. Follow Joseph Hann’s story by searching for “battenhope” on Facebook, Instagram and Twitter.

Shop for the cause at Kendra Scott The jewelry store in Southlake Town Square hosts a shopping event with a percentage of sales benefiting Batten Hope. 6-8 p.m. May 28, 31 Grand Avenue West.