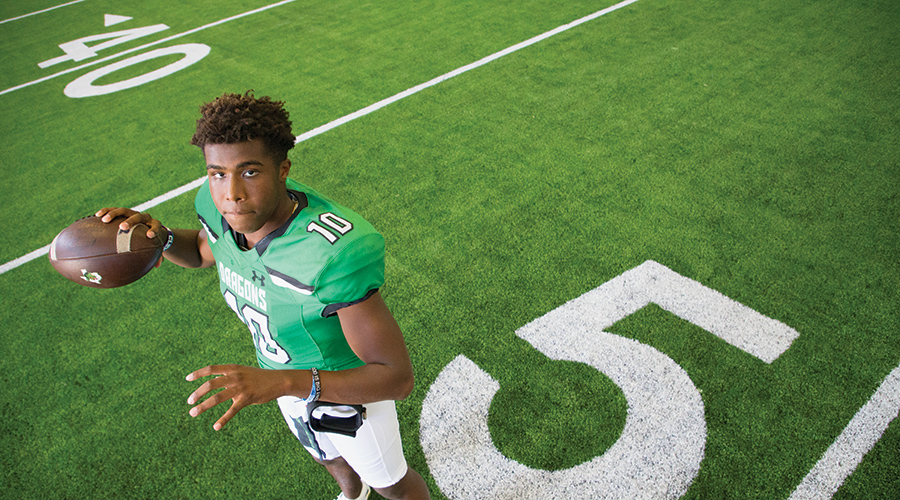 RJ Mickens joins his dad on the field after committing to Clemson.
Photo courtesy of RJ Mickens

RJ Mickens has the family genes, but his path to becoming the Dragons’ blue-chip defensive back has been blazed all on his own.

Dad never pushed, prodded, expected. The choice to play football always belonged to the boy, the son of an NFL standout.

“He was the one that decided he wanted to play football when he was 6 years old,” says Ray Mickens, a former Texas A&M star defensive back, who played more than a decade in the NFL.

Southlake Carroll senior Ray Mickens Jr., who has gone by “RJ” since birth, grew up around football, so it’s easy to understand why he would gravitate to the sport that has meant so much to his father. Sundays in front of the TV also have a way of leaving an impression.

Especially if your dad is one of the stars of the show.

“Watching him play, I always looked up to him,” RJ says. “Being young, it was cool watching NFL games. I always thought that was somewhere I definitely wanted to be.”

Still, picking up a pigskin was never mandated at home. Ray Mickens didn’t set out to create a carbon copy. Like any dad whose son wants to grow up to be like him, the senior Mickens offered a helping hand. And considering his resume, RJ couldn’t ask for a better tutor.

Ray, naturally, beams when talking about his son, and does so without pretense. RJ is very much his own man, according to Dad, despite the obvious similarities. The young man’s path and status as one of the country’s top high school defensive back recruits were crafted by RJ.

But sharing a name, not to mention a calling, could come with its own set of unrealistic expectations and pressures. Legacies have a lot to live up to in the eyes of many. They also become targets, as jealousy and resentment from the outside world rear their ugly heads.

Ray understood the pitfalls. He was ready for the external pressure. He wasn’t about to let it impact his son. “I wouldn’t allow that to happen. He grew up comfortable playing the game because he loved and enjoyed playing it. I wouldn’t allow that pressure to be on him that he had to be as good as me. I never allowed anyone to put that pressure on him, and I never did. I wanted him to have fun.”

RJ exudes an ease and balance when discussing his growth as a football player and person. There’s no doubt he wants to be great, and his high school achievements are obvious. In the past four years on Carroll’s varsity — quite a feat in itself in a program as steeped in accolades as Carroll’s — RJ has tallied nearly 200 tackles to go along with seven interceptions, seven forced fumbles and 29 deflections.

For good measure, he has spent time on the other side of the ball at wide receiver. Over the past two seasons, he’s scored 12 touchdowns and amassed almost 1,000 yards receiving. As a junior, he was named the District 5-6A Utility Player of the Year.

“He’s been on varsity for four years and he brings a lot of seasoned leadership to our program.”

On defense is where RJ has made his mark, much as his dad did three decades ago. Despite both being defensive backs, there are differences. Ray was 5 foot 8 and a speed demon. RJ is listed at 6 foot 1 and 188 pounds. Ray says his son’s playing style reminds him of his former New York Jets teammate Marcus Coleman, who at 6-2 played 11 years in the NFL.

Much like his father, RJ is a true student of the game. He broke down film and technique with his dad early in his Dragons career, but RJ mainly does such study on his own now. Ray is totally fine with that. Again, it’s about RJ making his own mark.

“I wanted to coach him when he was in youth football and I wanted to teach him things as he grows up, but now it’s really more for someone else to do that,” Ray says. “Not that I don’t know — I know a lot — but it’s better that someone else do that now.”

Considered by some recruiting services to be the top senior safety in the country, RJ doesn’t shy away from the attention. For a ball-hawking defensive back, shyness is not a virtue. He’s on an island being attacked on every play in this pass-happy football universe.

Just getting in this position is a dream for so many kids who pick up a ball with hopes of glory. RJ doesn’t take any of his success for granted.

“I kind of hoped for it, prayed for it a lot. I wouldn’t say I expected it. I knew God’s will and just what I put forth into it. I knew that time would tell.”

RJ made news in early April when he announced his college commitment to Clemson. Deciding to take his talents to the defending national champions ended an intense and overwhelming recruiting process that included many of the country’s elite programs.

“I actually liked it to start off, but the pressure did get to me and I didn’t want to keep doing it,” RJ says of the recruiting circuit. “I knew where I wanted to go and I had my mind made up, so I went ahead and committed.”

For Dad, being a part of his son’s recruitment proved more enjoyable.

“It’s an experience I couldn’t pay any amount of money to be a part of,” Ray says. “It was nostalgia. It’s an experience that you can’t buy to go to all of the universities that are historic. I wasn’t recruited like this.”

The football purist in Ray was in heaven on trips to places such as Notre Dame, Southern Cal and Ohio State. (Ray’s alma mater made a late push under first-year coach Jimbo Fisher, but the Aggies were too far behind. RJ never connected with previous A&M coach Kevin Sumlin.) Ray also made sure the visits were all about his son.

“I made sure they focused on him because sometimes the conversations went in my direction and I had to redirect them back to him,” Ray says.

Before he suits up for the Tigers, RJ has one last go-round with the Dragons. The expectations, as always, are high. Carroll is coming off a 13-1 season and a trip to the regional finals.

The season won’t kick off for RJ on Aug. 30 against South Grand Prairie. He’s expected to miss the three nondistrict games and maybe a game or two of District 5-6A action while he recovers from a broken foot suffered at the end of last season.

“He will be able to contribute in a big way while he’s out,” Dodge says. “He will be a vocal guy on and off the field and help other young guys to step up to the occasion.”

RJ can’t believe it’s down to his last year. “Time just went by so fast,” he says. Several games stand out for both Mickens men when they look back on the first three years of varsity play. Ray recalls the first time RJ got on the field as a freshman, his first career interception — against Flower Mound High — and games against DeSoto. RJ’s favorite memory is going into “takeover mode” against Arlington High as a sophomore, as teammates went down to injury and his pick-6 turned the game around.

“I just knew it was time for someone to step up and make a play,” he says.

The defeats also leave an impression. RJ recounts a regional final loss to Waco Midway in 2017. The Dragons were down 21-0 early before rallying to tie it on his touchdown catch in the third quarter. The Dragons would eventually fall, a fate not lost on RJ.

“With all the passion and love for the game, it’s still just a game. You’ve got to keep your head in the game. You can’t let your emotions get the best of you when things aren’t going your way. That’s something I’ve stood by the whole time I’ve been playing.”

As for his final high school lap, one goal remains unfulfilled. He’s done the individual thing. College is set. It’s not time to smell the roses. There’s still plenty left to do.

“It’s surreal to see so how far I’ve come, the people, the relationships and everything. I’m definitely taking every moment in. Knowing that we have a lot at stake in my last year. State championships for my class have always been something that we want to accomplish.”