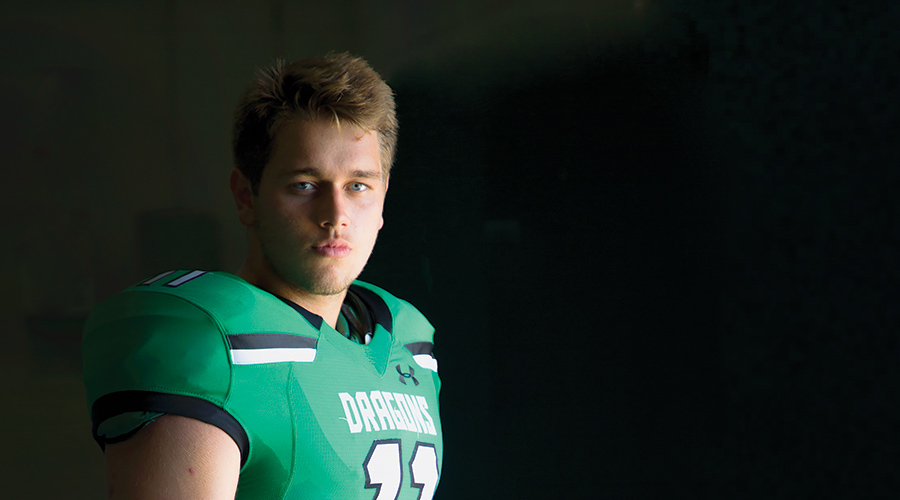 After an injury squashed his quarterback dreams, Blake Smith has grown, literally and figuratively, into one of the top tight end prospects in the state.

Of this Carroll football outfit, Blake Smith might best exemplify that daring concept of change.

The youngest of three siblings, he grew up the baby of the family, and though he’ll never be able to reverse birth order, the term “baby” seems to no longer fit.

He is far from those original 9 pounds or so.

Smith also has grown into a Football Bowl Subdivision, Division I tight end. That’s a far cry from his ambition of following in the epic footsteps of Chase Daniel, Greg McElroy, et al.

It was at quarterback that he intended to play when he walked on campus three years ago.

He broke an elbow entering his sophomore year and missed the season. He fell behind on the depth chart.

If it wasn’t meant to be at quarterback, he wanted an opportunity to help his team.

“I went into the coaches’ office and wanted a chance to play,” Smith says, recalling that fateful meeting with coach Riley Dodge and his staff. “I wanted to be put in a position where I can help the team.”

That meeting and the subsequent decision to move him to tight end have made a sizable difference in his life.

Smith went from unrecruited a year ago — no, eight months ago — to highly sought after.

“Coaches had contacted me and my head coach,” Smith says. “From a three-month span, I’d say from March to May, they just started rolling in.

“It was really special. I didn’t expect all this to happen, but it’s a real blessing to have all of this.”

During the first week of June, he announced on Twitter that Texas A&M had won this pitched recruiting battle.

“The program they’ve got building down there and the coaching staff, I felt comfortable,” Smith says. “It was home away from home. I went there twice in a month and fell in love with it.”

What appealed to college coaches was Smith’s size and versatility. He also has good, soft hands. He won’t catch a lot of balls in Carroll’s spread offense, which doesn’t look for the tight end often, but he’s more than capable.

You won’t find that combination on just any recruiting buffet.

Once he knew his new position, he made the weight room a regular stop.

“I knew I had to get stronger,” Smith says. “I didn’t really understand the physicality part. But once we got deeper in the playoffs, we were seeing bigger and stronger people out there.”

Committing to Texas A&M was no doubt exciting, but there is unfinished business to attend to first.

Carroll is coming off a 13-1 season, its only loss a disappointing defeat in the Class 6A Division I regional finals.

The Dragons then lost a hunk of offensive production to graduation.

Smith entered fall camp as one of 11 returning starters. He was an all-district tight end, though he did play some quarterback last season. The starter under center is expected to be sophomore Quinn Ewers, a confident young quarterback and very good athlete.

But, in essence, the Dragons will have two quarterbacks out there, and that’s invaluable, especially for such a young quarterback who has never taken a snap at this level.

“Blake is a great teammate,” says linebacker Preston Forney. “He’ll have a huge role in our offense. He’ll bring a quarterbacking mindset, leadership role. I think Quinn will be a good leader, but at the end of the day, it’s still hard [for a sophomore] to get out of their comfort zone and lead, even though I think he is going to do that. It will help having Blake there in the huddle and on the field. They will be a really good duo for our offense.”

At Carroll, a state championship is always on the radar. After all, eight state titles make a culture.

That’s something that will never change.