A sanctuary in the woods 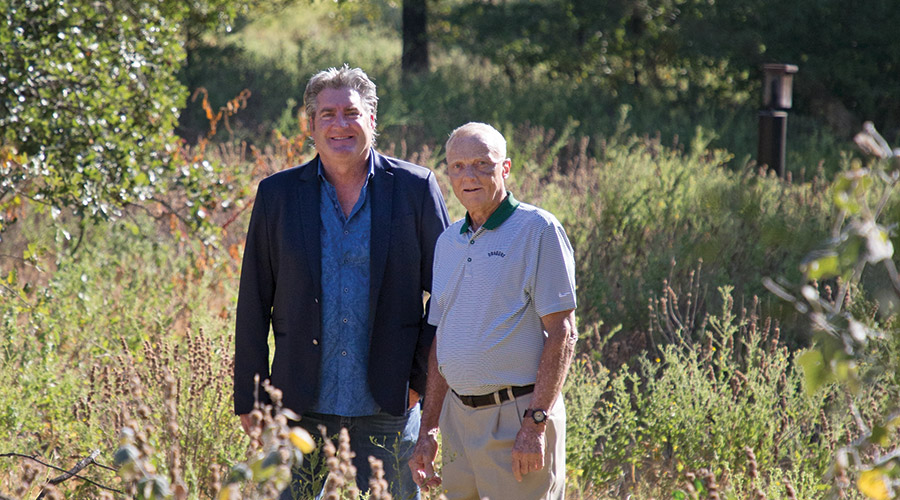 Two Southlake residents are working behind the scenes with the hope of building a special place at the  Bob Jones Nature Center and Preserve.

Tim Shiner envisions a place where young couples wed in the woods, where hikers pause to pray or reflect, where loved ones gather to say goodbye.

Shiner wants to see the Southlake Sanctuary, as he calls it, built at Bob Jones Nature Center and Preserve, a sprawling 760-acre tract of native Cross Timbers habitat and 20 miles of hiking trails. The preserve sits next to Bob Jones Park, in between Texas 114 and Grapevine Lake.

“What a beautiful place for a nondenominational sanctuary,” Shiner says. “Southlake already has so much going for it. This would be one more crown jewel.”

For Shiner, the sanctuary is personal. Years ago, his father moved from Chicago to Southlake, where he volunteered as a master composter at Bob Jones Park.

“My dad was the kind of man who would move to a new place, find a church first and a house second,” says Shiner, a longtime homeowner and businessman in Southlake. “He loved it here.”

A bench and stone now memorialize his father along a walking path in the preserve, but Shiner wanted to do more. So he turned to John Slocum, who served alongside him on the board of the nature center and preserve, for help. Slocum, who has served in numerous civic roles, was well-versed in city operations.

To gather background, the two men traveled to Arkansas, which is home to the breathtaking Thorncrown Chapel outside of Eureka Springs. The chapel rises 48 feet high, and contains 425 windows and 6,000 square feet of glass. More than 6 million people have visited the sanctuary in the woods since it opened in 1980. 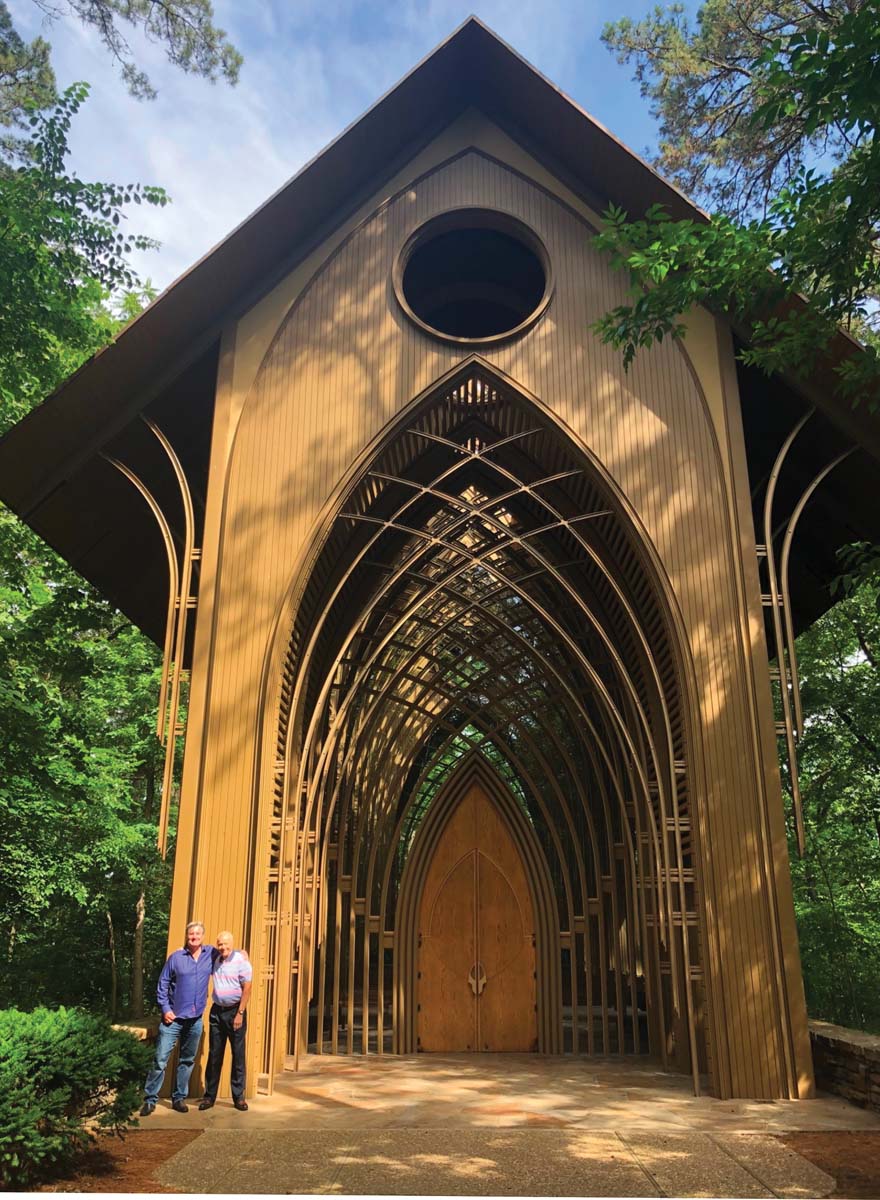 Shiner and Slocum visited the Thorncrown Chapel in Arkansas for ideas.
Photo courtesy of Tim Shiner 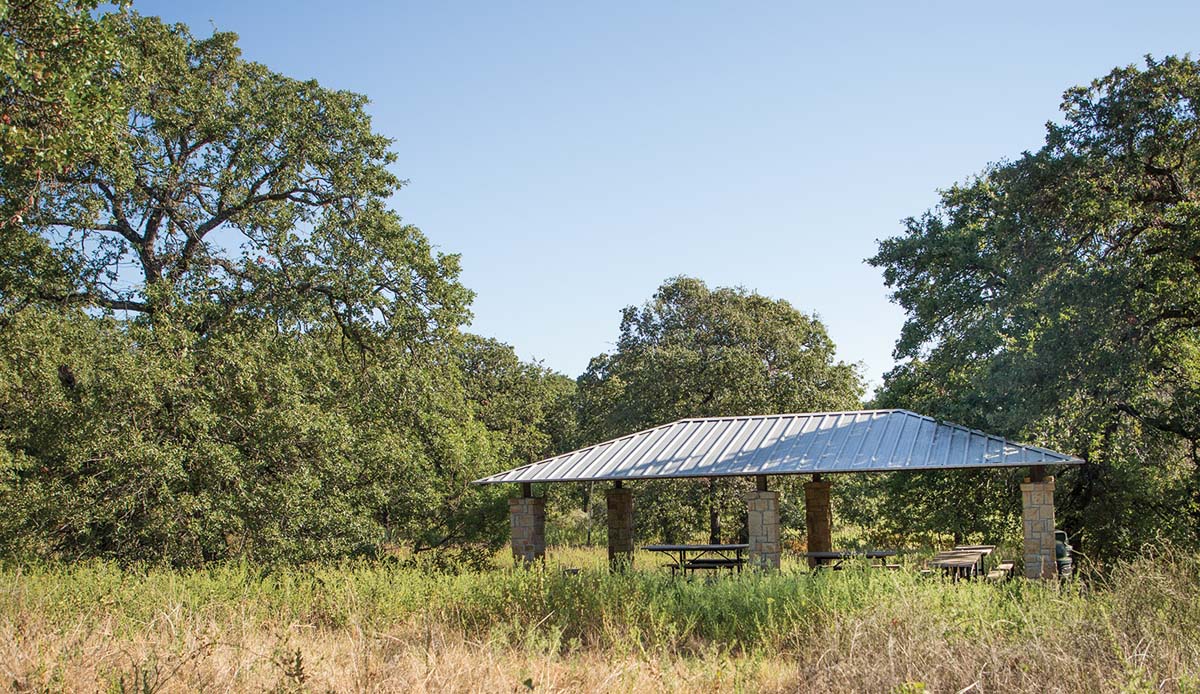 A wooded area of the nature center and preserve offers a prime location for a similar chapel, the men say.

The park and preserve are named after John Dolford “Bob” Jones, a former slave and sheepherder who purchased a 60-acre farm with his brother and mother after the Civil War. Over time, Jones, his wife, Almeady Chisum, and their 10 children expanded the farm to 2,000 acres.

The city of Southlake began purchasing the land for the park in the 1990s. Today, Bob Jones Park is home to a nature center, hiking trails, a fishing pond, a dog park and softball and soccer fields. The nature center and preserve features an educational center and 20 miles of walking trails that cut through the heavily wooded area.

As part of their research, Shiner and Slocum consulted with the architect of Thorncrown, who provided initial drawings.

The men presented the idea for a sanctuary to the city’s 2035 Corridor Planning Committee, which serves as an advisory board to the City Council. While the committee was impressed with the building’s architecture, it noted that the city is not in the position to fund the project or operate the facility, a spokeswoman for the city of Southlake says. The city would need to conduct a long-term study to determine whether a sanctuary would be an appropriate use of the land, she says.

Shiner and Slocum are working to recruit donors in hopes of creating a public-private partnership.

“This could be a legacy piece for people of our generation,” Shiner says. “This is a way we could give back to Southlake and future generations.”

Depending on the complexity of the structure, the sanctuary would cost an estimated $2 million to $4 million, Shiner says. Ultimately, the chapel could provide a revenue stream for the nature center, he adds. Anyone could book the sanctuary for an event, but he wants Southlake residents to receive a discount.

With easy access to DFW Airport and proximity to numerous Southlake-area hotels and surrounding cities, Slocum says the sanctuary would have no trouble drawing visitors.

“Being located right in the middle of a major metropolitan area would be a major selling point,” Slocum says. “The logistics are already in place for this to be a success.”

The park and preserve offer an opportunity to create something memorable in Southlake, Shiner says. “Southlake has grown so much. One of the last big canvases to paint on in our city is Bob Jones Nature Center and Preserve. If we have the chance to do something great, why wouldn’t we?”