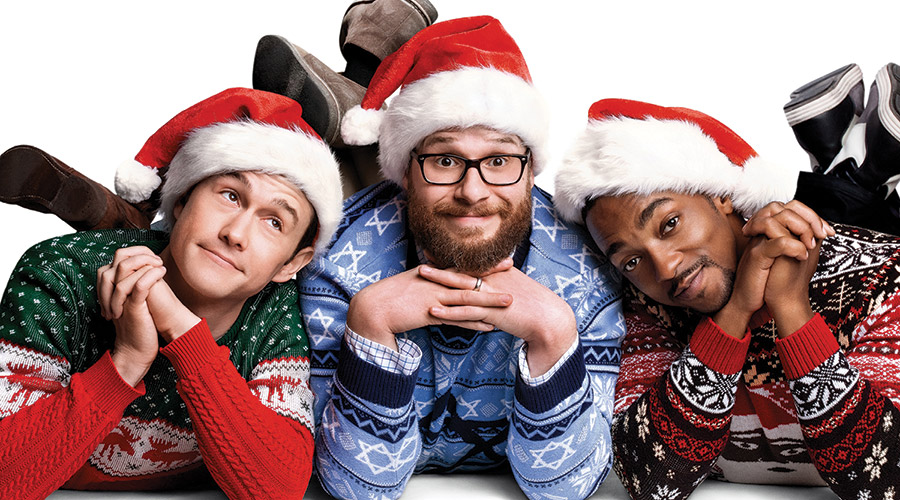 While we give her a nod with some classics, this is not your grandmother’s list of favorite holiday-themed movies.

Debates have been raging for years about the best Christmas movies, with most opinions tied to personal preference instead of cinematic excellence.

Perhaps that’s why A Christmas Story is so popular but not on this list. Outside of the tongue-stuck-on-the-pole scene, it’s fairly pedestrian.

And it’s why Die Hard is among our top 10; Bruce Willis is the gift that keeps on killing in this Christmas action movie.

While we certainly appreciate some of the classics, this is not a traditional list, filled mostly with joyful moments and holiday cheer. We chose a few movies that venture outside the holiday box and made sure to include some Christmas fear.

So, whether you’re watching at home or heading out to special screenings at Southlake-area theaters, we hope you’ll enjoy our favorite holiday-themed movies this Christmas season.

The Night Before (2015) Seth Rogen brings his distinctive brand of comedy to Christmas in The Night Before, which follows three childhood friends (Rogen, Anthony Mackie and Joseph Gordon-Levitt) on their annual Christmas Eve romp through New York City. Typical of Rogen, it’s full of big laughs, especially from Michael Shannon as the gang’s enigmatic pot dealer, but is also an unexpectedly moving story about friendship and growing up.

Krampus (2015) When you’re tired of festive flicks, how about a little holiday terror instead? A family under siege by a Christmas demon struggles to overcome their dysfunctions in time to save not just Christmas, but their souls. This horror-comedy cuts its Christmas spirit with a memorably dark finale.

Bad Santa (2003) Easily the filthiest movie on this list, Bad Santa stars Billy Bob Thornton as a foul-mouthed mall Santa Claus who moonlights as a burglar. This black-hearted film offers far more laughs than seasonal cheer, but it’s a worthwhile and funny bit of counterprogramming.

Elf (2003) Will Ferrell earned his place in the holiday movie hall of fame with his enduringly charming performance as Buddy the Elf, Santa’s not-so-little helper who embarks on a journey to New York City to find his real dad (James Caan). This is one of the most purely likable movies on our list, with an all-time great ensemble: Caan, Ed Asner, Zooey Deschanel, Peter Dinklage, Mary Steenburgen, and the terrific Bob Newhart.

The Nightmare Before Christmas (1993) This is the rare double threat: a movie that’s equally watchable at Halloween and Christmas. Tim Burton’s animated tale about Jack Skellington, the King of Halloween Town, who hatches a plot to take over Christmas, is a delightfully macabre holiday-spanning classic.

Home Alone (1990) This holiday classic from Chris Columbus, following a young boy (Macaulay Culkin) who gets left behind when his family goes on Christmas vacation and is forced to booby-trap his house against robbers, gave an entire generation of moviegoers deeply unrealistic expectations about the durability of the human body. 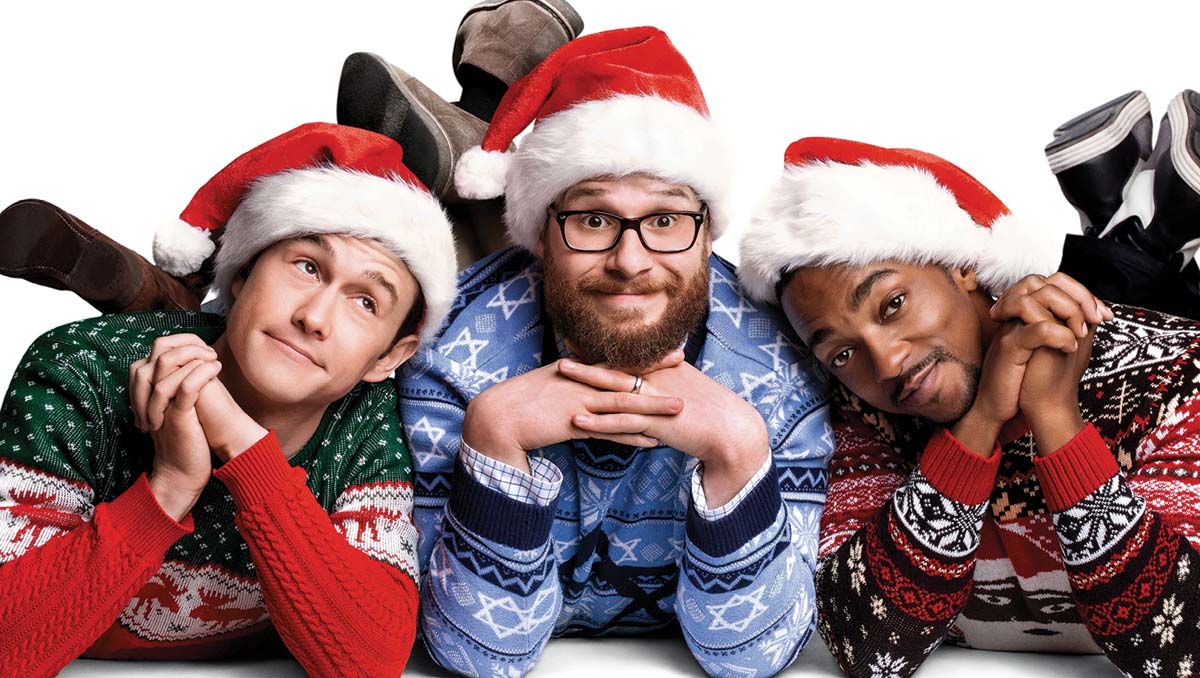 Joseph Gordon-Levitt, Seth Rogen and Anthony Mackie in The Night Before
Photo courtesy of Sony Pictures 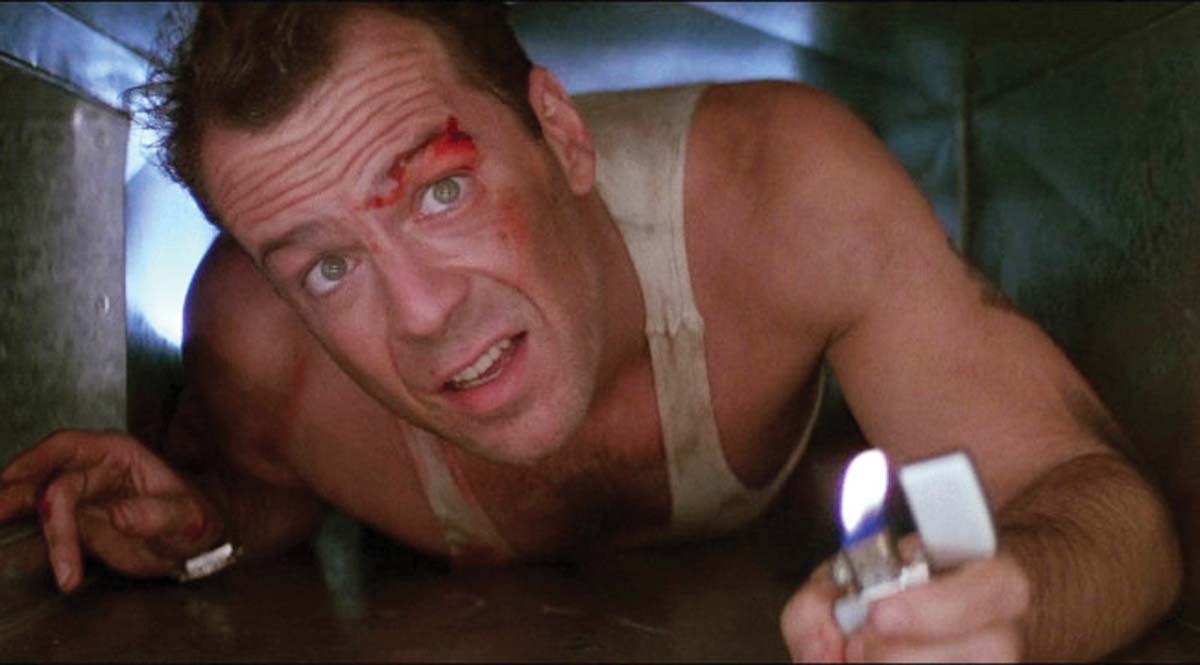 Die Hard (1988) Die Hard has the rare distinction of being both one of the best action movies and one of the best Christmas movies ever. If you put aside Bruce Willis’ role as survival-savvy NYPD cop John McClane, Alan Rickman’s standout villainous performance as Hans Gruber, and the various explosions and skyrocketing body count, what you have is a heartwarming story about a guy trying to spend Christmas with his kids.

How the Grinch Stole Christmas! (1966) One of the most enduring Christmas musicals of all time, this TV-movie special features Hollywood horror icon Boris Karloff as the voice of The Grinch, a green grump whose grudge against holiday glee leads him to try to steal Christmas. This animated classic has spawned a few feature-film adaptations, but none have topped the charm of the original.

White Christmas (1954) To cinephiles, White Christmas is most notable for being the first film released in the ultra-widescreen VistaVision format, but it’s also a holiday staple, featuring Bing Crosby and Danny Kaye as soldiers who become musical sensations after the war. Seeing Crosby perform the titular song is enough to make this a holiday classic, but the film is also romantic, touching and packed with great music.

It’s a Wonderful Life (1946) If there’s a Christmas movie purer of heart than It’s a Wonderful Life, we haven’t seen it. Jimmy Stewart’s performance as George Bailey, a man pulled back from the brink of suicide by an angel-in-training who shows him the upside of a lifetime spent helping others, is a master class in charm, and the movie is regarded as a classic that withstands the test of time.

Alex Williams is a graduate of Keller Central High School and the University of Texas at Austin film school and works for XYZ Films in Hollywood.

Movie theaters across North Texas offer special screenings of Christmas films during the holiday season. Grapevine’s Palace Theatre has an extensive movie menu this year, starting with Home Alone on Nov. 30 (and again on Dec. 20) and ending with The Holiday on Dec. 27. In between, you can catch such classics as A Christmas Carol, Miracle on 34th Street and Scrooged. Tickets are $6. Many shows sell out in advance, and tickets will go on sale Dec. 9. Call 817-410-3100 for details. Holiday perk: Bring a same-day receipt from any Grapevine restaurant and receive a free small popcorn. Find movie schedule at grapevinetexasusa.com/palace-theatre/movies.