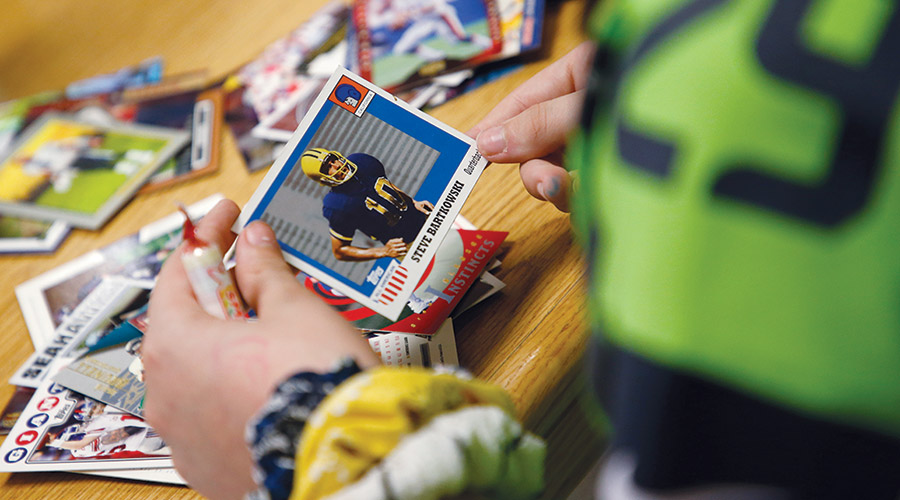 A pair of Southlake teachers incorporate fantasy football into their advanced math classes to apply numbers to real-world situations. But make no mistake, this is more than a numbers game in this football-crazed school.

Paige McDermott likes watching NFL games with her dad and isn’t the least bit concerned about figuring out fantasy football.

“So, I’m really good at spending money, so this is easy,” she says, pointing at her team’s roster on her laptop. “I’ve got Patrick Mahomes, Zeke Elliott, Alvin Kamara, Amari Cooper …”

“Oh, don’t worry, I can fix that,” says Paige, without sharing her strategy.

Paige plays fantasy football at Durham Intermediate School in Southlake, where a league formed by math teachers Lance Mangham and Chris Underwood is in its 12th year.

“I was in a Barnes & Noble one day and saw this book on how to incorporate fantasy football in your classroom,” Mangham says. “That’s how it started.”

It’s a game played online by millions in the U.S., where fans form leagues and draft teams for bragging rights and cash winnings.

math classes taught by Mangham and Underwood, who use fantasy football as part of their curriculum. Other math classes play for fun, and siblings, parents, school staff and every homeroom also have their own conferences. All told, there are 326 teams involved in the league.

While using fantasy football as a teaching tool is fun, it’s also practical.

“The biggest thing we’re doing is integrating math into real-world situations,” Mangham says. “And it’s better than giving them a worksheet and saying ‘Do these 20 problems.’ ” 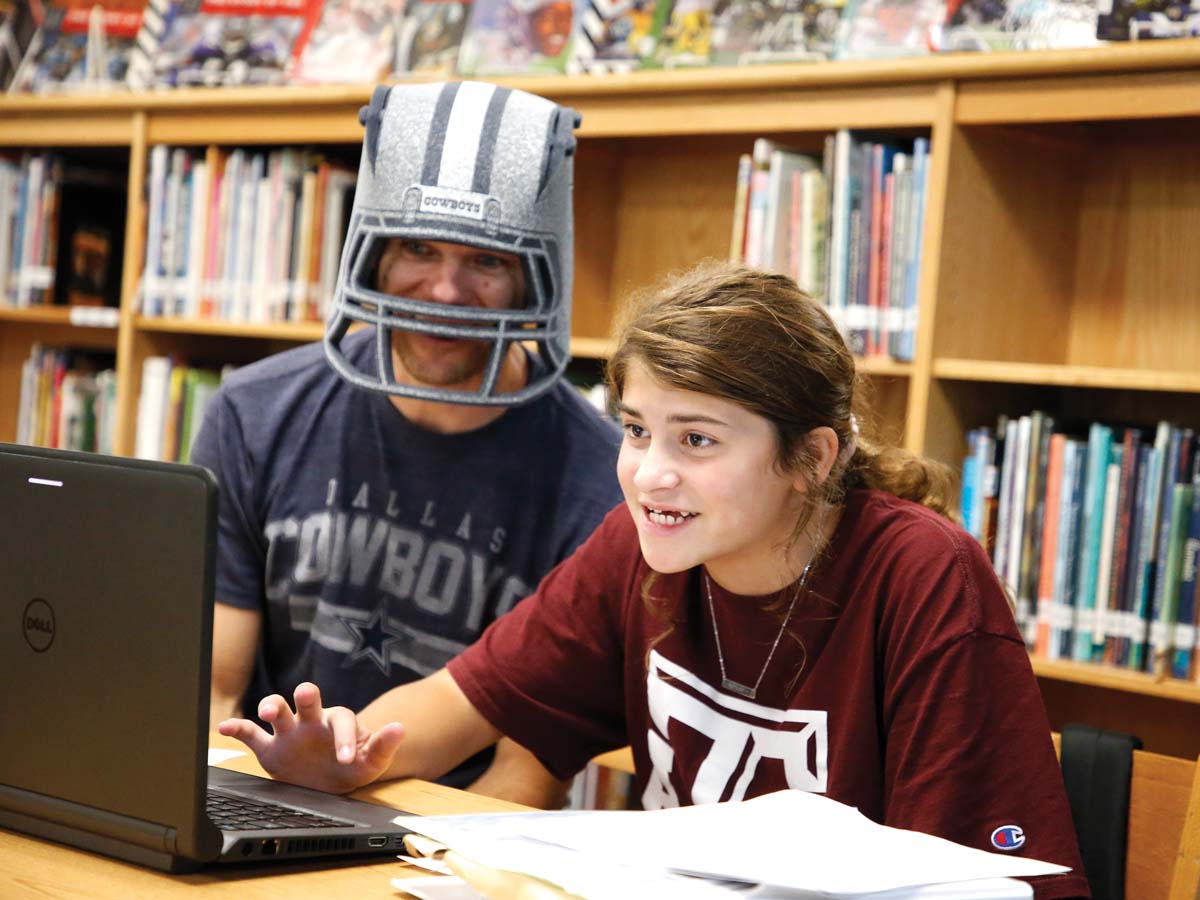 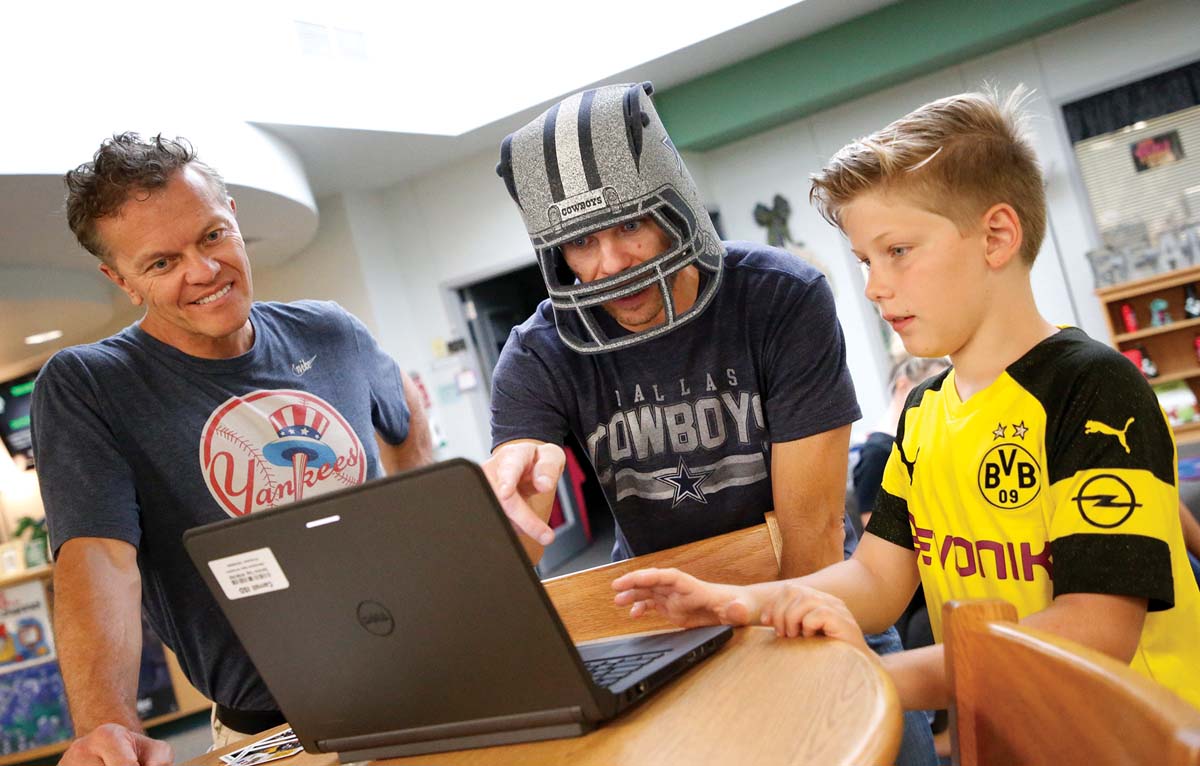 Mangham and Underwood have been teaching together for 20 years, and fantasy football is just one of their teaching tools; they also guide teams of students through a yearlong architecture design project.

The league kicked off in late August with a pre-draft party at Durham’s library and the teachers arrived in costume — Mangham wearing a Packers jersey and cheese head and Underwood a Cowboys helmet made of foam.

Some students wore jerseys and declared their football expertise; others scrambled to try to break the fantasy football code.

Tido Wencker was at the party with his dad, Detler, a native of Germany. They acknowledged that American football does not hold their sporting interest.

“I’d be a lot better at picking a team if it was soccer,” said Tido, 11, sporting a yellow Borussia Dortmund — or BVB — jersey of his favorite team in Germany.

Jillian Hall and Blythe Woods, both 11, shared a table and their enthusiasm for the sport, both real and fantasy.

“I started being a football fan when my brother started playing Dragon football,” Jillian says.

In the fantasy realm, she was hesitant to draft Cowboys running back Zeke Elliott because he was still holding out at the time. “I’m pretty mad at him about that,” she says. Instead she was leaning toward the Giants’ Saquon Barkley, a supposed can’t-miss pick.

The version of the game played in the classroom is different from what the masses play in fantasy football leagues in the U.S. and Canada, where an estimated 47 million fans spend ridiculous amounts of time and money managing their teams.

In the Durham league, students spend play money and everything has a math component.

For starters, each student is given a budget of $80 million and a roster of about 200 NFL players, all of whom come with a listed salary, based on the previous year’s stats.

Mahomes had the highest price tag, at $13.5 million. A handful of running backs, wide receivers and tight ends were the cheapest dates, at $600,000.

Students are instructed to spend all of their money without going over budget. Difficult decisions are part of the game.

They select their teams and give them names — The Energetic Emus, Pink Fluffy Unicorns, Me and My Mahomies and Dunder Mifflin Paper Company (from The Office) are among our favorites — and then the work begins.

It’s a little slow in the beginning, Mangham says, “because teaching them how to score is a little complicated.”

Each week brings a standing homework assignment. Students grab their laptop and go to manghammath.com or mrunderwood.com to print out their team’s score sheet, then visit espn.com to find out how many points their players scored and record them. A part of Wednesday’s class time is spent going over the score sheets, and each week features a special lesson, including integers, fractions, one- and two-step equations, and rates and proportions. 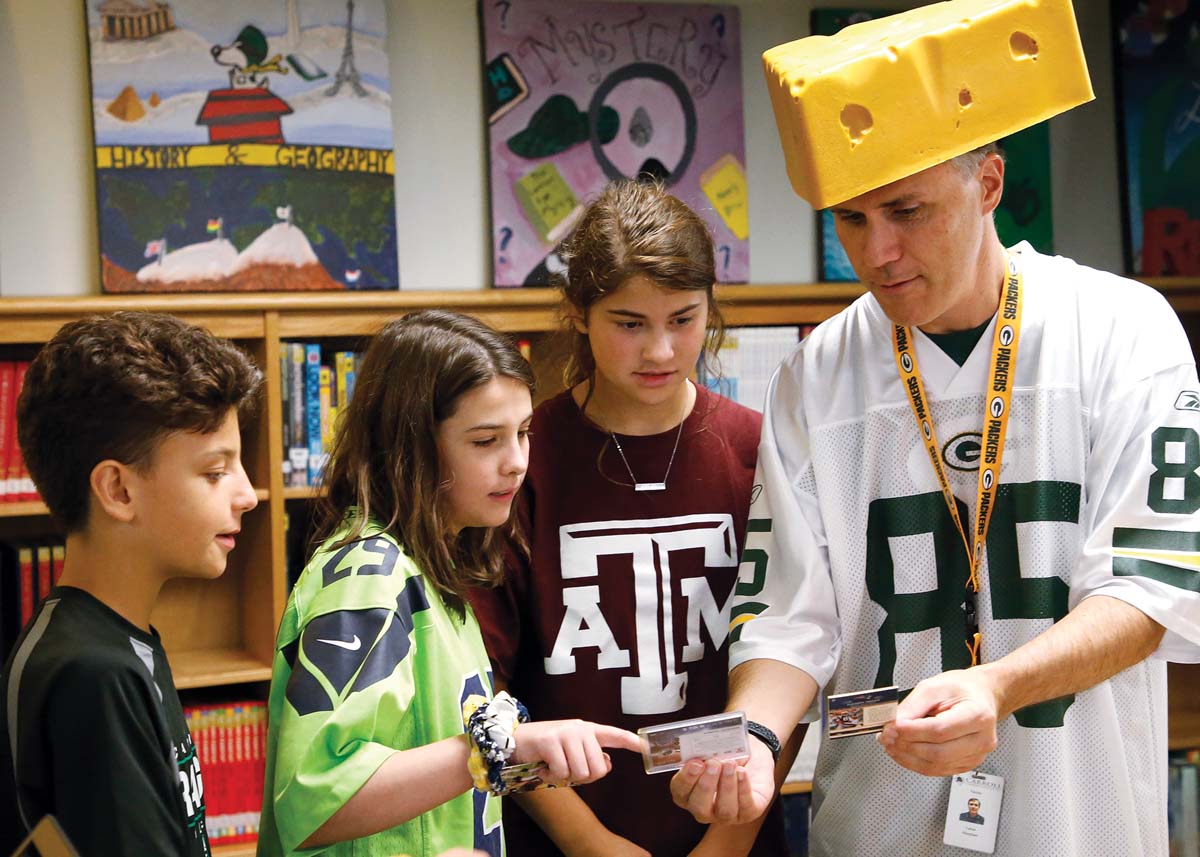 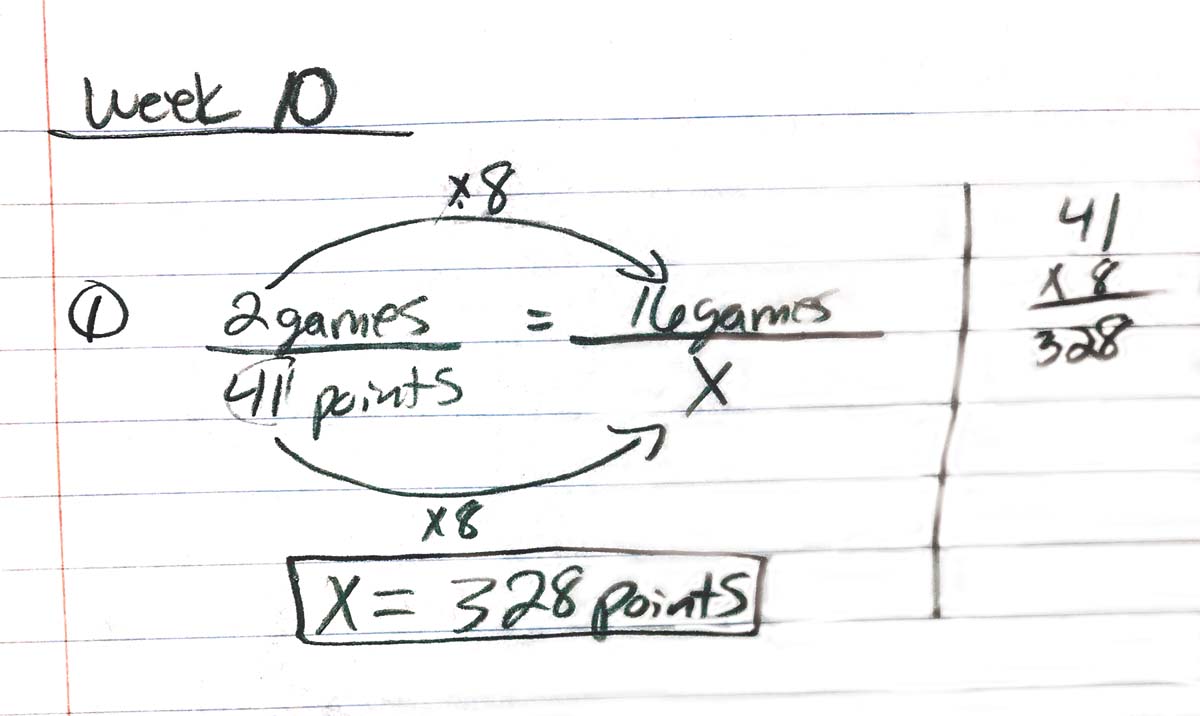 Each student plays every other student in their class, or conference, each week, and winners are given prizes, such as football cards. Playoffs are held late in the regular season, with winners taking home trophies purchased by Durham’s PTO. There’s also a championship game — called the Toilet Bowl — for the league’s two worst teams, and the trophy is, fittingly, a football player sitting on a john.

Underwood says students who know a lot about football don’t necessarily have an advantage, and he admits that “not everyone is gung-ho about it at the start of the school year.”

But over time, he says, students embrace their teams and “get the big buy-in. They take ownership and understand that ‘this is my team,’ ” Underwood says.

As far as Paige’s team goes, she dumped most of the big names on her roster and was able to make budget, but she discovered in

Week 2 the true meaning of being a team owner.

Both of her quarterbacks were sidelined — the Jets’ Sam Darnold with mononucleosis and the Saints’ Drew Brees with a busted thumb — and because the league’s supplemental draft (to replace injured or ineffective players) was weeks away, Paige’s team was hurting.

“Sometimes things don’t go your way,” Underwood says. “But I told her, ‘Guess what? You’ve got less math to do.’ ”