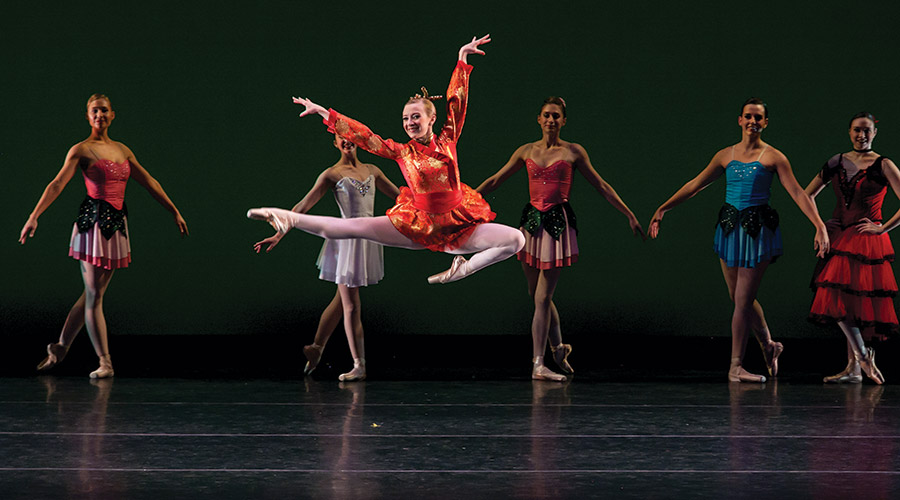 Avant Chamber Ballet will perform Nutcracker: Short and Suite, a condensed version of the holiday favorite, for the fifth straight year at White’s Chapel United Methodist Church in Southlake.

From an enchanting Christmas party to a magical snow scene, dancing candy canes to waltzing flowers, The Nutcracker is a holiday favorite for so many reasons. Avant Chamber Ballet makes it even more accessible for busy families by bringing a special version to Southlake that condenses the storytelling.

The Dallas-based ballet company returns to White’s Chapel United Methodist Church on Nov. 21 to perform its fifth annual Nutcracker: Short and Suite, accompanied by live music. “It’s everyone’s favorite pieces of music and sections of choreography,” says ACB artistic director Katie Cooper. “Every year we change it a little bit, update the costumes, change the choreography. This year we’ll do it with a string quartet; it’s really a beautiful arrangement that fills out Tchaikovsky’s score.”

Skipping portions of the party and battle scenes speeds up the ballet’s progression so that the performance lasts just over an hour. Yet Nutcracker: Short and Suite hits all the high points, especially the variations from the second act, in which the most vibrant dancing happens. The formula keeps even the youngest audience members’ attention, and brings them back annually, as the production, held the Thursday before Thanksgiving, has become a Southlake tradition.

“It’s been extremely popular to be able to come see our show at a really reasonable ticket price without having to drive the whole family to Dallas to see the production,” Cooper says. “We’re bringing our Nutcracker straight to them.”

“I had a group of dancer friends and musician friends who were excited about the idea of doing a project together,” she says. “Nobody in DFW was doing what we were doing during the recession. Everyone cut using live music, but we’ve always made it a priority.”

The White’s Chapel sanctuary is a natural fit for Nutcracker: Short and Suite; it seats up to 2,400 people and was built to accommodate the church’s orchestra and choirs, as well as large-scale in-house productions created for Christmas and Easter. Apex Arts League, which brings ACB to Southlake, also regularly presents programs at the church featuring the Fort Worth Symphony Orchestra and chamber music groups. Church liaison Tracy Christensen estimates that White’s Chapel hosts as many as 75 outside concerts each year, from piano recitals to major productions. Co-pastors John McKellar and Todd Renner share the mindset that the church should be open to the community. “It brings a lot of people into our space,” Christensen says.

White’s Chapel United Methodist Church The church presents its Christmas Experience, telling the Christmas story through music and dance and featuring its own choir and orchestra, Dec. 14-15. For more information, whiteschapelumc.com.

• Apex Arts League brings the Fort Worth Symphony Orchestra to White’s Chapel for the Sounds of the Season performance Dec. 19. For more information, apexartsleague.com.