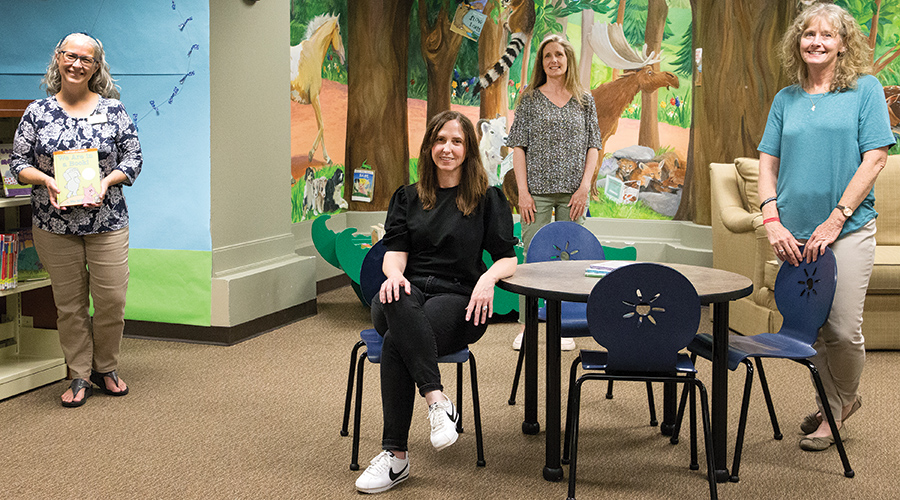 The staffers at the Southlake Public Library get creative to serve their clients.

The Southlake Public Library is, by design, an inviting community hub — no institutional vibe or stereotypical shushing to be found. Open since September 2001, the library is staffed by employees hired for their expertise and their friendliness. The library offers creature comforts like a free coffee station and a reading room with throw blankets. 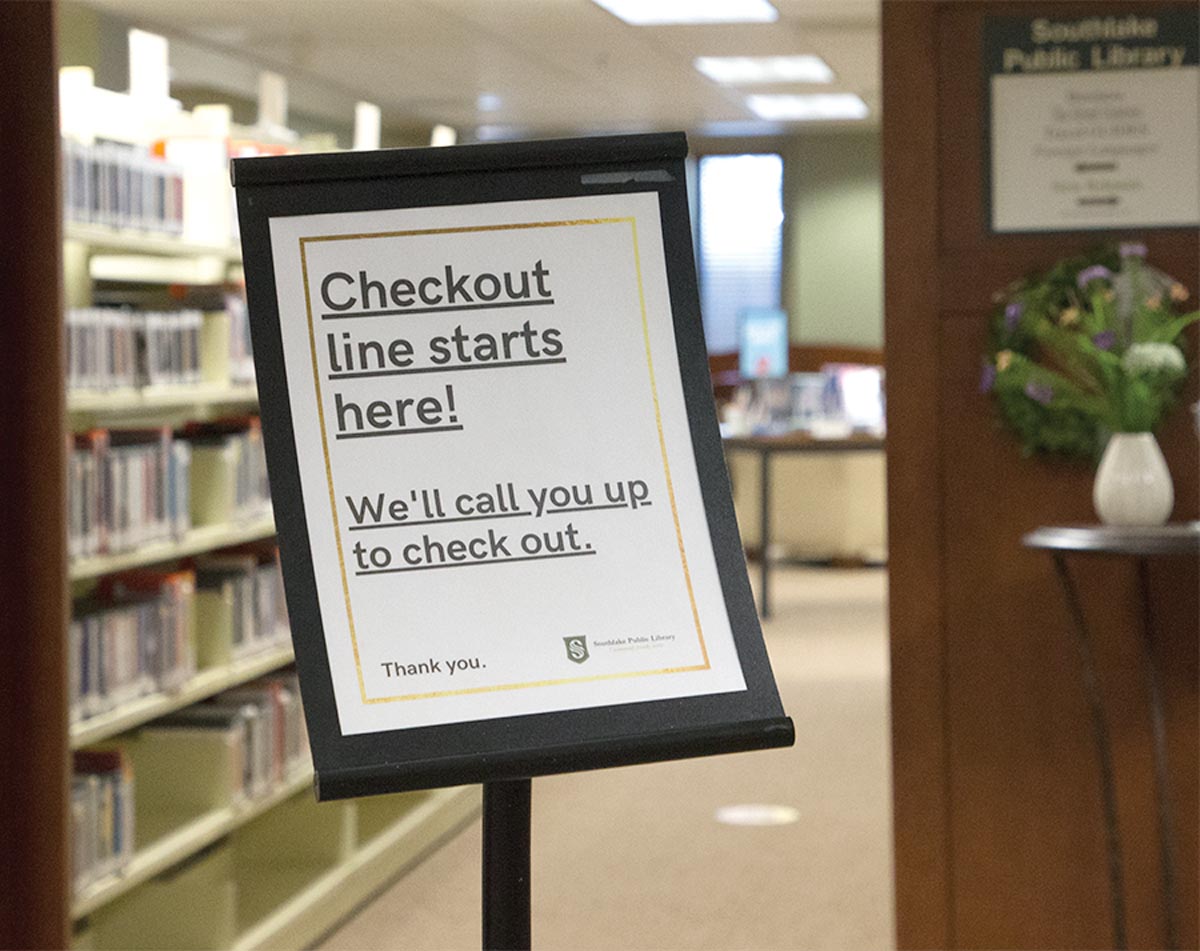 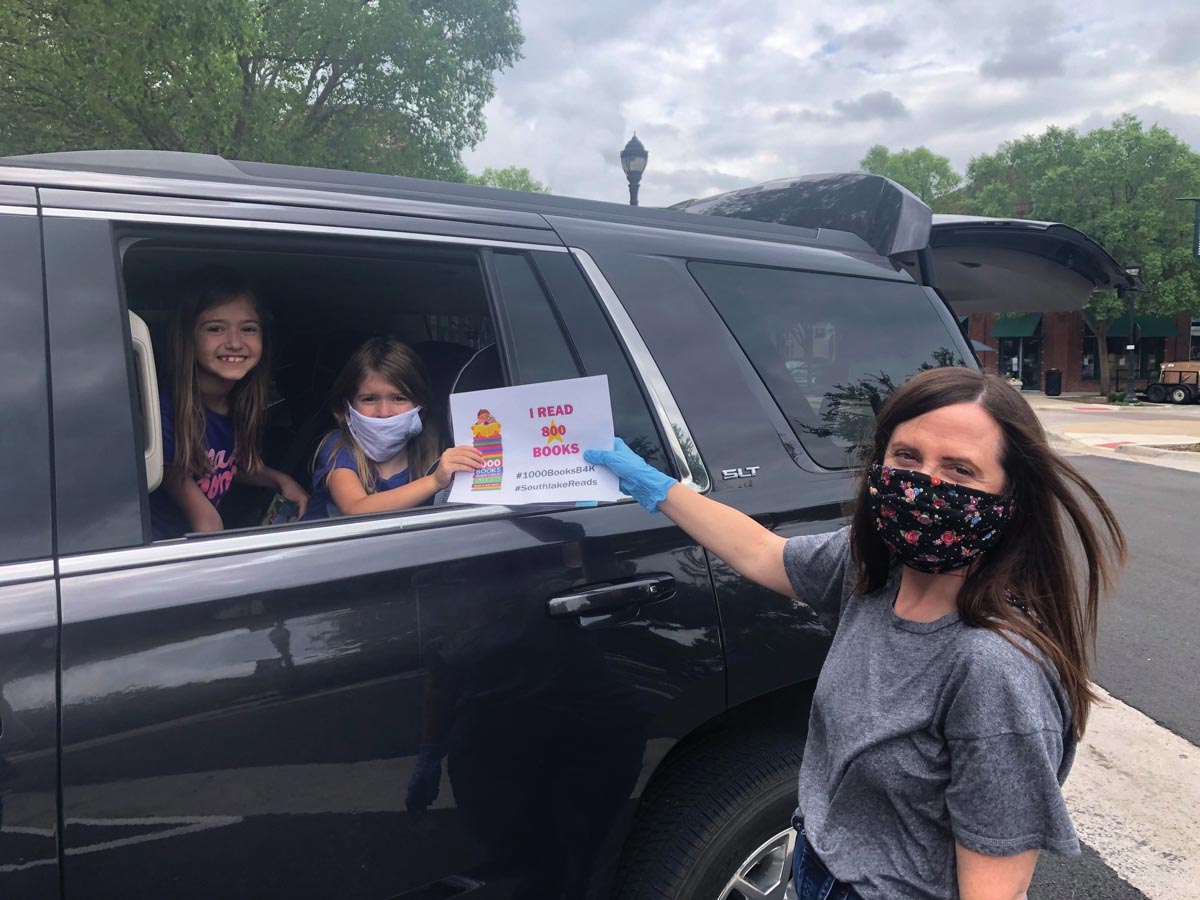 Librarian Stacy Wells awards a participant in the “1,000 Books Before Kindergarten” challenge a certificate for reading her 800th book. Parents can participate by reading to their newborn, infant or toddler (yes, you can repeat titles). Every 100 readings is saluted with a certificate and a sticker. Reach 1,000: You get to the ring what the library calls THE BIG BELL.

In a stroke of genius any parent can appreciate, the children’s section has soft music playing that makes it less obvious when little ones express themselves. The 10,400-square-foot space tucked into the first floor of Southlake Town Hall houses a collection of some 40,000 print items, with special sections for children and teens, plus communal tables, individual desks and cozy leather chairs. It’s no wonder locals love to stay awhile, whether they’re participating in one of the library’s many programs, studying, working remotely or just settling down with the latest novel (the staff is currently buzzing about the new thriller Saint X by Alexis Schaitkin).

Because the in-person experience has always been this particular library’s strength, when the pandemic forced the facility to temporarily close in mid-March, city librarian Cynthia Pfledderer says that the staff had to quickly figure out very different ways of doing things.

The first challenge was getting materials to patrons; print circulation accounts for some 90 percent of this library’s loans, with digital just 10 percent. Fortunately, the library had joined into a partnership with more than 20 Texas public libraries a couple of years ago, which increased its digital collection of 2,400 items to make more than 130,000 items available.

Perhaps an even bigger challenge was to transition its robust in-person programming schedule, ranging from children’s story times to adult crafting sessions, to an online format.

“Social media had always been a very small part of what we did, and it became our primary way of connecting with the citizens,” says Pfledderer. “It’s been interesting to watch our team, a very modest group, now being asked to put themselves out there in very different ways than they were used to. 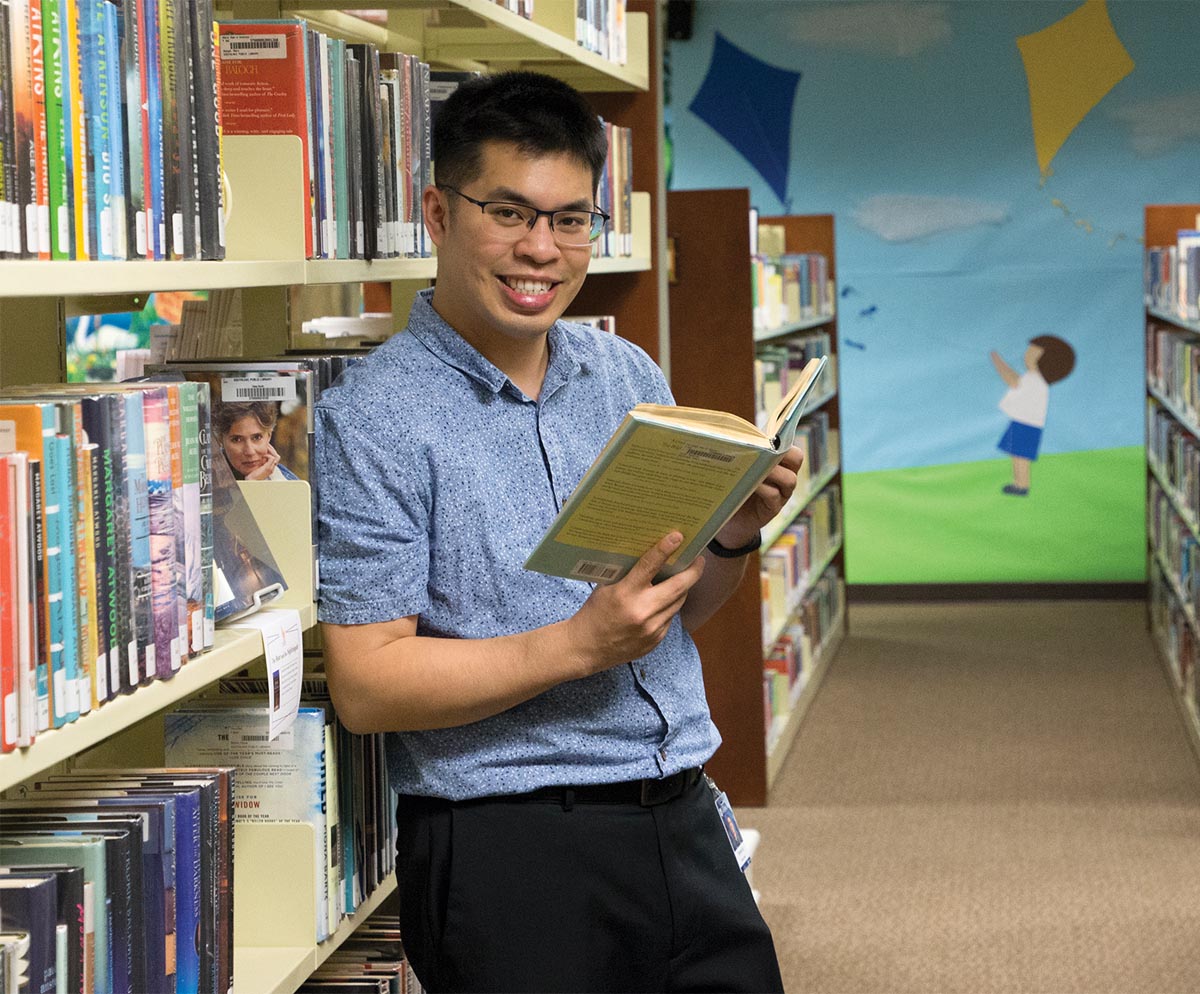 Vernon Ip Library clerk
The library’s resident Disney fan, Vernon offers snappy virtual book reviews and adds his own twist using props. Yes, they refer to him as the V-IP. He has been with the library one year. 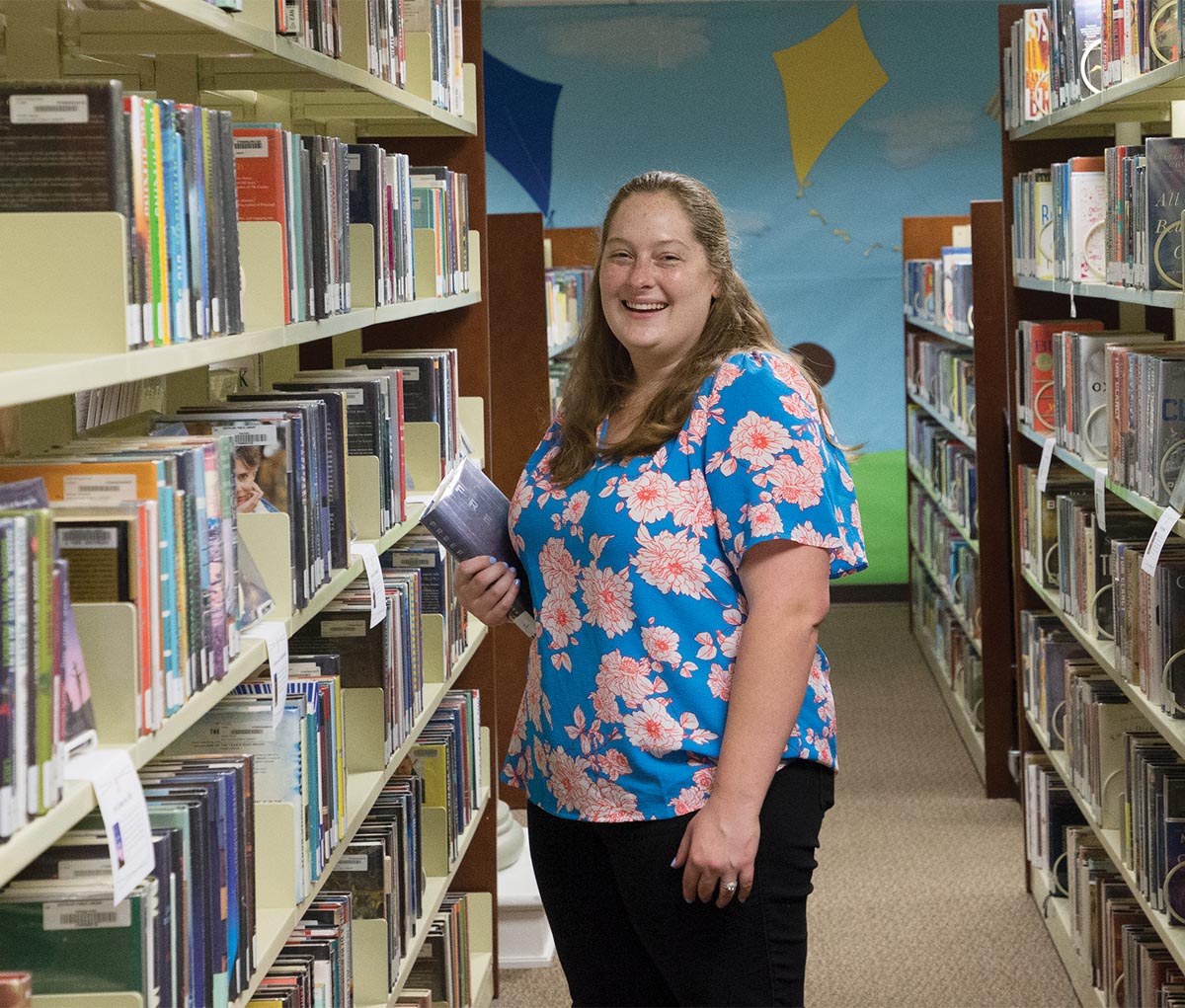 Rachel Girts Library clerk
Rachel is another of the library’s virtual book reviewers; she recently awarded Saint X,
a mystery thriller, five out of five stars. She has been with the library for one year.

I’m so incredibly proud that they did it with so much passion.”

The library’s Facebook and Instagram pages reveal a wide range of talents. Karen Jolley and Heidi Chupp have been streaming children’s story times on Tuesday and Wednesday mornings from their homes, sometimes with the help of a resident dog. Other staffers have come forward to offer cooking classes, poetry readings, book reviews and a popular mask-making workshop — to a very enthusiastic reception.

“Digital story times have made it to other countries,” says Pfledderer. “Normally a story time audience would be 50 to 100; now it’s reaching 1,500 people. We realize there’s an impact there we hadn’t anticipated, so we want to continue to offer things like that even after we reopen.”

Among the most popular posts is one where staffers took the Getty Museum Challenge, dressing up and using household items to re-create scenes from famous works of art.

By mid-May, the library was able to begin offering curbside service to restore access to its print collection, with returned items undergoing a 72-hour quarantine before being sanitized and officially checked back in. 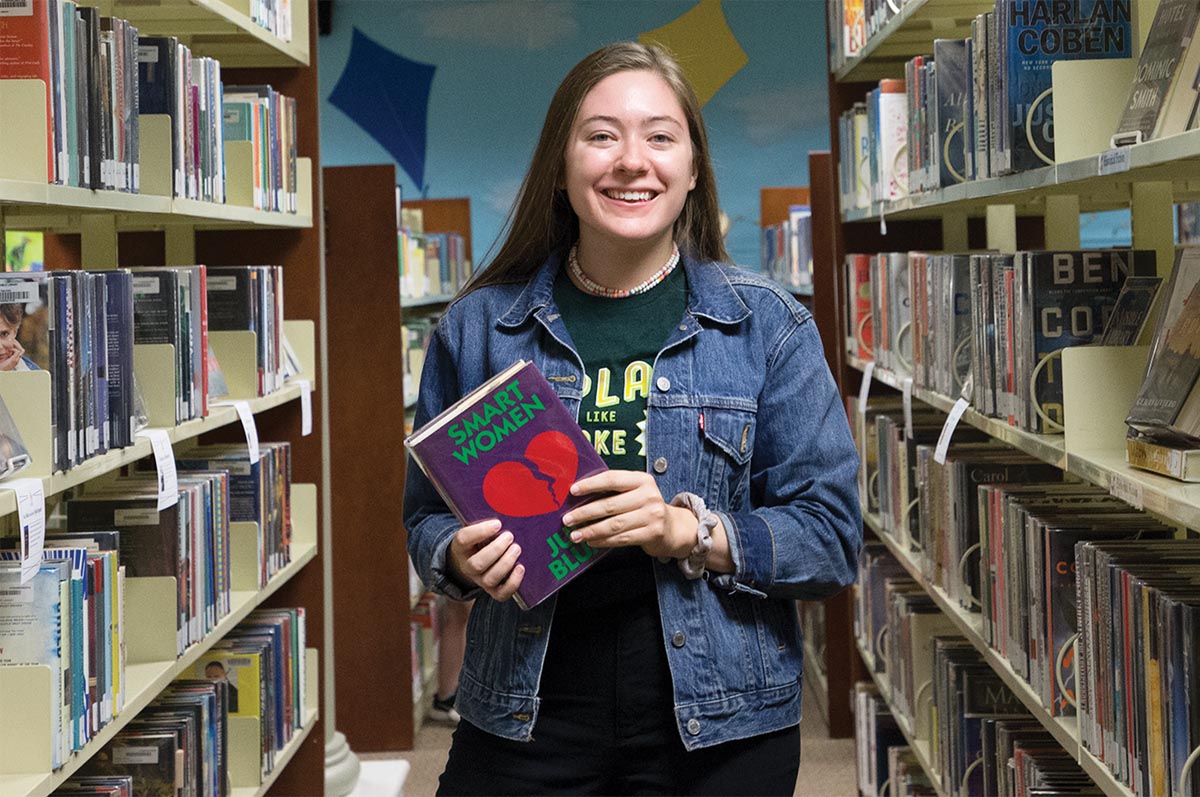 Abrianna Burton Library clerk
The library’s behind-the-scenes social media maven, Abrianna notes that all video posted on Facebook is shot on iPhones. Check out one in which she partnered with Amy for a virtual review of The Kiss Quotient — a bucket of water makes quite a splash. She has worked at the SPL for three years. 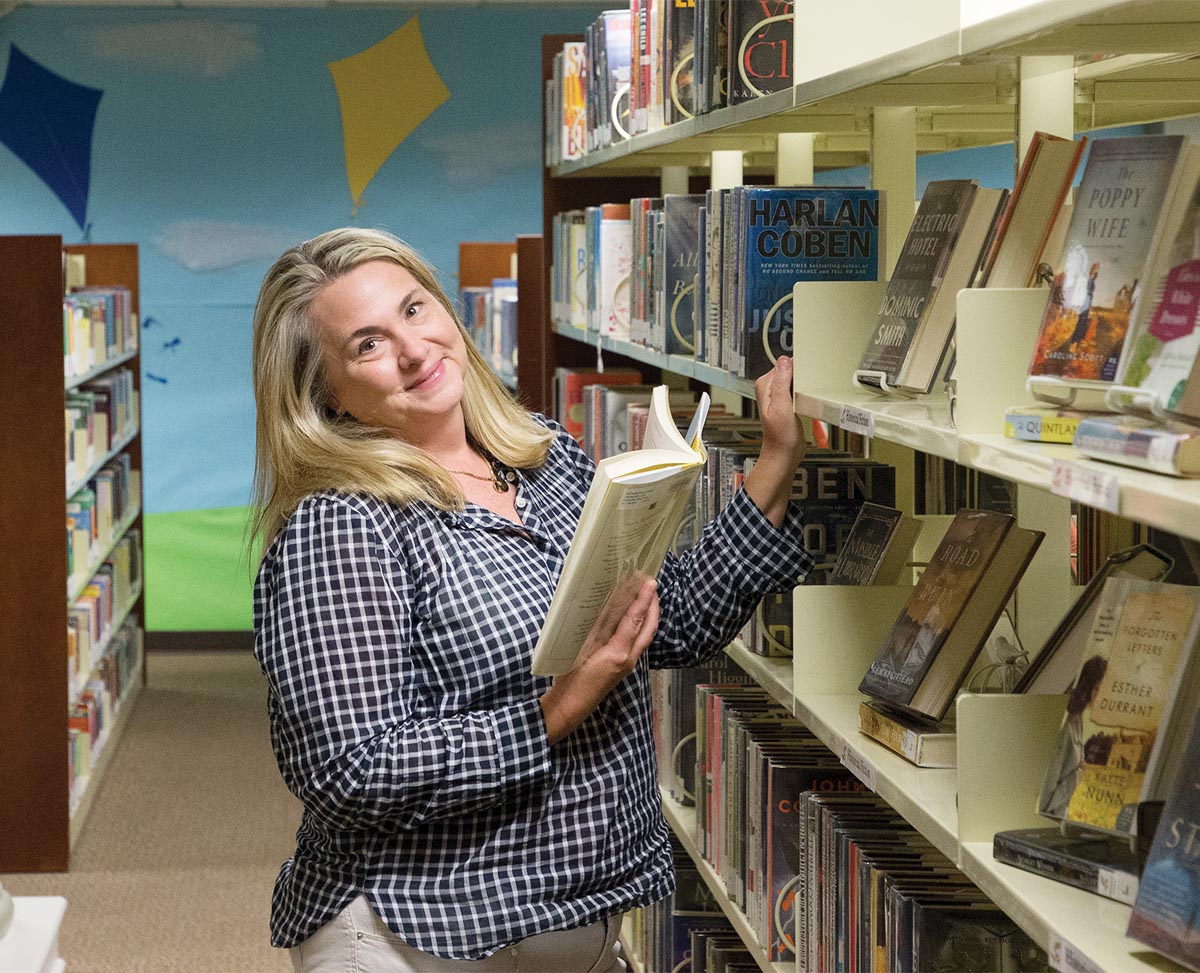 Amy Pearson Administrative secretary
Amy’s cooking videos feature recipes from books at the library (available to check out or download from SPL’s Cloud Library) as well as some of her personal favorites. She has been with the library for three months.

In late May, Pfledderer and staff began welcoming back the library’s 12,500 registered users in person. Of course, new policies will be in place as long as the pandemic continues — the coffee station and cozy blankets have been stored temporarily and safety shields are erected at the staff desk.

But the joy of perusing the carefully curated collection, purposefully organized into browsing stations that will lead readers to their next favorite book, is a welcome step toward normalcy.

Keeping its new broader audience in mind, Pfledderer says the library is applying for a grant with the hope of creating a studio to use for streaming creative programming for kids and adults alike.

“This is the first time what we do has been out there so much,” Pfledderer says. “Libraries have always been doing great things, we just never did them online; getting the work we do out in the community for more people to enjoy is not something we want to lose.” 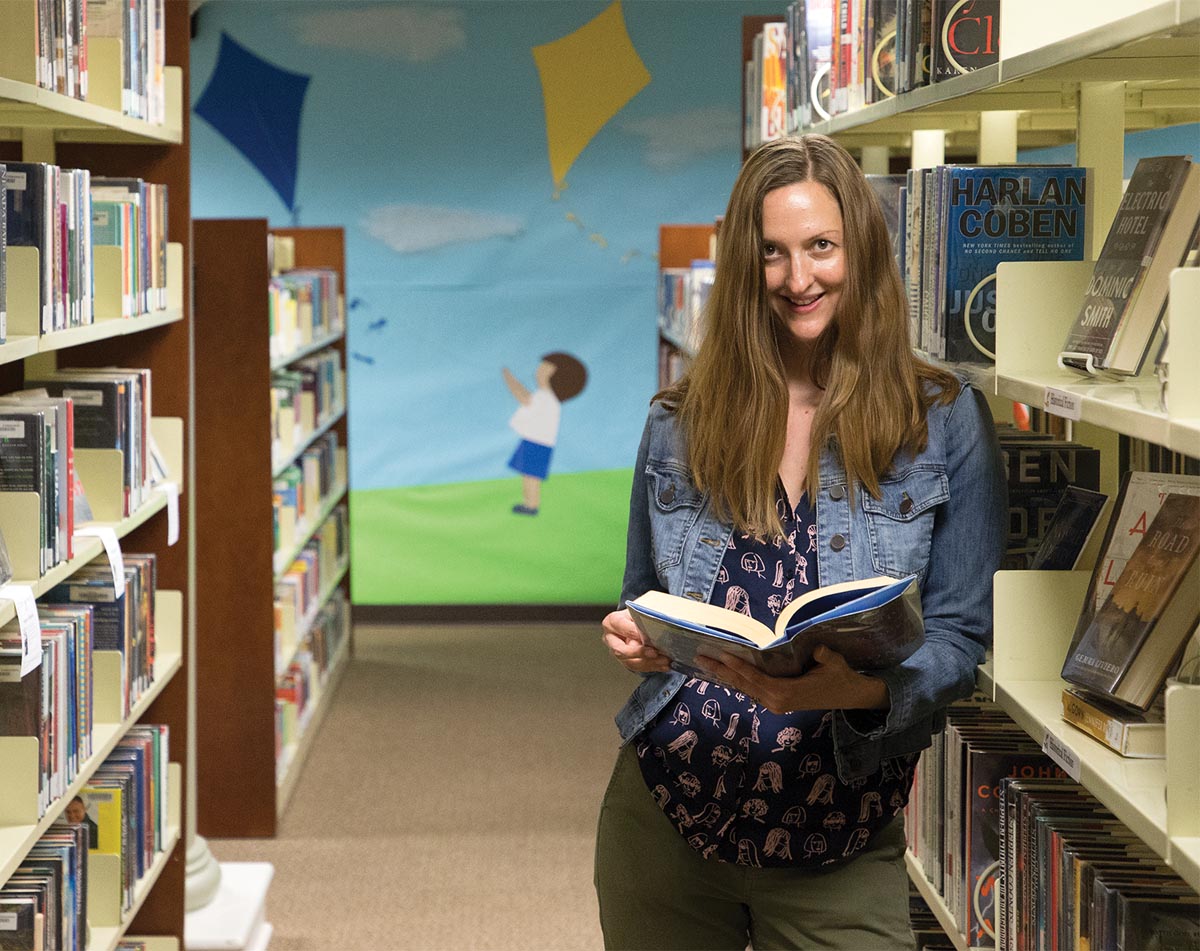 Jen Tucker Operations Manager
Jen is responsible for the adult collection, from books and movies to e-content. After a co-worker brought the Getty Museum Challenge to her attention, she helped the staff come up with their own creative ways to mimic a piece of artwork from the Getty’s collection. Jen has worked at the library for 14 years, and speaks for everyone there when she notes how much they’ve missed personal interaction with their guests.