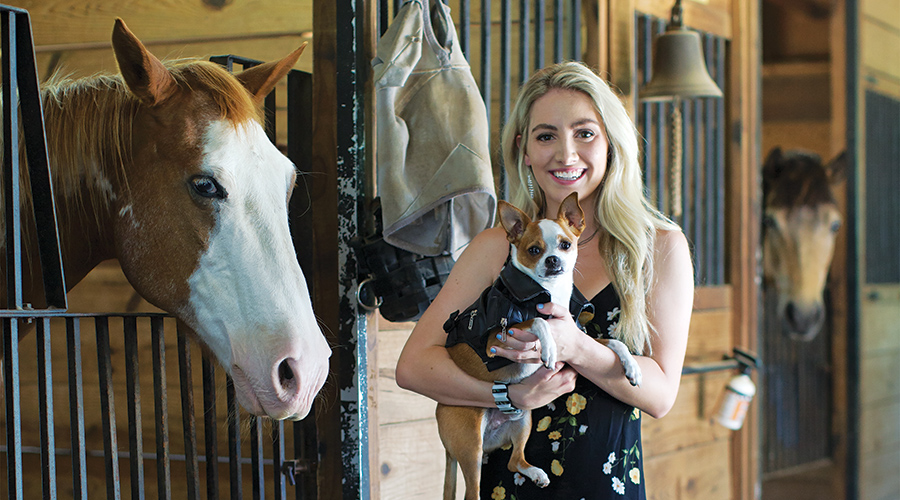 For the Love of Animals

Years of working with animals, from shelter pets to South African wildlife, has prepped Callie Smith for her biggest challenge yet: London’s Royal Veterinary College. 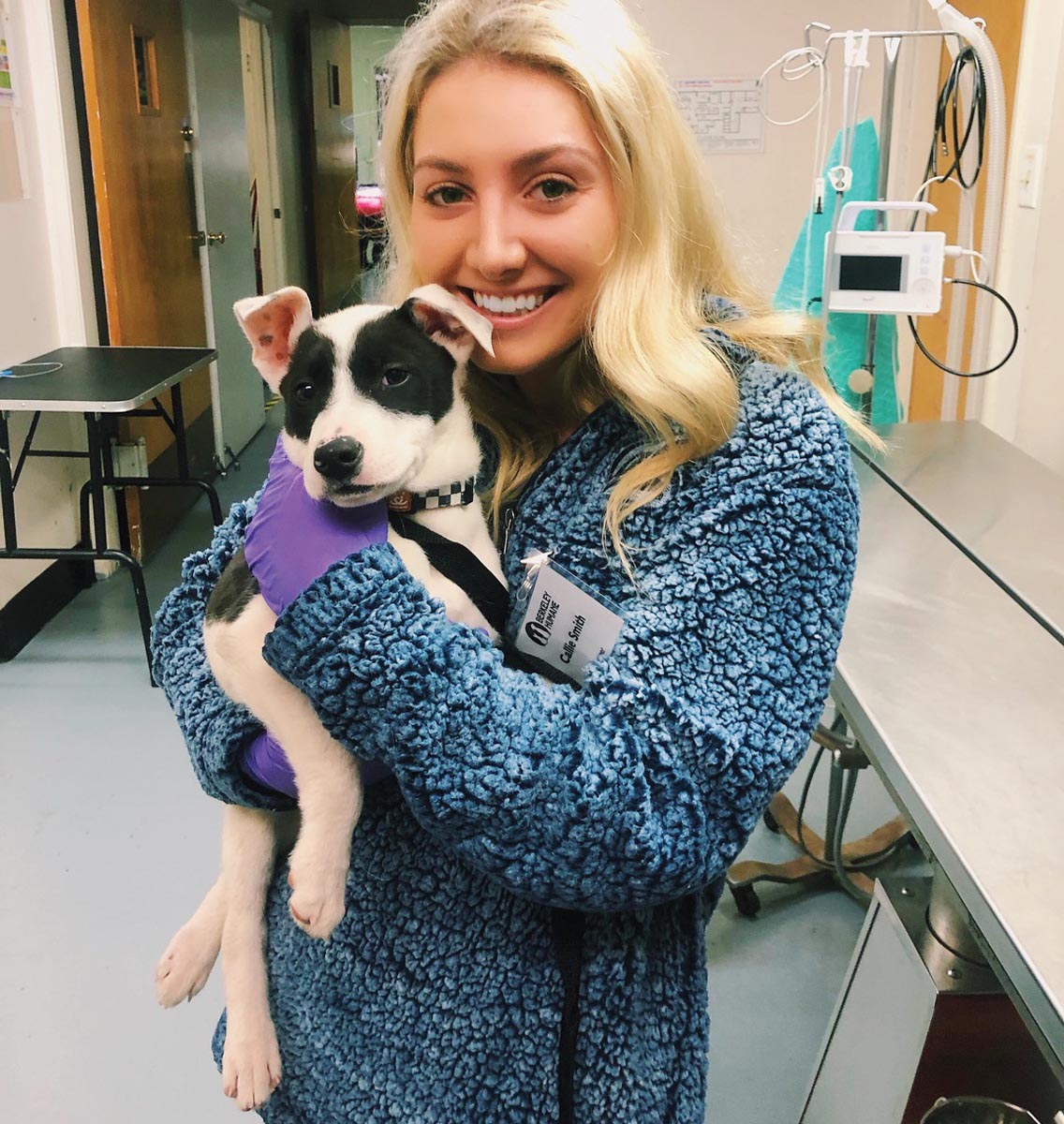 Count Callie Smith among those students whose graduation plans were upended by COVID-19.

After finishing her senior year at University of California Berkeley, Smith has spent these last few months with her mother, Kate Hennessey, at their Southlake home, joined by a menagerie of four dogs, four horses and one cat.

In mid-May, friends and family — including many from the United Kingdom — were supposed to gather in California for her graduation. Instead, Smith donned her cap and gown and posed for photos taken by her mom in the backyard.

The 22-year-old is the proud owner of a bachelor’s degree in molecular environmental biology, but her future is clouded somewhat by the global pandemic. In August, she is scheduled to leave for England to attend the Royal Veterinary College of London. “I’ve been in contact with my advisers, who have been preparing students for the possibility for online classes. That would be a first for them.“

Originally, she had planned on moving to London in March to stay with relatives — most of her mother’s family are in England — and get a head start on school. Instead, she has been taking prerequisite classes online and working at a veterinary clinic in Dallas. Smith also has been able to help her mom with all the family pets, including her own rescue dog, Mr. Mojito. She adopted the 2-year-old Chihuahua mix from an overcrowded Oakland, California, shelter right before her senior year.

“I was flying home the next day but saw his photo. There was a lot of canine influenza going around and he was sharing a kennel with five other little dogs, weighed about 6 pounds and wasn’t able to get his share of food,” says Smith. “Mr. Mojito is so spunky; he has been an emotional support animal for me. I would get anxious leaving Texas or California, and he made those trips much better for me. He has bonded with the family dogs, especially our husky. They snuggle together. And he is going to go to London. I’ve been trying to get him used to rain.”

Smith’s love of animals has been part of her DNA since she was a child. “My first words were our dogs’ names. My family always has had rescue cats, dogs and horses, along with flocks of chickens and orphaned bunnies.”

Smith got a taste of her future career by taking care of the animals, especially the ones with medical needs. “One of our dogs got diagnosed with diabetes, and even though I was terrified of shots I learned how to give injections.” Smith, who attended The Hockaday School in Dallas, early on had aspirations to become a marine biologist or to follow in her mother’s footsteps and study law. But the lure of veterinary medicine was too strong. In addition to getting into Cal Berkeley, Smith was accepted into an accelerated vet program at the University of Sydney in Australia. “My plan was to go to Berkeley for maybe a year and then transfer to Sydney.” 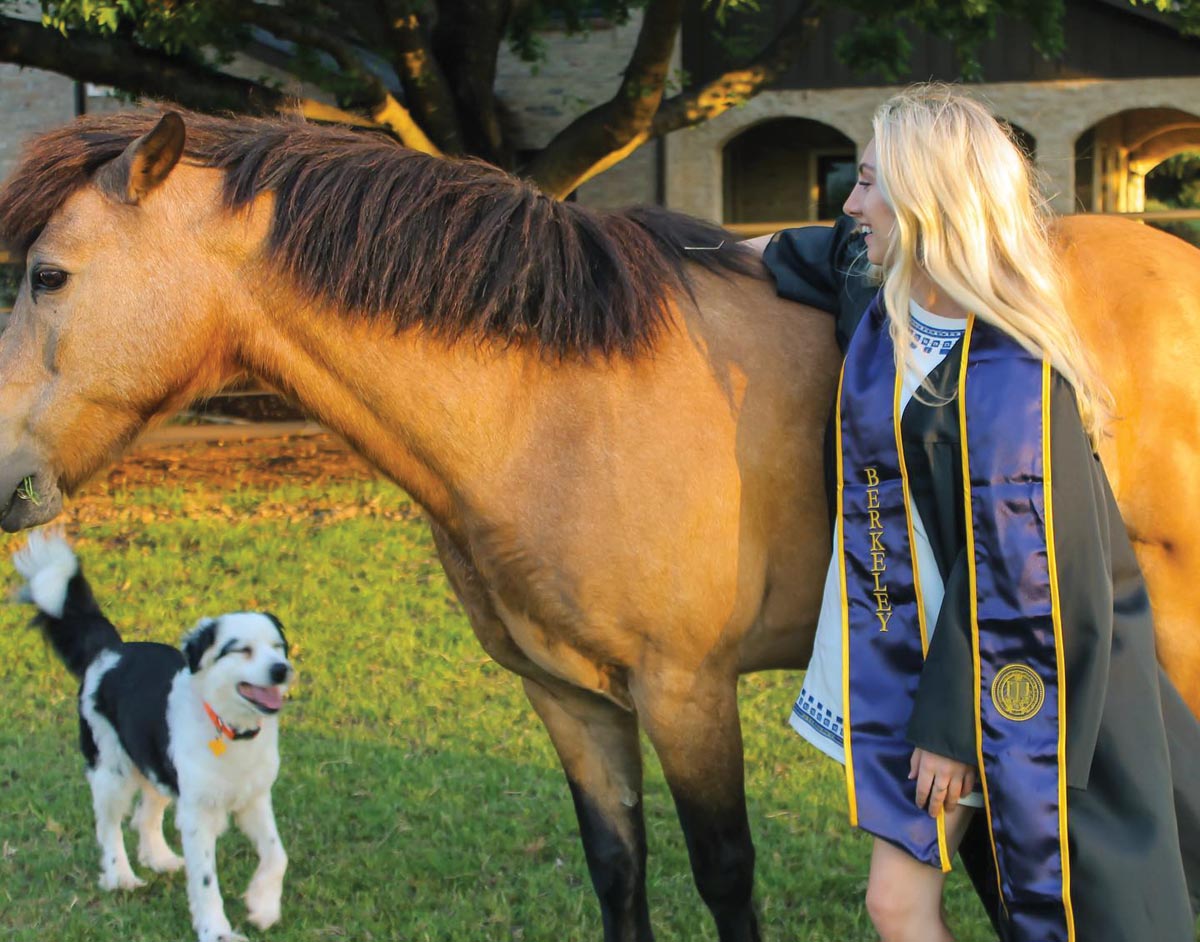 Callie’s mom, Kate Hennessey, took on the challenge of taking graduation photos of her daughter with some of the family pets. 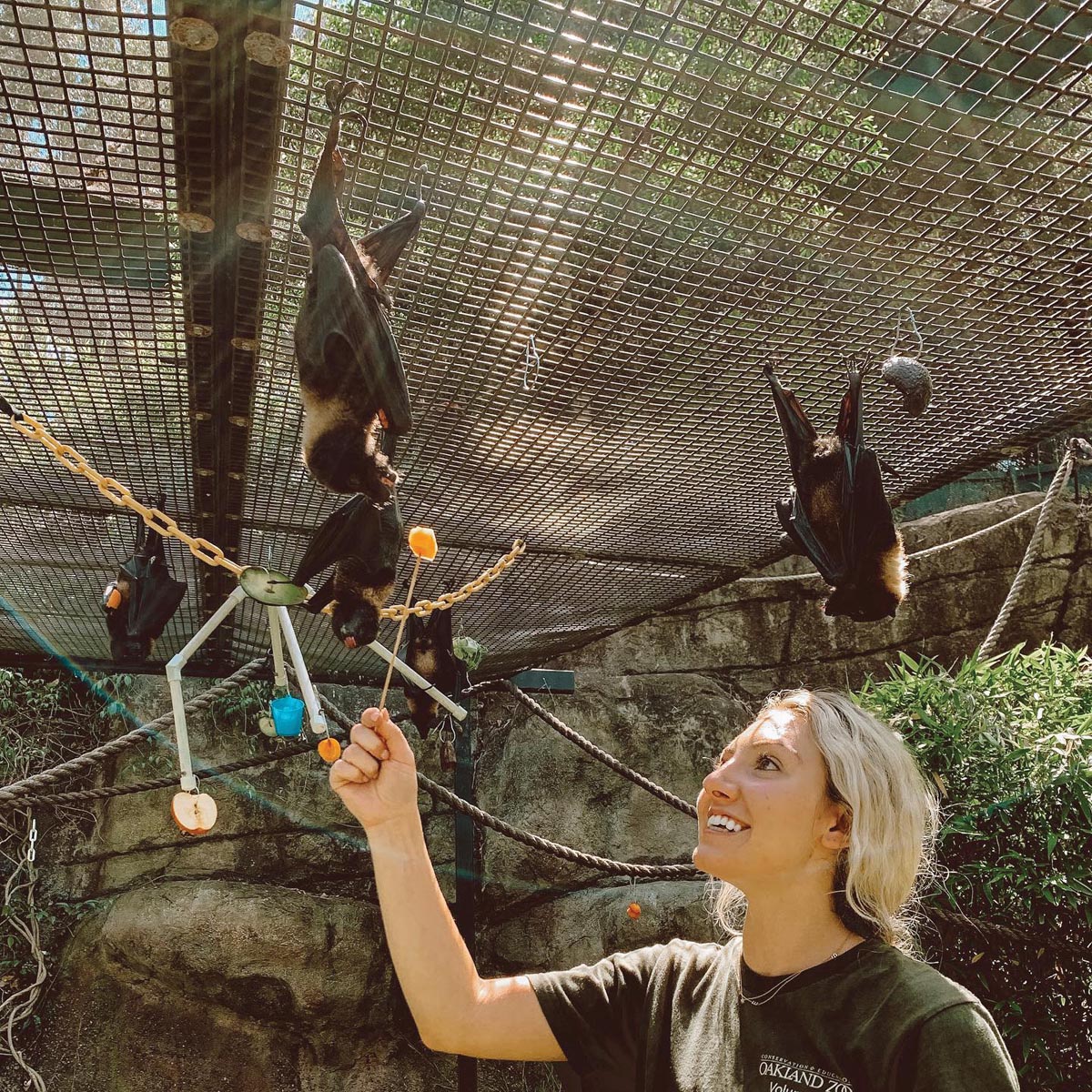 As an unpaid intern at the Oakland Zoo, Callie overcame her fear of bats.

But the progressive California city won her heart and mind. “It was a very quirky place, and I loved it. I learned to be more independent,” says Smith.

She took premed classes with a concentration in animal behavior. “I figured that gave me the option to take the MCAT or apply to vet school.”

In addition to school, she took a job as an unpaid volunteer at the Oakland Zoo. “I worked with otters and bats. I was more nervous about the bats, but discovered that they are the biggest love bugs. They were attracted to the smell of my hair along with fruit.”

Smith also volunteered at the Berkeley-East Bay Humane Society. “I started out as a dog walker and also did some fostering. I got involved with the hospital for six to 10 hours a week.“ Fieldwork in South Africa after her first year of college gave her a chance to work with native species and cemented her love of working with animals.

“I did have an internship with an orthopedic surgeon, but I just didn’t enjoy working with people as much,” admits Smith.

When she decided to apply to the London vet school, she knew she was attempting to get into one of the top-rated schools in the world and one of the oldest.

“When I was interviewing, I saw class photos from the past and noticed how back then it was mainly men with a woman or two. But later photos were just the opposite, with more women than men. I wanted to be a part of that,” says Smith.

Her post-undergrad life in Southlake has not only included working in the emergency room at MedVet in Dallas (where their family dogs are treated), but occasional visits with her boyfriend, a fellow Berkeley graduate and Air Force pilot-in-training. “We are lucky that we both have amazing families to be with during this time,” says Smith.

She also has been tutoring a first grader via Zoom. “This has been challenging — and scary — for all of us,” says Smith. “But helping others, be they dogs or kids, is rewarding.” 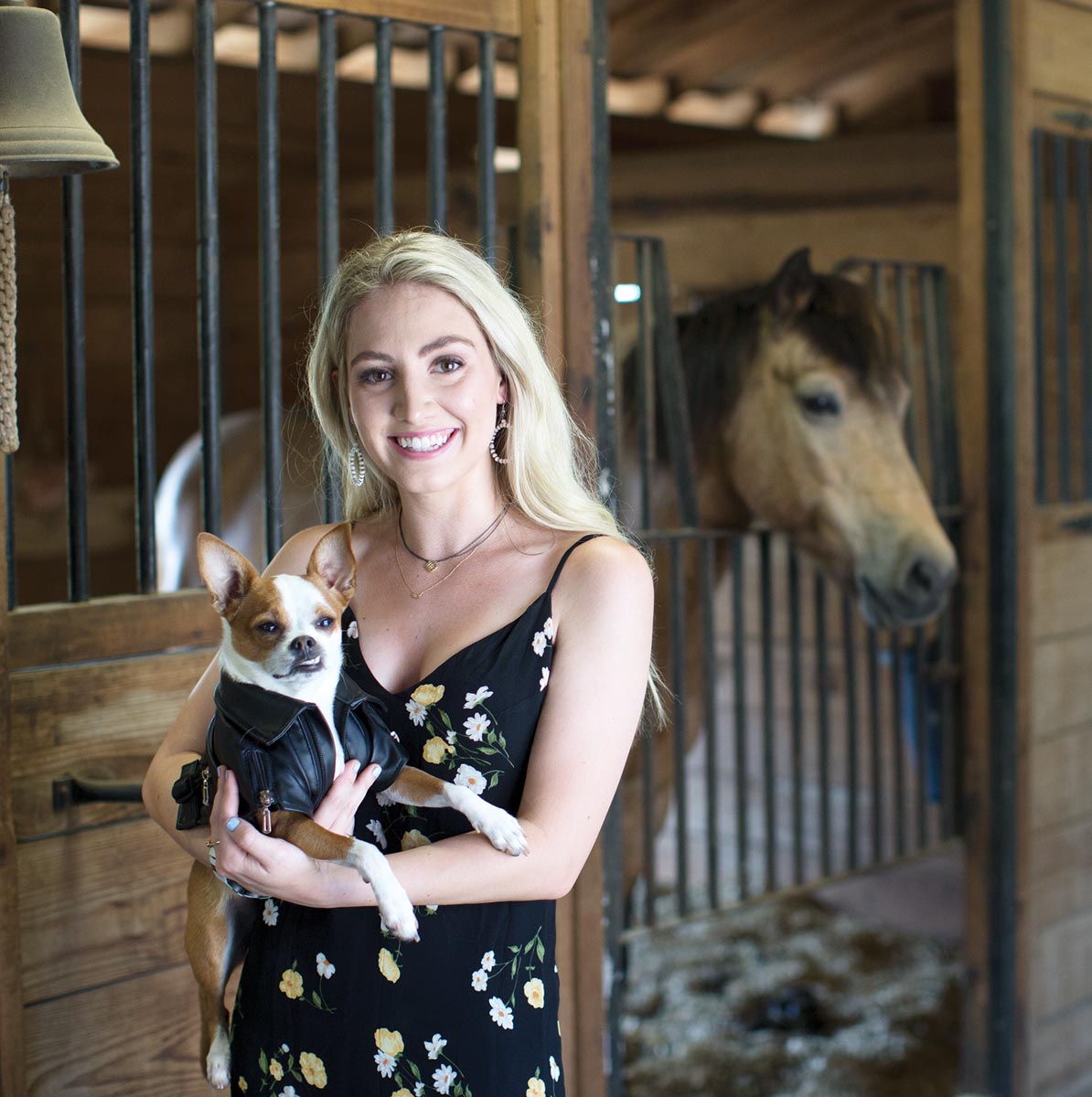