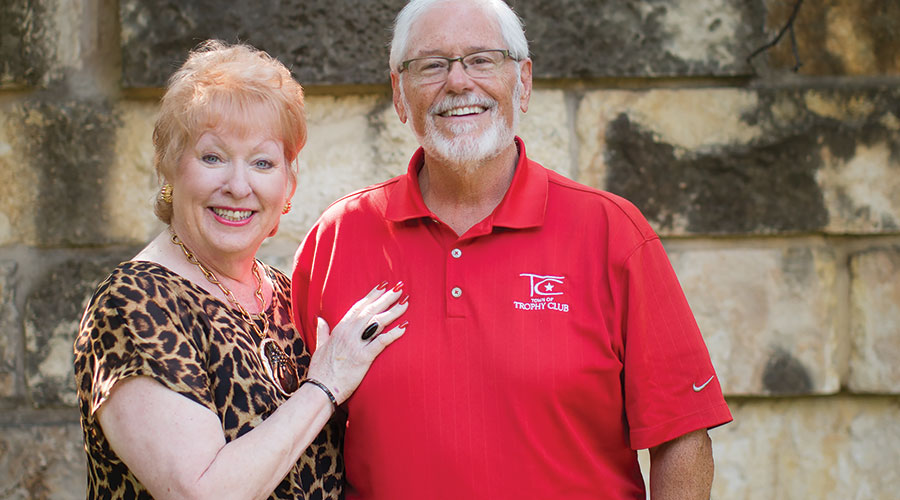 Cancellation of the State Fair of Texas left us with so many questions. What’s a fall without a visit to Fair Park? Where would we get our fried food fix?  Is it possible to make a butter sculpture at home? Will Big Tex be lonely? And what will Nick and Lynda Sanders do with all their free time? In years past, the couple would be prepping for their annual ribbon haul from the fair. The Creative Arts competitions — everything from ceramics to cross-stitch to cooking — have long been a tradition at the fair (since it began in 1886). And while Lynda originally participated in categories such as flower arranging, she and Nick — he’s the mayor of Trophy Club — today are known for their culinary prowess. We checked in with the couple to talk about blue ribbons, food and family.

Days before our August visit to their Trophy Club home, the couple attended a pop-up by the Fletcher’s Original Corny Dogs food truck hosted by the city. “It was so hot, but people came out and stood in a very long line,” says Lynda. It’s something they can’t do this year at Fair Park, although a drive-thru event is now scheduled. “The State Fair organizers worked so hard to think of ways to make the fair happen and keep people safe, but it just couldn’t happen,” says Lynda. Instead, only pickled veggies, jams and jellies will be entered in the food division, and there will be no live judging.

The couple’s entries include Nick’s Tipsy Tomatoes (pickled in wine) and a bacon-pepper fruit jam. Lynda brings out the 2020 State Fair cookbook containing entries from last year’s winners. The index lists entries by food category and also by entrant. Lynda’s listings take up several lines, as do Nick’s. And we were surprised to see that they don’t specialize in one category. Winning dishes range from appetizers to desserts: Almond Divinity, Roasted Sweet Potato Salad With Warm Chutney Dressing, Thai Green Curry Chicken, to name a few. Their numerous ribbons, mostly blue, are stashed in desk drawers and plastic boxes. There also are a couple of medals for winning best of show. “At one point we wanted to get them arranged in frames,” says Nick, admitting that it was too daunting of a project. 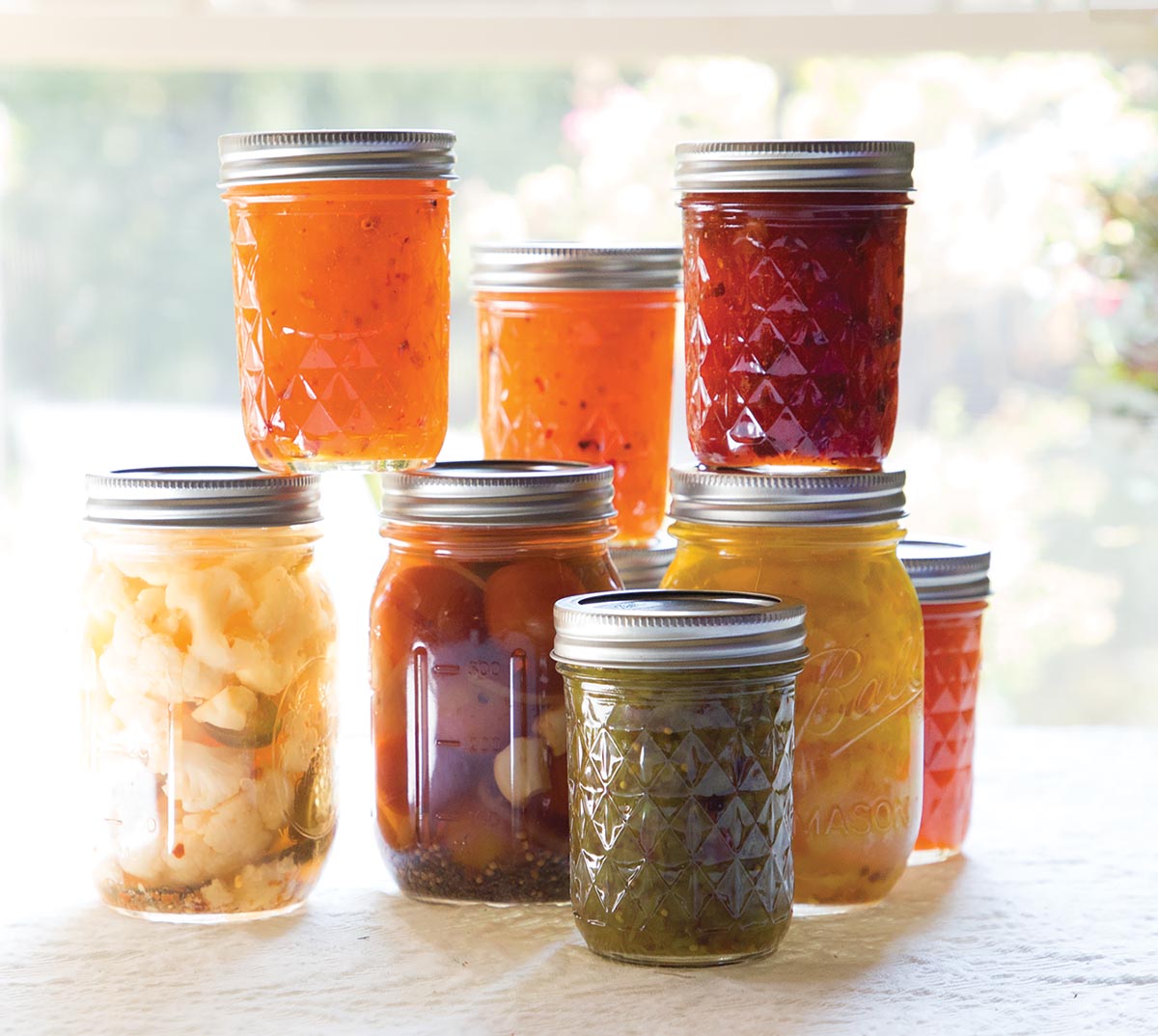 A sampling of the pickles, jams and jellies entered in this year’s competition. Right, the collection of ribbons is stored in boxes and stashed in desk drawers. 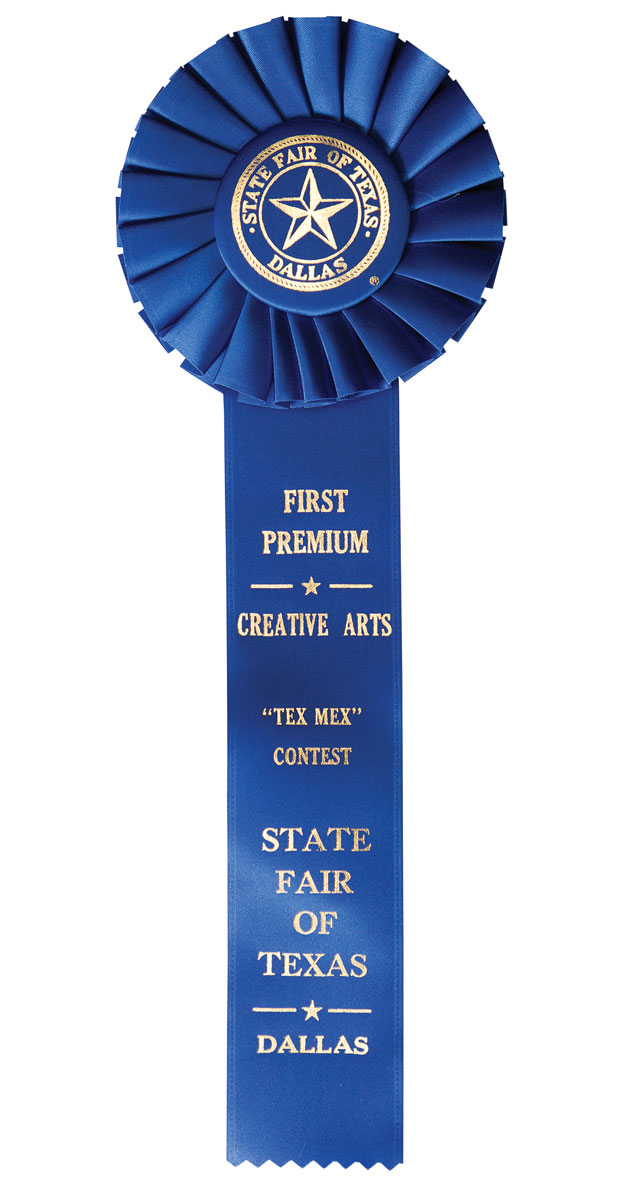 Their joy of cooking began more as a love of entertaining. Lynda, a Dallas native, says she left for college without any real cooking skills. She met Nick, who is from Corsicana, and their popularity grew thanks to their dinner parties. “He always was a great host, and we worked well together.” The trend continued for the newlyweds (they’ve been married 53 years) and hasn’t stopped since. “We’ve led gourmet groups, organized progressive dinners,” says Lynda. “It became a good way to test recipes.”

Lynda’s first go at the State Fair’s cooking competition happened about 40 years ago. “She had missed the deadline for the Creative Arts entries, so I encouraged her to enter the food division,” says Nick.

A nervous Lynda entered the Spectacular Desserts category with her Almond Linzer Torte. She remembers being intimidated by a contestant who was a spokesperson for Imperial Sugar and a veteran at the cooking competition. “I sat next to a young woman who turned out to be her daughter. She could not believe I had the nerve or the talent to enter this category and mocked me for doing so.” Lynda almost left the building; instead, she heard her name called out as the winner. “I felt real validation. And I can tell you that when you do hear your name, it’s like a drug. You want more,” she says with a smile.

Nick has only been competing for about the last 16 years. His first entry was prompted by Lynda’s indecision on what to make for a dessert competition. She opted for a citrus dish; he made White Fudge A La Orange using Grand Marnier and orange zest. Nick won the blue ribbon; Lynda got second. We wondered if it was challenging to live in a dual-competitor household? “I love Nick winning more than I love winning,” says Lynda. The support is mutual. “Lynda’s incredibly creative,” says Nick. “She reads cookbooks like most people read novels. I think of myself as her sous chef. If she needs olives cut into quarters, I’m her man.”

One of the real challenges of being a State Fair competitor is the amount of food that has to be prepared. “You have to make enough for the judges and the possibility that you make it to the best of show round, where different judges have to sample your dish,” says Nick. “We always had leftovers to give away and would make the rounds in the neighborhood and at my office. Later, we would text people to ‘come and get it.’”

Although they haven’t been able to entertain recently, Lynda still prepares an elaborate meal once a week. Sunday dinner with the family always means two entrees. “Hospitality is missing from our lives these days,” says Lynda, who loves sharing her tips on how to make people feel at ease entertaining if they don’t cook. She has given numerous talks to community organizations. “But things are different now.”

It’s been a rough year for the couple in more ways than one. There are lingering effects from a stroke Lynda suffered in April 2019. And this past spring, they both contracted the coronavirus, along with their 48-year-old son, Wade Sanders. They recovered, but Wade died in April after spending weeks in the hospital on a ventilator. They never got to see him in person before he passed away. Wade also played an important role in his parents’ culinary adventures.

He went to culinary school and was the general manager of Reata Restaurant in Alpine before returning to Fort Worth and later working in the wine industry.

“For Wade’s school graduation dinner, he made his mom’s gumbo,” says Nick. “And we’ve been trying to re-create his famous spice blend, as he never wrote down the recipe. We think we’re close, though.”

Lynda remembers Wade once telling her not to make a fuss over dinner but then insisted upon a multicourse meal, including beef stroganoff with her special spiced peaches as a side dish. (It’s still a favorite dish of Nick’s.) And the couple have fond memories of Lawson, Wade’s son, competing in the State Fair as a boy. “He was around 12 (he is now a high school senior) when he won his first big prize, a blue ribbon and a $250 prize for his Country Fried Finger Basket using Spam,” says Lynda.

“I remember how excited he was, and I can relate. I’ve told Nick, I’m only going to compete until I don’t win a ribbon.” 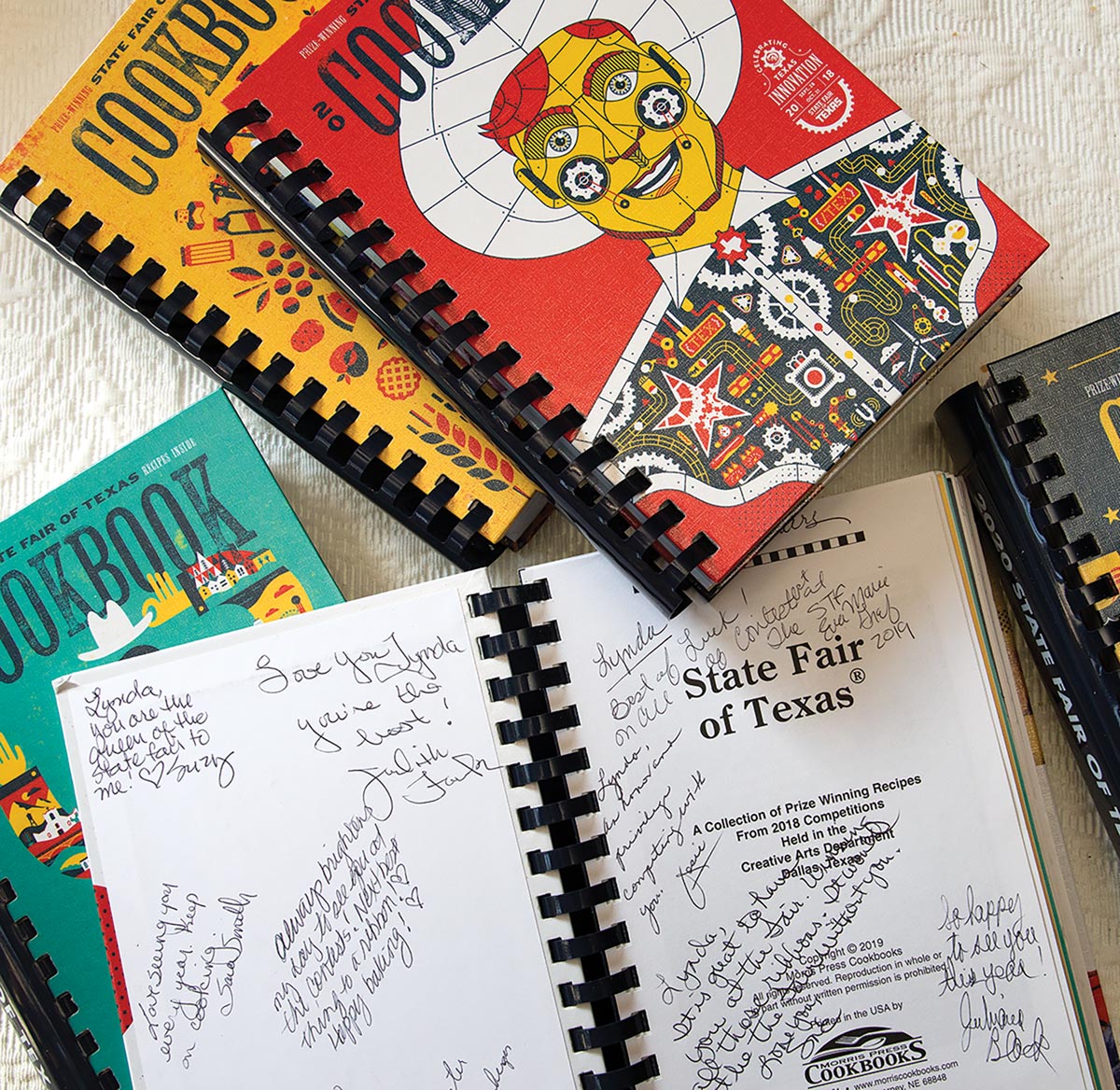 The State Fair puts out a cookbook each year. Lynda and Nick have become such familiar faces over the years that they have gotten to know most of their fellow competitors, who autograph each other’s copies as if they were a yearbook.

The coconut milk adds a distinct flavor. Adjust your heat level by varying the amount of jalapeno you use.

Toppings (optional, any or all)

To serve, garnish with desired toppings. 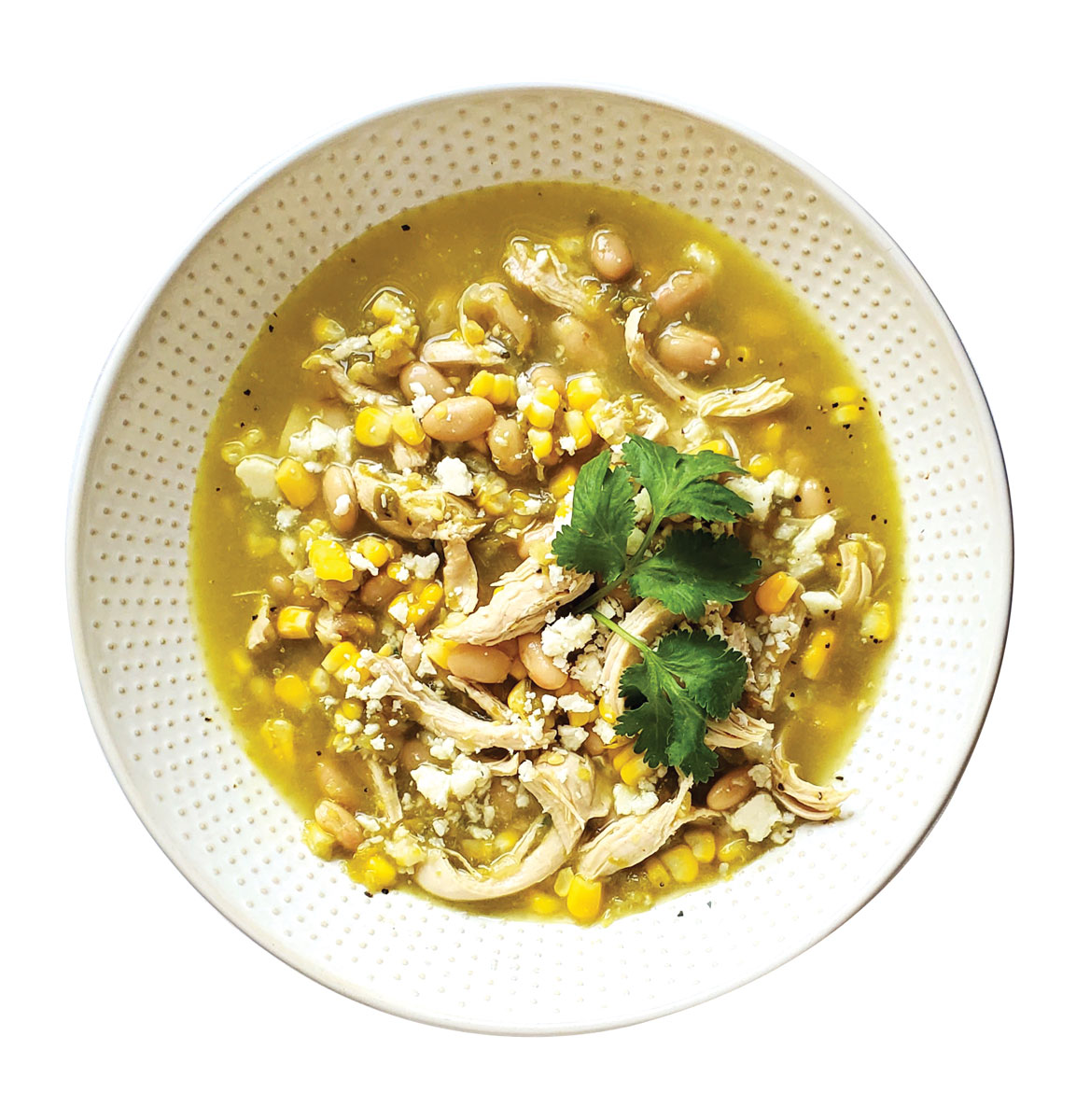 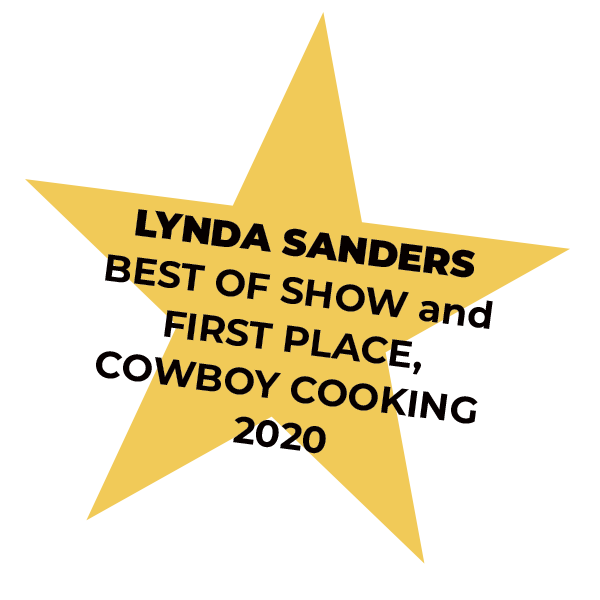 This Bundt cake is rich and moist thanks to the flan and the caramel.

Fill a large roasting pan with hot water to a depth of 2 inches; place on a rack in lower third of oven. Preheat oven to 350 degrees.

Beat butter, granulated sugar and brown sugar in bowl of a heavy-duty stand mixer (or use a hand mixer) on medium speed until light and fluffy, about 3 minutes. Add egg; beat just until blended.

In a bowl, sift together flour, pumpkin pie spice, baking powder, baking soda and salt. Whisk together pumpkin, buttermilk and vanilla in a separate bowl. Add flour mixture to butter mixture alternately with pumpkin mixture, beginning and ending with flour mixture, beating on low speed after each addition (batter will be thick).

Place condensed milk, evaporated milk, eggs and extract in a blender or use a hand mixer. Process on high speed until completely combined, about 30 seconds, stopping to scrape down sides as needed. 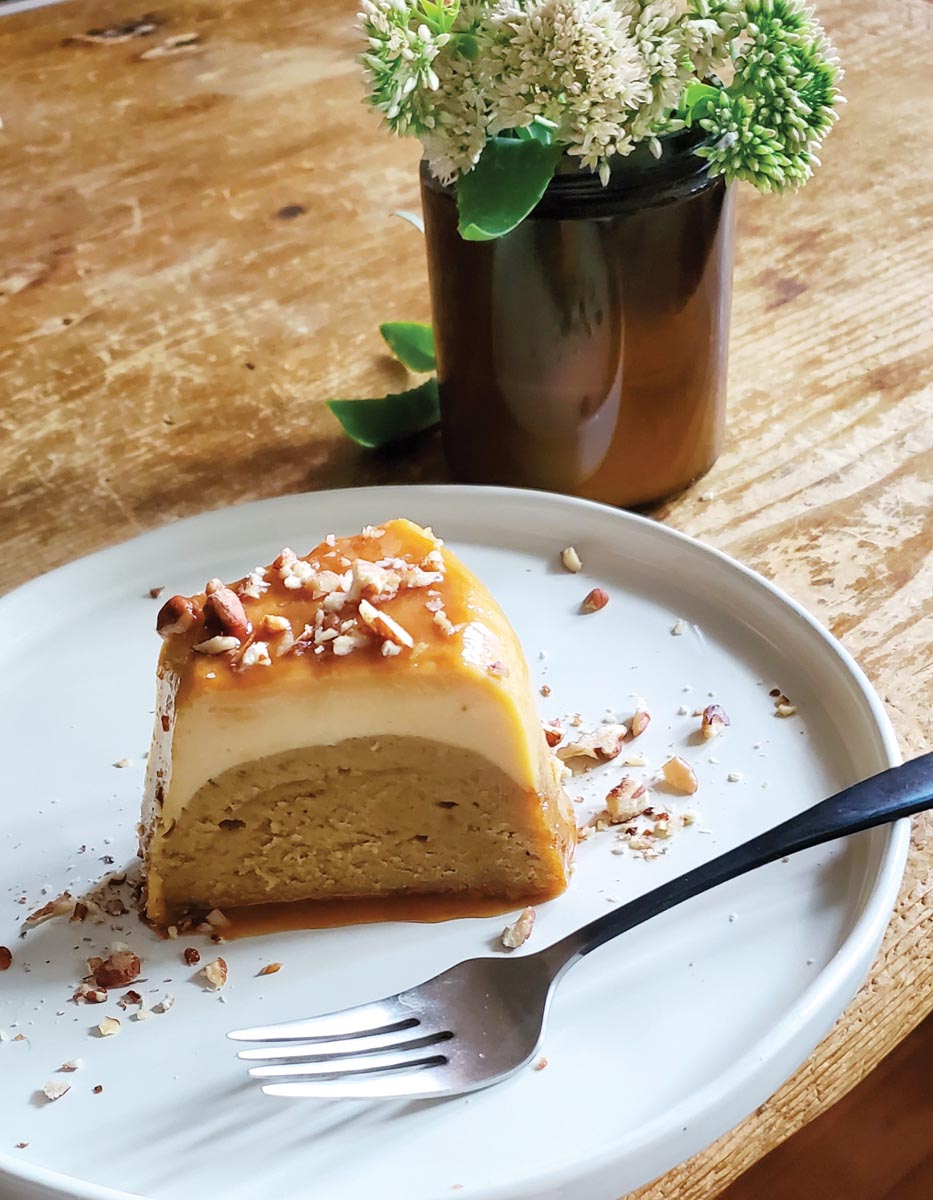 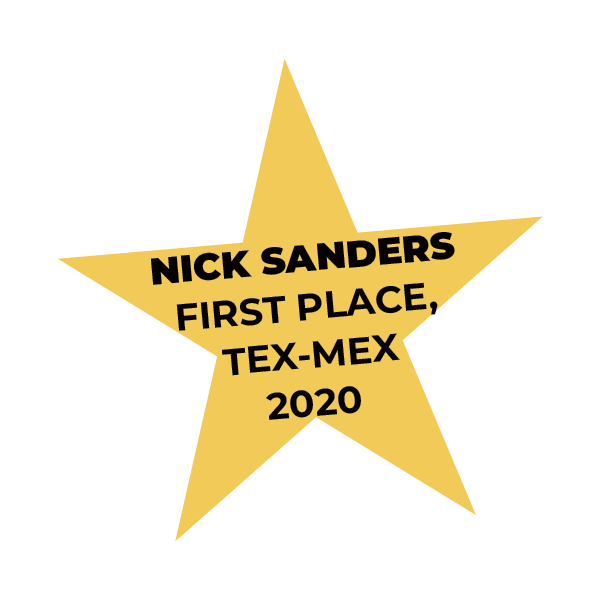