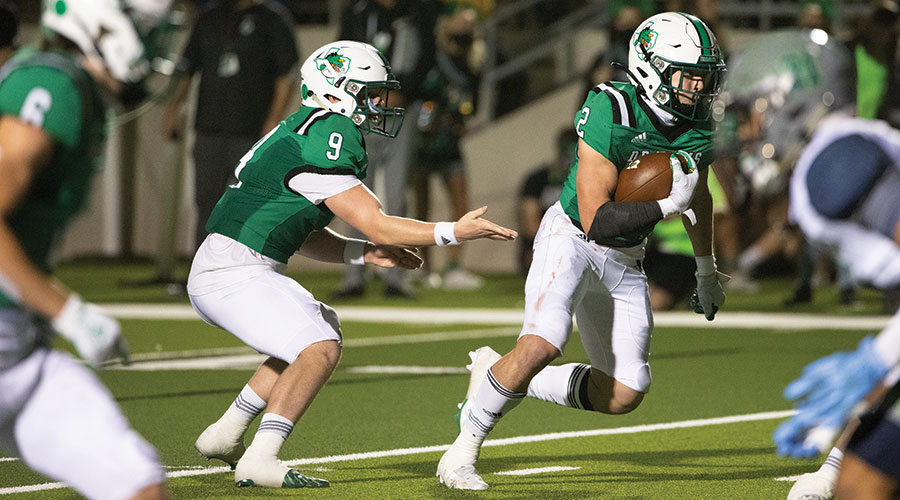 Life in the fast lane

Dragons junior running back Owen Allen is digging — and digging into — a new season.

Owen Allen is easy to spot.
He’s the guy going fast. He’s the guy smiling a lot. He’s the guy vibing in his element — around people, around friends, on a football field. He’s toting the rock, sporting his green, being a Dragon.

And he’s loving it. All of it.

“We’re all living the dream,” he says ahead of a 2021 junior season in which he is primed to spearhead the Southlake Carroll ground game. “It sounds cheesy, but it’s true. Growing up in Southlake, you don’t want to be a Dallas Cowboy or a Texas Longhorn. You want to be a varsity Carroll Dragon.”

Allen enters his third season as exactly that, the running back the Dragons give the ball to on any down, in any situation, on any part of the field. With more than 3,300 yards and 51 touchdowns over his first two seasons, the speedy, powerful runner is a critical component of Carroll’s plans for the new season. 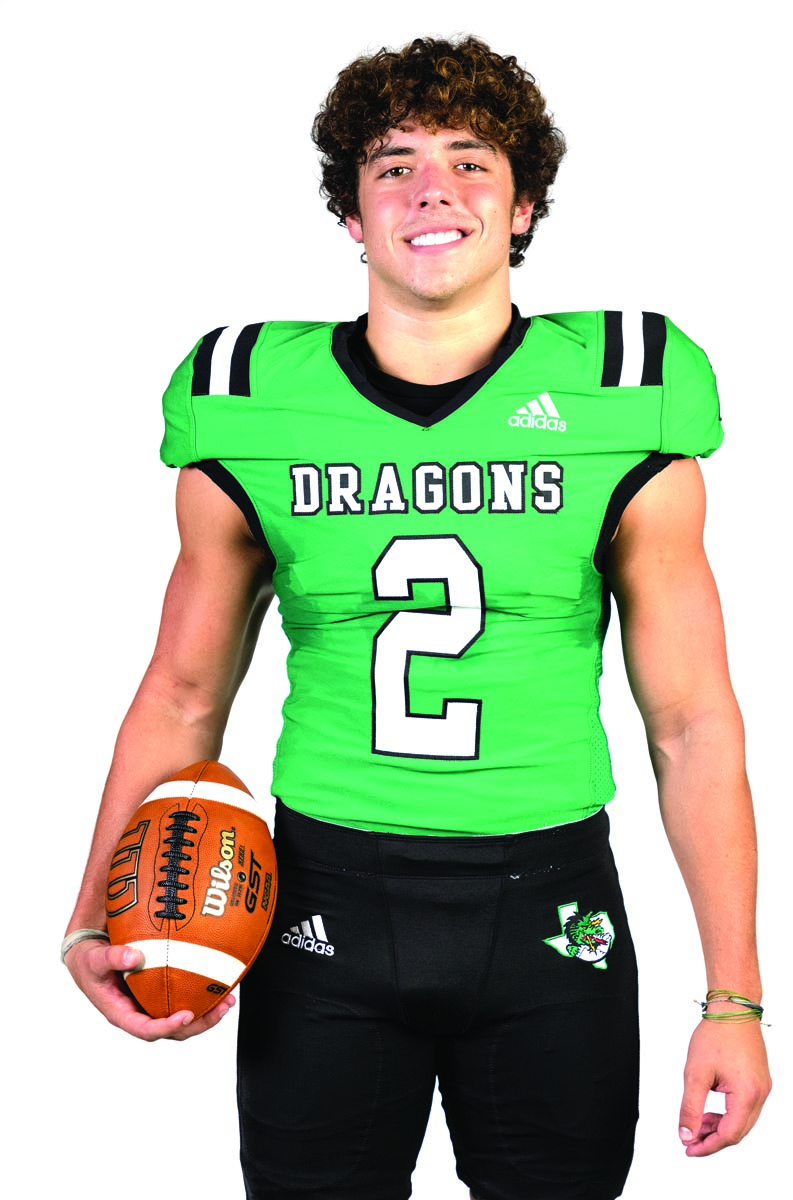 Junior running back Owen Allen, who became a starter after his fourth game as a freshman, sees endless possibilities for himself and the team. 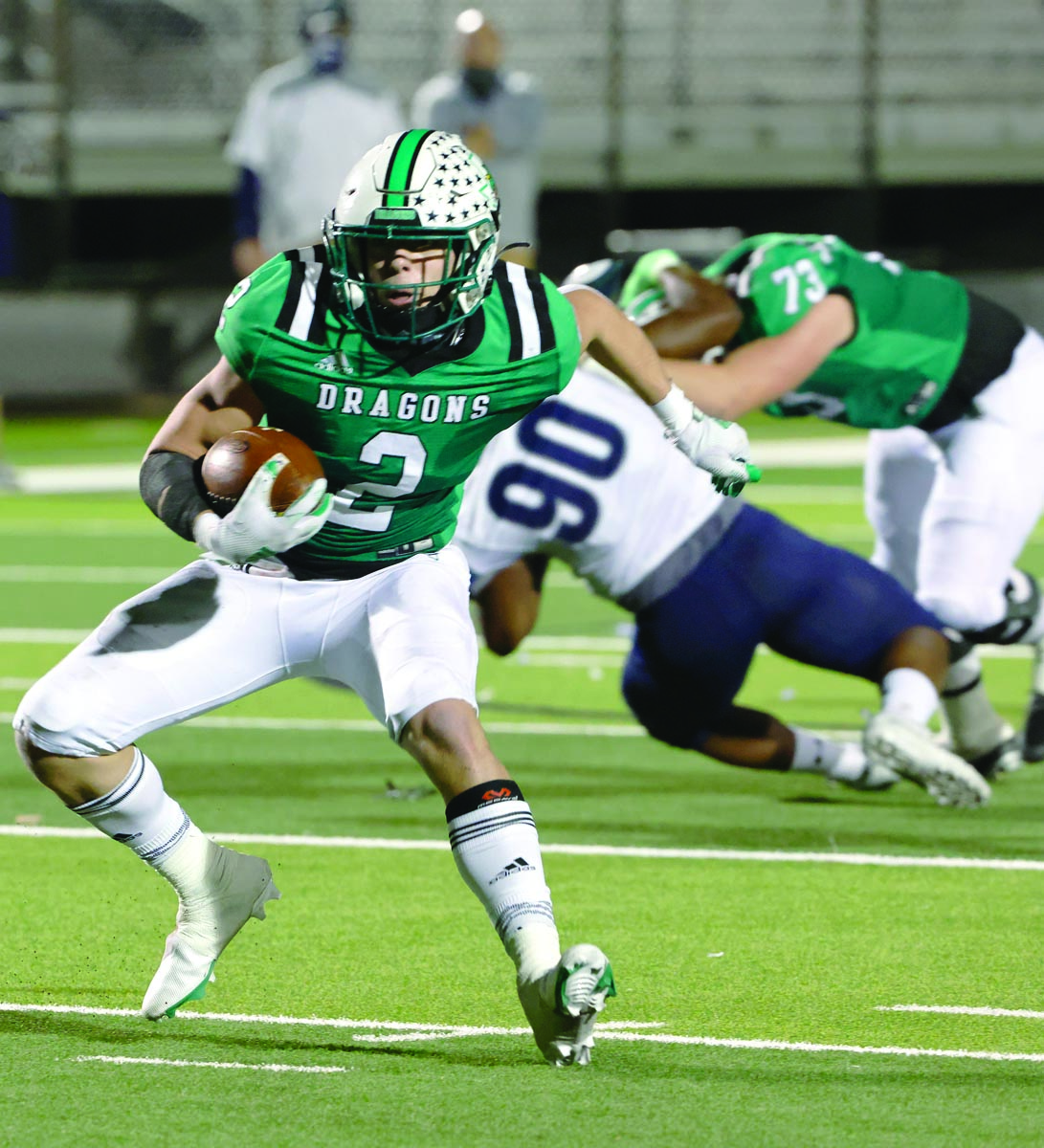 Allen has rushed for more than 3,300 yards in his varsity career.

“He’s going to be a huge part of our team,” receiver Landon Samson says of the fleet-footed rusher who can get away from a tackler or go right at him. “Owen’s coming off a 2,000-yard season. He’s a freak athlete, someone who has a major impact on this team. He leads more than probably anyone.”

No Carroll game is complete without its top runner getting the ball. Head coach Riley Dodge wouldn’t change a thing.

“As a zone path runner, he’s very, very patient — doesn’t get antsy, lets things develop,” says Dodge. “And he’s unbelievable in the passing game and blocking, a complete back. The biggest thing is to try to get him involved a little bit more in the passing game.

Uh-oh. Can you imagine that?

“He’s a competitor,” Dodge says. “I think it’s the biggest thing. He loves to compete. We got to get him the rock.”

Allen does the rest, giving the Dragons 6.5 yards per carry over his first two seasons and better than 133 yards per game, on average. Yet his contributions go far beyond the field. In the locker room, on the sideline, on the bus — anywhere the Dragons are gathered — the athlete is gauging his teammates’ moods. He keeps things light when they need to be light and reminds them to focus when it’s required.

“I try my best to keep the guys levelheaded,” he says. “It’s easy with this team. You don’t have to try very hard. They’re really close outside the fieldhouse. We’re all just friends playing football together.”

A friend is easy to spot. For the Dragons, that’s Allen. The entire roster would probably say the same thing about the engaging player and his personality.

“He is the life of the group,” Samson says. “He’s a happy person, and he’s a great guy to be around.

One big reason for his happiness? Getting to play. A year ago, that wasn’t a sure thing as the pandemic threatened the football season.

“He’s a competitor,” says coach Riley Dodge. “I think it’s the biggest thing. He loves to compete. We got to get him the rock.” 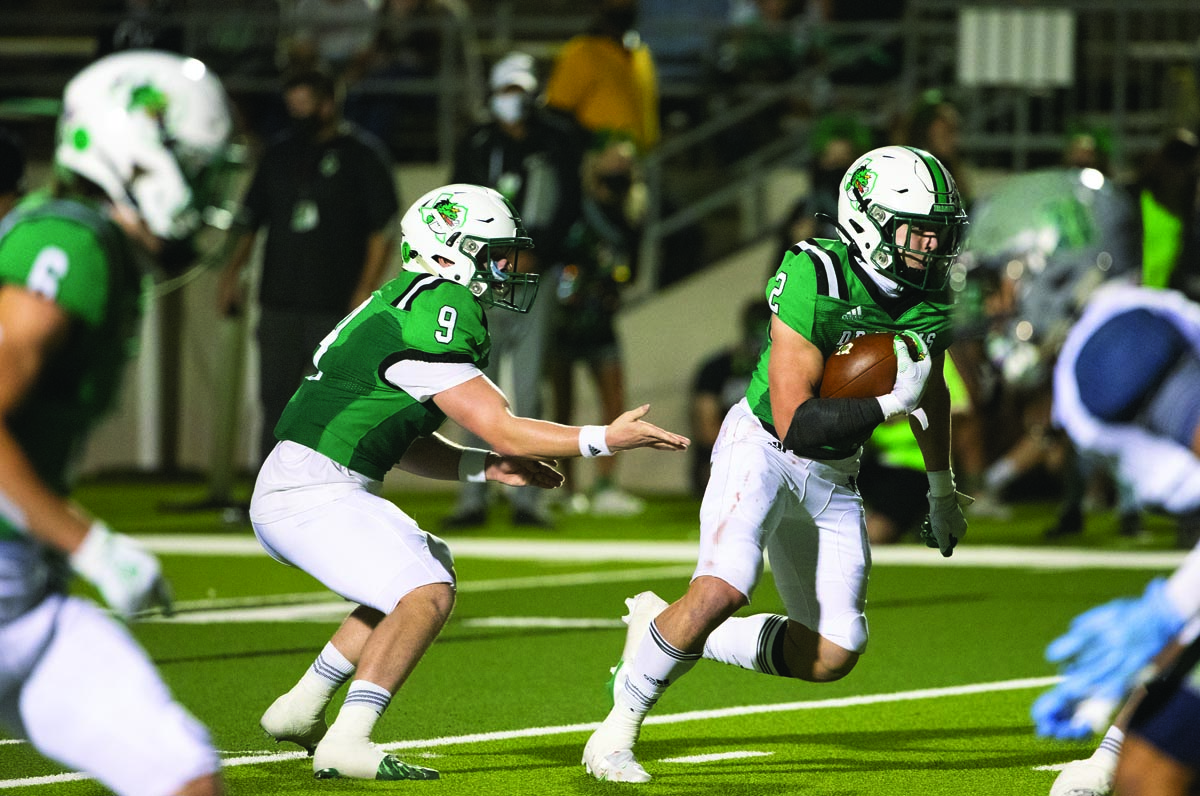 Along with the rest of the team, Allen takes the Dragon motto, “protect the tradition,” seriously.

“With all the crazy things that happened last year and all the injuries and slowly rebuilding this offseason, I’m just really excited,” Allen says. “There’s no telling what this group can do. Just to be here, to be with the team, for everybody to be healthy, it’s a blessing.”

Last year, thanks to creative, hard work on the part of education officials, UIL staff and health advisers, the Dragons and everyone else got their season. Allen’s phenomenal numbers that led to him punching in 29 times for six points and logging a final total of 2,063 yards. And all that with only three carries in the regular season finale.

“I was proud of it,” Allen says, assessing his season on a personal level and yet sharing credit. “A lot of guys on the team really stepped up in big ways and all had big seasons, memorable seasons.”

Perhaps another awaits. Allen is a veteran varsity player who knows what it will take. With a glance around the fieldhouse, he can see the ingredients in place.

“The possibilities are endless for this team,” he says. “We have that end goal in mind. A place like Southlake, the tradition we have, the guys take it seriously; we all do. It’s important to us.”

The season opens Aug. 26 at AT&T Stadium against Highland Park, another DFW program with monster gridiron tradition (the Thursday-night game will be televised on ESPNU).

Allen takes nothing for granted. He is leading the running backs into their drills, championing a winning attitude in meetings and the weight room, and keeping an eye on team spirits. He’s digging into his favorite time of the year.

“I’m just as excited as I was the first day of varsity practice my freshman year,” Allen says. “The guys that are here want to be here, and they want to win. They want to put in that work that’s necessary to win.”

Others have noted Allen’s hard work. He was named a Texas Sports Writers Association first team all-state player and the District 4-6A MVP in 2020.

Another big total this season — no guarantees, of course — might lead to another district championship and more, putting the Dragons star among the all-time best at Southlake.

“He’s a competitor,” says coach Riley Dodge. “I think it’s the biggest thing. He loves to compete. We got to get him the rock.”

Owen Allen By The Numbers

599 Yards rushing by McKinney’s Matt Gadek against Plano East in 2017, the most in a game in Texas.

65 Touchdowns scored by Aledo’s Johnathan Gray, the most in a season, in 2011.

51 Career 100-yard rushing games by Johnathan Gray, the most in a career.