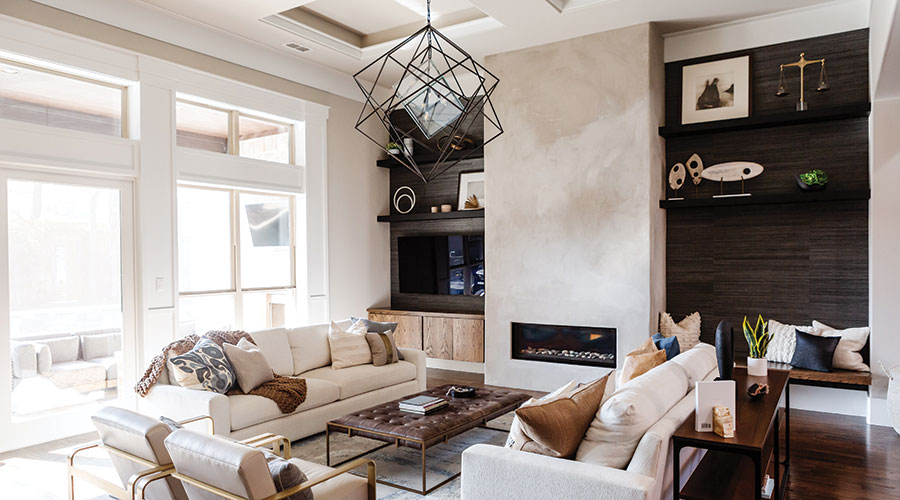 You buy a house that is an easy commute from your Southlake business; your brother’s family lives directly across the cul de sac; and the size and layout of the handsome stone home are just what you’ve been looking for. What could be wrong? As it turns out, virtually everything else. Not that homeowners Shannon and Will Miller were unaware that they would have a mighty big to-do list in their future when they sealed the deal for their Keller house in 2017.

The partners in marriage and business — Crash Analysis Consulting — met in a courtroom when Will appeared as an expert witness for Shannon’s legal team. The organized duo previously had taken a house down to the studs, so they dove into the remodel of their new property with eyes open. They tackled the kitchen themselves before tapping Southlake design/build firm Lambert Home in 2021 to finish making this house their home.

Shannon, a former trial lawyer, had a strong vision for what is today a chic and comfortable nest for her, forensic crash reconstructionist Will and their 13-year-old son, Tripp, plus a couple of dogs with big personalities. “We came from a house we had completely made our own,” Shannon says. “Moving into a home that reflected someone else’s vision was rough.” 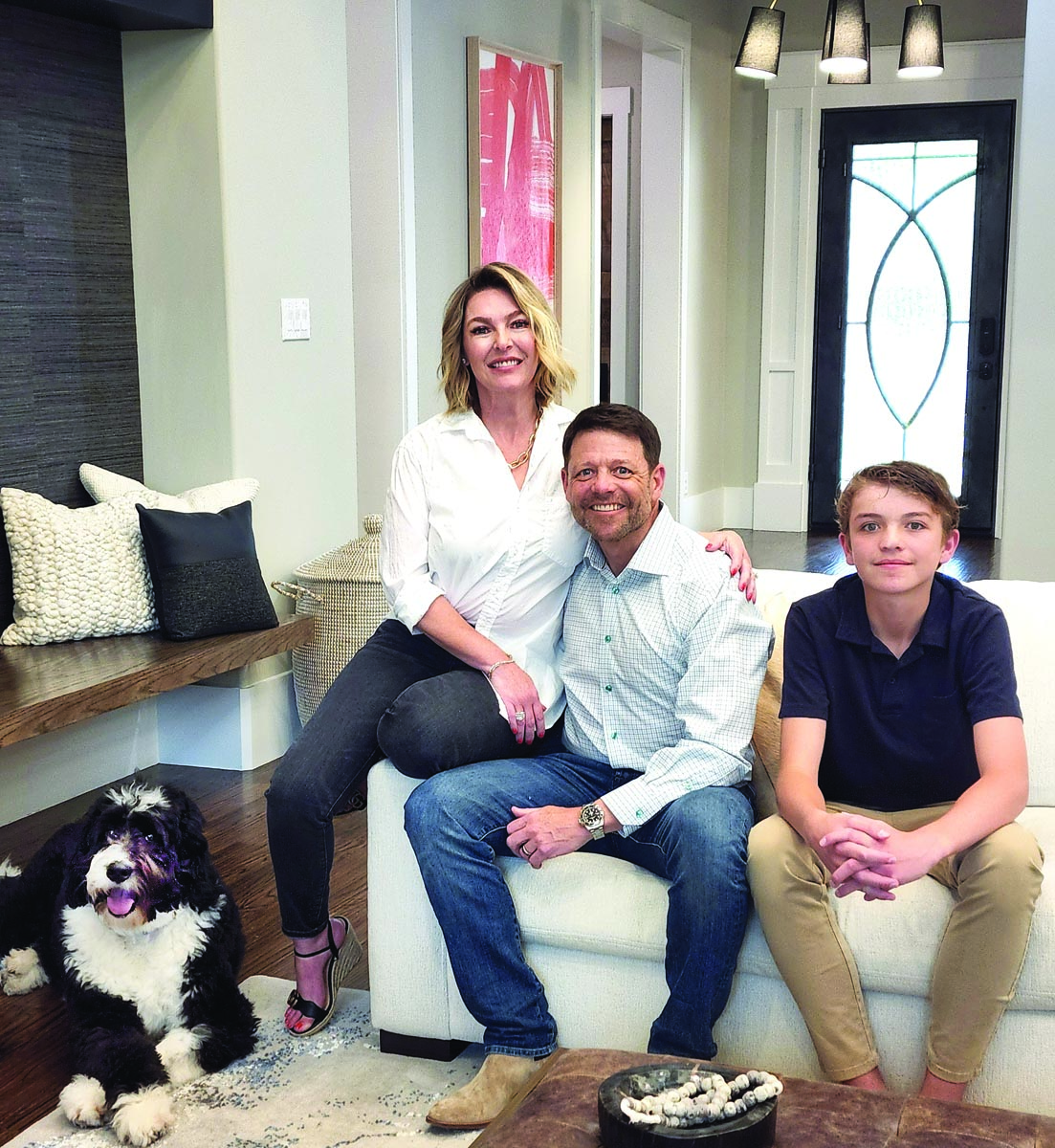 Bernedoodle Judge joins his humans, Southlake business owners Shannon and Will Miller, along with their son, Tripp, in the recently remodeled living room of the family’s Keller home. Photo by Meda Kessler 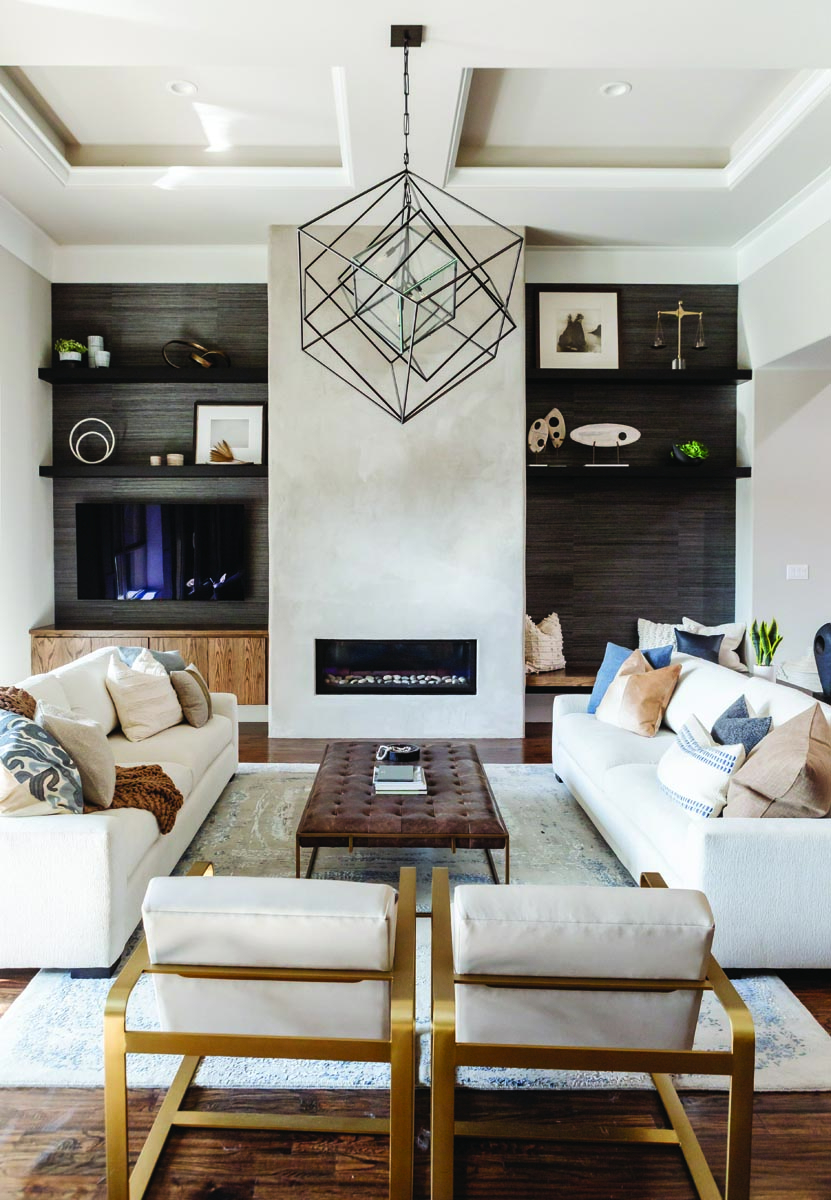 A polished concrete fireplace surround was designed without a mantel, allowing its smooth form an artful place of honor. Replacing brown wood trim on the coffers lifted and brightened the room.

The footprint of the home was solid, but the finishes for what was a builder’s model home were far from the clean-lined, contemporary look the couple favors. For starters, the kitchen was awash in wildly colorful arabesque tile and dark wood.

While both Millers were also unhappy with their en suite bath, they agreed the kitchen makeover — the home’s heart is an open family/dining/kitchen space — was a priority.

Shannon had a strong vision for that transformation. In addition to brightening everything with white paint and a backsplash of artisan subway tile in variegated gray, she added white cabinets that now flow into white walls.

“Everything else was about scale and balance,” she says. “The neutral color palette — white, black, gray — was chosen knowing what I wanted to do with the living room-end of the space.”

But Will voted to move on to the bath.

“After finishing the kitchen and emerging relatively unscathed, I recognized that if we were going to be moving plumbing, I really wanted someone else to be responsible,” Shannon says, laughing. “I knew when I met with Sarah Lambert that she was the designer for us.”

Don Lambert, Sarah’s father and the contractor on the design team, helped realize Sarah’s answer to the odd symmetry that made the oversize bathroom seem small. A shower tucked behind a diagonal wall was uninviting — Shannon called it a “dank dungeon” — and a tub floated at an awkward angle. Separate sink counters wasted space and hindered flow.

“Shannon said to me, ‘What would you do if you could get rid of everything and start fresh?’ It was a dream starting point,” Sarah says. “I proposed we move plumbing, create a single counter with double sinks and install a vanity where one of the sinks used to stand alone. That left plenty of space for the wet room,” Sarah says.

Shannon then had to convince Will that he wanted a wet room. The idea of a tub and shower sharing a large, open, tiled space behind a glass wall wasn’t a hard sell, but Will was a bit slower to warm to a black soaking tub that is now beloved (even Tripp uses it).

“Will is a little more traditional than I am,” Shannon says. “I push him out of his comfort zone.” Black, white and gray tones unite the remodeled bath. For the custom oak cabinetry, the Lamberts created a translucent gray stain with a hint of orange in it. Instead of tile, the wall behind the sink is covered with Schumacher Combed Chevron in Black Slate, a vinyl wallpaper that evokes weathered wood.

Upon completion of the bath, the Millers were ready to finish the living room, which Shannon had already furnished comfortably with pieces from RH and Arhaus.

To further the connection with the open kitchen, the Lamberts lightened up the room. “We removed the more formal, dark-stained elaborate trim from the ceiling coffers and added a sleek white trim,” the designer says. 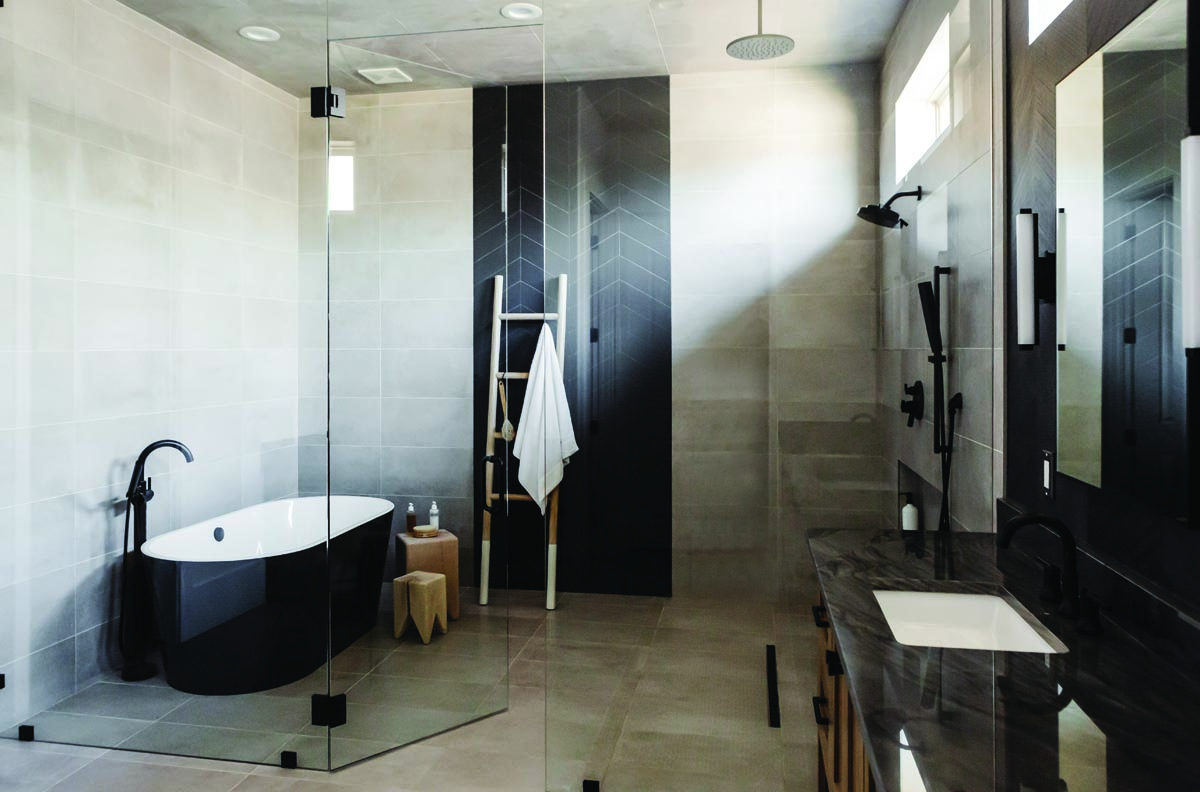 Light from clerestory windows is amplified by the glass walls of the wet room, sconces above the sinks and the light gray ceramic tile covering the bathroom floor as well as the shower walls. 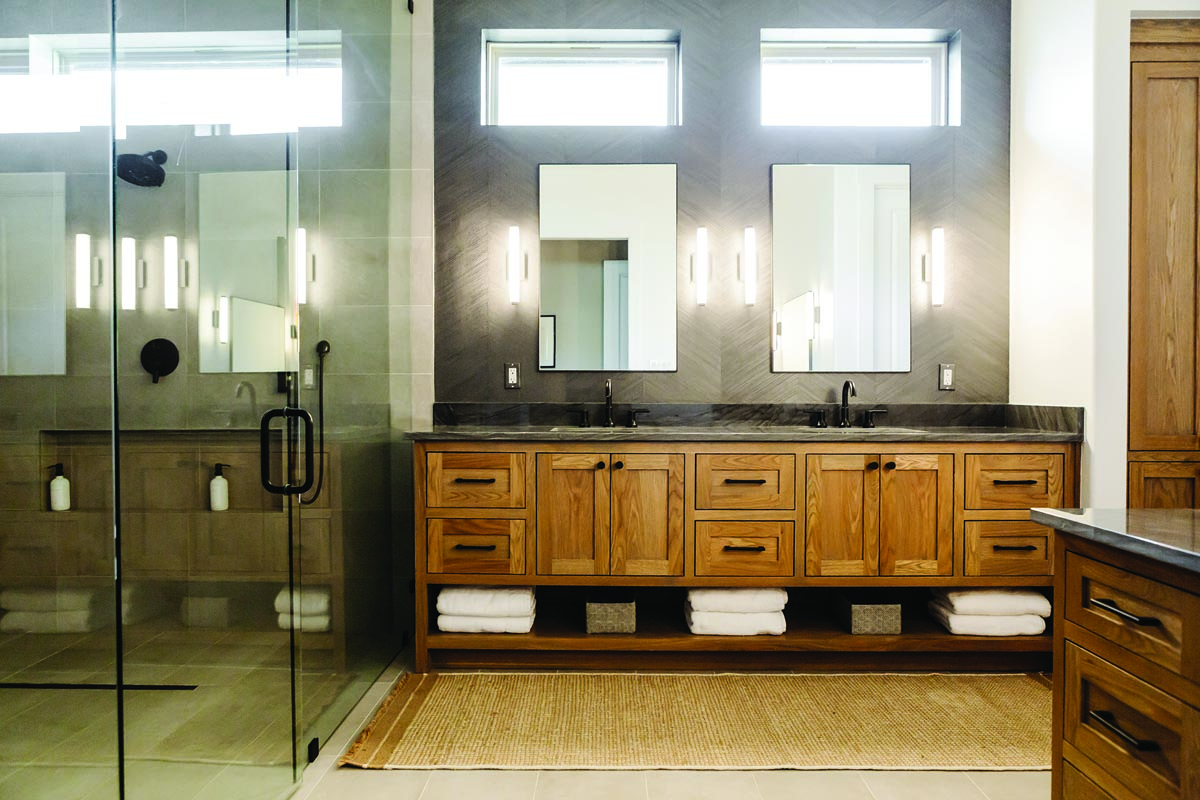 His-and-hers sinks further streamline a once overly cluttered bathroom while adding storage. The stain on the custom oak cabinetry has a subtle orange undertone.

“When the color of the wood changed, everything was streamlined and lifted. The whole space was brightened,” Shannon says.

A boldly geometric Kelly Wearstler glass box chandelier that Shannon scored from a designer friend when a client rejected it had already replaced a mercury glass chandelier. Now it was time to reimagine the glittering stacked stone fireplace and say goodbye to the inherited mirrored furniture on either side.

“For a modern, sleek look, we removed the stone fireplace and applied a concrete skim coat to new sheetrock. Then we polished, polished, polished the light gray concrete for an elegant but contemporary natural finish,” Sarah says.

Will only flinched, Shannon says, when the mantel disappeared, taking the television with it. Instead, an extendable mount in an alcove to one side allows the flatscreen to be pulled out and angled for Will’s viewing pleasure, but when it is turned off and pushed back, it almost disappears into the Phillip Jeffries black grasscloth that now covers the walls. The compromise has been a happy one. “I wanted the fireplace to be a piece of art,” Shannon says. “And it is.”

All the while Shannon was working closely with the Lamberts, she didn’t know that Will had talked to Sarah and generously expanded the budget.

“There was a point where Will and I talked a lot about things that I loved but could not get. As we got closer to the end, Will wanted to be sure I wasn’t going to be disappointed. That’s when he authorized Sarah to take me shopping,” Shannon says.

On trips to Dallas Market Center, Sarah made note of things that Shannon remarked upon. The designer remembers walking past a showroom where Shannon spotted a big piece of art that she liked. “I agreed, but Shannon said, ‘No, I like that art. I want that art. We need to go into the showroom, and you need to buy that art.’ ”

Sarah laughs. “I was pretty sure then that she was onto us.”

Shannon says there were still unexpected delights at the project’s end, as she didn’t know for sure which things from her wish list of decor and art would turn up in the “zhuzhing” Will had slyly enabled. And, yes, the final reveal included the large graphic painting in bold shades of red that Shannon had dragged Sarah to see. It now hangs on the hall wall inside the front door, visible from the kitchen as well as the living room, a bright counterpoint to all the neutrals. It’s also proof that, from interior design to the negotiations within a happy marriage, success is all about balance, give and take — and the occasional surprise. 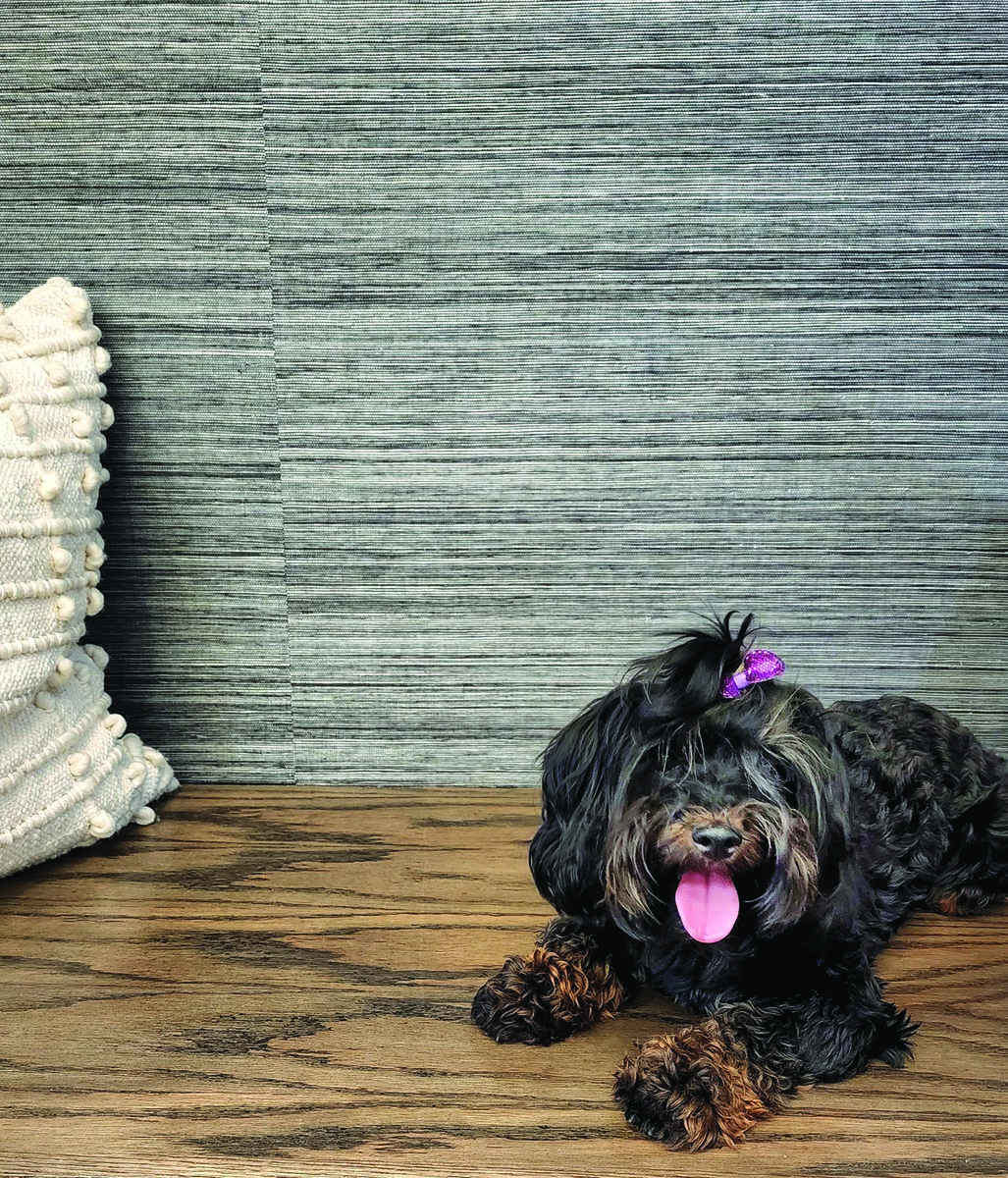 A built-in bench adjacent to the fireplace is staked out by a second family dog, Riley. The grasscloth wallpaper has the textural, contemporary look the Millers wanted for the home.