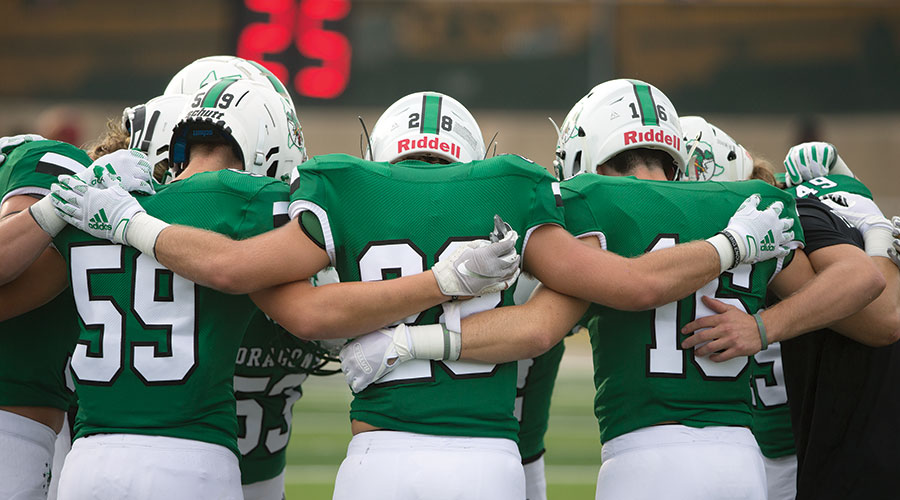 The pandemic put the Dodge Bowl on hold, but the Dragon family — from fans to cheerleaders — will play it safe when it comes to game time.

As the new season drew closer, Carroll was on the search for football games.

Yes, the eight-time state champion Dragons — kings of Texas high school football — were looking at a 2020 schedule that had more holes than a slice of Swiss cheese, and they weren’t the only ones. The COVID-19 pandemic left teams statewide not knowing if they would play or if other teams would play.

Players were not being picky.

“I don’t even care who would have been on the other side,” says receiver Brady Boyd. “It could be Alabama — I really didn’t care, if we just had a chance to play.”

Nick Saban and the Tide can relax. They don’t have to come to Texas. As medical protocol firmed up in the Lone Star State, Carroll managed to stock its schedule with enough neighboring firepower — Denton Guyer, Rockwall-Heath, Rockwall High School — to test the young Dragons.

But the nine-game slate is missing a biggie.

What would have been the inaugural “Dodge Bowl” also was sidelined by the coronavirus. The Aug. 28 game pitting son head coach against father head coach in a Carroll versus Austin Westlake matchup at AT&T Stadium was touted as a power-laden showcase (also featuring Longview versus Temple). It was entirely fitting that the location is where high school champions are crowned.

In an understatement, coach Riley Dodge says it was “a little disappointing.” 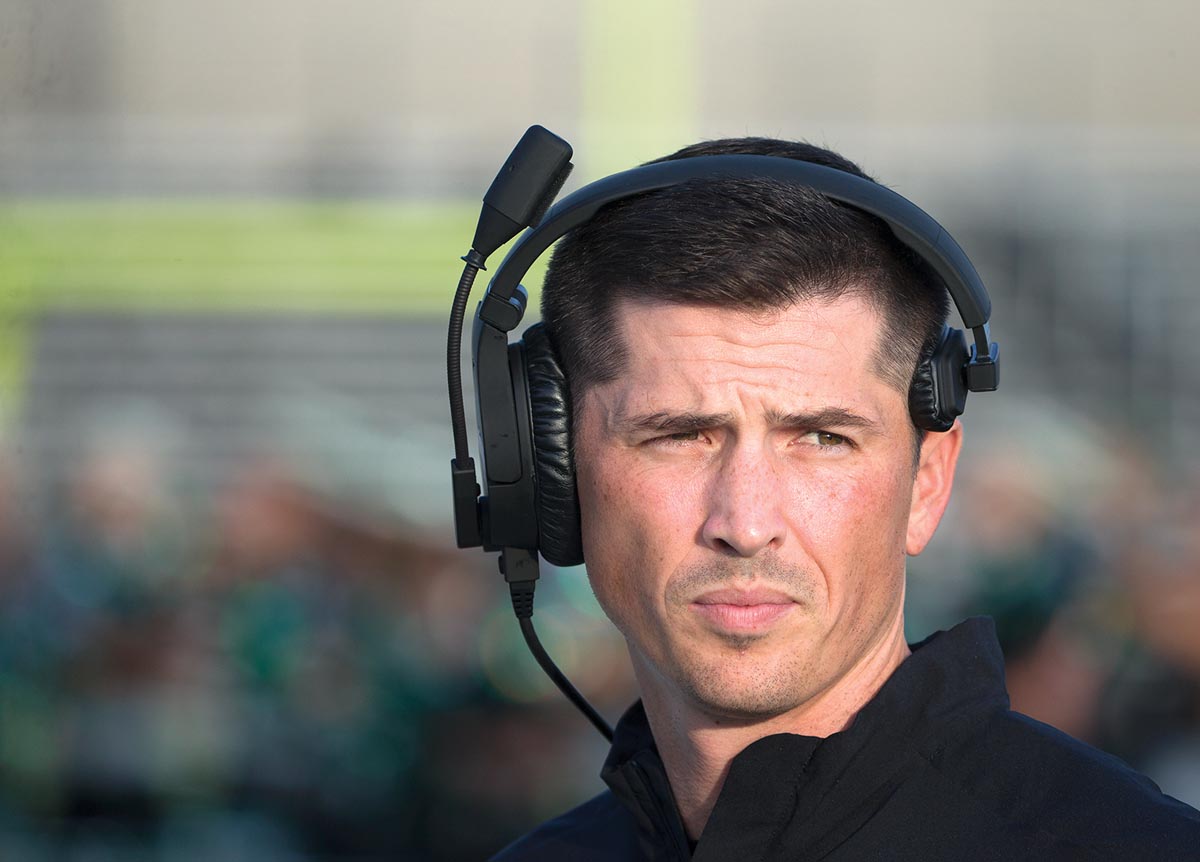 The cancellation of the August “Dodge Bowl” was “disappointing,” says Riley Dodge. 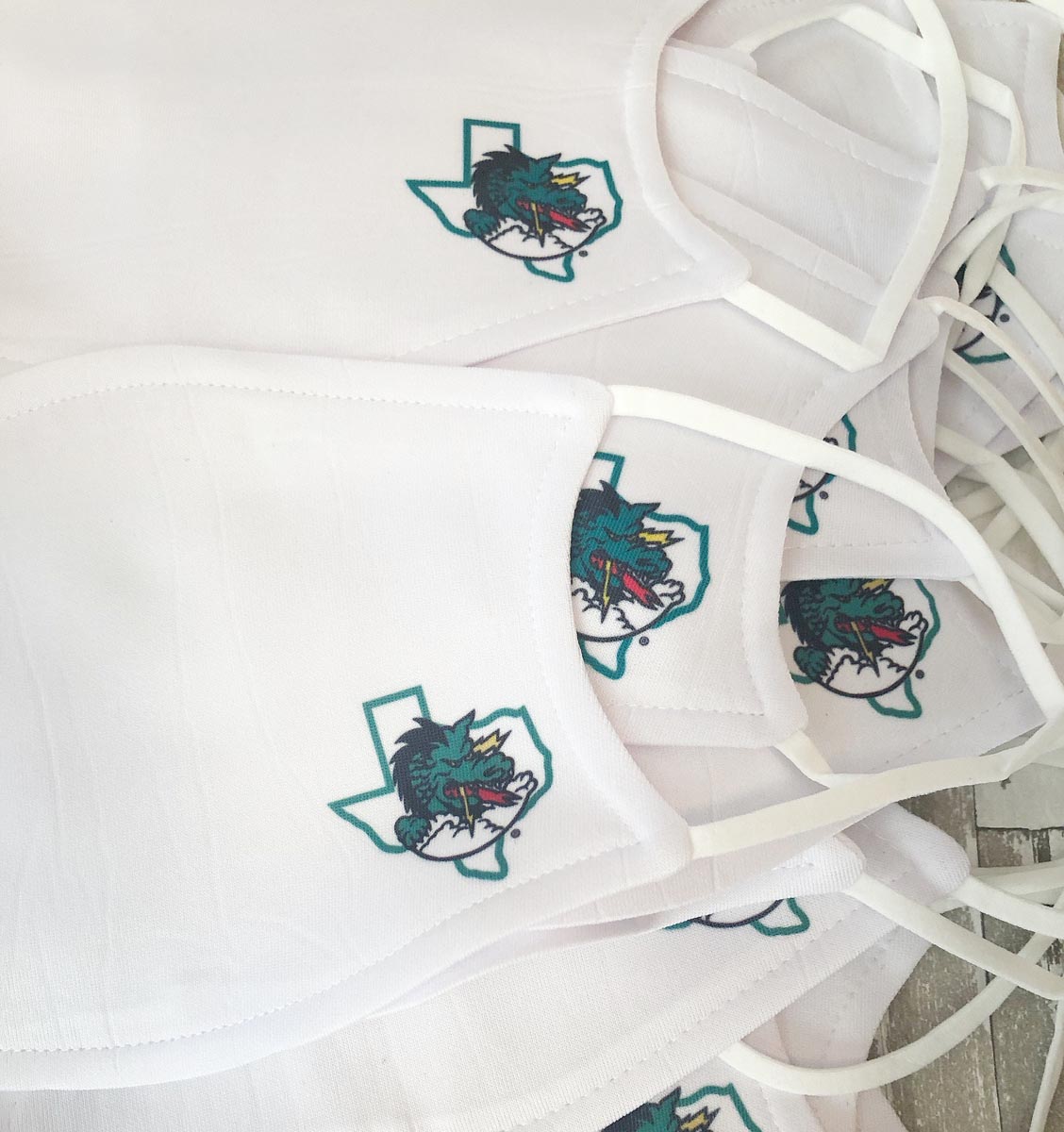 Masks will be required to watch a game at dragon stadium, but fans can wear their hearts on the face coverings.
Photo courtesy of wrapsidazy.Com

When the UIL announced a delayed start for 6A and 5A schools, the Dodge Bowl didn’t survive.

“It would have been a unique thing to get ready for,” Westlake’s Todd Dodge, the former Carroll boss, told the Austin American-Statesman. The veteran coach put showy hardware for three state titles in the Dragons’ trophy case, with Riley at quarterback for two of those championships. This would have been Todd’s first chance to go headset to headset against his son.

The matchup would have tested each coach’s deep knowledge of the other.

“Everything we do is so similar, from the verbiage to the audibles,” says Todd. “I mean, I could take his quarterback and run our system, and he could do the same with my quarterback.”

Maybe next year. They’re planning on it.

But there is a “this year,” and the Dragons, like other teams, created rules and procedures to stay safe in the age of the virus. That means wearing masks in the fieldhouse, limiting gatherings, bringing your own water bottle, hustling to the bus after games (no more extended postgame greetings on the field — sorry, Mom and Dad) and other common sense approaches.

Sideline-access passes, for example, are going to be tougher to snag, as fewer will be issued.

“When we’re in here, in the facility together, they enforce the safety protocols,” says Boyd.

Even the traditional weight room setting, with its clanky banging of metal and players gathering to raucously cheer on a teammate for an extra rep or two, has been silenced for now. The weights, benches and racks were moved to the indoor practice facility, where they ring the perimeter, spaced out like the posts along a ranch fence.

It’s a new way of doing things, and it occasionally may be inconvenient, but the Dragons want to get on the playing field after a summer of uncertainty.

“It was weird, but it’s a lot easier to stay home and be disciplined when you know you’re coming back,” says cornerback Avyonne Jones, who said his family purchased a weight set to avoid going to gyms. “There were obviously doubts. But Coach Dodge kept us in the loop with everything.

As soon as we got the go-ahead, it was time. We just wanted to know, so we could get ready and put the pads on.”

Good thing, because even without a Dodge Bowl, there was still a scrimmage against toughie DeSoto awaiting the Dragons before the regular schedule, which also includes traditional rivals in Keller, and V.R. Eaton and Byron Nelson in the Northwest ISD. 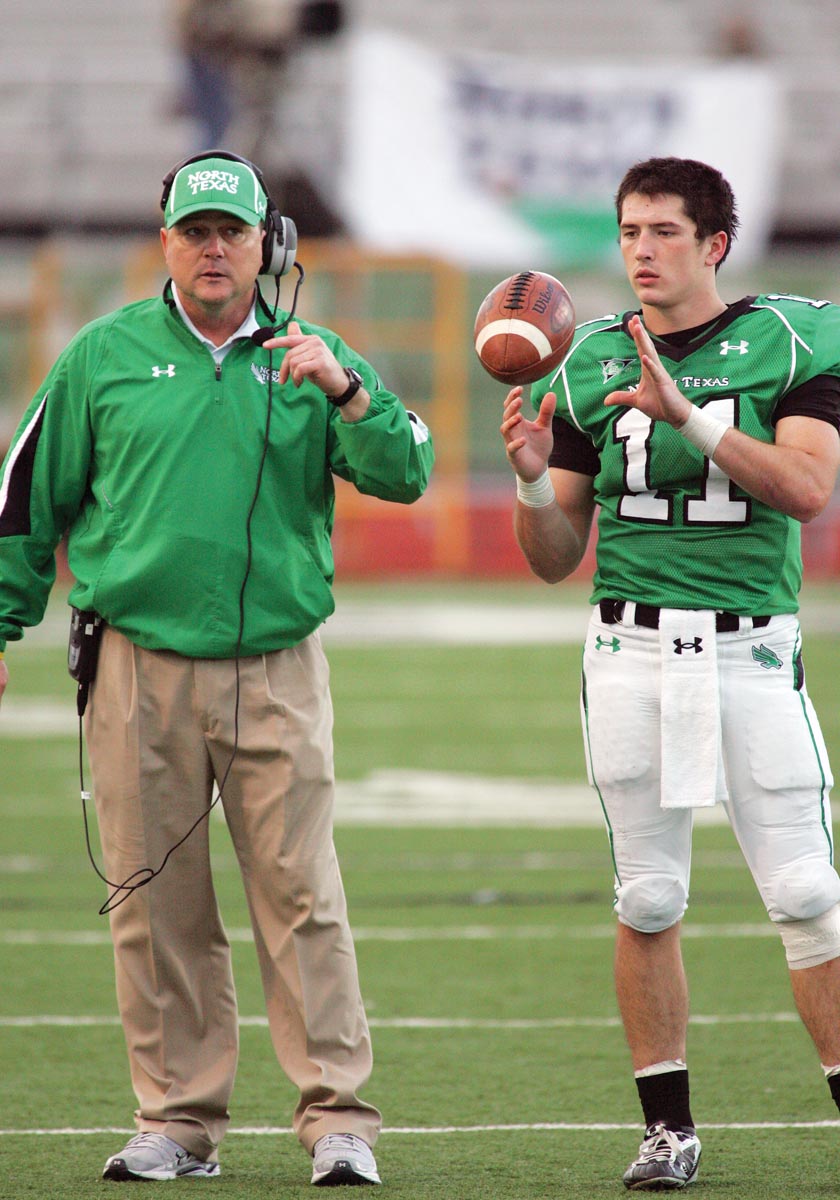 In addition to playing for his father at Carroll, Riley and Todd also were a tandem at North Texas.
Photo by Ray Carlin/Icon Sportswire. 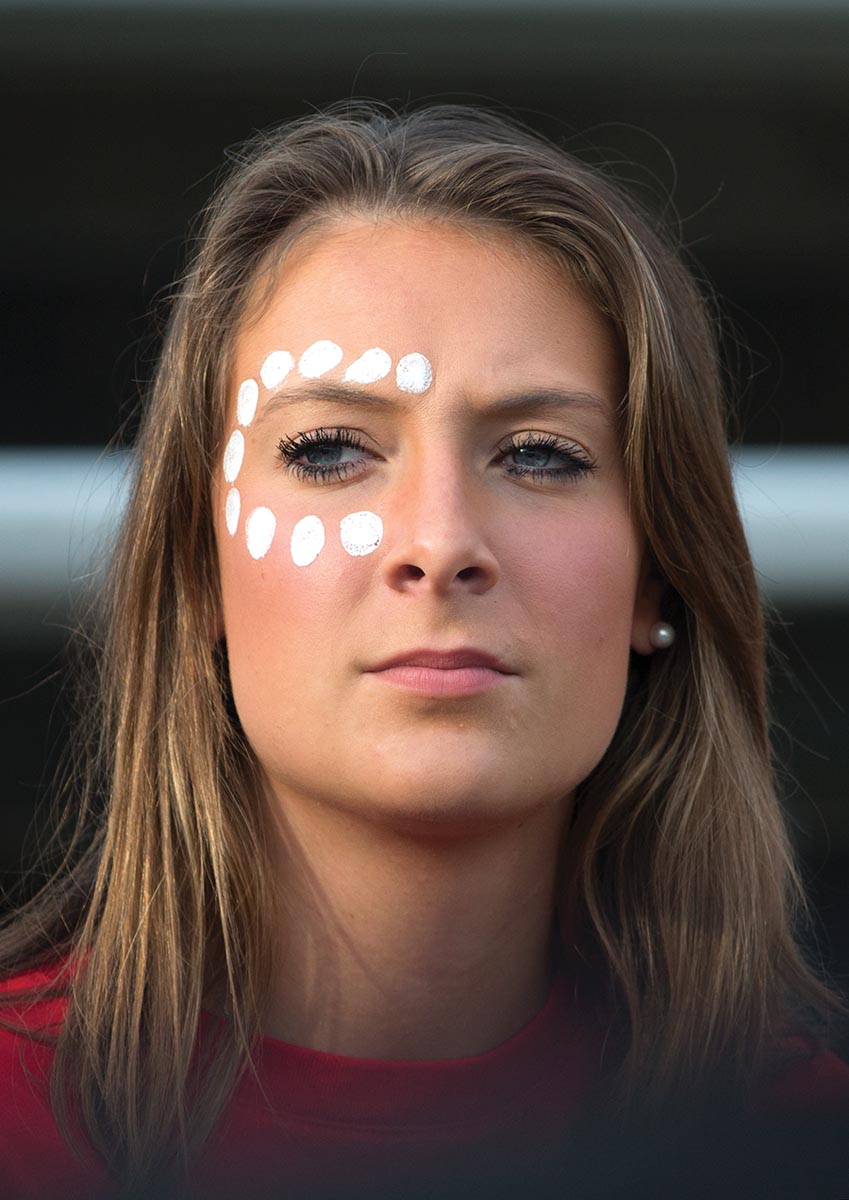 Carroll football fans won’t be as numerous in 2020.

The Dragons will meet them with the state’s top-rated 2022 quarterback, Quinn Ewers, on their side, plus a traditionally solid set of receivers and a speedy batch of linebackers and DBs. The 2020 edition of Carroll football is an eager group ready for anything — the bunch in Tuscaloosa, Alabama, notwithstanding, perhaps.

“We’re untested,” Riley Dodge says. “We have a lot of guys who are talented; they just haven’t played in the Friday night lights. It’ll be interesting.”

The Spirit is Willing

The sideline chants and routines the cheer squad offers to get fans through the lulls of the game and entertain the crowd will still be a thing in 2020, though diminished just a bit.

Cheerleaders will be required to wear masks and maintain social distancing. That means there will be no stunt sequences. They’ll also have to bring their own water and leave the usual community ice chest in the offseason closet. The Belles drill team will perform, too, while adhering to COVID guidelines. And there will only be a pep band at games. The full marching band is taking the season off.

School district officials also have put a moratorium on pep rallies. The cheerleaders are planning to include video routines posted as part of the school’s digital announcements to keep everybody’s attitude adjusted just right on Fridays.

Home games at Dragon Stadium will feature room for a little social distancing, a term that a year ago no one had ever heard of outside the context of a slow dance at homecoming.

In accordance with University Interscholastic League directives, as well as Gov. Greg Abbott’s executive order, the home and visitor sides each will be limited to 50 percent capacity.

“That will set our number at right under 3,500,” says Taylor Fielder, the district’s athletics operations and facilities coordinator.

The visitor side will be limited to a little more than 1,600.

All tickets sold will be general admission. Season-ticket holders from 2019 and parents with students participating will be able to buy two tickets early, beginning Sunday mornings. All others will go on sale at 8:30 a.m. each Tuesday of game week and be sold on a first come, first served basis.

Face coverings: Don’t forget them. Per the UIL, the wearing of face coverings, including non-medical grade disposable face masks, cloth face coverings (over the nose and mouth) or full-face shields to protect eyes, nose, and mouth, will be required of all employees, parents, visitors and students 10 years of age or older.

That’s for any UIL activity.

The concession stands will sell pre-packaged items only.

The times, they are a-changin’ … for the time being. 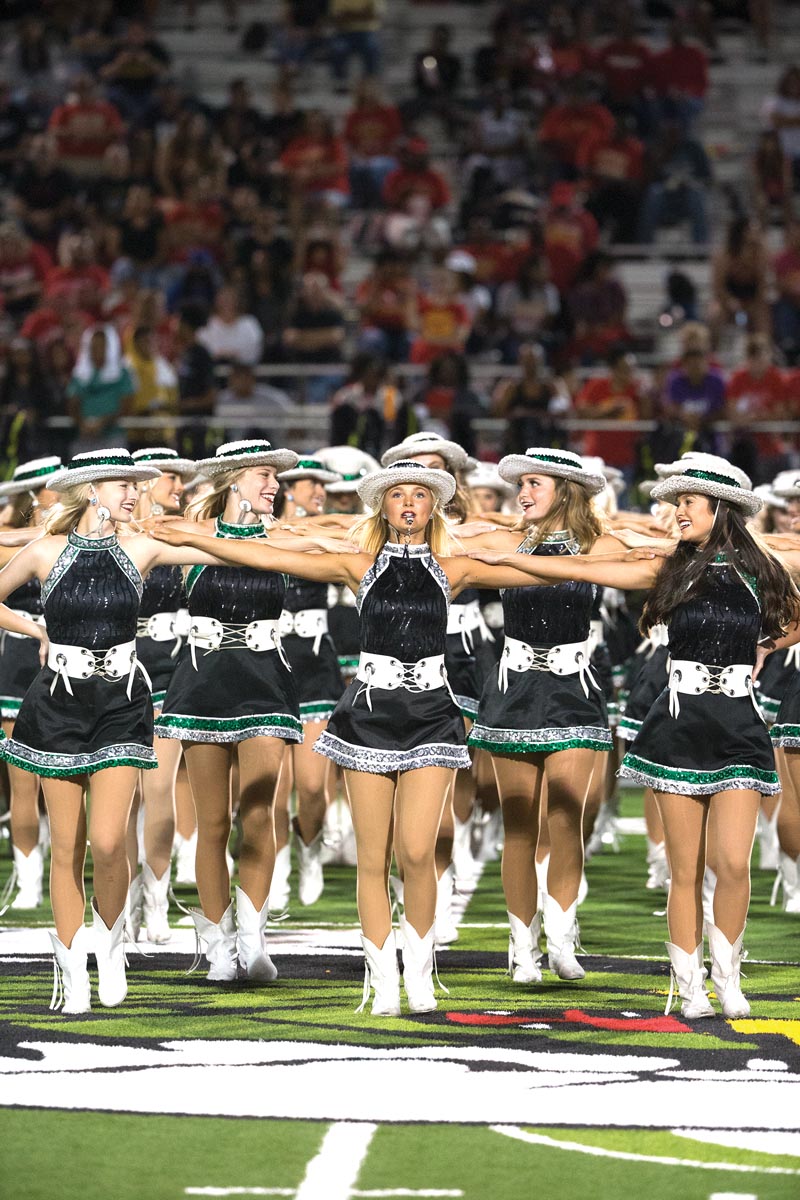 This season, the Belles will probably have to perform at more than an arm’s length.