Press enter to begin your search
FeaturesIn the Kitchen 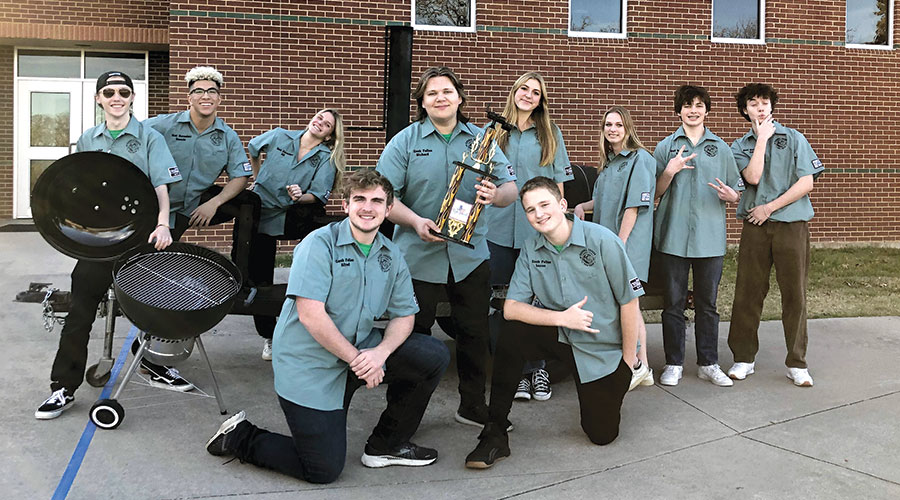 This Southlake Carroll team practices in the high school parking lot, assembles its own equipment and was almost anonymous to fellow classmates until it was outed by a social media congratulations in December.

The CookFellas, one of the school’s two competition barbecue teams, was named Reserve Champion at a December regional qualifier held by the National High School BBQ Association, giving the school some new hardware to claim a spot of honor in its trophy case. Twitter and Facebook posts were met with an almost universal response: “I didn’t know Carroll had a barbecue team.” 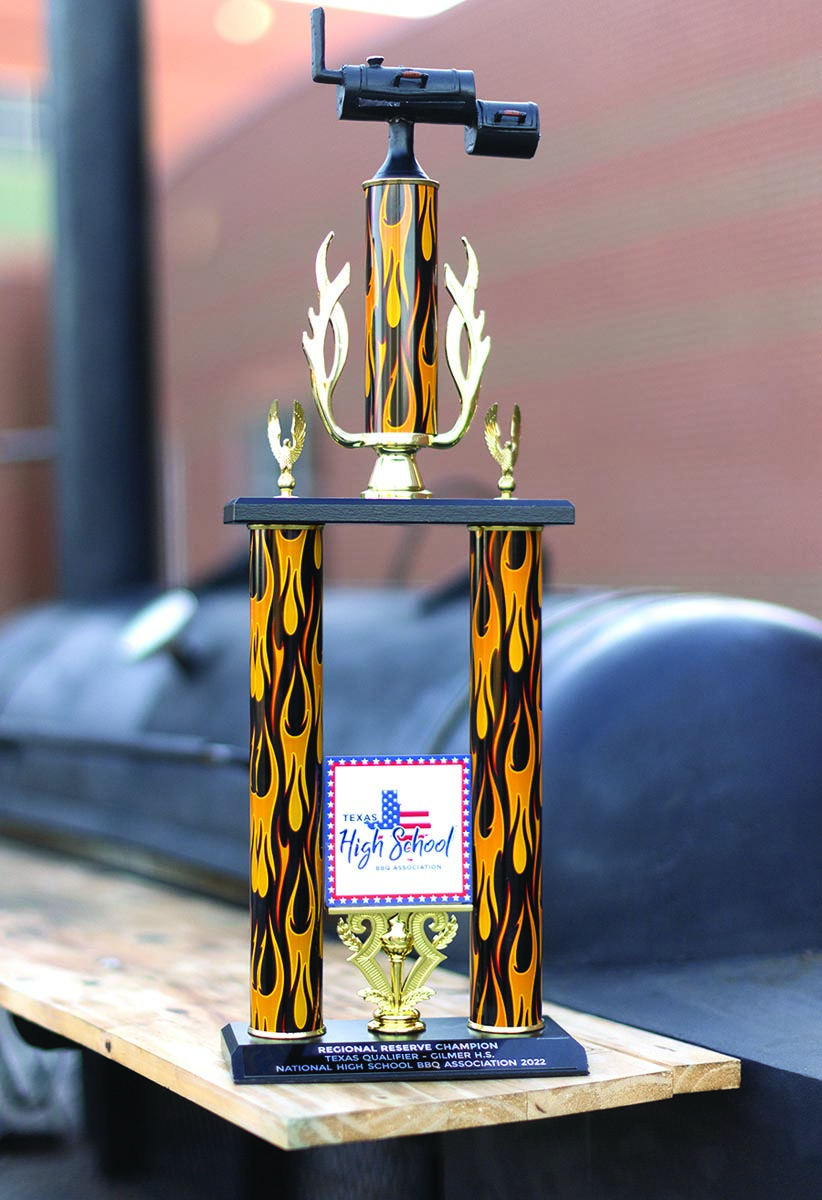 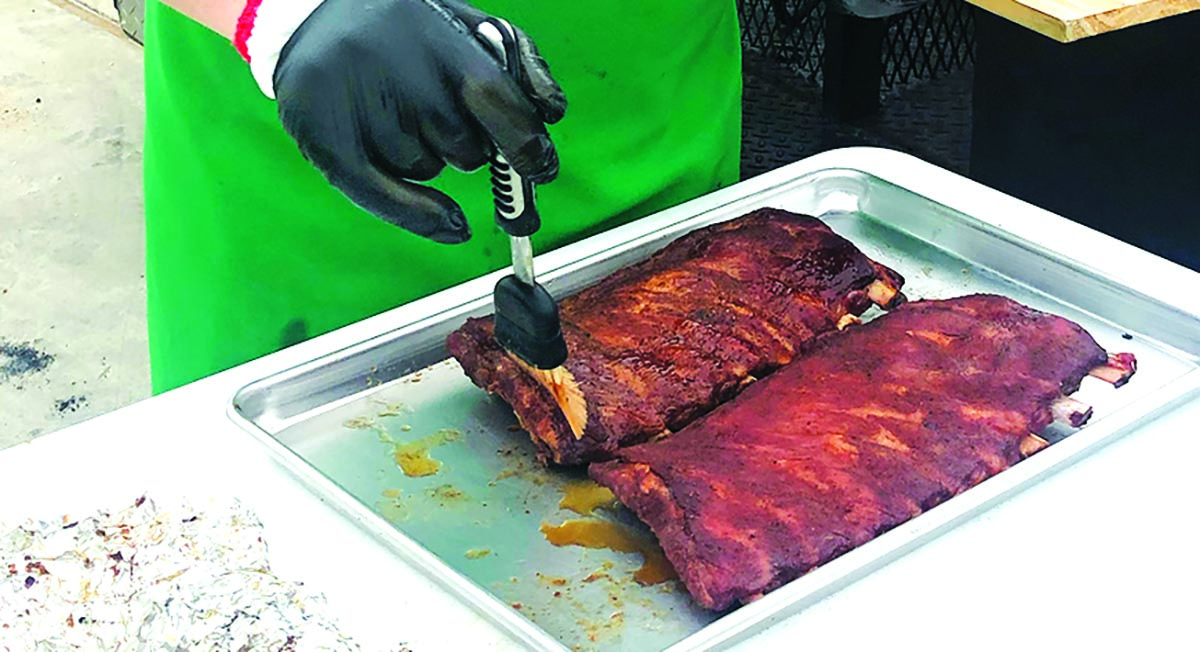 Made up of four guys and two gals, the CookFellas finished first in the steak and chicken categories, second for burgers and fourth for ribs. Cami O’Neill won first in the dessert category with her pineapple upside down cake made in a Dutch oven over coals. (We were happy to test her recipe; see Page 24.)

While most of us think of barbecue competitors as using only the low-and-slow process, the high school competition also includes live-fire cooking. Some of the members we spoke with admitted that they had not done much cooking of any type before joining the CookFellas. Between that and the team not having any competition experience, the results are surprising … and sweet.

We wondered who these students are — given that no one in the group has a culinary background — and why they wanted to learn the fine art of grilling the perfect burger or smoking pork ribs. Both Alfred Hale, a senior, and Luke Fulkerson, a ninth grader, admit it was girls who talked them into checking out the team. Both also say that, subsequently, the same girls never showed up, but that the meeting drew their interest.

“I’m new to Southlake, too,” says Fulkerson, “so I thought it would be a good way to meet some people and make friends.” Both are members of the trophy-winning contingent of CookFellas and say that making a good steak has been their favorite part of the process.

Unlike participants on the school’s other competitive teams, these students are part of the DECA (Distributive Education Club of America) program. DECA offers students programs and activities — everything from business to barbecue — that complement their regular education. 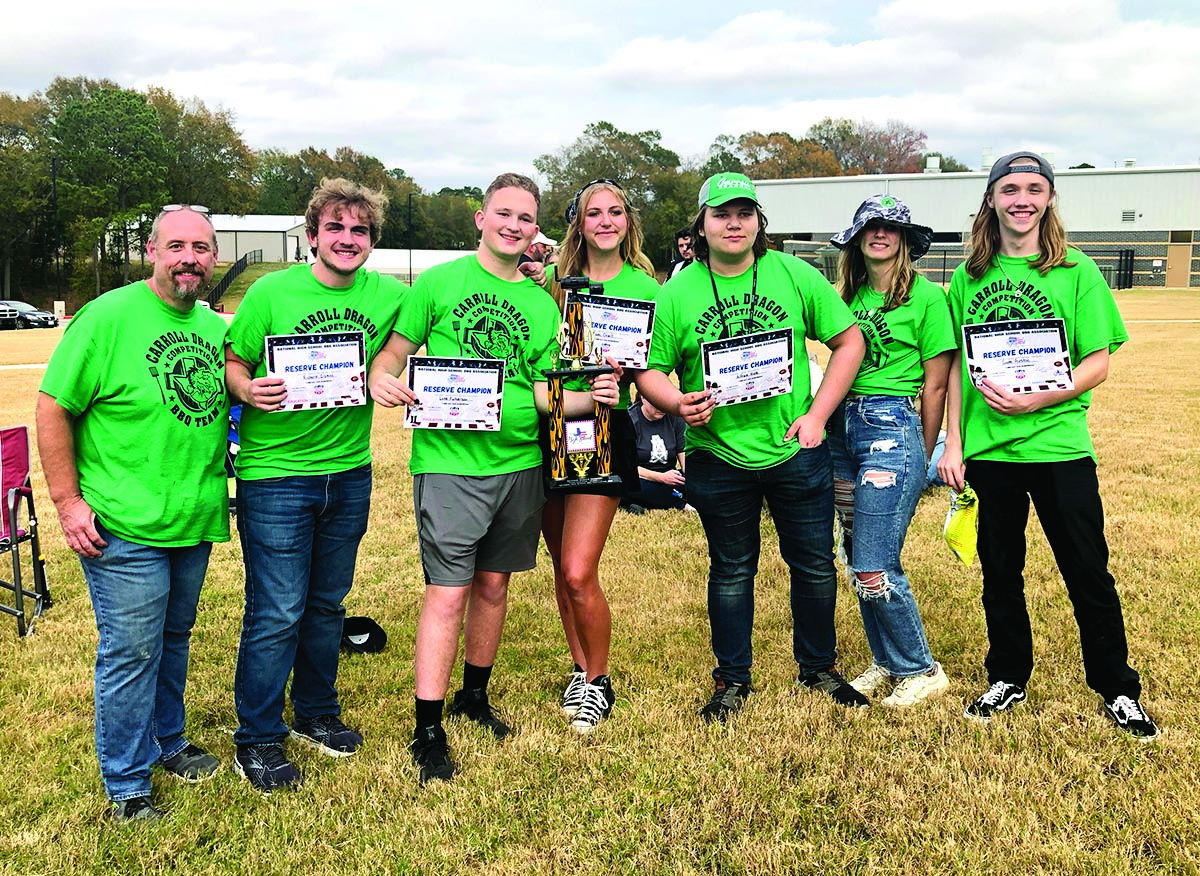 Scenes from the team’s victory at the Gilmer regional qualifier prove cooking is team sport. Photos courtesy of Ken Goodman 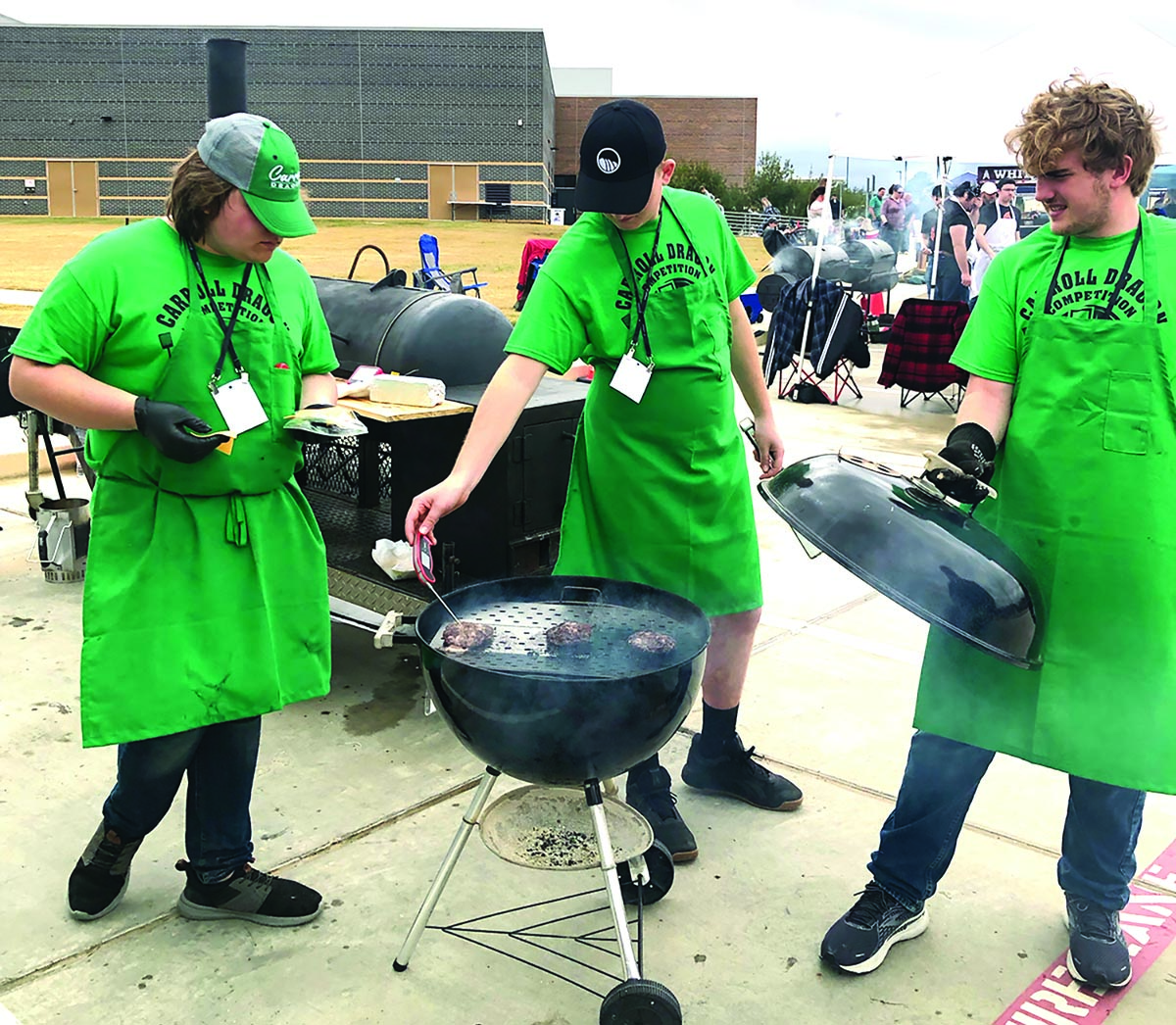 Ken Goodman, the longtime public address announcer for Carroll ISD, is the coach, with support from wife Kim, who is Carroll’s department chair for the school’s Career & Technical Education program.

Ken’s title is actually “coordinator,” as he says the kids work with and take instructions from each other during competitions.

“Most of the schools we compete against have a culinary program,” says Ken. “Carroll does not, so we don’t have many of the resources of our competitors.” Since the teams aren’t sanctioned by the school, they’ve sought out donations from the public and sponsors, which now include barbecue rub maker SuckleBusters, and have a professional mentor in Joe Torres of Torres Cooking Concepts, based in Justin.

Ken helps with details such as getting supplies and coordinating travel, but the highschoolers are on their own during competitions. “That’s the beauty of this; they learn to work together and problem-solve, whether it’s making sure they have enough hot coals or putting together the finished product for judging.”

Next up for Carroll is a March 4-5 event in Muenster with both teams competing. The national state championship at Burnet is in May; a top 10 finish there will get them to the national championship at Round Rock in June. (Check out dragonbbq.wordpress.com/schedule for more information.)

Until then, Ken says the team will be working on its brisket and beans. So if you live near Carroll High and catch a whiff of either, you know it’s practice time.

Note Prepare 24 hot coals/charcoal briquettes. Must be white-hot when ready to bake the cake.

Heat kitchen oven to 350 degrees and place uncovered Dutch oven and lid inside for 25 minutes.

Stir dry ingredients together in a large bowl. Blend remaining ingredients, one at a time, until all ingredients are wet. Do not overmix.

Remove heated Dutch oven and lid; set lid aside. To make topping, melt butter in heated Dutch oven; sprinkle with brown sugar. Do not stir. Arrange pineapple slices in a single layer on mixture and place a cherry in the center of each slice.

Pour cake batter over fruit. If batter is too thick, thin slightly with pineapple juice. Do not smooth batter once it is in the Dutch oven.

Cover with lid and place Dutch oven atop 15 white-hot coals arranged in a checkerboard pattern in an outdoor grill. Using tongs, place 9 hot coals atop the Dutch oven lid.

Bake for 25 to 30 minutes or until wood pick inserted in middle of cake comes out clean.

Remove top coals, lift oven from heat and set on heat-proof surface. Remove lid. When cake is slightly cool, run a knife around edges to loosen it and place an inverted platter over oven top. Slowly invert oven and platter and rest on a solid surface. Tap bottom and sides of oven with a wooden spoon. Slowly lift oven from platter, releasing cake with a slight shimmy. 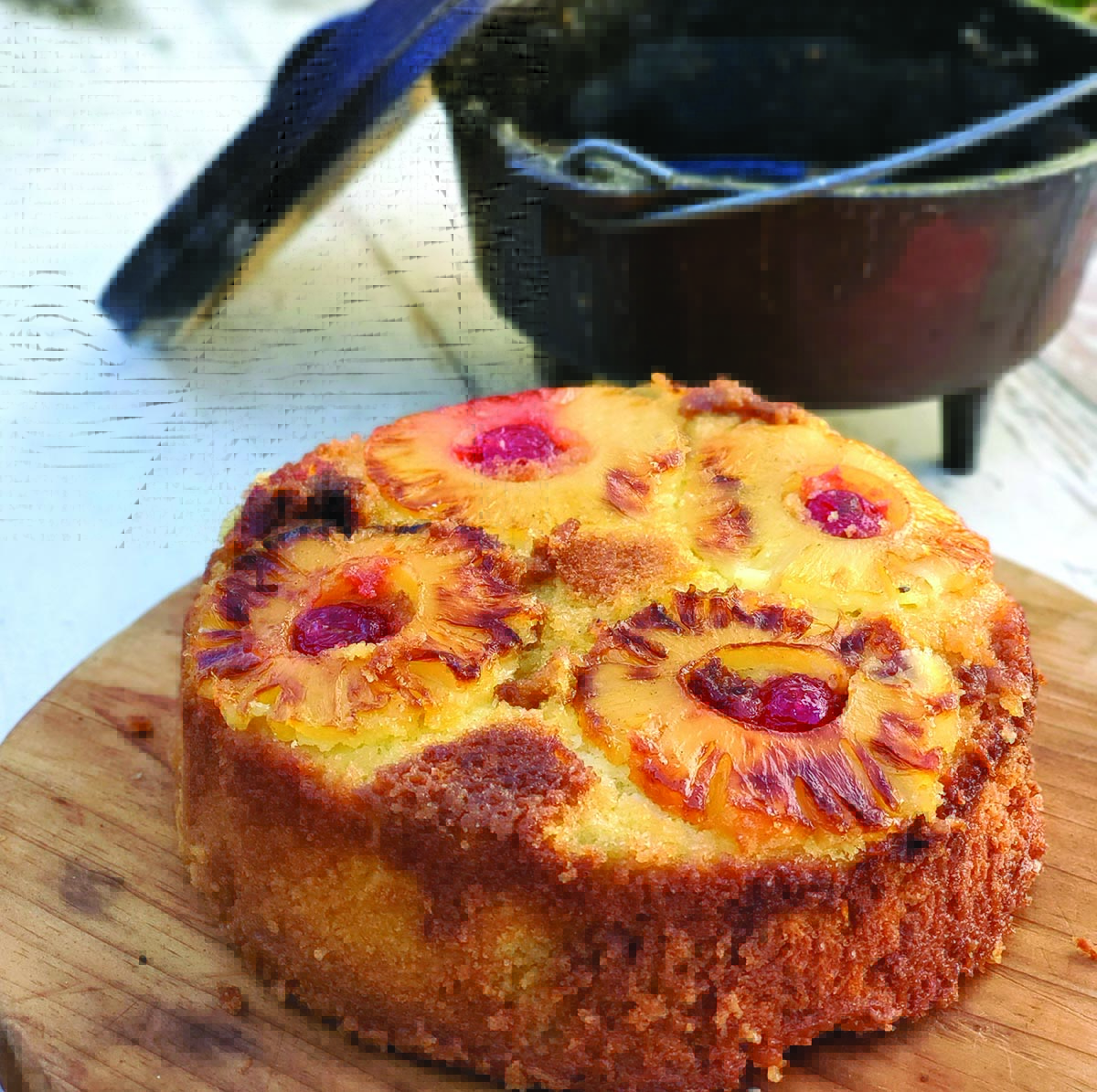 Dutch oven dessert is a winner

Dessert is doable on a grill — or even a campfire — as long as you have enough hot coals and a 12-inch Dutch oven. (Adjust cooking times and fruit slices for a bigger or smaller vessel.) Removing the lid and letting the cake cool slightly before you flip it out is key to keeping the pretty topping entact, but don’t fret if yours breaks up. Deliciousness is guaranteed in any case. To make things even easier, use prepackaged cake mix — substituting avocado oil for vegetable oil — for the batter and preheat Dutch oven in your kitchen oven. In December, this cake won Carroll barbecue team member Cami O’Neill first place at a regional national qualifying cookoff.