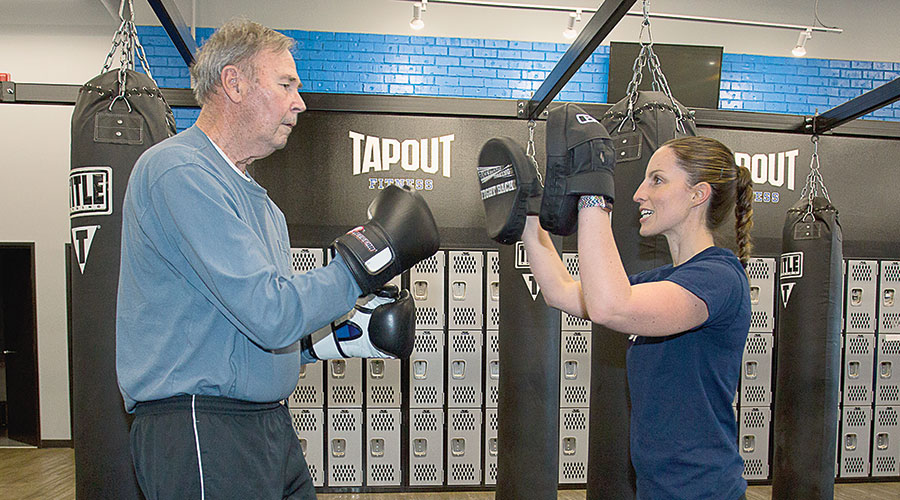 As “The Twist” reverberates throughout a Southlake gym on a weekday morning, a small group of seniors try their best to land uppercuts on punching bags to the beat of the infectious Chubby Checker classic.

Their skill levels differ, but all are determined and take the class seriously. And they all share one thing in common that has brought them to the gym: They have Parkinson’s disease.

This nervous system disorder that affects movement cannot be cured, and symptoms, which differ in each person who has it, worsen over time. Even those with early stages might have a facial expression that shows little or no emotion, or slightly slur words when they speak. 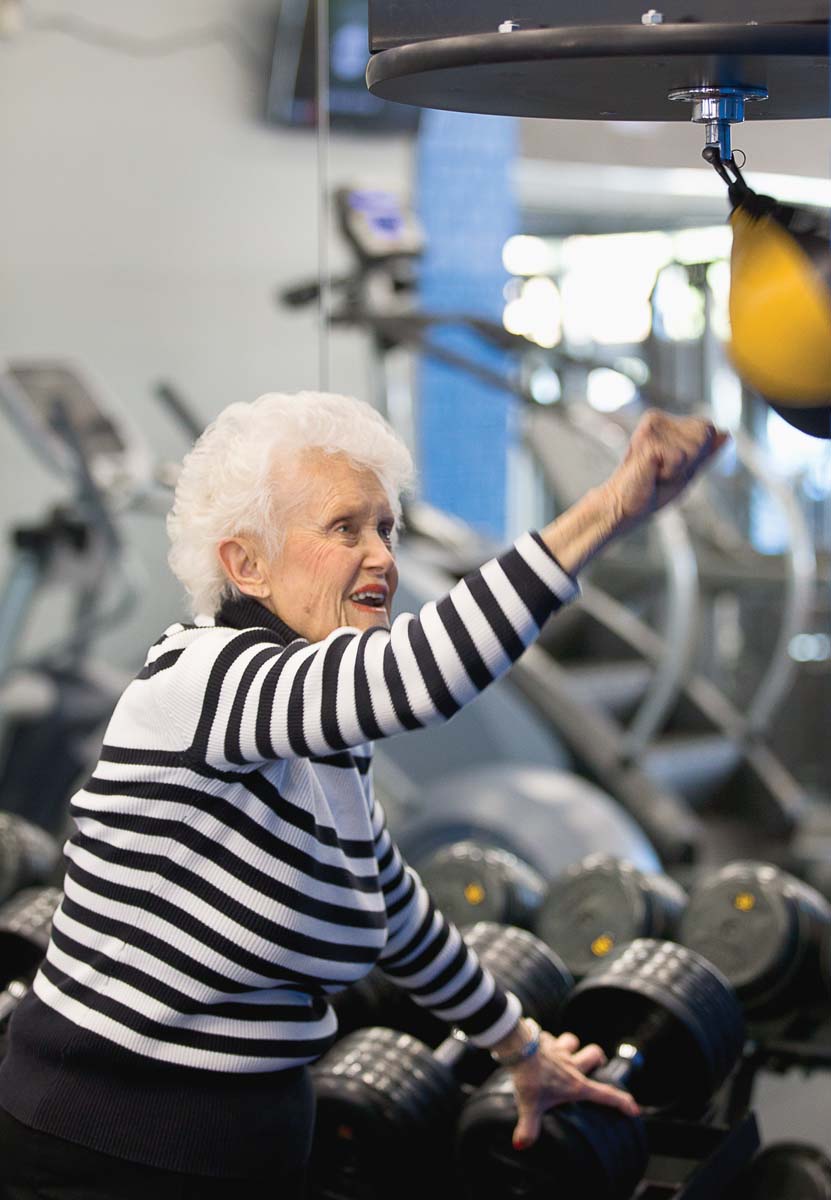 Carolyn Myers, the lone woman in the class on this particular day, works on the speed bag. 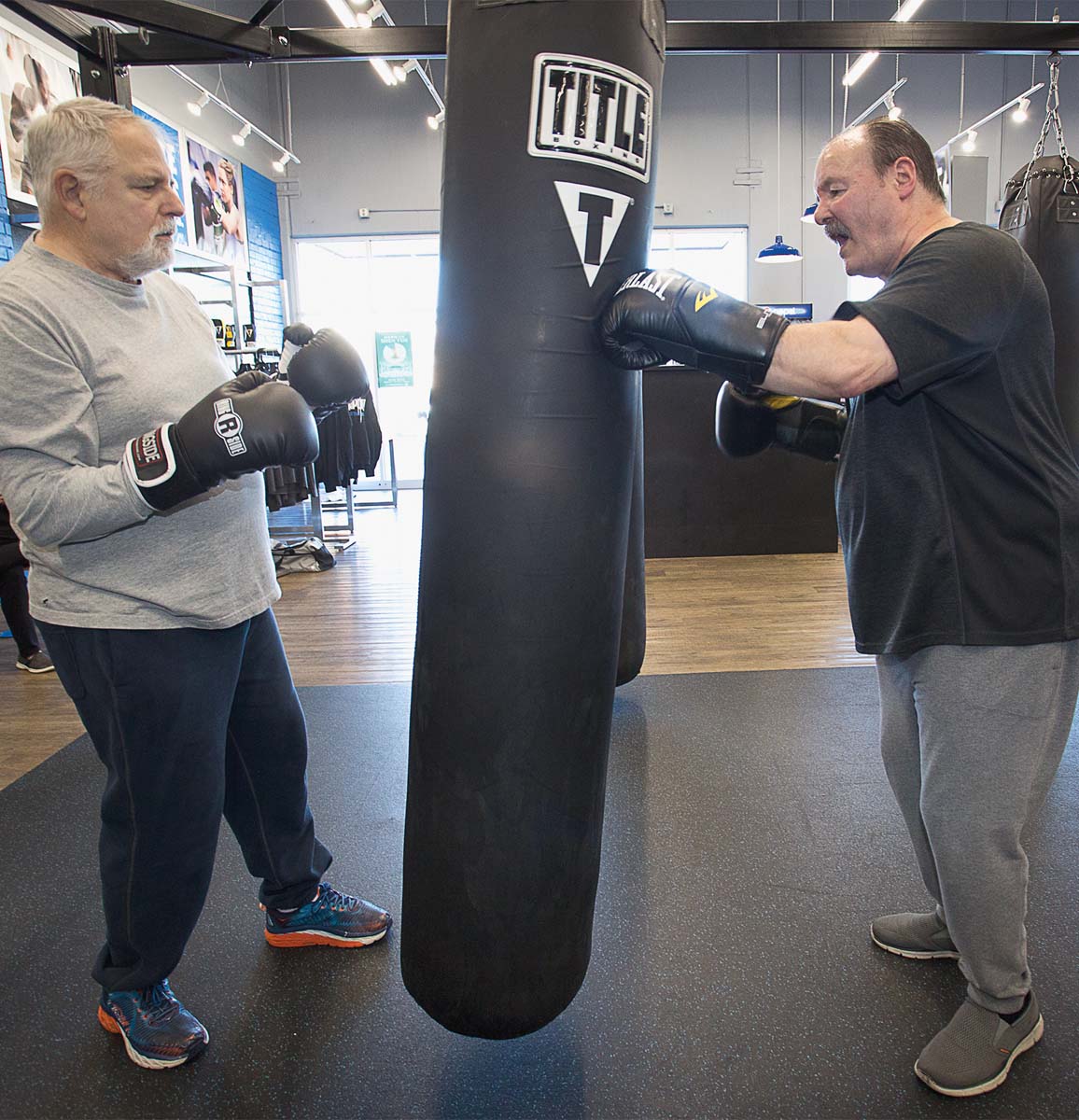 Gerry Harris, left, and Randall Gerner work opposite sides of the heavy bag.

Cause and prevention of Parkinson’s remains a mystery, and individuals find their own ways to live with the disease. Exercise can target certain symptoms, and boxing has become popular to help men and women work on everything from balance to hand-eye coordination.

It’s why Rock Steady Boxing, now a nonprofit organization, was created in 2006 by a 40-year-old Indiana man with early-onset Parkinson’s who turned to a friend with boxing experience to help create a workout program. Rock Steady Boxing spread across the country, and recently arrived in Southlake.

The class meets twice a week at Tapout Fitness, a gym outfitted with punching bags and nonskid floors. Some sessions might have just a handful of men; other times, as many as 12 participants — and occasionally one or two women — fill the space. Classes are led by husband-and-wife team Austen and Mallory Spoonts.

The duo launched the local franchise (and another at a gym off Preston Road in Dallas) last July and quickly realized its potential.

“There are 14 locations in the greater Houston area,” says Austen, “but none here.”

Mallory is a board-certified clinical specialist in neurologic physical therapy. She first heard of the unique non-contact program because its founder happened to be her professor at the University of Indianapolis, where she graduated with a doctorate in physical therapy.

Her passion for helping people with Parkinson’s disease made Mallory a natural fit as the area’s first owner of a Rock Steady Boxing franchise.

Austen, a Texas native whose background is in oil and gas, doesn’t have a traditional medical background like his wife, but he shares the desire to help his students and has taken online and hands-on training. 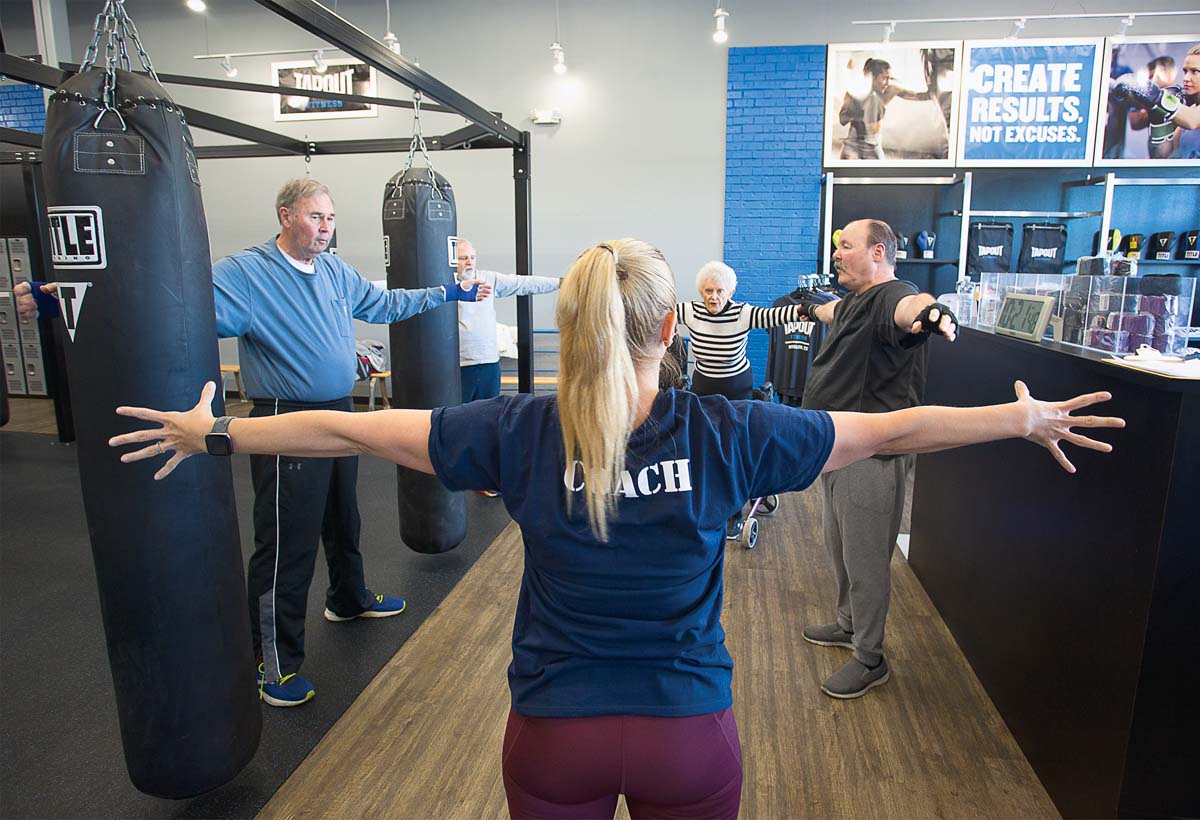 Not everything is centered around boxing. Coach Lisa Aschenberg leads a group in stretching exercises on their feet and on their backs. 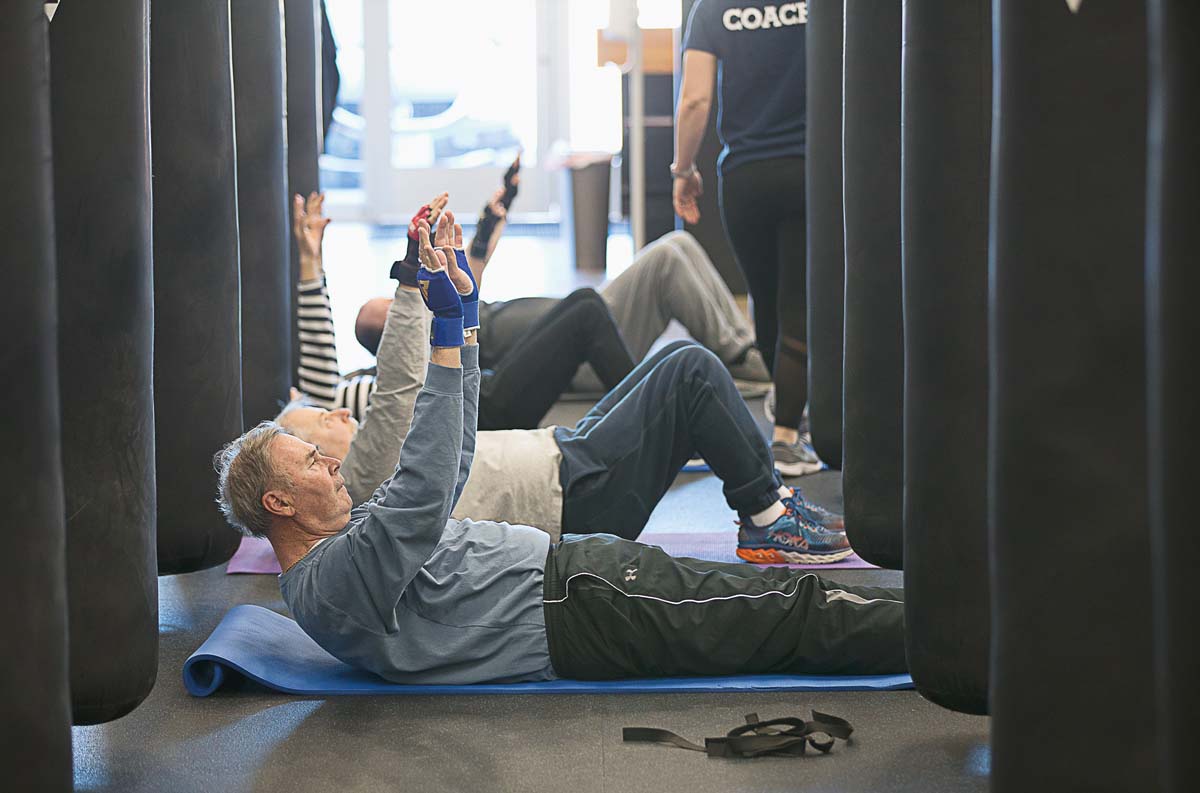 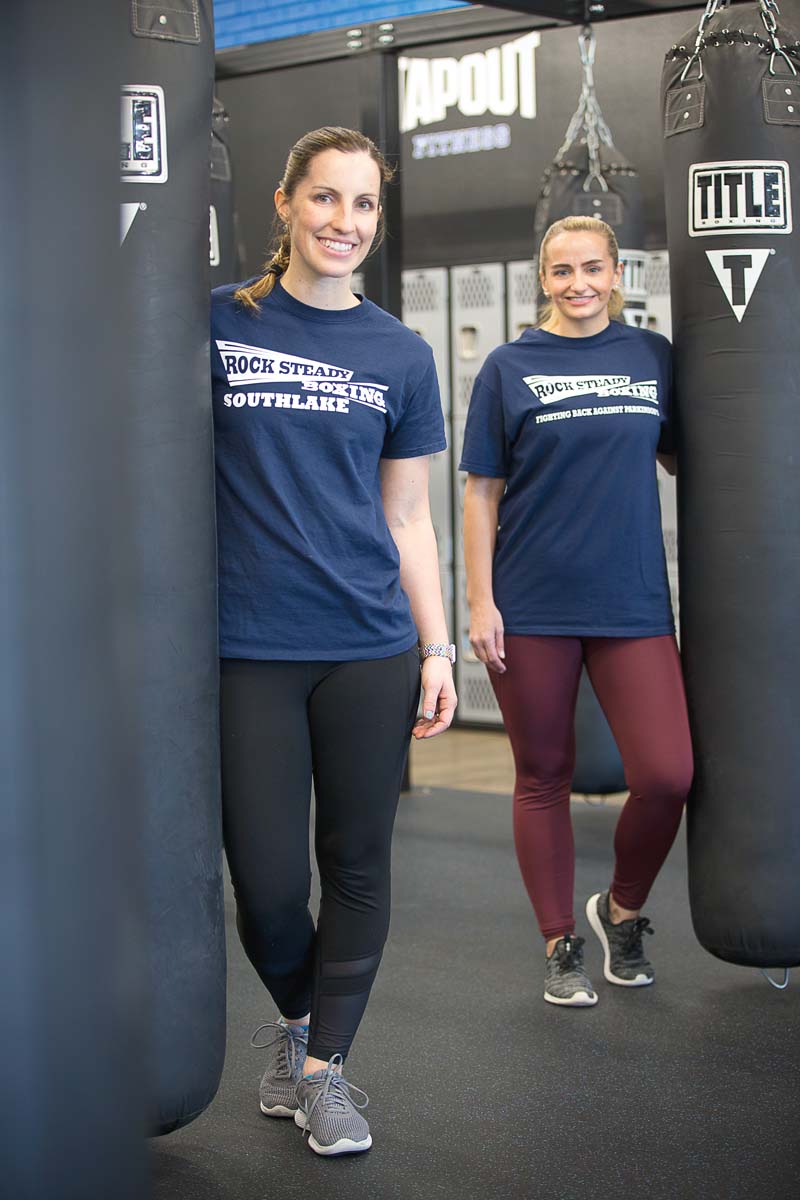 Mallory Spoonts, left, is one of the owners of Rock Steady Boxing in Southlake and Dallas, and has a background in neurologic physical therapy. She also studied with the man who founded the nonprofit program. Lisa Aschenberg, part of the RSB team, has a background in ballet, running and weightlifting.

Lisa Aschenberg rounds out the team. A graduate of Texas Wom an’s University in Denton with a degree in nutrition, Aschenberg has a background in ballet and is a competitive runner and weightlifter.

During a typical class, Austen works one-on-one with participants, alternately joking (he gives nicknames to each boxer) and gently guiding them in voice exercises, bilateral movements and a little sparring — all movements and actions that tend to decline in Parkinson’s patients. The students have varying levels of symptoms, and the couple tailor the exercises to each individual.

Meanwhile, Mallory guides the core of the class through exacting combinations of arm work and footwork that might flummox a first-time boxer, let alone a person with motor system limitations. She patiently encourages the group, and then moves with them through about 20 minutes of circuit training.

“I’m their problem child,” says one regular with a laugh. Another student tries to bargain with Austen, asking if they can do half the class, then walk across the parking lot to the Starbucks for breakfast. The gym is heating up, and Austen takes off his warmups. The group is figuratively on fire — one participant also goes to the classes in Dallas — and it’s all a testament to the couple’s patience and dedication.

Sweaty yet energized, the participants decamp. One man admits he’s ready for his usual post-class afternoon nap. Austen and Mallory move on to complete an hourlong assessment on a new student. It’s clear the couple are energized by seeing the progress their students are making. Austen says a recent highlight was hearing that a student was able to stop taking his antidepressant medication: “That was the greatest compliment.” 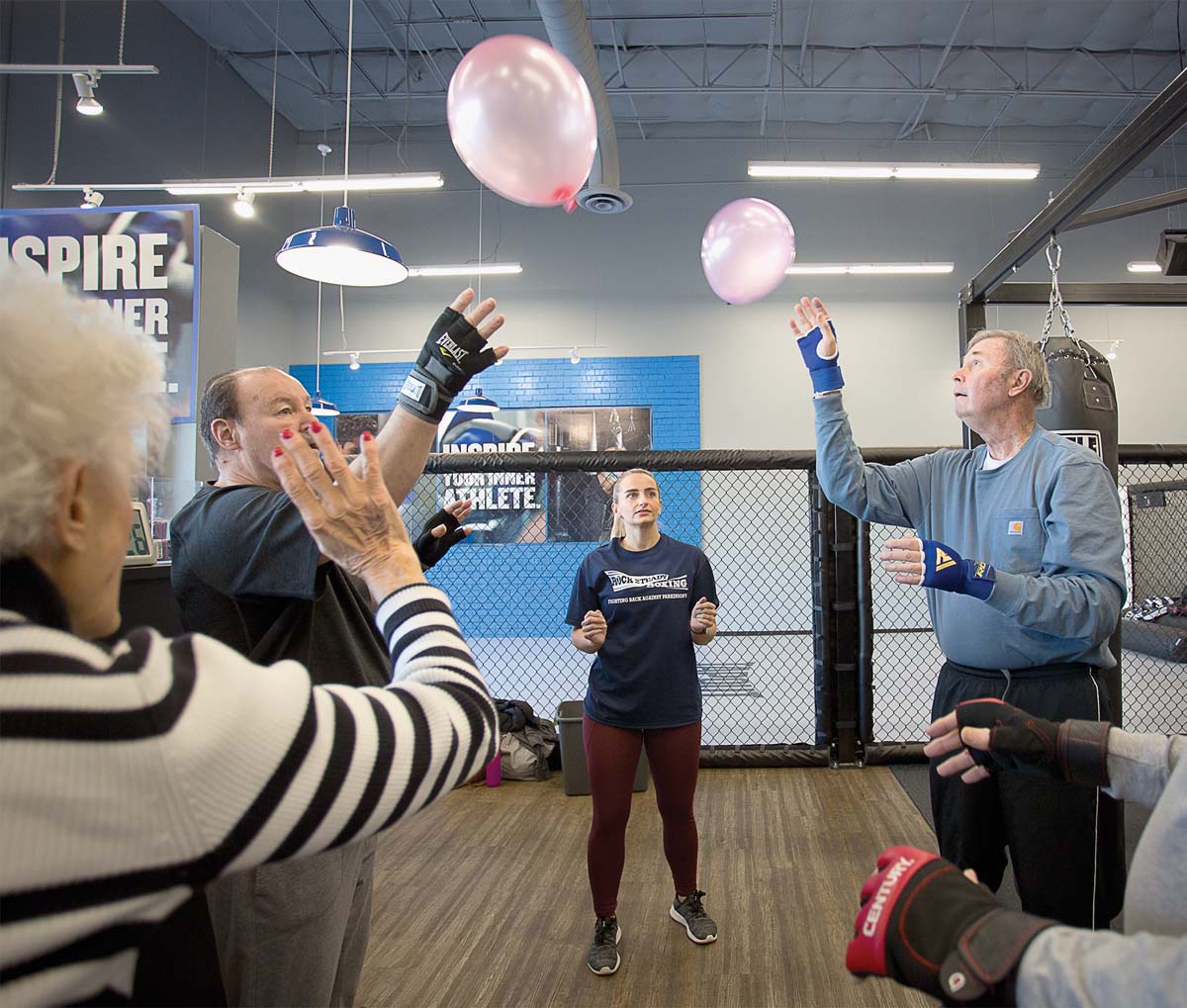 Rock Steady Boxing Southlake Assessments are required before participation and take about an hour. Contact Austen or Mallory Spoonts to make an appointment. Assessments and the first class are free; memberships are $80 a month. Classes are held 10:15-11:30 a.m. Tuesdays and Thursdays. Contact the Spoonts at 830-596-3440; for more information see southlake.rsbaffiliate.com. Tapout Fitness is located at  2717 E. Southlake Blvd.