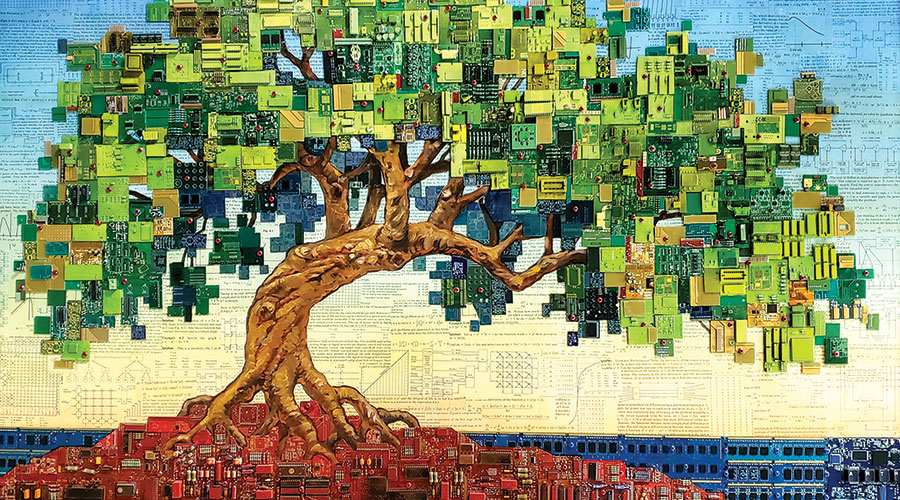 Gregory Arth’s art defies definition, all the better to capture your attention and hold his

If you know the work of Gregory Arth, you might not be sure what to expect the first time you meet the Colleyville-based artist. Will he be the former University of Texas at Arlington student who paints theatrical backdrops and intricate wall murals in homes and businesses? Perhaps he’ll be the pop culturist who meticulously captures the essence of luminaries such as Albert Einstein and Judy Garland in a style he calls “sculptural cubism.” Maybe you’ll find the futuristic dreamer who transforms circuit boards and found hardware into cityscapes, robots and Van Gogh re-creations. 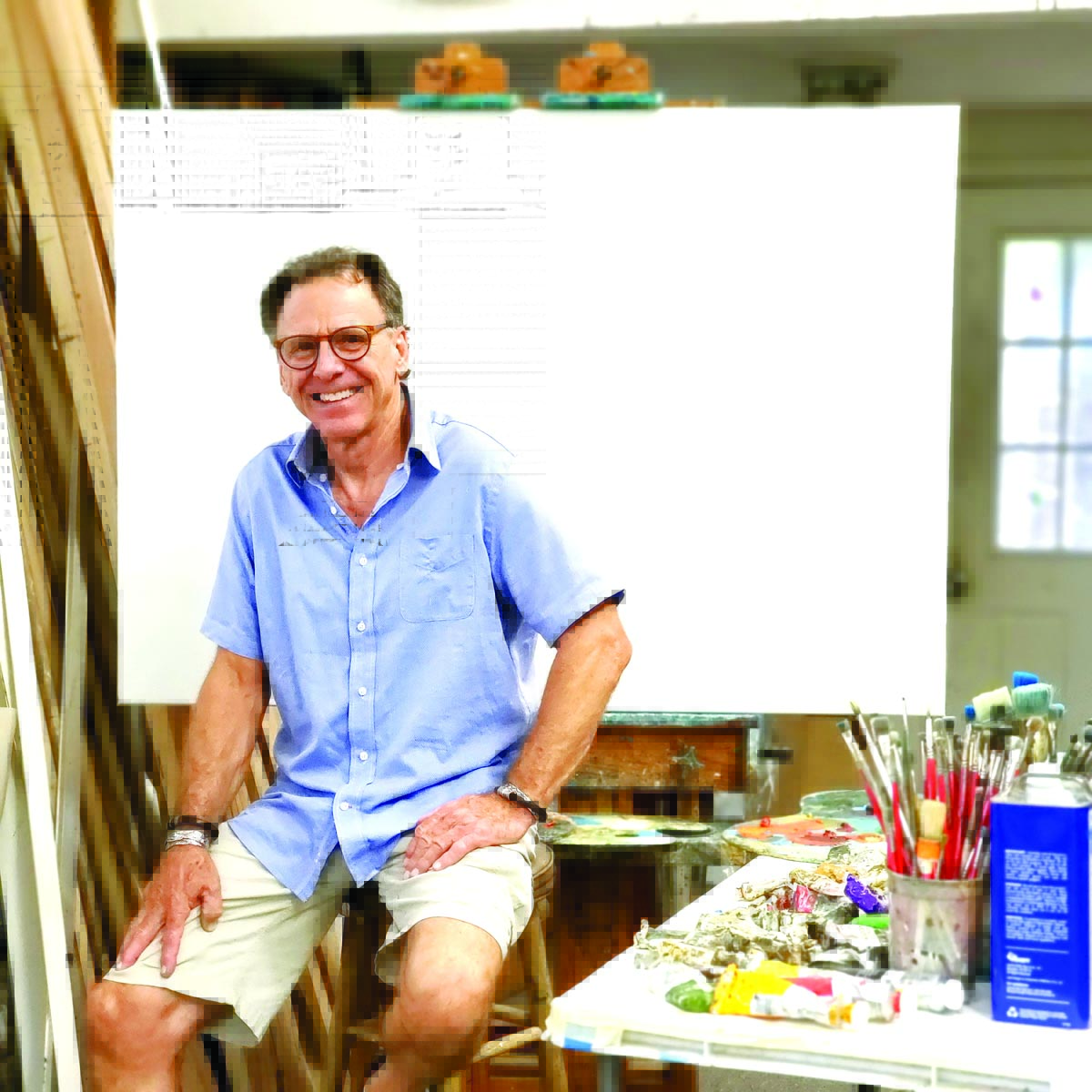 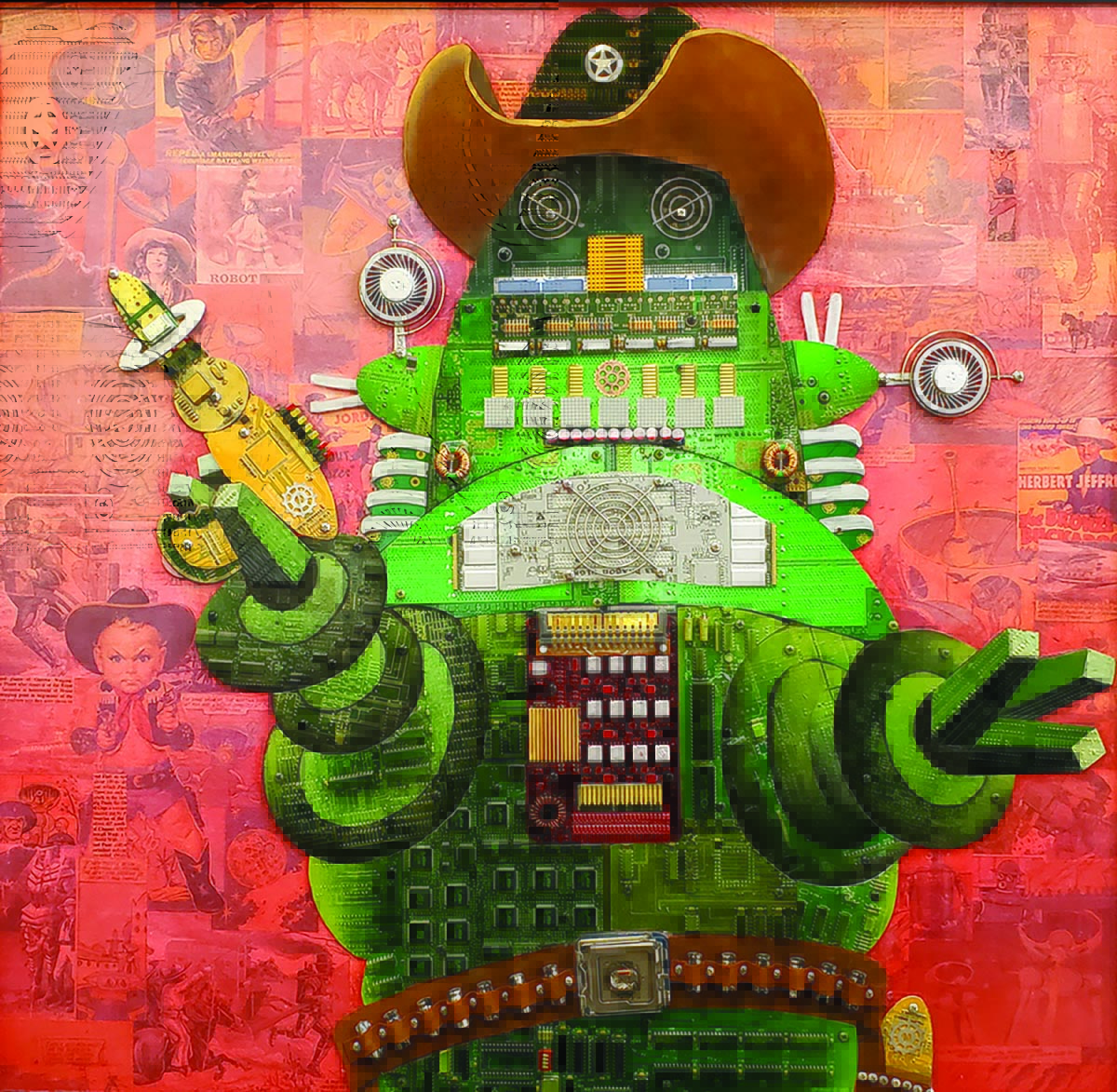 This cowboy-hat-wearing robot is an assemblage of many pieces, including a custom leather belt. For the background, Arth uses pages from an extensive collection of books that he keeps in his studio specifically to incorporate into his art.

But when you walk into the art studio on an idyllic, heavily wooded lot behind Arth’s Colleyville home, you find that the artist with the diverse point of view has a strong, rooted presence — perhaps most closely embodied in his eye-catching “Tree of Knowledge” series of paintings. He’s simply been blessed with a talent that can’t be put in just one box. All he wants to do is create work that fulfills his artistic urges, speaks to the public and, yes, sells.

“I’m the ADD artist,” he says with a wink, before turning serious. “I’ve never been able to stick to just one thing all the time. I have a lot of interests and I want to explore all of them. I used to apologize for having all these different styles. I used to not embrace it. Now I’m of an age that it’s like, this is who I am. Take it or leave it. I’ve got to be happy. I’ve got to have a reason to come out to the studio every day.”

Arth’s interest in art began at a young age, partly inspired by his older brother’s artistic leanings and partly by his own innate muse. He was born in Albuquerque, New Mexico, but his family — parents and five siblings — made their way to Texas when he was a kid. He still has some of his childhood artwork, including a sketch of a nun standing in front of a blackboard that he drew during his Catholic school days. It was there where he got his first dose of competitive inspiration.

“They would hang our work,” Arth recalls, “and I felt like they hung them in order of who was the best. There was a kid in class who I thought was really good in art, and he got hung first. I got hung second. And I got this sort of feeling that I’m never gonna be good enough. I probably still have a little bit of an inferiority complex, which I am perfectly happy with. It drives me. I always think I can do better.”

At UTA, he studied both fine arts and theater and dabbled in acting and poetry writing. Ultimately, he found his voice in the solitary nature of painting and drawing.

In his 20s, mostly to appease his father, who never quite understood his son’s passion for art as a career, Arth got his real-estate brokers license. After two years, he was named top agent and promptly quit. “Had I stuck with it, I’d be rich now,” he says, laughing. “But would I be happy?”

He directed his energies to finding ways to do art and still make a living, utilizing his theater arts background to get a gig painting backdrops and sets for the Crazy Horse Saloon and Southern Palace Theatre at Six Flags Over Texas. He did window displays for Tom Thumb Page, murals for Cinemark, decorative designs in private homes. “Name anything even peripherally related to art and I did it,” he says. 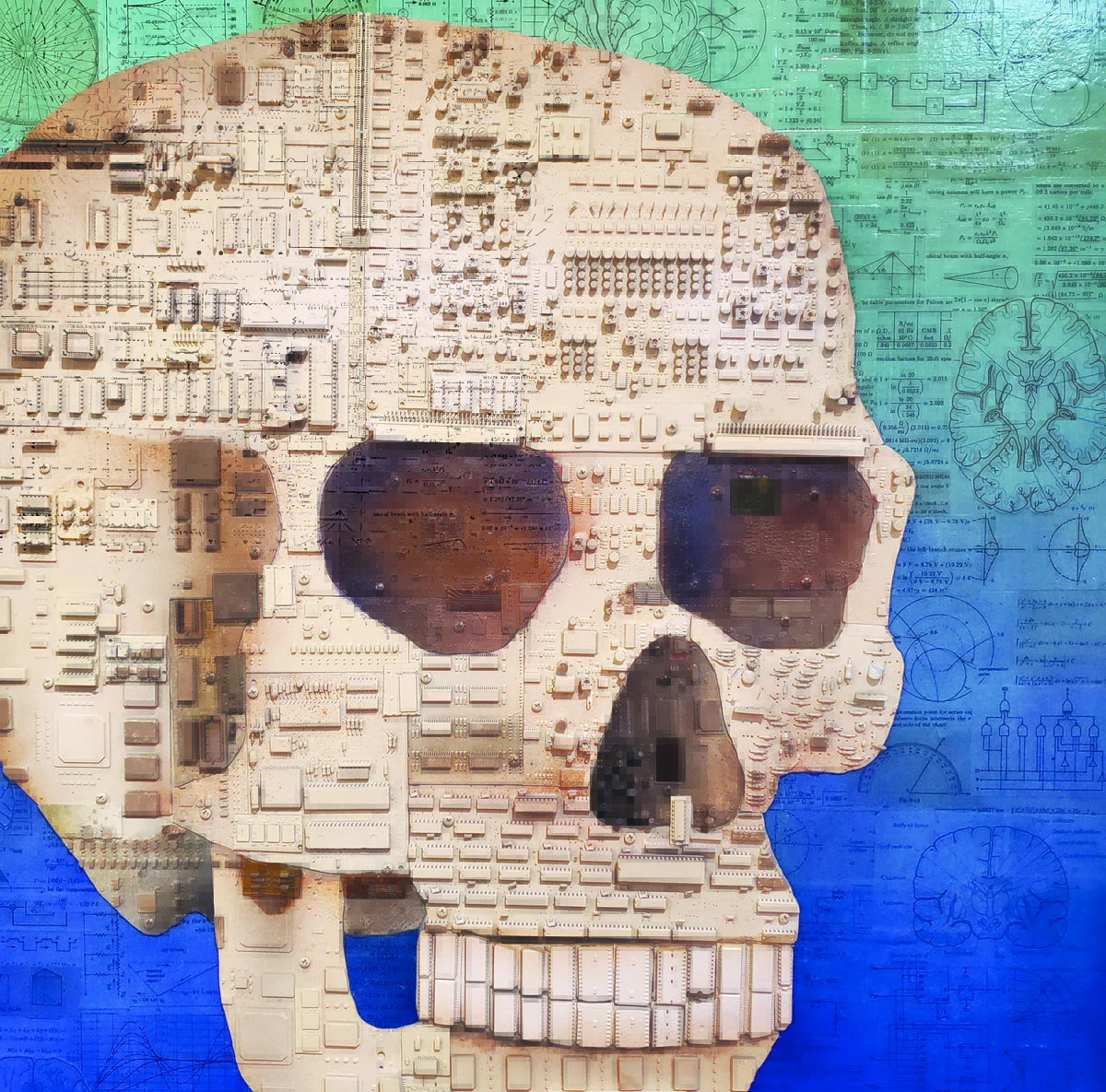 This skull collage is part of Arth’s personal collection and hangs in his Colleyville home. 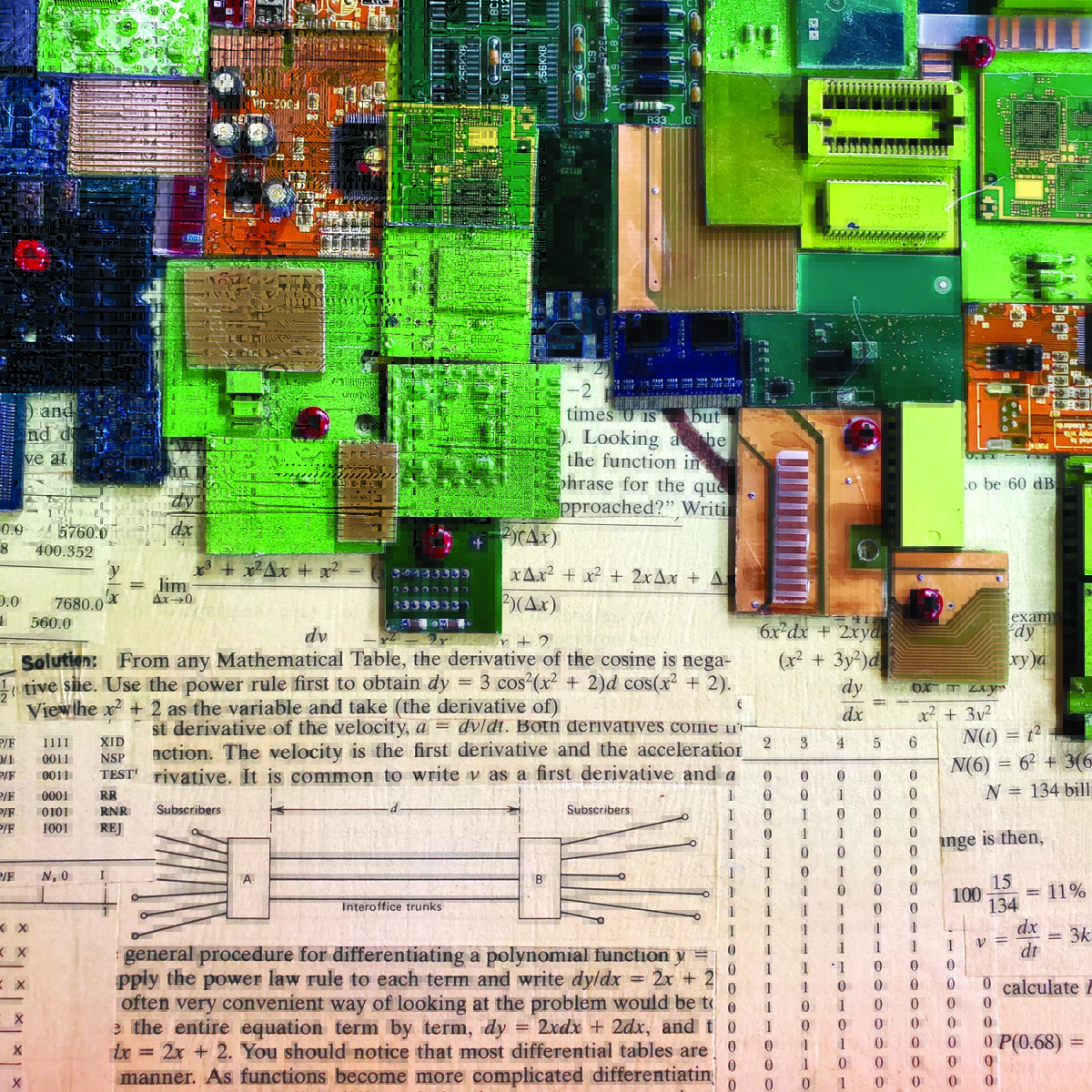 In 1989, he picked up a piece of circuit board and pondered its resemblance to an aerial view of a city, launching what has become his most popular series. He began hanging his circuit board pieces in a restaurant. “I noticed people were just lined up looking at that circuit board and I was like, ‘Huh, well that’s something.’ ”

Gallery exhibitions and fine arts shows soon followed. Before the pandemic shut things down, Arth was showing his work at 16 to 18 shows a year. Now, having shown only once in the last 18 months, he looks forward to returning to Southlake’s Art in the Square (see sidebar) as the People’s Choice artist for 2021. With two other shows also scheduled for September, he is cautiously optimistic as his art-show dance card slowly fills in.

“I’ve been at this for 40 years,” he says. “I try to create art that is not only interesting and fun, but sells. In the art world, they would say if you’re selling, you’re selling out. But if you want to do this for a living, you’ve got to sell something.” During the height of the pandemic, commissions kept the boat afloat. He found refuge from the outside noise of political division and social unrest in his Colleyville sanctuary. He could isolate with Claudia, his wife of 35 years, swim and chill with family and friends, and concentrate on studio work.

At a fit and energetic 65, Arth has clearly found the right work-life balance for himself. Sitting back in his secluded retreat, he counts his blessings. “I’m happiest out here creating,” he says. “We’ve got a good life. We remind ourselves all the time how lucky we are. We live in a safe space. I get to do what I want. I’m my own boss. It doesn’t get much better than that.”

Gregory Arth The freshly inspired People’s Choice artist of 2021 returns this year to Art in the Square: 21 Years, Take 2! Look for him at booth M9 near Starbucks. See more of his ever-evolving work at gregoryarth.com.

In the “art treks” she conducts across the United States and Europe, Dallas studio artist Gulley creates colorful, impressionistic takes on landscapes.
Find her in booth SN2. nikigulley.com 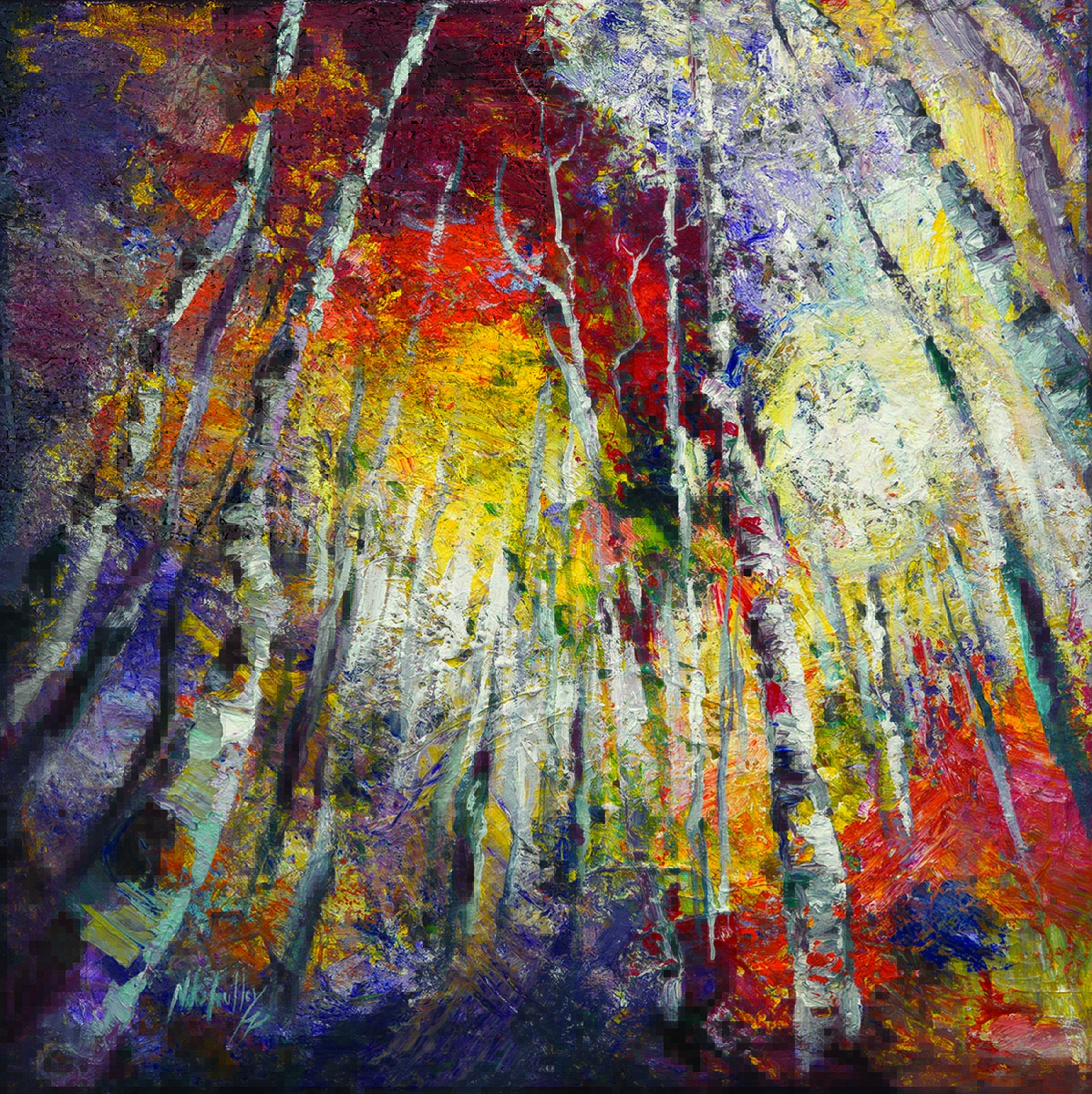 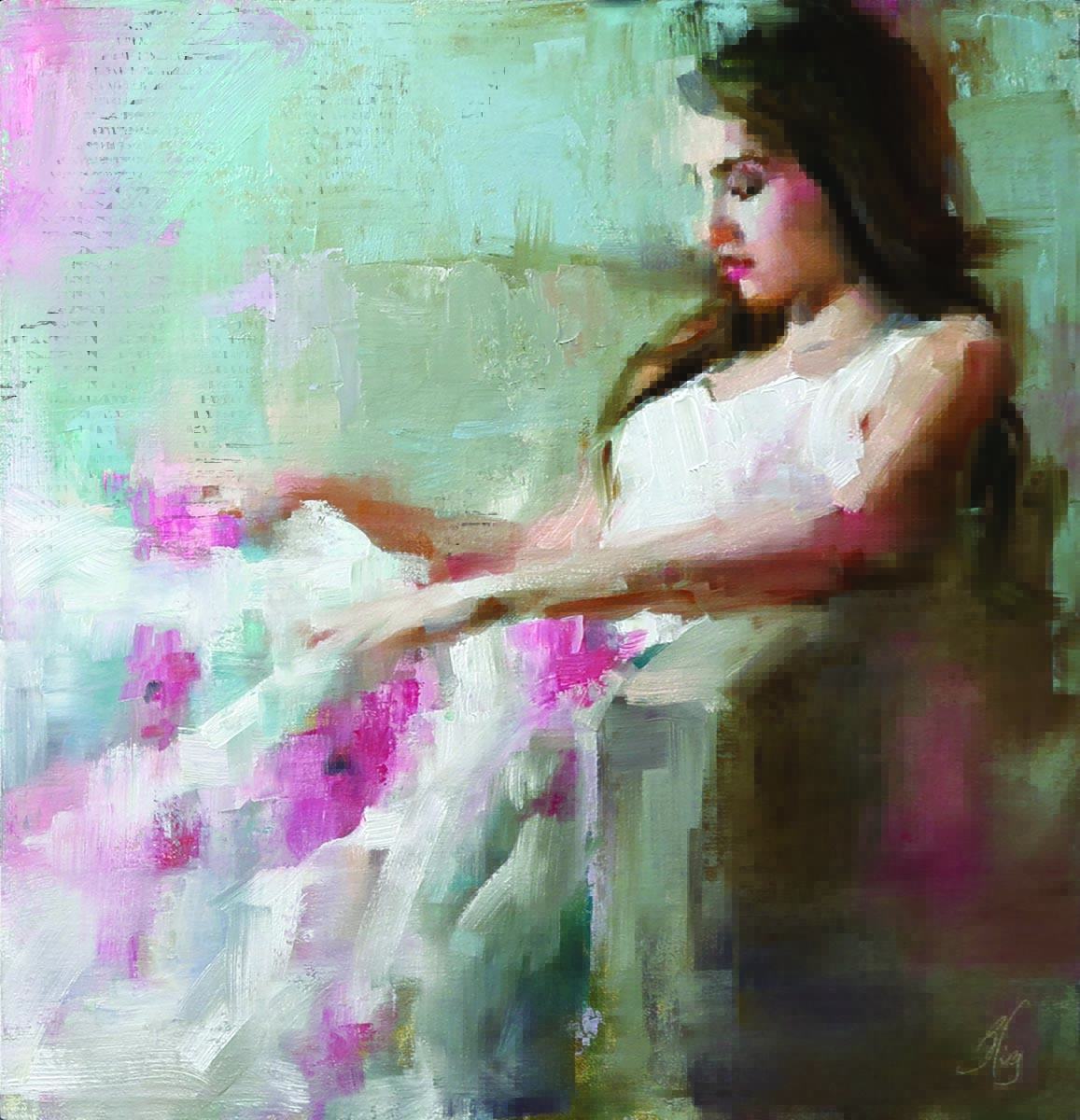 Another Colleyville-based artist, Blaies paints with the alla prima (wet-on-wet) technique for her dreamy oils, meaning each piece is finished in one session while the paint is still wet. Meet her in booth PN12. pamelablaies.com

A master photographer based in Southlake, Hamel travels extensively to capture his painterly images. He prints on metal for extra pop. See him in booth PN4. jimhamelphotography.com 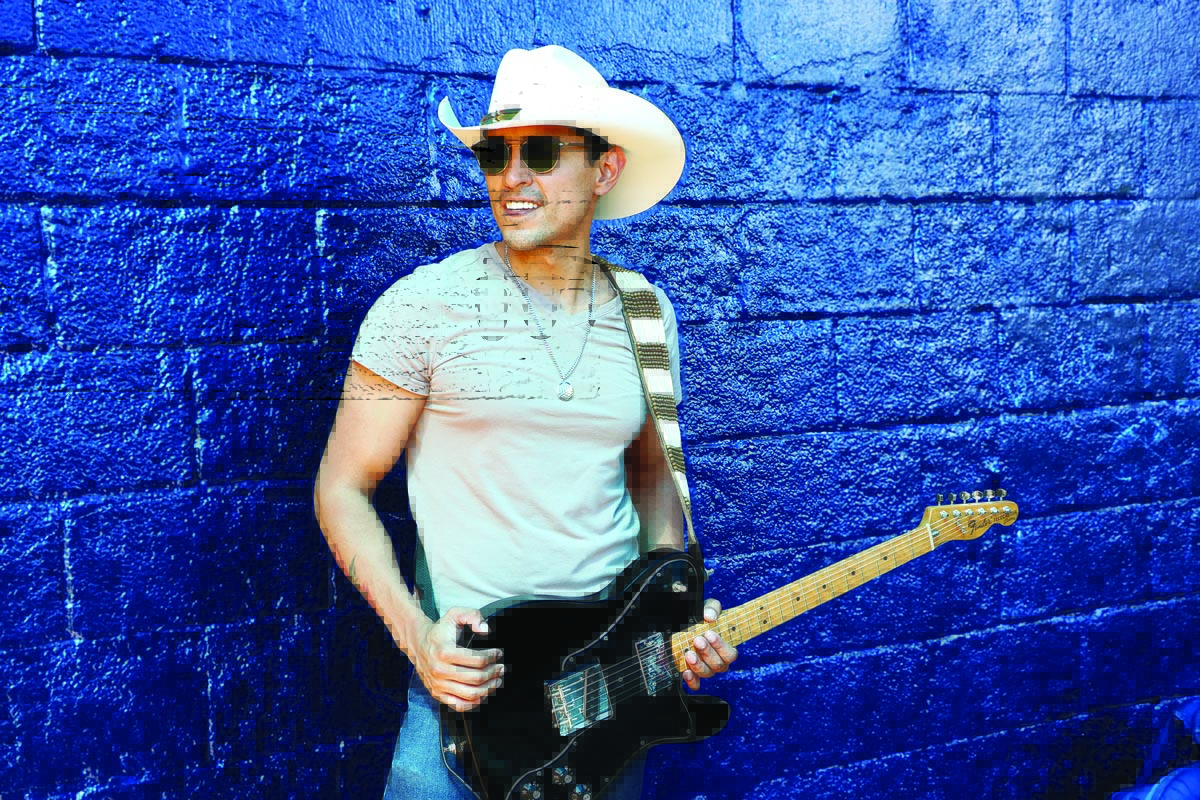 After a year-and-a-half delay, the fine arts show, which was scuttled by the pandemic, takes its 21st bow in Town Square. This year’s celebrations, tagged Art in the Square: 21 Years, Take 2!, return with everything longtime fans have come to expect: one-of-a-kind art, live music, kids activities and tasty food and drink. More than 100 artists, renowned for their recognition in juried shows worldwide, exhibit work in a variety of media including glass, textiles and ceramics as well as paintings. Two stages host live entertainment throughout the festival; look for crowd favorite George Navarro, below, named 2020 Fiddler of the Year by the Texas Country Music Association, to take the main stage as headliner on Sept. 25. Children can get hands-on crafts time at Cook Children’s Kids Korner or work off some energy at the new EVO Entertainment Zone, where they can bounce, climb and slide. Expect a variety of festival food, from pizza and barbecue to funnel cakes, to be on offer at on-site tents and food trucks. Proceeds from the Southlake Women’s Club event benefit more than 20 Northeast Tarrant County nonprofits. For times, schedules and more information, visit the website. artinthesquare.com