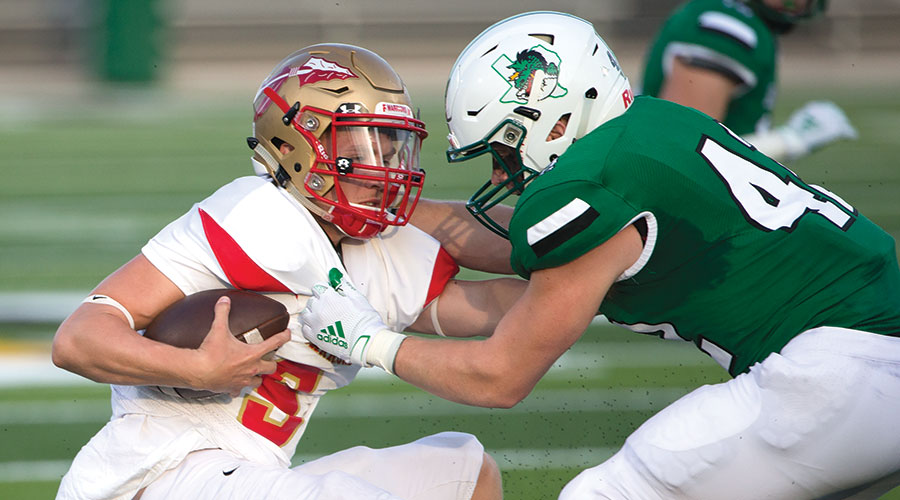 By Carlos Mendez
Photos by Jeremy Enlow. Above photo by Ron Jenkins.

Like many high school students whose days (and evenings) are packed with athletics or band or choir or debate or cheerleading or theater or robotics or Key Club, Avyonne Jones doesn’t have a lot of extra time.

Can he find a half-hour? It might affect a game.

The Carroll Dragons cornerback, like his teammates and peers across the state, watches as much film as possible of the opponent. Finding tendencies and habits can make for a more prepared player.

For a team as inexperienced as the Dragons are heading into 2020 — no returning starters on defense, just three on offense — any edge is worth finding. 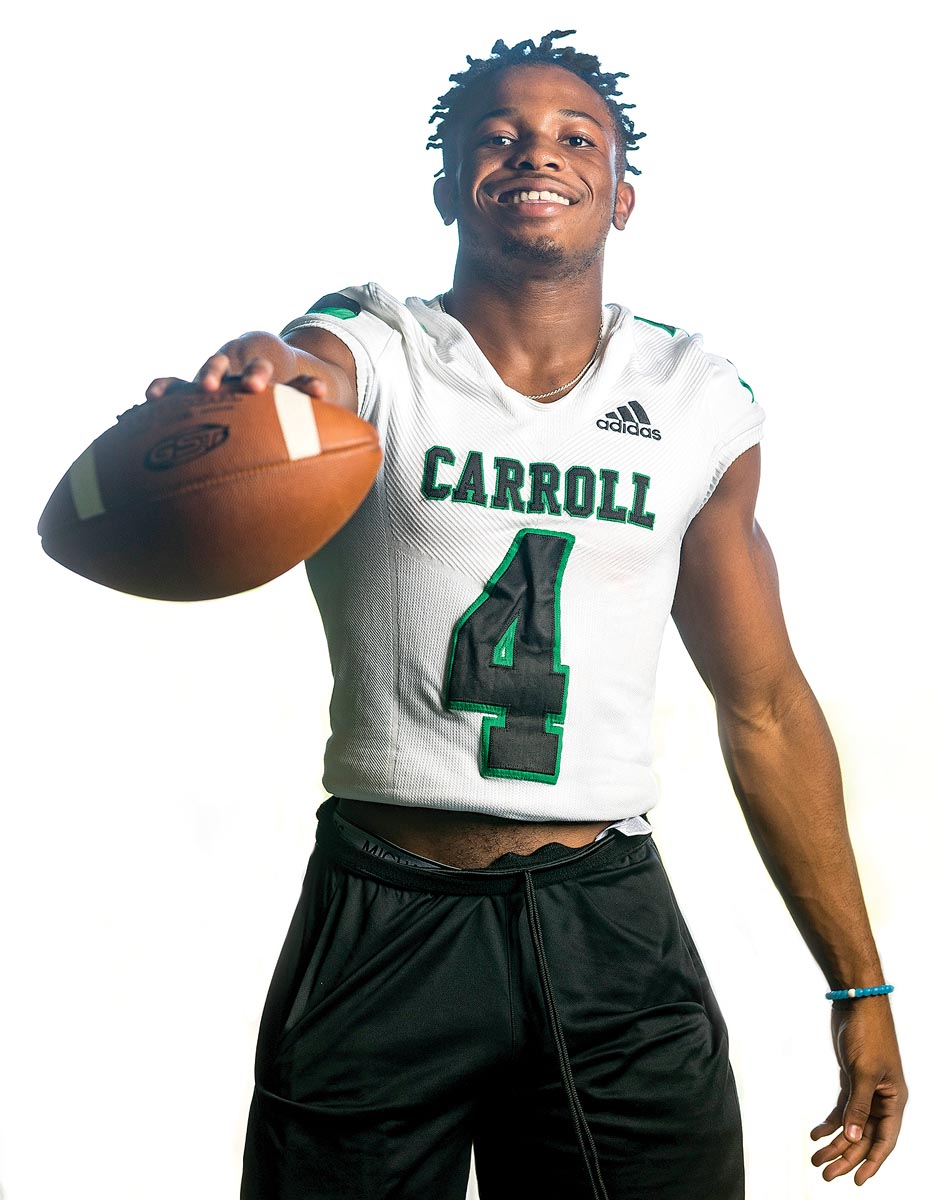 Look for senior Cinqe Williams to be an impact player on the Dragons’ defense. 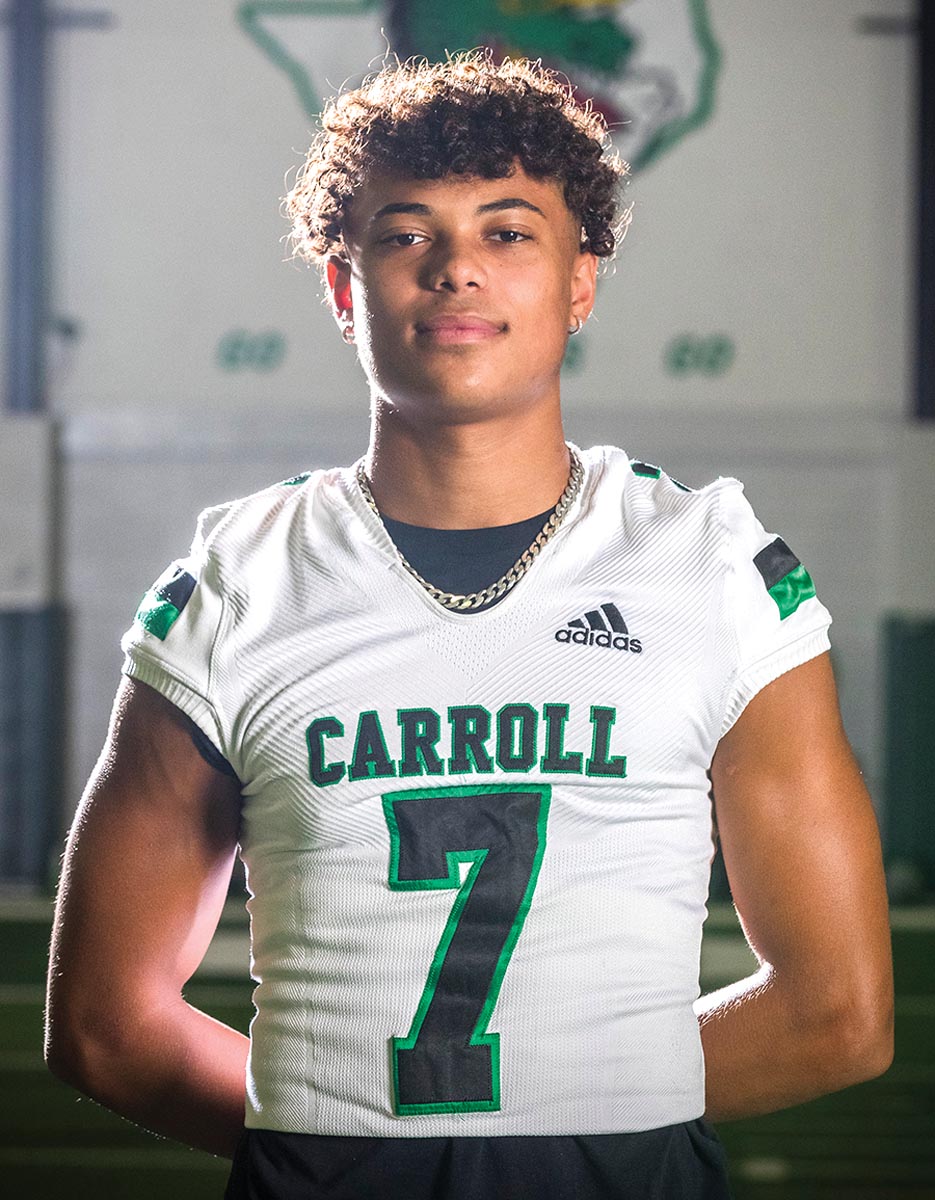 Reducing the learning curve has taken on added importance for Carroll in its nine-game schedule, which begins Oct. 2 against Rockwall-Heath High School.

“We try to structure our schedule throughout the week to try to get as much film study as we can with the kids,” says defensive coordinator Lee Munn. “Really, it comes down to any spare time they have, which is not a lot. We’ve got a lot of kids in AP classes; they have homework to deal with. Just trying to get them 30 minutes a day, any extra amount of time they can commit, is going to help them.” The reward can be quite tangible.

“There’s nothing better than when you go out on the field, and you’ve put in that time sitting in the film room, and you’ve seen this play 100 times and as soon as you see it, you know what’s going to happen,” Jones says. “You can just react.”

By all accounts, the Dragons are already there. Fast to the ball at all three levels, they are counting on speed and athleticism as much as any year. Receiver Brady Boyd describes the defensive lineup in two words: “Very fast.” And he should know, as he takes multiple reps in practice against them.

With that extra half-hour, who knows how much quicker the Dragon defenders can get.

“You can’t win games if you have to hesitate before everything you do,” says Jones, a junior who holds an offer from Rutgers. “You have to know everything, so it’s just muscle memory.”

Look for Jones to react fast as a starting cornerback, paired with Cinque Williams, to form a strength of the defense. 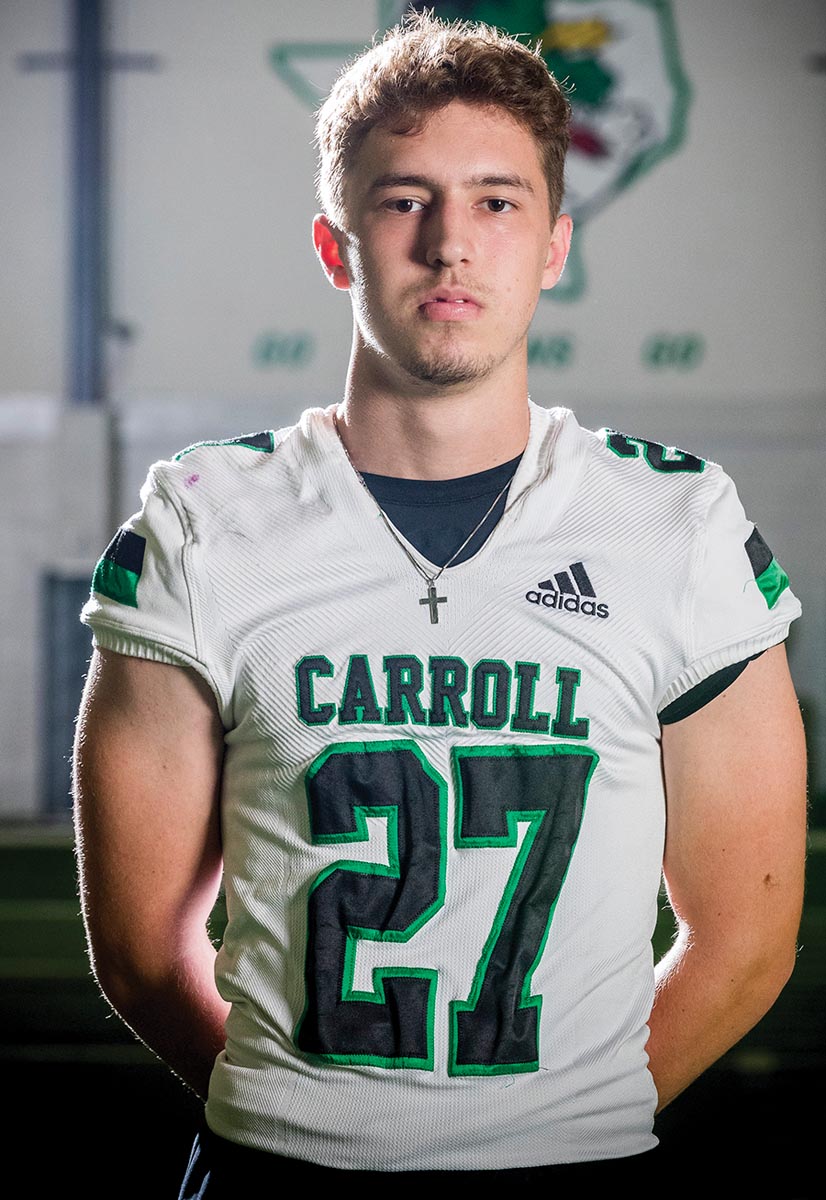 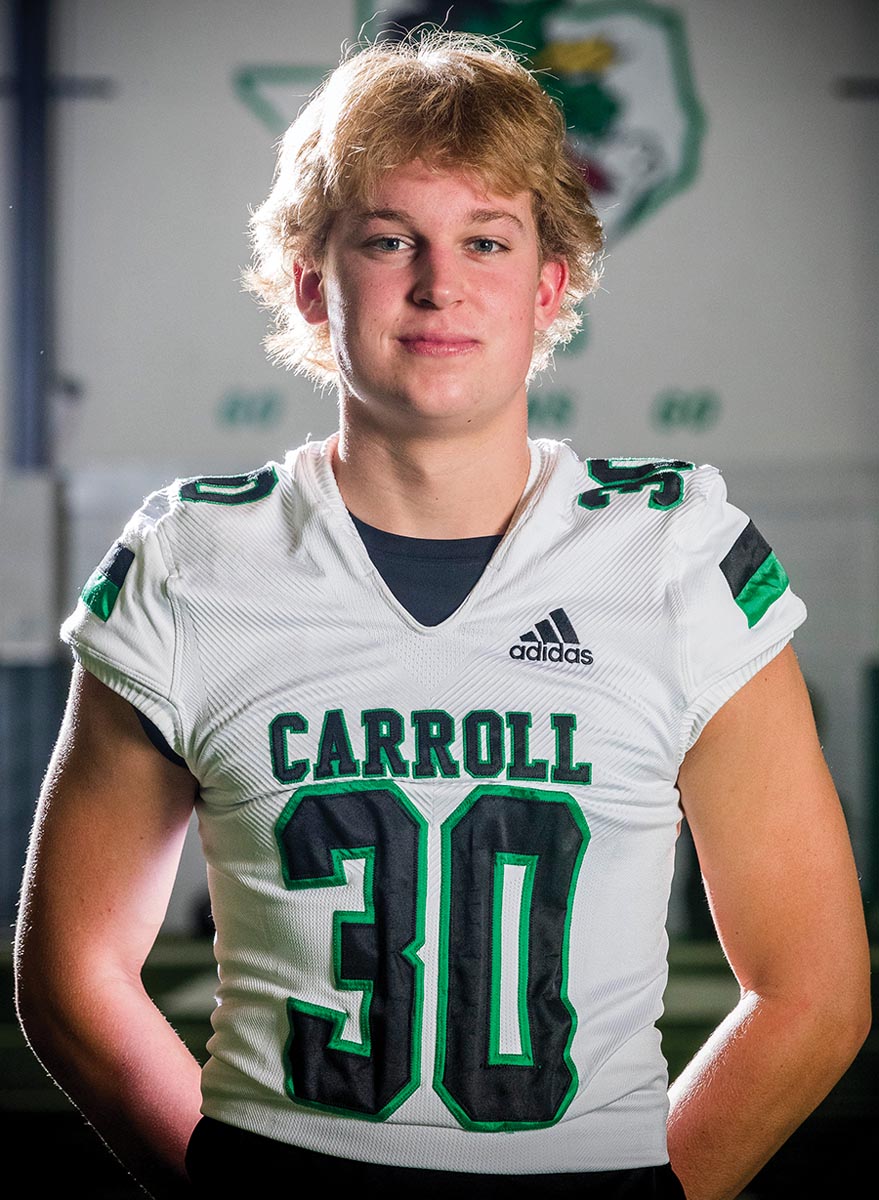 “The backups are really good, too,” Munn says. “That’s going to be big for us on the outside, just being able to man people up.”

Nate Gall played as a quick, havoc-causing defensive lineman as a sophomore. He’s taking his agility to linebacker, so his
30 minutes are put to as much use as possible.

“It was quite a learning process, honestly,” he says of the transition. “Lots of film. Lots of watching, because we’ve always got to set the front, know what they’re doing and also know what the back end is doing behind us so we can help them out, too.”

Linebacker is an area where the Dragons have plentiful options.

“We’re pretty deep,” Munn says. “Two seniors, two juniors. All four can really play.”
Travis Keener, a junior, is in line to play the “Jack” position, a linebacker/end hybrid who can play where he’s needed, from pass coverage to rushing the passer to holding the edge in run defense.

“We have some sophomores that are going to splash for us including Cade Parks, who plays the same position as Keener.”

In the secondary, Jon Cox has the inside track to a job at free safety, even as a sophomore.

“Logan Anderson is another talented DB,” Munn says. “We have four sophomores, and all four have a chance to start. 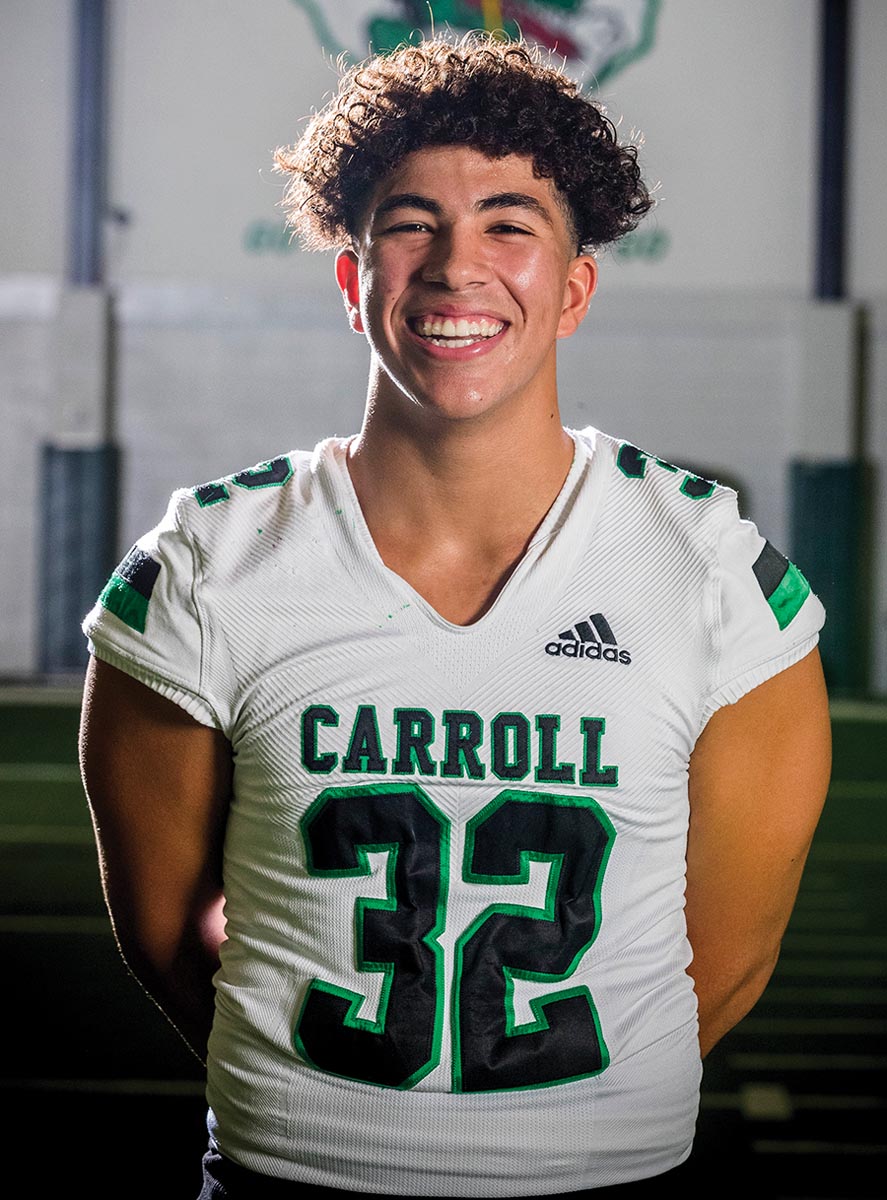 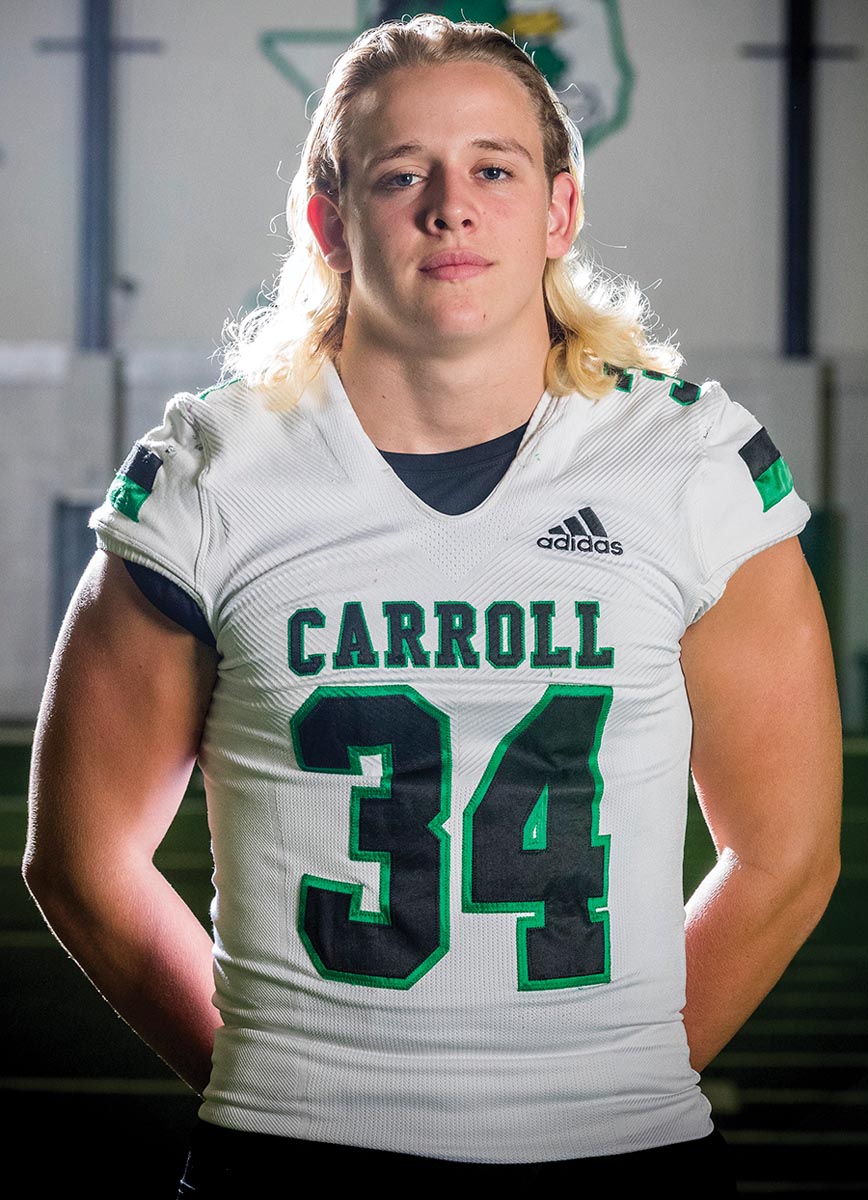 Munn is a veteran coach, beginning his third year at Southlake after coming from Austin Westlake. Yet he has never had to replace an entire lineup.

“It’s a unique situation, but it’s also a challenge that we are kind of looking forward to, my staff and the kids,” he says. “We know what the expectation is, what the standard is, and that’s not going to change just because we graduated all 11.”

What will get a player on the field? Munn looks for effort, knowledge of assignment and team-first mentality, in addition to skill. Ideally, all are equal.

“It’s just a matter of figuring out who on a Friday night is going to step up and make those plays.”

They’re out there to be made. Just watch the film.