Press enter to begin your search
FeaturesLife StyleThe Give Back 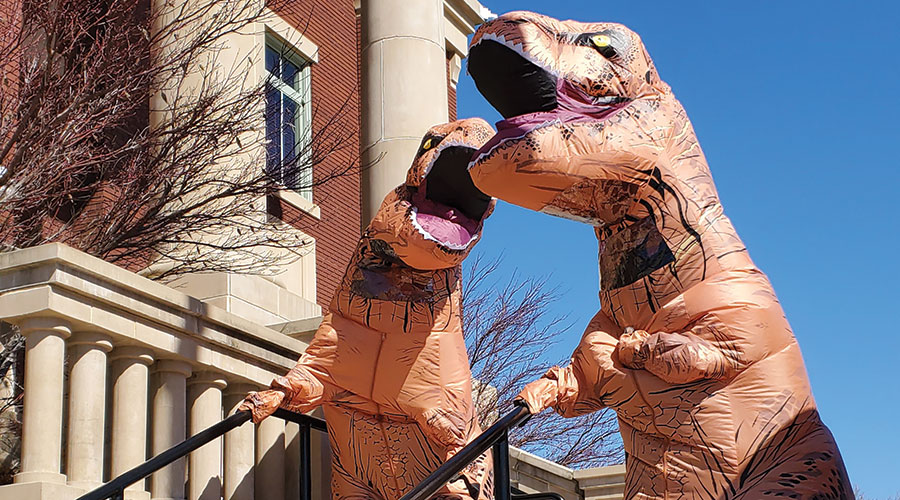 Story and photos by Meda Kessler

Apparently, dinosaurs still roam the Earth, and their names are Millie and Harriet.

And while they don’t fear attacks from a fellow Tyrannosaurus rex or the random asteroid, they’re cautious about going down steep stairs. It’s hard to hang on to the handrails with stubby appendages. Heat, too, can be brutal, and they work up a pretty good sweat inside that plastic “skin.” 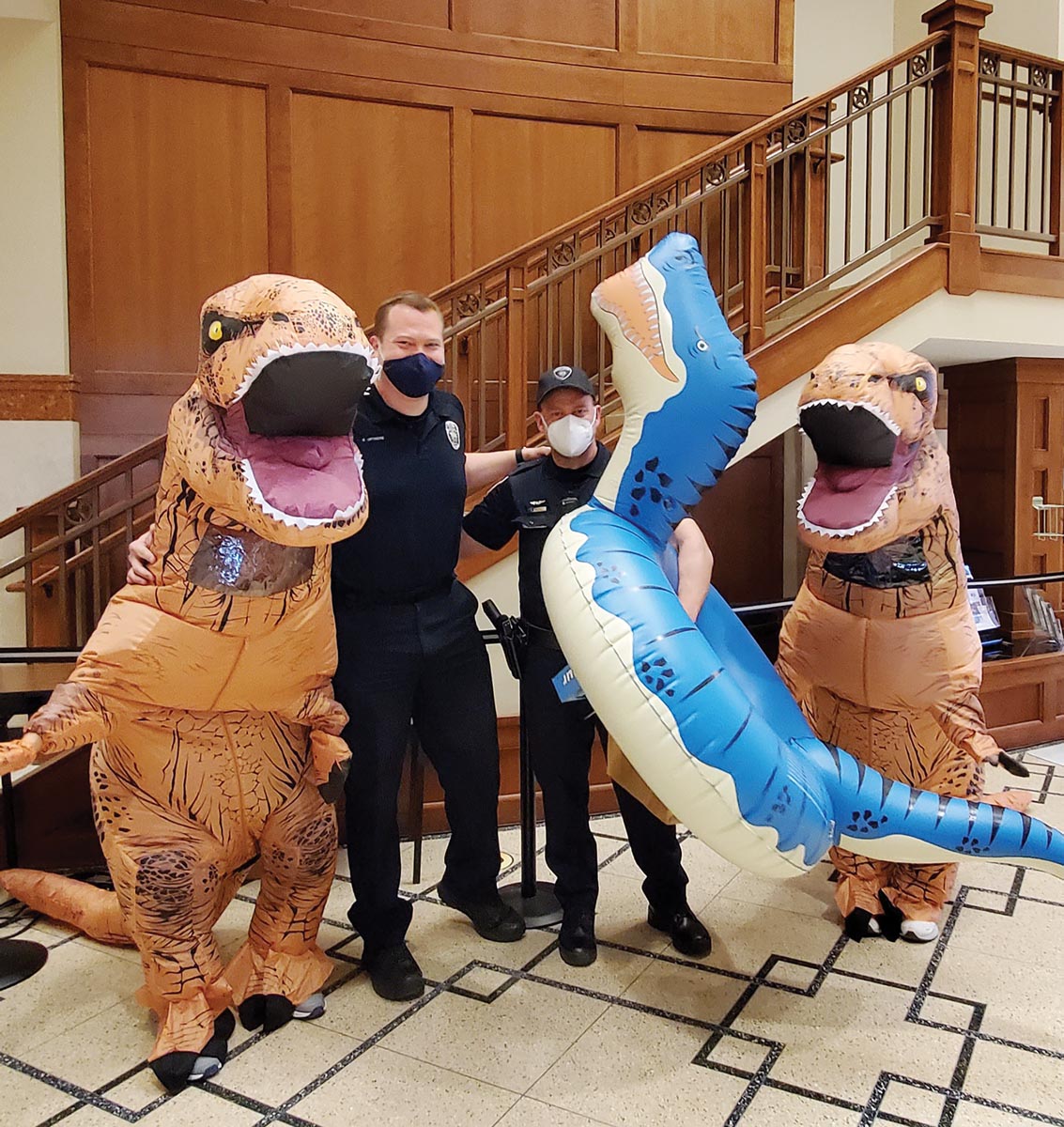 Public information officer Brad Uptmore and Sgt. Gaylon Music enjoy their moment with the lady dinos. The blow-up float is a reminder from Millie and Harriet that a pool accessory does comes in handy in a water rescue. Uptmore was gifted with an honorary Dino Deeds award for “most creative and informative writing in a police department” for his witty social media posts. 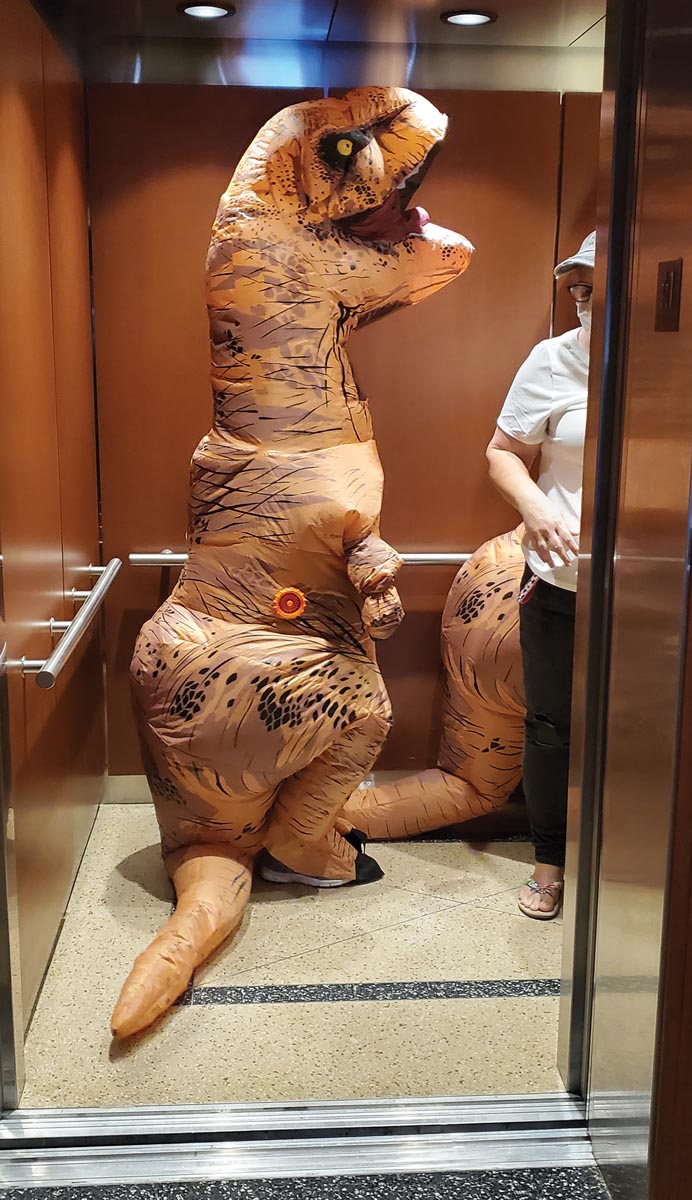 The dinosaur tail can be a liability; one must make sure it doesn’t get caught in a door of the getaway vehicle or an elevator.

We first met the Dino Deeds team — their wrangler’s name is Betty — in the parking lot of the Southlake Police Department. We’re immediately sworn to secrecy about Millie’s and Harriet’s true identities as they exit Betty’s SUV wearing only the bottom half of their costumes. Working quickly to avoid anyone seeing them “undressed,” they immediately pull up the top half of their T. rex costumes and hit the built-in button to inflate them. Wrangler Betty grabs the gifts for the honoree, her tote bag and then they’re off to the police department.

Dino Deeds’ mission is to acknowledge everyday heroes for their good deeds. On this day, they’re surprising a Southlake police officer with tokens of appreciation for helping save a dog during February’s winter storm. Shadow, a black Lab, had fallen into a frozen pond and was clinging to thin ice to stay afloat. With minimal equipment available, Sgt. Gaylon Music led the rescue by breaking up ice as he headed chest-deep into the water toward the dog. He used a pool float procured by Shadow’s owner to buoy the dog; fellow officers pulled them both back to shore via a long rope.

Millie and Harriet, intent on their mission, lumber into the elevator of police headquarters. Wrangler Betty hits the up button and they step out into the lobby to introduce themselves to a woman behind a clear screen. She seems to take it all in stride, as does a UPS delivery driver who barely glances at the dinos as he drops off packages. Millie and Harriet have hot cocoa bombs and other goodies — including a dinosaur-shaped pool float — for Music, who gamely poses for photographs and offers his thanks.

We opt to take the stairs down to the parking lot, and Millie and Harriet joke about whether they would bounce if they fell. Once back at the car, they deflate and carefully pull off their costumes, wiping the sweat from their faces. It’s just another day in the life of the Dino Deeds team. 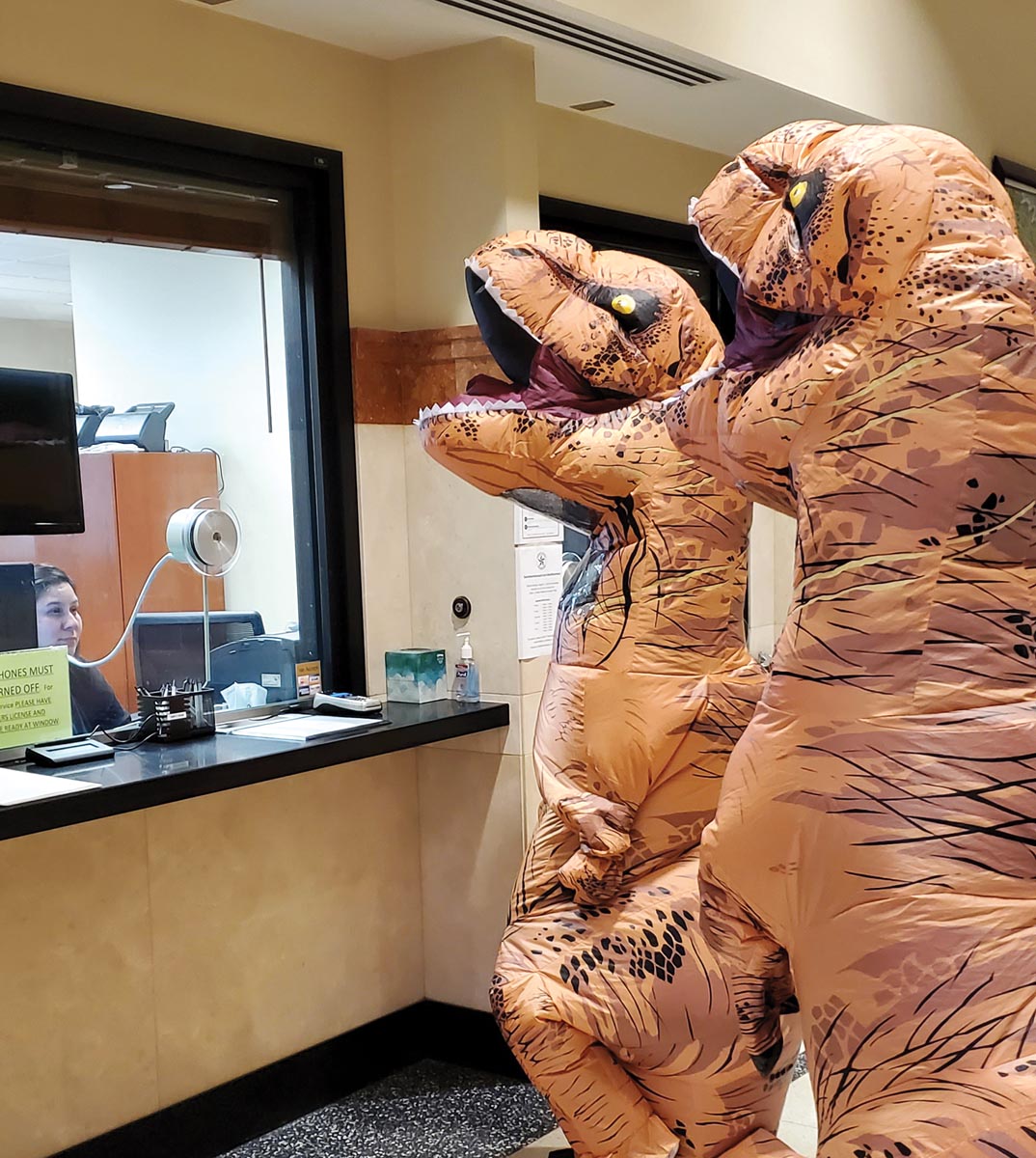 Millie and Harriet announce their arrival at the Southlake Police Department. 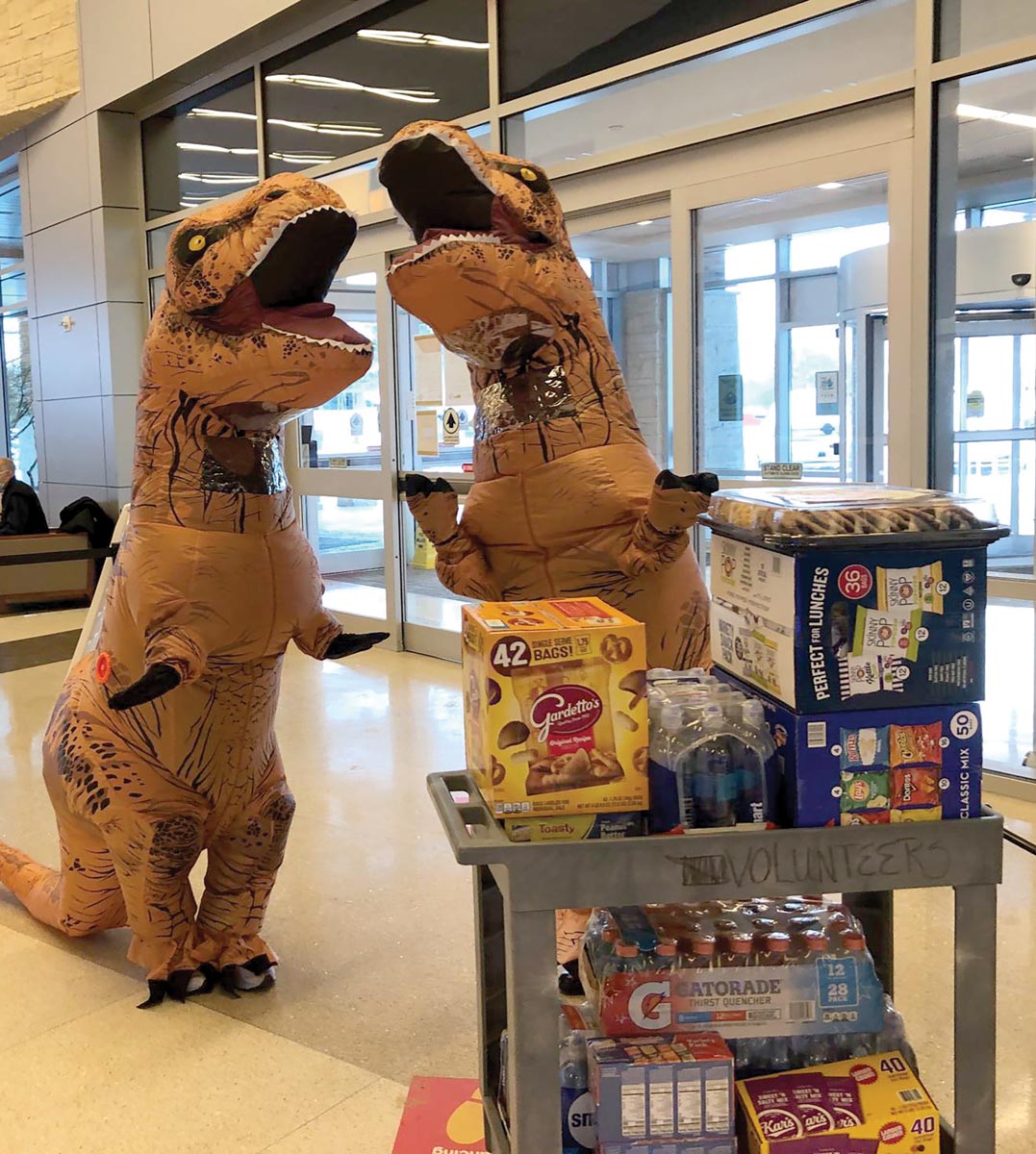 Millie and Betty roll in a cart of snacks and drinks for the health care heroes at Baylor Scott & White Medical Center in Grapevine.

Millie and Harriet have been intrigued and amused by the dinosaur costumes for years. During the pandemic, the two friends came up with the idea of Dino Deeds to support locals who are making a difference in the community, including first responders. They bought the costumes online, and Wrangler Betty joined them to help with logistics and to be the driver (she typically wears a hat, sunglasses and a mask). Their first day on the job was Jan. 29, with the intention of making once-a-month visits. That schedule has ramped up considerably. And Dino Deeds, for now, is completely self-funded, with occasional donations of treats from local businesses such as Cookies by Lori, Legacy Cakes and Sweet Spot Donuts, all in Grapevine.

They’ve visited restaurants, hotels and other small businesses, along with the Colleyville police and fire departments, the Humane Society of North Texas in Fort Worth and Baylor hospital in Grapevine. In Trophy Club, they honored some city workers who worked tirelessly during the snowstorm.

Although T. rexes were among the fiercest of dinosaurs, Millie and Harriet want to project a different image. “We came up with what we call ‘little old lady’ names, which also helps keep us in character,” says Harriet. They’re currently thinking of ways to distinguish one from the other, as it has been tricky to find accessories that fit.

Millie says they’ve worked hard to maintain anonymity, but they’ve had to tell some neighbors who spotted them in their dino costumes. “They’ve all been sworn to secrecy,” she acknowledges. 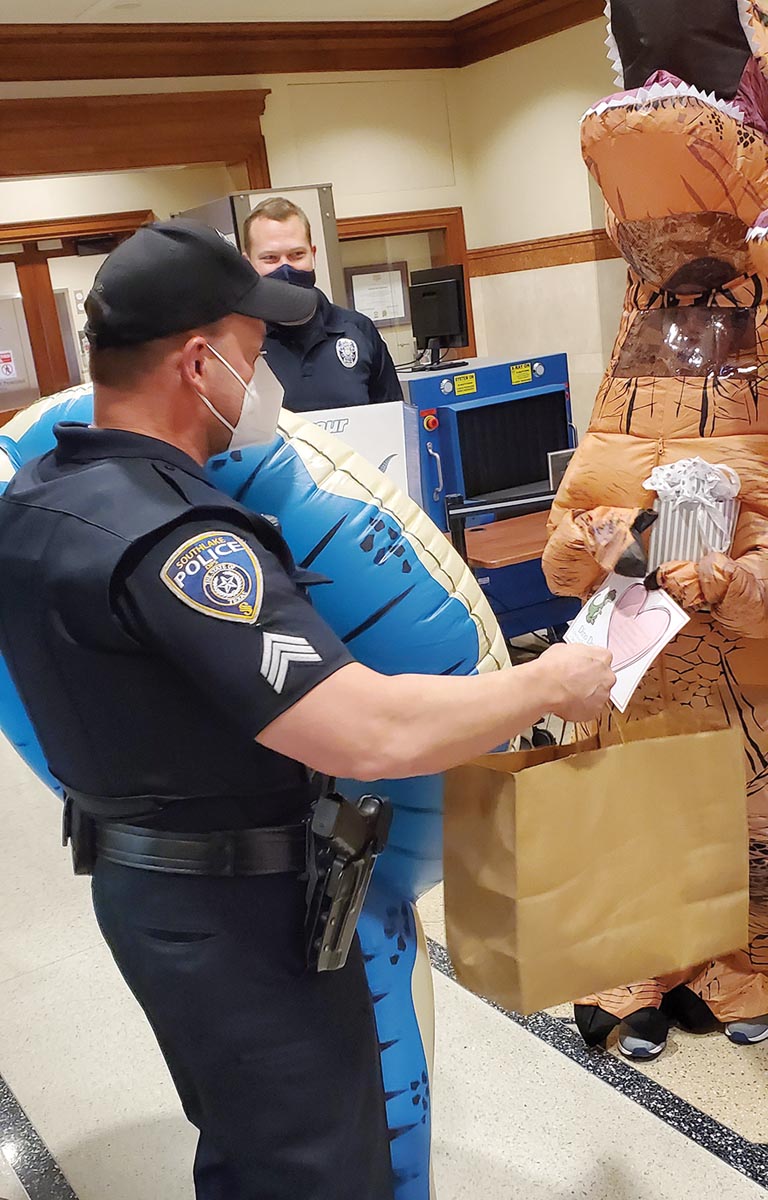 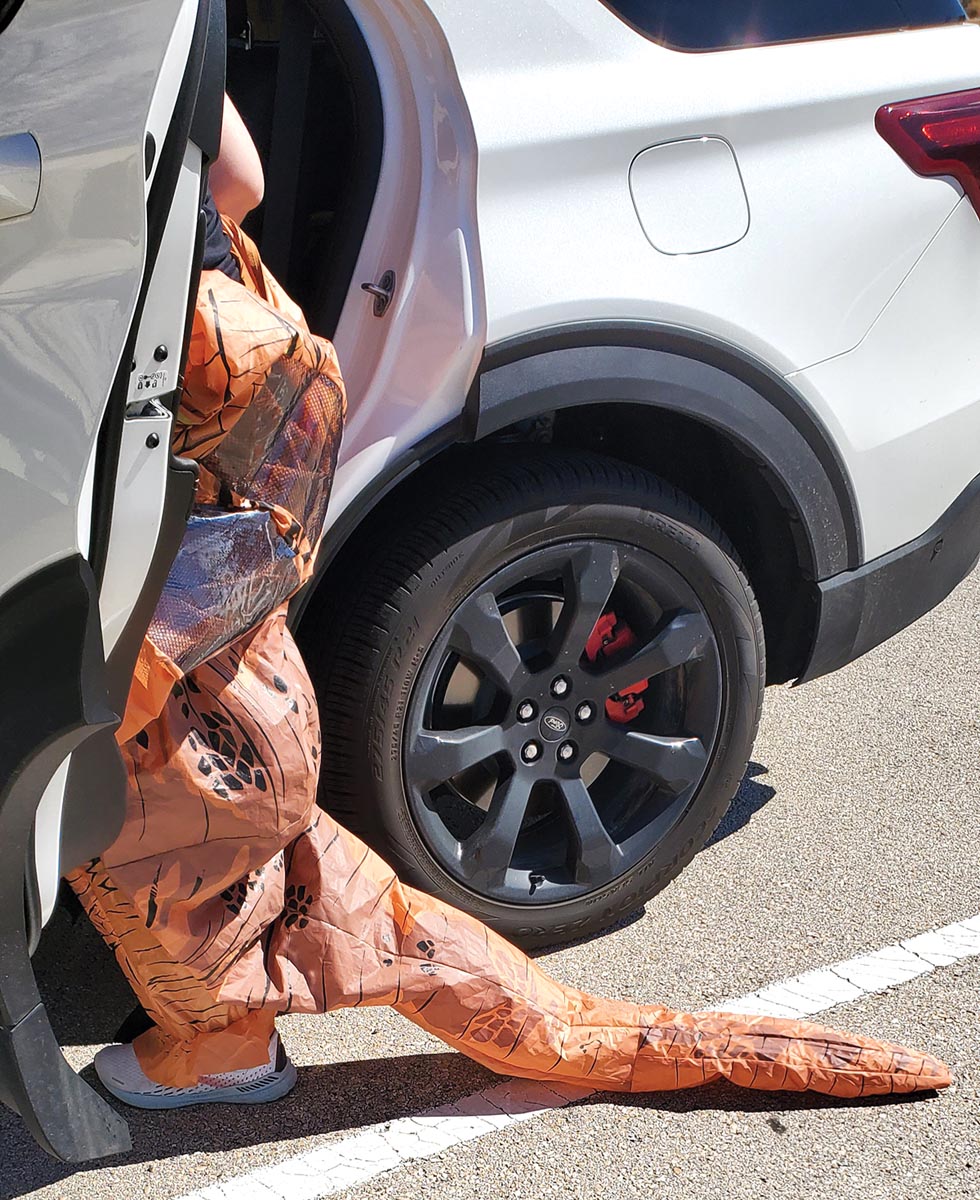 Dino sightings tend to draw a crowd when the three are on the job. “We were at Colleyville City Hall to make a Dino Deeds presentation and adults of all ages wanted their photos made with Millie and Harriet,” says Wrangler Betty. “It was the same at a hospital. Doctors, patients and kids all seem to have a fascination for people in dinosaur suits.”

“The Colleyville firefighters really got into it,” says Millie. “They were thrilled to get snacks, and they had a lot of fun during the photo sessions. They say it made their day but, honestly, it made ours, too.”

“Each of us has a servant’s heart,” says Wrangler Betty. “We also hope to inspire others to do good deeds.”

Dino Deeds The trio looks for worthy recipients via the news, social media and friends. They also accept nominations; email them to dinodeedsdfw@gmail.com. Follow their adventures via facebook.com/Dino-Deeds-103244065123303 and instagram.com/Dino_Deeds.