Press enter to begin your search
FeaturesThe Give Back 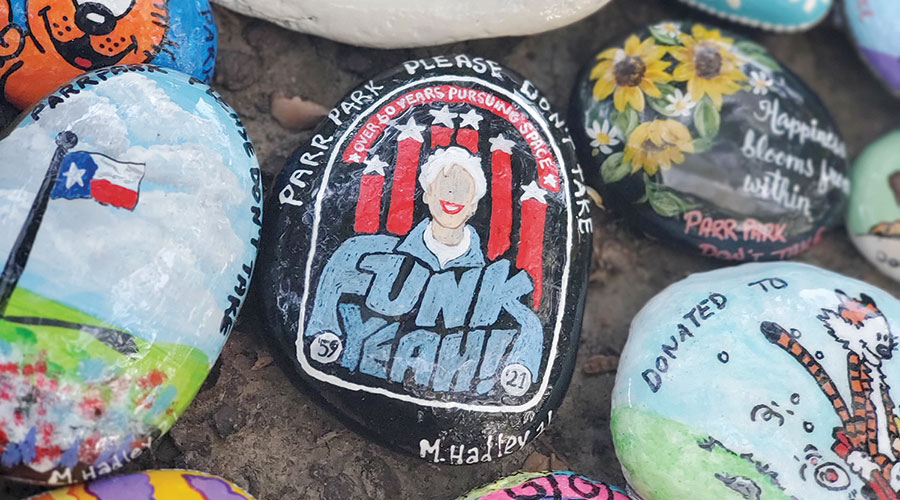 Story and photos by Meda Kessler

A simple gesture intended to make people smile during the pandemic has turned into something much bigger, figuratively and literally.

Ask Ron Olsen and Chris Penny, who both live near Grapevine’s Parr Park. Olsen, an avid runner, saw a marked increase of people on the park trails during the shutdown, when families isolated at home began looking for ways to enjoy the outdoors. That was when he and his grown children began painting rocks and placing them on the edge of one of the nature trails. After others began doing the same thing, Grapevine’s parks department eventually installed official signage for the Rock Art Trail, asking people to look and touch but not to take. (About 5,000 rocks went missing early on.) 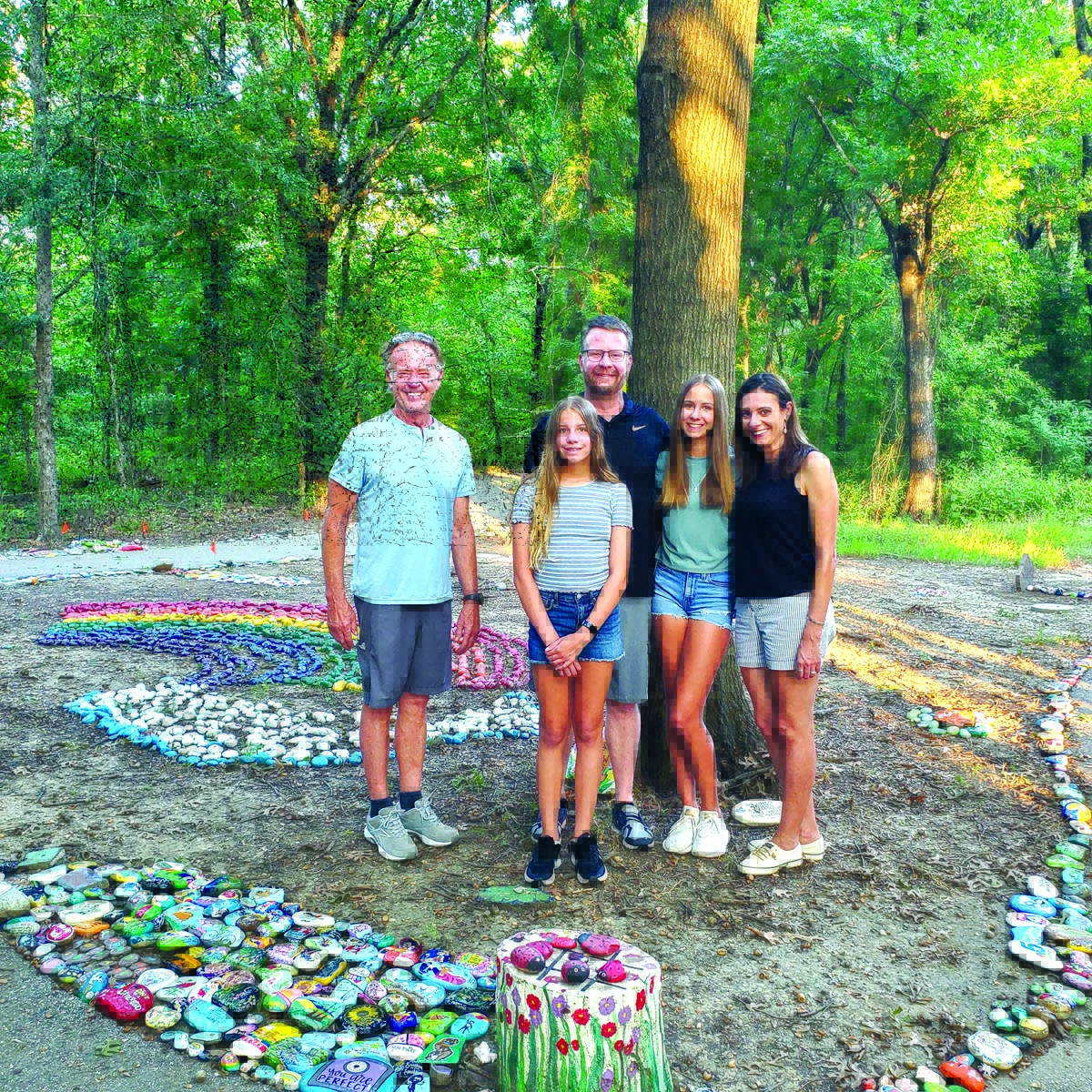 From left, Olsen with Chris Penny and Penny’s daughters Julia, 12, and Sophia,14, and wife Nalu 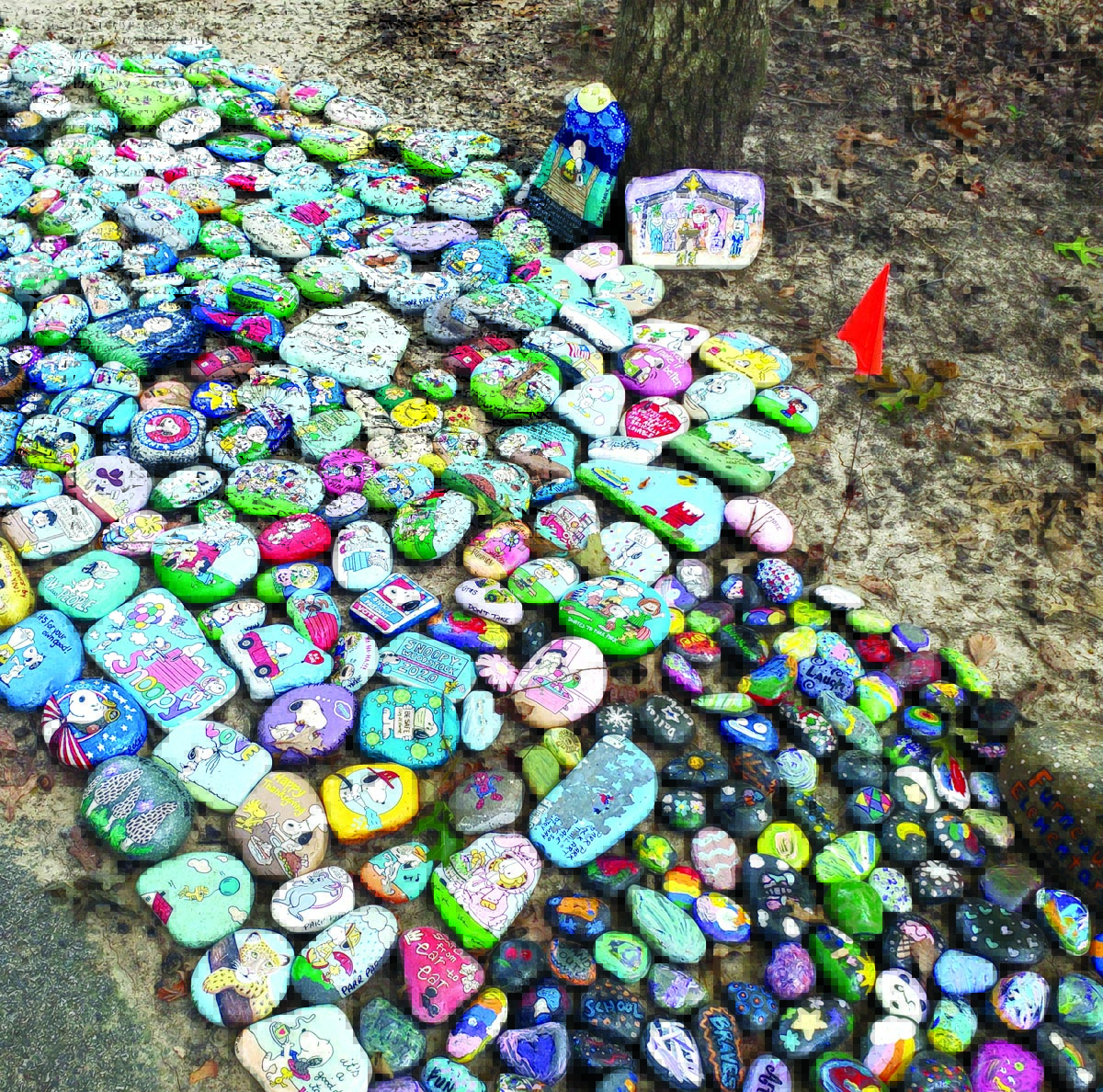 A cluster of rocks with a “Peanuts” theme: The orange flag, used while counting prior to applying for a Guiness world record, signifies 100 rocks.

When Olsen met Penny, who also had been painting rocks with his family — as well as receiving rocks mailed by friends and strangers who had heard about the project — both men noted the same things: the increased number of older couples walking hand in hand along the trail; more runners and cyclists; laughter echoing through the park; and the excitement of kids when they found a favorite rock.

Interest just kept growing. Volunteer artists from Waco to New York now paint rocks for the trail, and a woman in Vietnam — her work is beautiful — holds the unofficial title of “most-distant contributor.” “We have about two dozen frequent contributors,” says Penny, who admits the daily routine of unloading boxes of mailed rocks, piling them into his car and hauling them out to the trail is a workout. He says the spirit of the people he has met on the trail and the bonding time with his daughters makes it worthwhile.

“The notes I get from total strangers are incredible.” He points out a rock that reminds him of a trail visitor who was harboring suicidal thoughts when she arrived for one last run. She wrote Penny to say that the joyful messages she saw gave her hope. And she changed her mind.

Fast-forward to late August. One steamy pre-dusk evening, we walk the mile-long trail as we talk with Olsen and the Penny family about their newest project, one that is both inspiring and poignant. With the pandemic taking so many lives, they’ve created a memorial section dedicated to those who have died of COVID-19. Sadly, there are more than 7,000 placed. 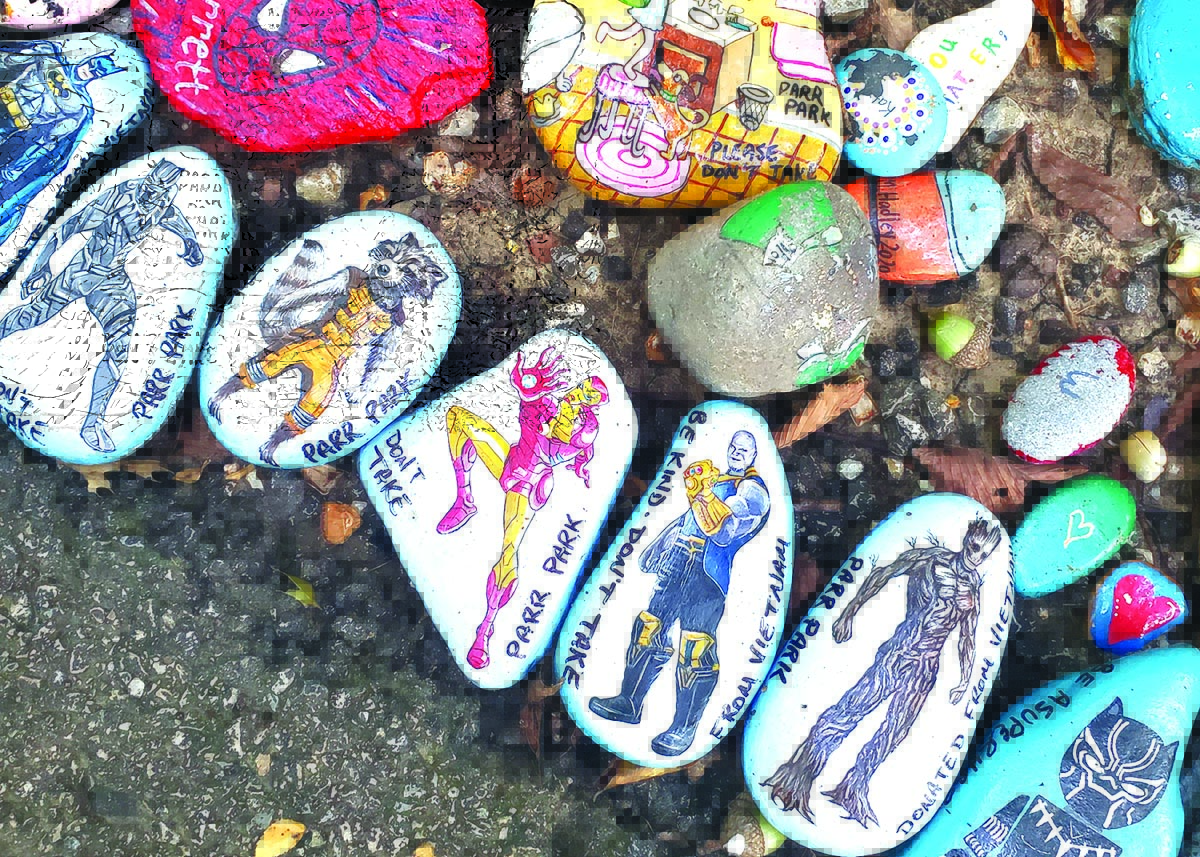 A woman in Vietnam painted and mailed in these superhero rocks.

As you read this, there’s a good chance the Parr Park Rock Art Trail has been entered into the Guinness World Records for the largest number of painted rocks in a single area. Efforts ramped up recently, making the record well within reach (rocks numbered more than 20,000 on our visit). One caveat is that to qualify in the final count, all the rocks had to touch. Volunteers had been showing up faithfully to realign them along the path and in groups (colleges, countries, canines, the “Peanuts” gang, Disney themes, etc.). We sent this magazine to the printer before the actual certification, but record or no, the trail remains a monument and a beacon of hope. Learn more at facebook.com/parrparkrockarttrail.