Press enter to begin your search
FeaturesSlideshowThe Give Back 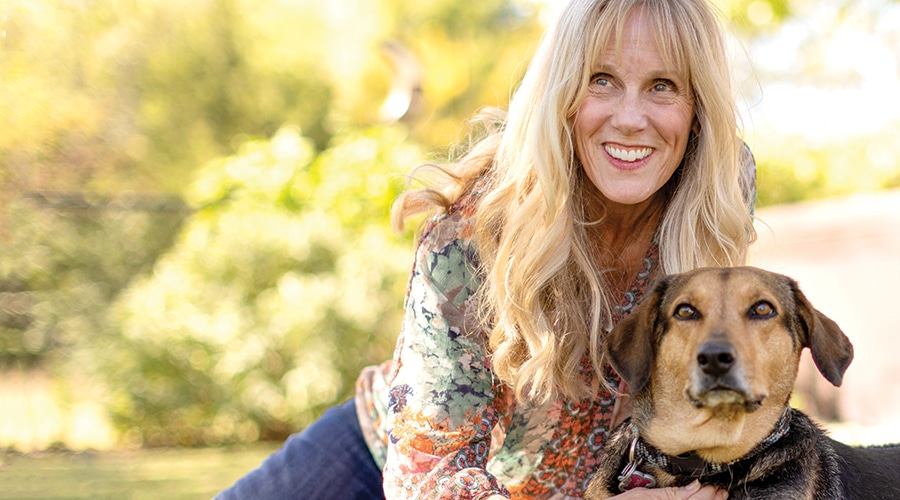 For the Love of a Dog

We get out of the car and spin slowly, taking in the expanse of undeveloped land embracing the house we’ve come to visit. Everywhere we look, we see places a frightened or wounded animal could easily disappear. After ringing the doorbell, we hear a soft “woof.” When homeowner Stacie Sauber answers, she is quickly nosed aside by Clovis, whose tail is wagging so hard that the happy dance threatens her three-legged balance. It’s hard to believe the friendly pup once was a wily stray diving in and out of the woodsy property along Dove Creek.

Clovis has become a sensation of sorts in the last couple of years, first on Nextdoor, the community app where neighbors shared sightings of the dog, along with angst related to her unhoused status, and then on Facebook, where Stacie began sharing the pup’s story almost a year ago. The page shares the name of Stacie’s recently released book: I Never Wanted a Dog. 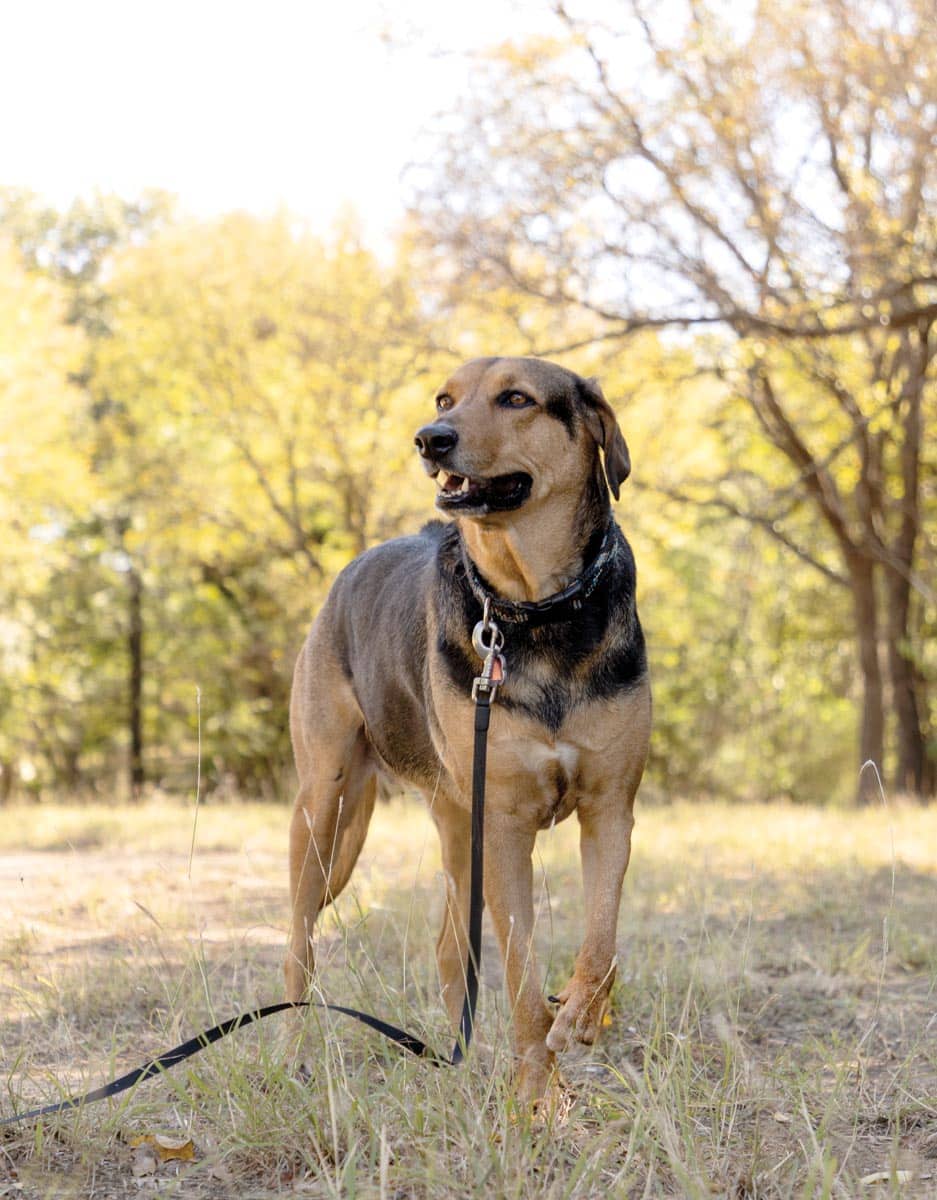 Most of the dog’s front paw is missing below her left wrist, or carpus; a vet believes it to be a congenital malformation. The woods behind her is one place she hid out during years of living rough. 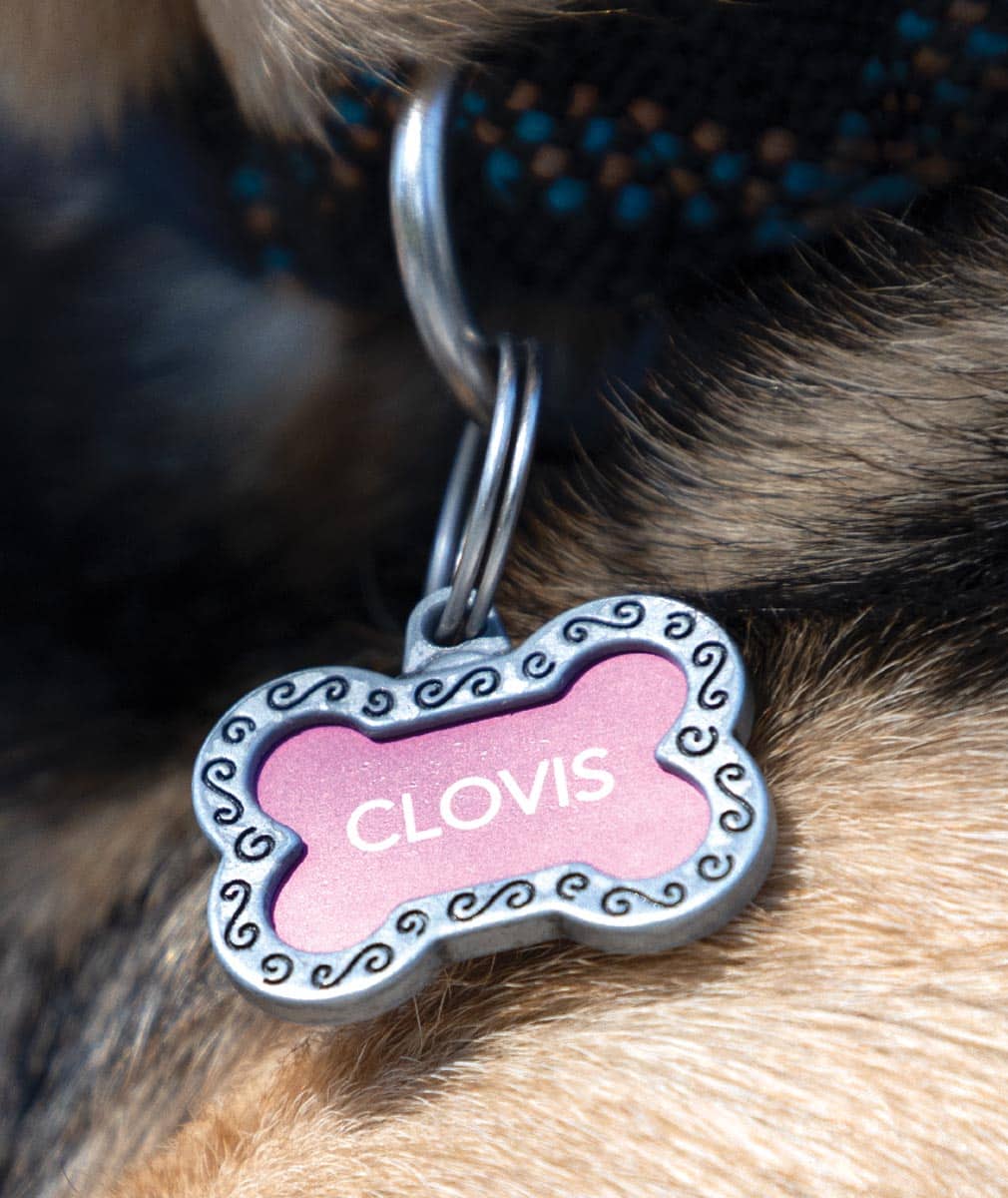 The cover photo of Clovis just doesn’t do justice to the stately ridge of fur we now stroke along her backbone or the regal stance that is hard-won given that she is missing most of a front paw. As she sizes up her visitor, the kind tawny eyes and toothy smile belie her rough history.

Stacie, who raised four children in Southlake, suffered her own deprivations following a divorce in 2001 that left her negotiating life as a single mother while struggling to operate her personal training studio, Purely for Fitness. Referring to the book’s title, she says, “When I was working and raising my children, a dog was a commitment of time and money I could not afford.” Her kids grew up with two cats, both of which are now seniors living with Stacie in the Grapevine home she shares with Randy Wolf, also a personal trainer and her husband of 8 years.

Randy and Stacie met through their running club and have transformed a stand-alone cottage adjacent to their house into a fitness training studio. Their home sits on a third of an acre, but the property feels much larger given an embrace of city-owned land. Critters of all kinds are frequent visitors, from deer showing up on the daily to nocturnal visits from coyotes, raccoons and an occasional bobcat.

In 2019, Stacie became aware of a new furry presence on a lot across the street that at the time was undeveloped. “I saw the dog sitting out front when I was in our front room sewing,” Stacie says. “You just don’t see loose dogs around here.” Thinking someone’s pet was lost, she ran across the street, but the dog quickly disappeared. A couple of months later, the pup reappeared and seemed to be limping.

On the neighborhood networking site Nextdoor, Stacie discovered the “wild” dog had been seen in the area for at least two years. “There had been so much discussion about her that it seemed clear no one was looking for her,” Randy says. In answer to Stacie’s determination to slowly win the animal’s trust, some comments were unkind. “People said, ‘Just trap her,’ or ‘Call animal control,’ ” she says. But the couple learned that as many as six police officers had answered calls to help capture her, never getting anywhere close. “She was fast,” Stacie says. “And smart.” 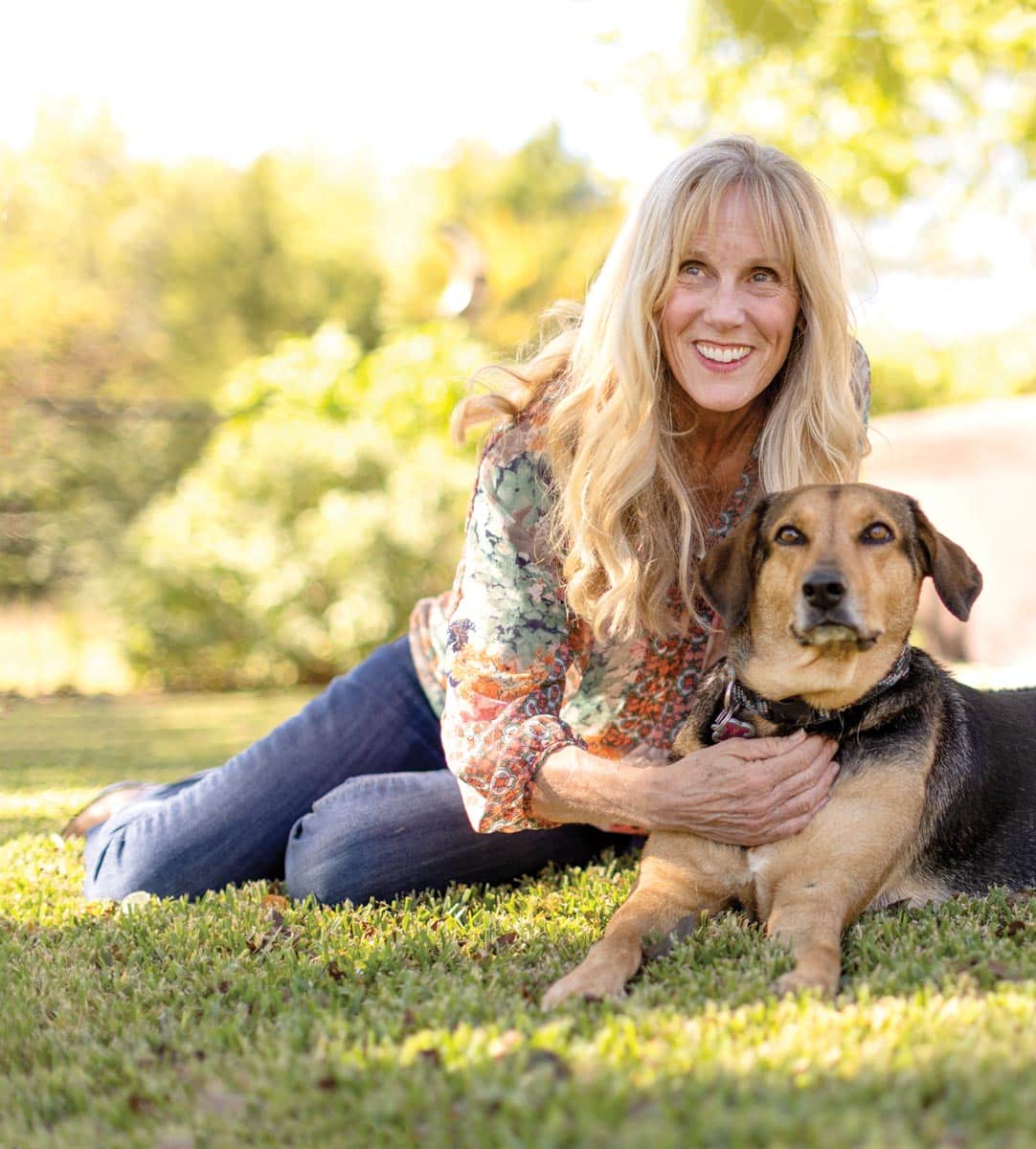 The former stray’s past is a mystery, but a DNA test has revealed Clovis to be predominantly Rhodesian ridgeback and German shepherd. Stacie reached out to a professional writer to help her with the book, but he felt she had a natural storytelling talent and encouraged her to tackle it herself. “I just got on my computer and started writing,” she says. “And I had three chapters written within a week.” 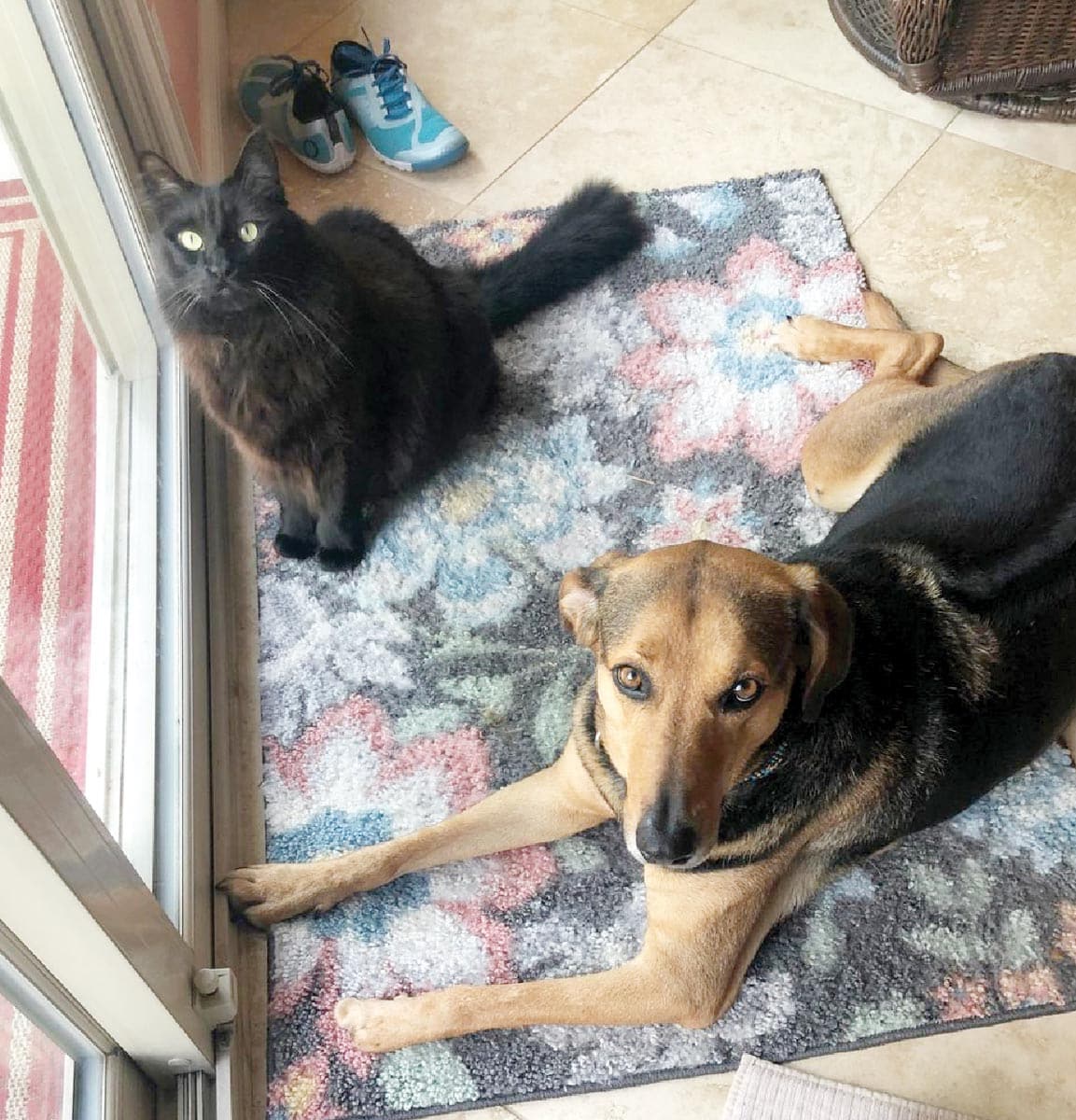 Stacie believed their alpha cat, Rocky, would not accept Clovis. “Rocky hissed once or twice and within three days of Clovis coming inside (she never barked once), she was accepted as part of the family.” Photo courtesy of Stacie Sauber

During free time afforded by the pandemic in early 2020, Stacie felt increasingly connected to the dog, always delighted to catch glimpses of her. But when the winter storm hit in February of 2021, Stacie feared for the dog’s life. As temps plummeted, she would go out every few hours to break the ice on bowls of water.

“And then it snowed. We saw no tracks from any animals but her. That was when it became my mission to get her safe.” While the dog remained wary, her appearances became more predictable as Stacie began making regular visits to what had become an active building site across the street, trying in a variety of ways to create havens of comfort using straw and tarps.

The tale of the agonizingly slow win of trust is documented in Stacie’s book, which she wrote with a bit of coaching by professional author Marvin Cloud. As Stacie’s commitment grew, she felt she had to give the dog a name. “I googled ‘names that mean warrior or survivor,’ and when Clovis popped up, I knew that was her name.”

After almost a year of leaving food and treats, lying awake at night, shedding tears and sending up prayers, Stacie’s anxiety increased as winter again approached. But everything changed Thanksgiving week of 2021. Holiday free time allowed extended daily visits across the street, where Clovis would hang out during the day. At a nonthreatening distance, Stacie would sit for 30 to 45 minutes at a time, sometimes up to a total of six hours a day, just talking quietly or singing. “I’m sure people passing by thought I was crazy.”

By this time, Clovis had already begun reshaping Stacie’s world, even becoming a topic of conversation at her Bible study class at Gateway Church. But from the day the dog actually took a treat from Stacie’s hand, the pair have been bound by what Stacie feels is God’s plan for her life — and by extension the lives of the more than 600 friends and neighbors touched by the Facebook post announcing the day Clovis “came home.” 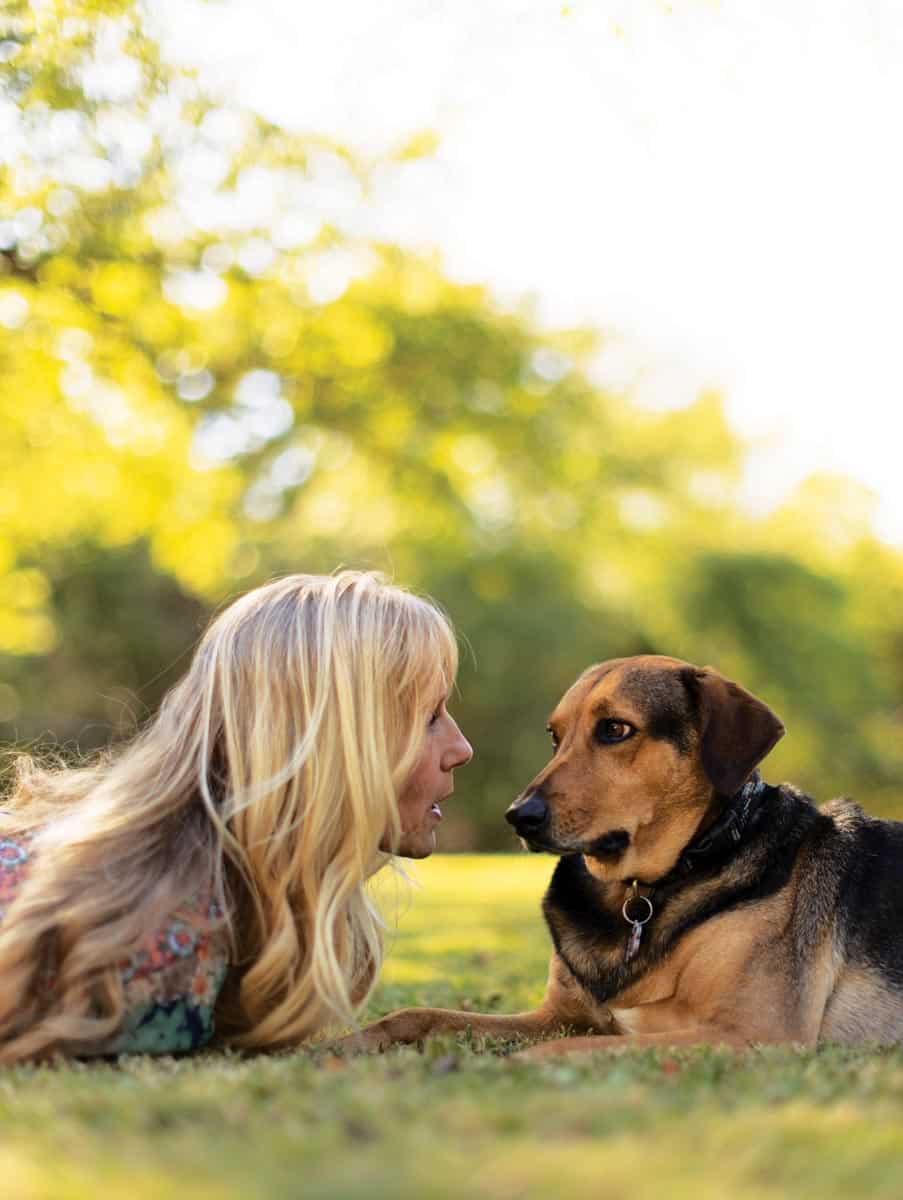 “I am a woman of faith, a Christian,” Stacie says, as Clovis — temporarily replaced on the sofa by a guest — curls up at her feet. She admits there were many incremental steps between this happy moment and last November’s breakthrough, but says her effort was rewarded with a revelation. Simply put, Clovis reshaped Stacie’s understanding of patience, compassion and spiritual love.

“When I was able to give so much time and concern, hours and hours of effort, to a creature who ran and hid from me time and again, I began to think this must be how God feels about us.”

A year on, Clovis is a little chubby and clearly at home with her people and even the kitties (more remarkable is cranky alpha cat Rocky’s acceptance of a canine sister).

“Mellow” best describes the dog’s nature, but because she still refuses to ride in a vehicle, a mobile vet must come to her. Miraculously, although she did have to undergo heartworm treatment, she was otherwise in excellent health from day one. “She didn’t have a tick or a flea on her,” Stacie says. The missing paw turned out to be a congenital malformation; she walks with a limp, but she runs like a tripod champion.

A lot of the unknowns that had Stacie in tears over the year that she wooed Clovis will most likely never be known, but Clovis has settled into a routine cushioned by trust. She remains a constant reminder to Stacie to put into action the lessons learned about giving to others even when there is no quantifiable result. “I just feel like God was saying that if I can find this much within me to give to an animal, why not to human strangers?”

I Never Wanted a Dog The story of Stacie Sauber’s life-changing yearlong pursuit of Clovis is for sale online and at the Southlake Barnes & Noble. The author is signing copies at the bookstore from 11 a.m. to 4 p.m. Nov. 12. Southlake Town Square, 1430 Plaza Place, 817-442-0207, barnesandnoble.com