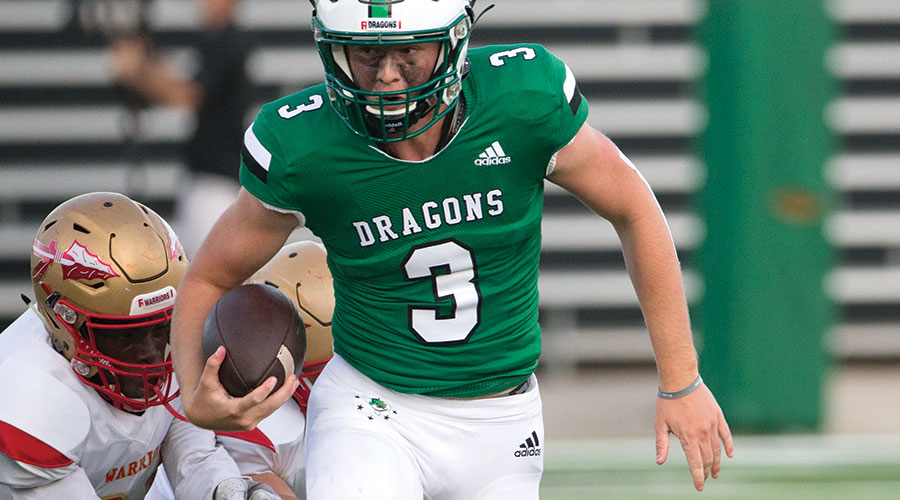 Quinn Ewers’ talent and confidence have him poised to lead the Dragons in stats and on the field.

For Quinn Ewers, it didn’t take long for things to click. Early in his first varsity game a season ago against South Grand Prairie, the sophomore starting quarterback for the Carroll Dragons broke free for a long run.

He knew instantly he belonged under those bright Friday night lights he had dreamed about. He grew up wanting to be on that stage, and when the moment arrived, it wasn’t too big. And the game wasn’t too fast.

From there, it was on.

“After that run I got some confidence and started playing football,” Ewers says.

And did he ever. Ewers posted stats that explode off the page in a program steeped in quarterback tradition. The final tally: 4,003 yards passing, 45 touchdown passes against only three interceptions, 568 yards rushing and an additional nine TDs on the ground.

As telling as the numbers were, the results were more so. The District 4-6A champion Dragons went 13-1 and reached the regional finals in the inaugural year of the Ewers era.

“You can say it was a perfect storm for him,” says Carroll coach Riley Dodge. “A lot of the guys on offense were seniors. They had played a lot of football, so he could just step in the huddle and just play. They could be the vocal guys and take some stuff off his plate.

“Now, he’s got to take that next step, and that’s what you want in a quarterback: understanding defensive football and being able to dissect pre-snap and post-snap. I think things are going to slow down for him, which is a little scary.”

Scary for opponents, that is.

Ewers, standing 6-foot-3 with a cannon right arm and nearing 200 pounds, already elicits fear in foes and drool from college coaches. His obvious physical tools are complemented by a calm demeanor and willingness to do the homework required of the position.

He’s got “it,” according to his coach. Tabbed the top recruit in the country in the class of 2022 by ESPN, 247Sports and others, he has already made national news by committing to the University of Texas.

“His strength right now is he’s so even-keeled,” Dodge says. “That’s what you want in a quarterback. He’s cool, calm, collected. He doesn’t get too high with his highs or too low with his lows.

“He’s a tough kid. He’s going to stay in the pocket and deliver the football. He earned the respect of the senior class last year by his makeup and how he handled things.”

Last season, Ewers had eight games with 300-plus passing yards and 10 games in which he threw at least three touchdown passes. Senior receiver Brady Boyd (66 catches for 972 yards and eight scores) returns as Ewers’ top target.

“He’s always going to put the ball on the money,” says Boyd, a Minnesota commit. “It’s up to us to get a step or two on the DB because that’s all we need with him. We want to see him succeed as much as possible with all the hype around him, so you know you just want to provide for him as much as possible and just get open.”

The Dragons have gone 26 and 2 over the last two seasons, with both losses coming against Duncanville deep in the playoffs. Ewers would be lying if he says he’s not looking forward to a shot of postseason payback against the Panthers down the line.

“Obviously, it’s motivation losing to them twice in a row, but we’re just focused on game 1 right now.”

Spring workouts and summer 7-on-7 practice were axed because of the coronavirus shutdown, leaving the team unable to get in much practice. They were able to find places to throw the ball around, but it was hardly a normal offseason. Ewers and his teammates instead worked off the field; Zoom meetings focused on the mental side of the game and building chemistry.

“It’s been tough. We had 18 starters graduate, so spring ball was going to be very important, and obviously, that didn’t work out. It’s definitely a different year this year, but we’re trying to control what we can control. I don’t think we have any health concerns about the virus. We want to get back to playing football.”

The loss of so many starters, even for a program as rich in talent as Carroll, is significant. Not that Ewers is losing any sleep. He’s played with many of the guys who are moving into contributing roles, going all the way back to middle school.

“Just rebuild,” Ewers says. “That’s what Southlake has always done. I’m not too worried about it. Just rebuild and protect that tradition.”

Much of the added responsibility is being placed on Ewers. The Dragons, from the coaching staff on down, expect a lot from him.

“Every program, from high school to college to the NFL, starts with the quarterback,” says Dodge, now in his third year at Carroll. “We’re lucky to have Quinn, and I’m really excited to see him take that next step going into his junior year. Obviously, the kid is very talented and had an amazing sophomore year.

“Now his next step is really the intangible pieces of it. We don’t have a lot of guys coming back, so we’re going to lean on him to be our leader on and off the field.”

“He’s only a junior, but he doesn’t seem like it,” says Allen, who burst onto the scene as a freshman with 1,266 yards rushing. “I feel like he’s been a senior for the past two years. He leads this team and people look up to him; the town looks up to him.”

As for being touted as the top quarterback — and junior — in the country, Ewers just lets it roll off his back. Committing to coach Tom Herman and the Longhorns early is a luxury going into his final two seasons of high school ball.

“I’ve grown up watching the University of Texas, and my whole family just loves Texas,” Ewers says. “It’s always been a dream for me to play there. I just felt like it was time to get [my recruiting] over with, and I could focus a lot more on high school and bring a state championship to Southlake.”

The quarterback legacy at Texas is right up there with Carroll’s. The high school program has produced the likes of Chase Daniel, Greg McElroy, Kenny Hill and its current head coach. That’s a lot to live up to.

It’s something that Ewers appreciates. He respects the lineage; after all, he visualized following in their footsteps before a hometown crowd 11,000-strong at Dragon Stadium. But the program’s history of renowned signal-callers is just that; it’s history.

What came before won’t define Ewers.

“I just try to play to the greatest of my abilities instead of focusing on the other great quarterbacks before me.” ν 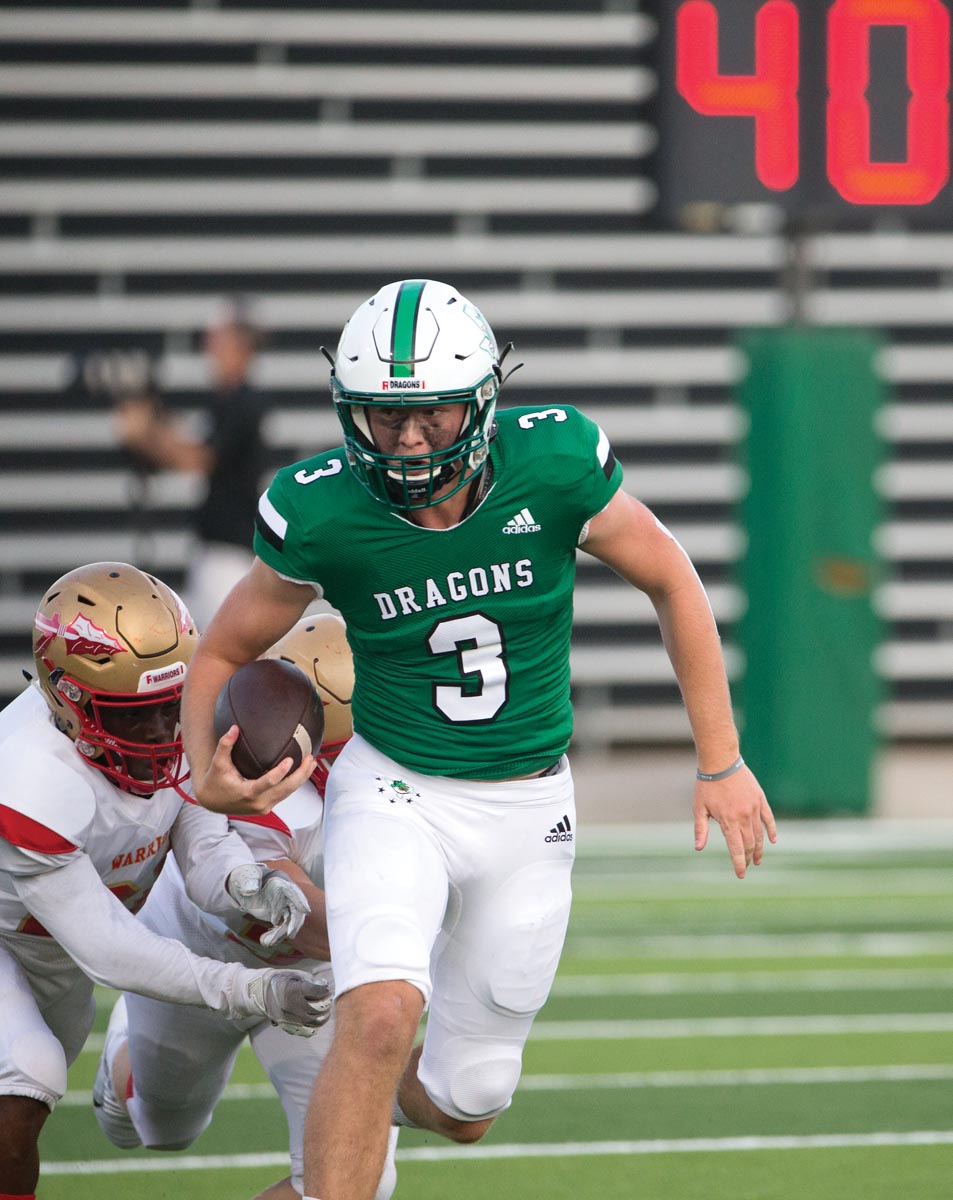 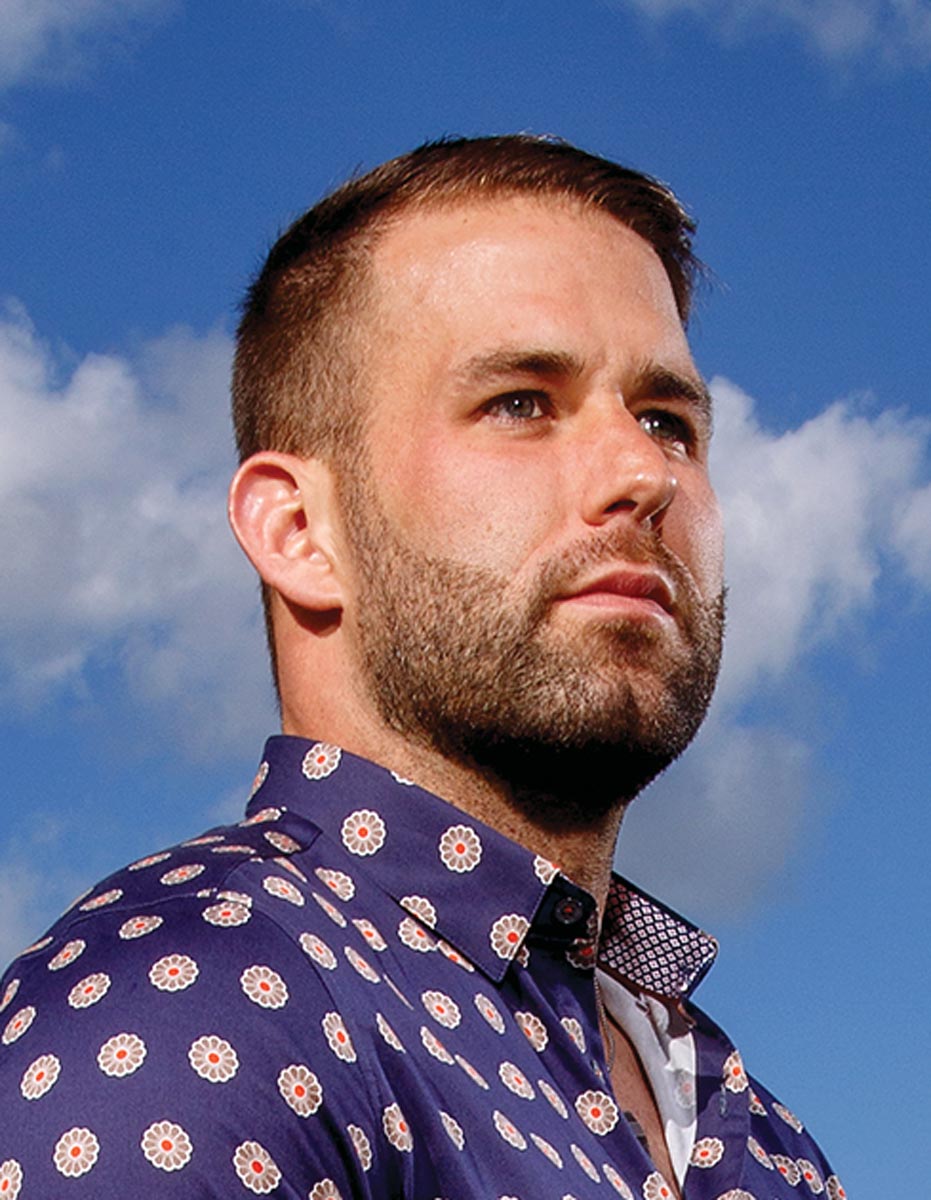 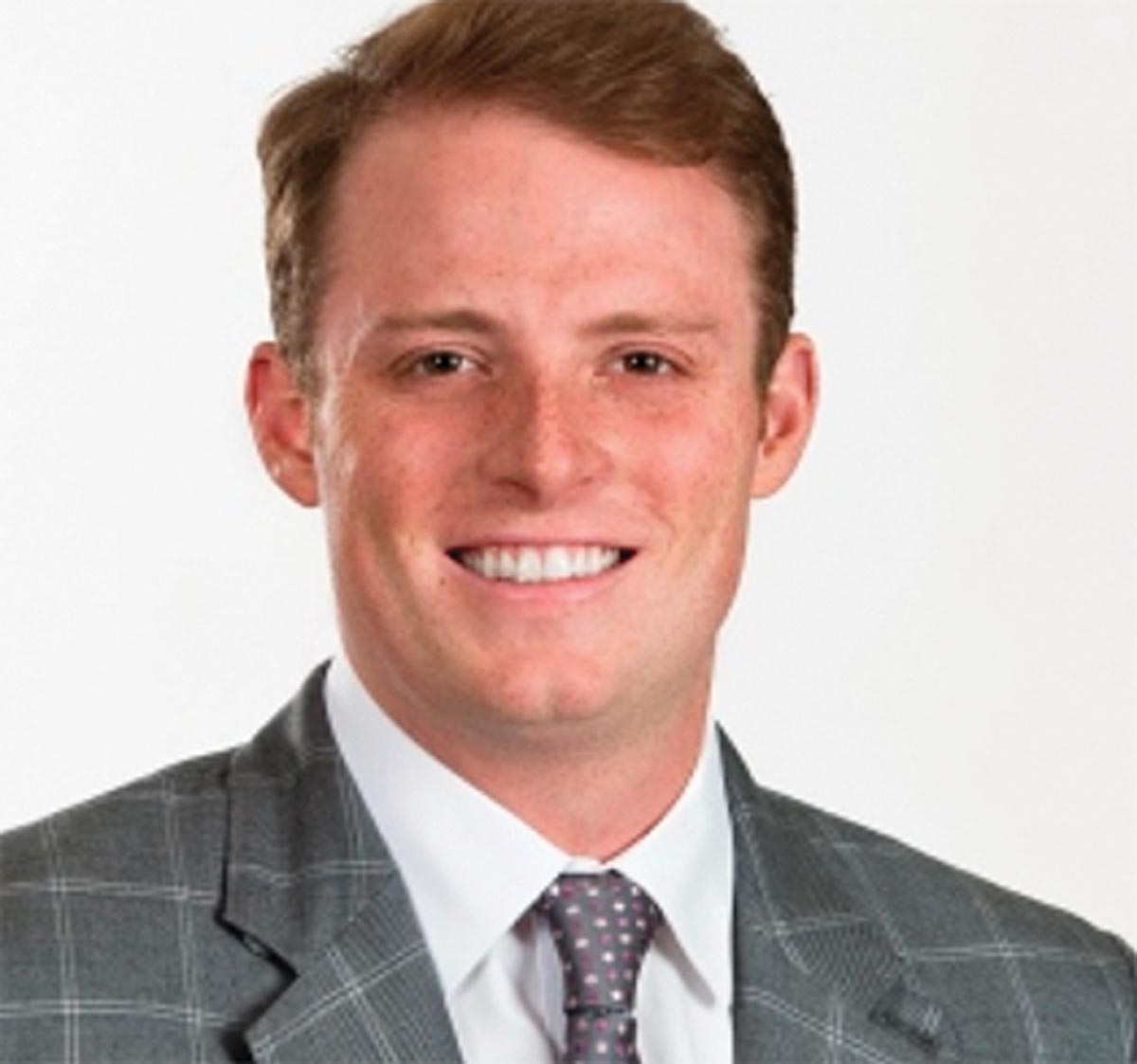 Quinn Ewers is emerging as a legitimate heir to a great quarterback tradition in Southlake, including these state-championship winners.

Greg McElroy Now a college football TV talker, McElroy succeeded Daniel and passed for a Texas Class 5A record 56 TDs during a 16-0 state-championship campaign in 2005. He also was part of a college national championship at Alabama in 2010.

Riley Dodge As a junior in 2006, Dodge passed for more than 4,100 yards and 54 TDs for the Dragons, who won the state Class 5A title for a third consecutive year. Under Hal Wasson the next year, Dodge passed for 3,445 yards and 39 TDs, losing in the regional semifinals and ending Carroll’s 58-game win streak against teams from Texas.

Kenny Hill In 2011, Hill led the Dragons to the school’s eighth state title by passing for 3,014 yards and 25 TDs. The next season, he was selected the
Texas Gatorade Football Player of the Year.