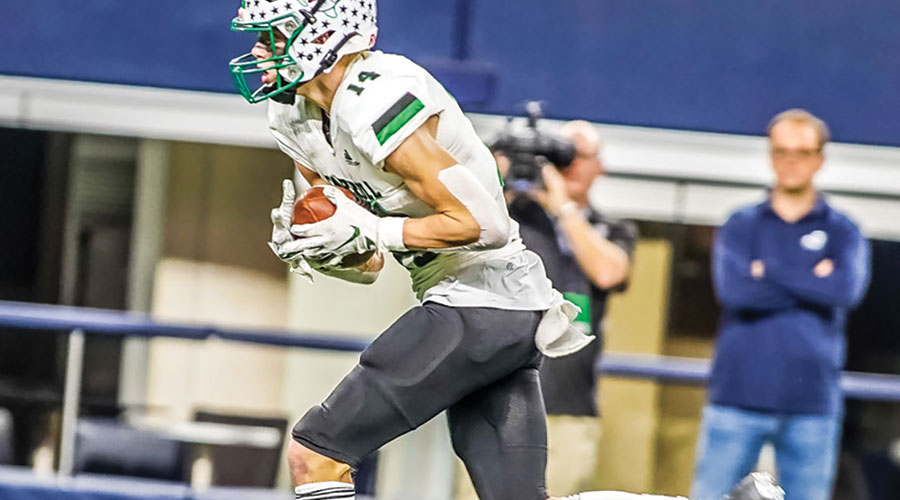 By Carlos Mendez
Photos by Jeremy Enlow. Above photo by Greg Hammer

Dragons football is built around throwing and catching the football. Brady Boyd is at the front of the line of a receiving corps with exceptionally good hands.

Maybe that’s an exaggeration. Some people do, probably. Start of a new week, fresh opportunity and all that. But hindsight can tricky.

Brady Boyd doesn’t want to leave anything open to whys or how comes? It’s why the Carroll Dragons receiver catches everything that comes his way from his friend, quarterback Quinn Ewers, who enters the 2020 football season as the top signal-caller prospect in the 2022 recruiting class and a University of Texas commit.

Boyd wants to avoid any kind of side-eye from Ewers.

“You never want him looking at you and going, ‘Dude, come on now,’” Boyd says with a smile. “We’re always trying to be there for him, and he’s always trying to put us in the best position to make the play.”

That happened a lot in 2019, and it figures to happen a lot this season. Boyd caught 66 passes a year ago, including a leaping one-hander that he came down with in stride in a playoff game against Midland Lee. It was SportsCenter-worthy — no kidding, it really was on ESPN — at No. 3 on the Top 10 Plays of the Day.

By then, deep in the season, the Dragons weren’t surprised. They had watched the 6-foot-1, 175-pound wideout do his thing in a season that resulted in eight touchdown catches. Five scores came in the four playoff games, and a career-high 11 catches came in the high-scoring 6A Division I regional final showdown against Duncanville.

“You can’t ask for much more than that,” Dragons cornerback Avyonne Jones says of Boyd’s physical and mental makeup. “He’s your prototype receiver.”

Lots of colleges thought so, too. Texas Tech, Oklahoma State and Boise State were among 18 schools to offer scholarships. In April, the three-star prospect said yes to the University of Minnesota, one of the first programs to recruit him.

He’s going to be a Golden Gopher, though nothing about him resembles a burrowing land tortoise.

“Minnesota’s told me they’re going to move me around as a wide receiver and get me into open space as much as possible,” the senior told Gopher Illustrated.

“I love that idea, as that’s all any receiver wants.”

No doubt it sounds good to Carroll, too.

Dragons football is built around throwing and catching the ball. Boyd is the returning statistical leader on the team, which can also deploy pass catchers such as Landon Samson — a fast wideout with a classic build like Boyd’s — and Josh Spaeth, an underneath maestro with an aggressive mentality.

Each was among the many receivers who’ve made a splash when given the chance.

“We’ve got some guys that really stepped up,” says head coach Riley Dodge. “That’s the special thing about this place. They get their opportunity, and they take full advantage of it.”

The roster of receivers is deep but untested. When the season starts Oct. 2, however, the balls will be flying and winding up in green-gloved hands, as usual, if you ask the quarterback. 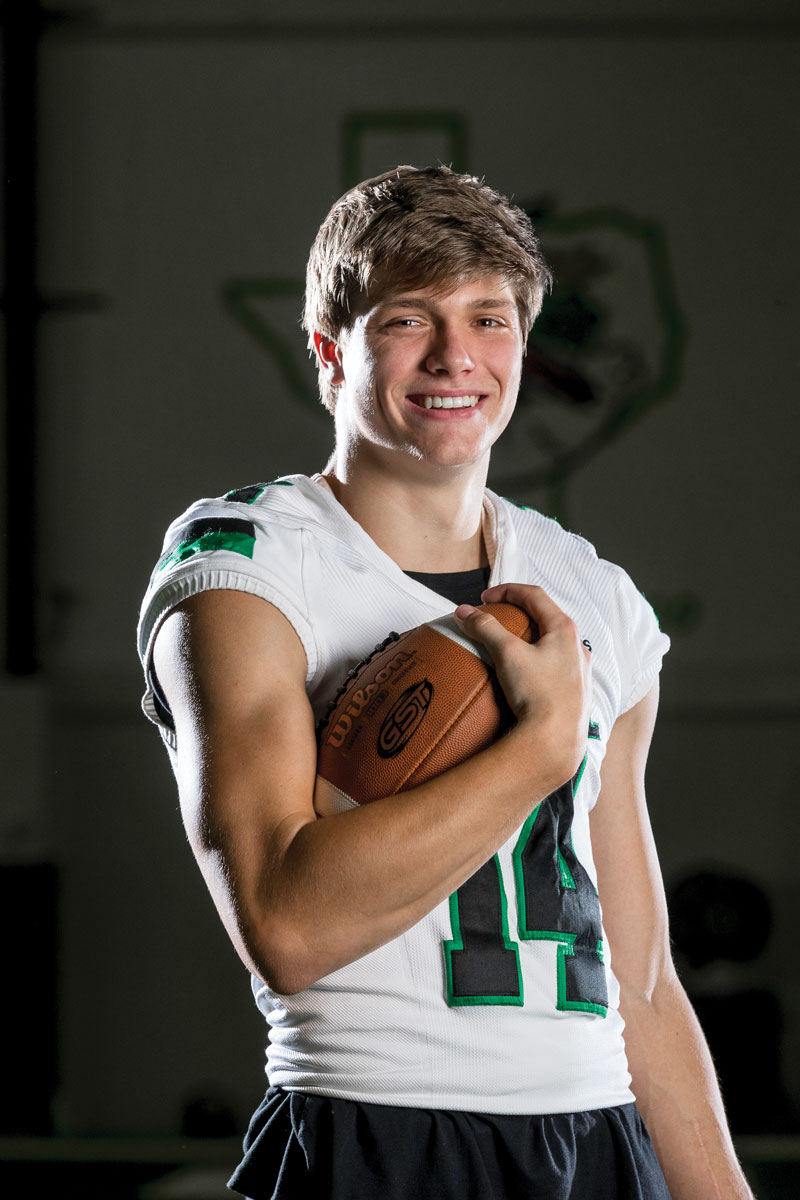 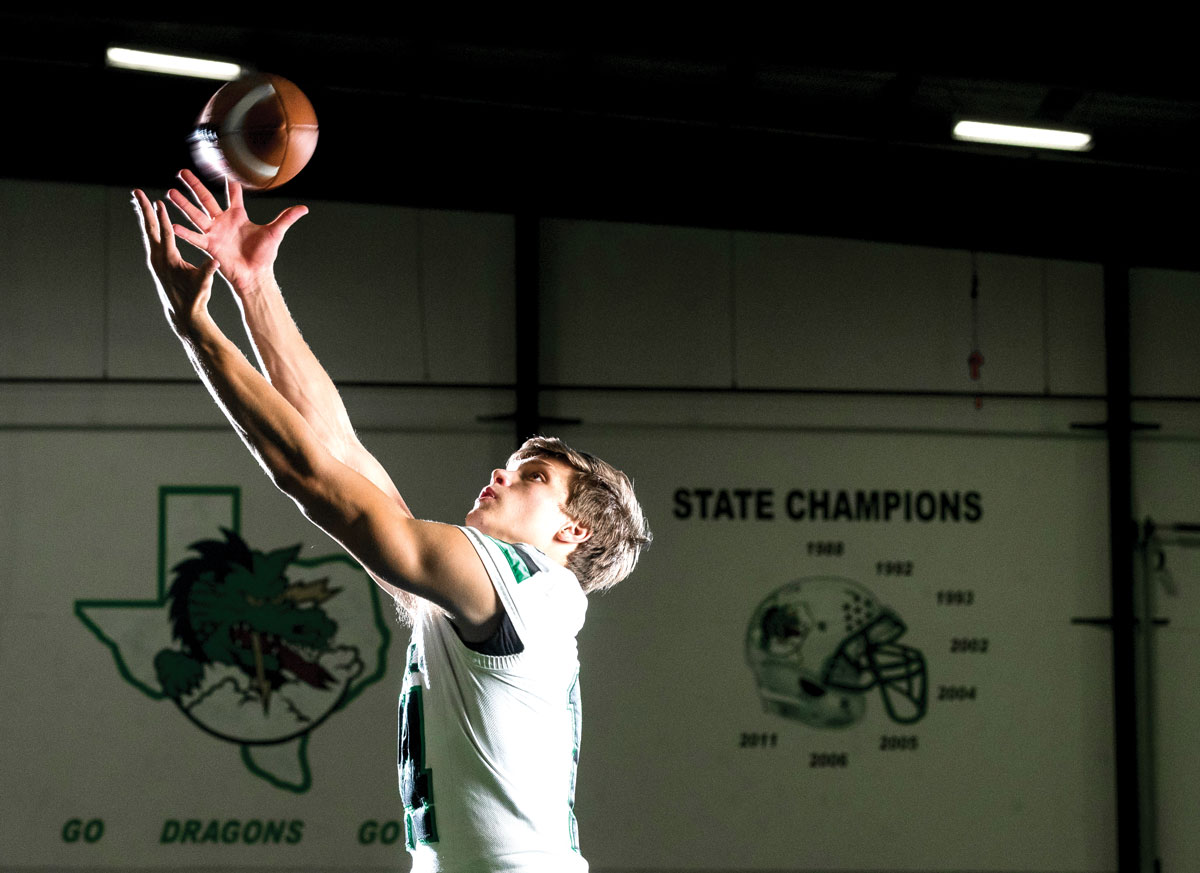 “We threw a lot last year, and obviously we’re going to throw a lot this year,” Ewers says. “I have faith in those guys to run the correct routes and get their depths.”

Ask the Dragons defenders, too. They’ve seen it in practice long enough to know.

“They’re fast, and they’re very technical route-runners,” Jones said of his teammates in the receiver corps. “Everything they do is very precise.”

These observations sound a lot like the scouting report on Boyd. Recruiting site 247Sports describes the Carroll star like this: “Above-average frame with lean, athletic build that can hold more bulk. Impressive verified speed in a combine environment (4.44, Spring 2019). Stacks corners and stretches the field vertically. Shows the top-end speed to outrun the secondary in the open field. Good production against great high school competition playing for one of the top programs in Texas Class 6A. Ball-aware and knows how to adjust on the fly. Flashes encouraging route leveraging. Two-sport athlete who runs track. … Power Five-caliber receiver with promising tool set to become potential multi-year starter in college.”

But that’s down the road. What’s in front of Boyd is the 2020 Dragons season and his job as a target for Ewers, who rode 45 touchdown passes as a sophomore into five-star status.

“He’s always going to put the ball on the money,” says Boyd. “It’s up to us to get a step or two on the DB because that’s all we need with him. We want to see him succeed as much as possible with all the hype around him. So, you just want to provide for him as much as possible and just get open.”

Dodge, who in his playing days led Carroll on two state championship teams, knows what a quarterback is looking for in his receivers. It’s the same thing he saw Boyd earn last season in the year’s biggest games.

“It’s a lot of responsibility for a receiver making that quarterback trust you once it’s crunch time,” Dodge says.

“That’s built through the spring and the summer and right now in fall camp. That’s what I tell the receivers — if you catch the ball and you run great routes, then you can expect that quarterback to come back to you.”

The players know Dodge looks for 100 percent from each of the 11 players on offense and defense. Boyd takes the expectations in stride.

“Coach Dodge always talks about our 1/11,” says Boyd. “Our 1/11 as receivers is to get open and catch the ball. There’s a little bit of pressure when it comes to just doing well, but that pressure comes when you’re trying to do anything well in life.”

For years, the Dragons have thrown and caught the ball well. Boyd and Co. are next in line on the receiving end of the formula.

“We just try to do what we’re supposed to do — provide for the team,” Boyd says of himself and his fellow pass catchers.

“If we’re doing our job and everyone else is doing their job, we should have a good outcome.”

And a good start to the week.