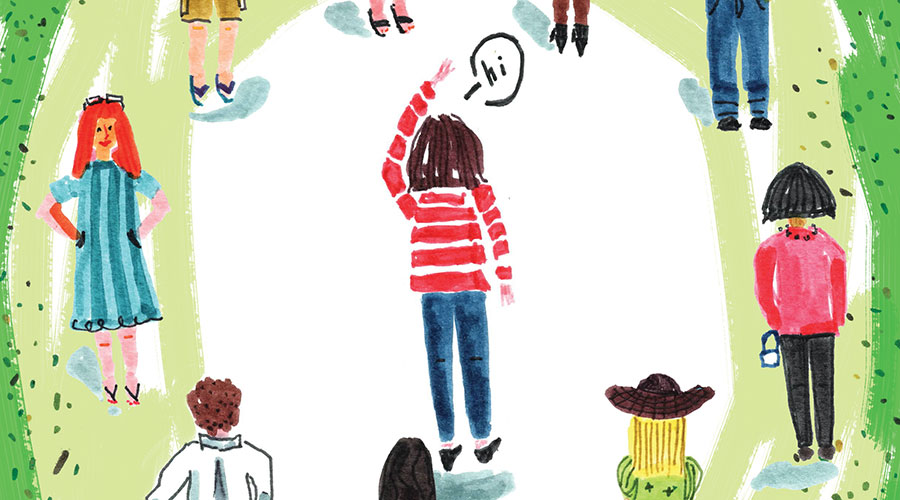 The bold act of saying ‘hello’

A friend of mine recently jumped out of an airplane. I love a good bucket list adventure but, just between you and me, I thought she was nuts. Skydiving from a Cessna 182? No, thank you. Still, I was jealous. But it wasn’t my friend’s jump that I envied. It was her courage.

Eleanor Roosevelt is said to have challenged people to do one thing every day that scares them. Theoretically, I see the value in this but, unfortunately, I am a scaredy-cat. A bump in the night jolts me wide awake, frozen to my bed. A midday drive to Dallas leaves me white-knuckled, paranoid and tense. And skydiving? Forget it. It’s not going to happen. The truth is, I am reluctant to do just about anything that has the potential to be scary, much less do it every day. Doing these things requires courage, big actions and bold responses. Or at least that’s what I used to think. Now I know better.

A few years ago, several of my neighbors and I were gathered in a driveway across the street from my home. As we were visiting, a car drove by and stopped. Slowly, it reversed back to our cluster of folding chairs. A waving hand emerged from the window, and the driver shouted out a friendly “hello.” I don’t remember which neighbor responded first, but in an instant we were speaking all over each other, encouraging her to pull over and join us.

To our delight, the woman agreed, parked her car and walked over to where we sat. Without too much fanfare, she accepted a chair and joined our discussion. We had no agenda that morning; just a group of neighbors solving world problems over cups of coffee. The woman fit right in. After a bit, she said it was time for her to get to work and off she went. Later, I remember someone in our group asking what her name was. I guess we assumed that one of us must have known her — why else would she have stopped? It didn’t take us long to realize that she was a complete stranger to everyone.

The truth is, I am reluctant to do just about anything labeled as potentially scary, much less do it every day. Doing these things requires courage, big actions and bold responses. Or at least that’s what I used to think. Now I know better.

Jumping out of an airplane? That’s brave. However, when that driver said “hello” to a group of women she didn’t know, it was a unique act of courage and one that has earned a place of reverence in our neighborhood lore. Granted, pulling over and joining us that morning showed pluck and guts, too, but what I consider most bold was her first “hello.”

Each morning in my neighborhood, I encounter a number of people — moms and dads at the bus stop, runners, walkers, dog trotters and meanderers of all sorts. Most of the time we greet each other with a quick “hi” or a nod of the head. Once in a while, though, our eyes don’t meet and we pass by without acknowledgement. When this happens, I feel a bit slighted and, to be honest, such encounters (or lack thereof) bother me.

My husband tells me not to take this personally. More than likely, he says, no one is intentionally snubbing me. He reminds me that interacting with complete strangers is not for everyone. I know he’s right, but it makes me wonder what would happen if I tried to model my life after that woman who greeted us on the driveway that day. What would happen if I mustered just enough courage to say “hello” to the people I encounter during my day, especially those who don’t greet me first?

It could be a fun experiment or, then again, it could be scary. It’s possible I might get a funny look, and there’s a real chance I would be ignored altogether. It could result in a free cup of coffee or become material for a future magazine article.

Luckily for me, the woman who greeted a group of strangers is now a friend. She and her family have plugged into several gatherings since that day and are now an integral part of our community. Her courage continues to resonate in our neighborhood to this day.

Lauren Green, a native of Kentucky, has lived in Southlake with her husband and two children for 15 years. In addition to her work at home, she’s also an active volunteer in the community.