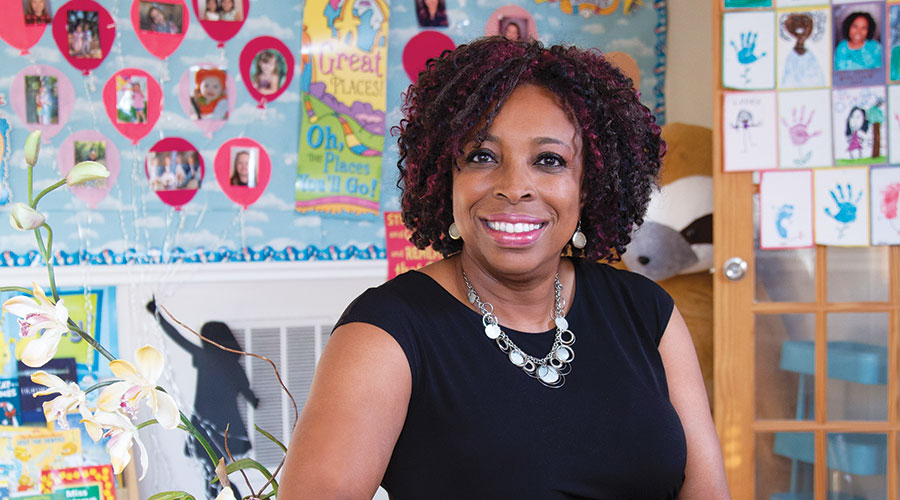 A Southlake preschool owner rolls with the pandemic’s punches — and everything else life throws her way.

Asked in August how she imagined the school year unfolding, Lisa Davis-Hendrix admitted that she doesn’t know. And she’s still OK with that. The director and co-owner of Excel Academy Southlake says staying flexible serves her well right now.

The educator, businesswoman, wife, mother, church leader and healthy-living advocate wants her private preschool to evolve as the times demand. Accommodating the learning style of each child, ages 6 weeks to 5 years old, remains central to the curriculum.

“Customizing the curriculum, differentiating the instruction, flexibility and partnering with parents are our major strengths; otherwise, it becomes just a day care.” But this fall, Excel has added instructional support for elementary-age children who have opted out of in-person attendance at area schools during the pandemic.

While continuing to serve preschoolers and provide after-school programs, Excel’s team oversees and supports kindergartners through fifth graders who arrive with Chromebooks, ready to log in to classrooms elsewhere.

The pandemic has tightened the focus on providing whatever is needed to ensure that learning happens — a core goal for Davis-Hendrix since she opened the Southlake school in 2017 with three partners. Davis-Hendrix is the only one of the four involved in the operational side of the business, and it is her heart’s work.

“I hadn’t planned on becoming a teacher, but I was living in California with small children, working as an educational journalist, and wanted to spend more time with my kids. I thought I’d give it a try. I began as a sub, then as an elementary teacher; I developed a passion.”

After moving to Texas (she lives in Denton) in 2001, Davis-Hendrix took a job at a charter school near Flower Mound, became a reading specialist and kept moving up during a tenure of 13 years.

“I absolutely loved being promoted from a teacher to a principal for over 800 students at the school where I’d been teaching. I’m thankful for it all: the good, the bad, the great and the small.  It was all meaningful, taught me a lot and helped catapult me into my destiny.”

She thought more and more about starting her own school and, as her job was unwinding, she took her shot. Working with investors, she opened a school in McKinney in 2014. It closed within six months.

Davis-Hendrix, who, along with husband Kenneth, is a youth leader at Antioch Christian Fellowship church in Corinth, was crushed: “I asked God, ‘OK, what do you want from me now?’ My faith, my husband, my true friends kept me going.”

A teacher gave her name to the owners of Excel Academy in Coppell (now located in Irving), where her now-partners were looking for a director. They offered Davis-Hendrix the job three times, but she remained unsure. “I told them I was looking to start my own school, but they asked me to help them out in the meantime. They had six students when I started, and I grew the attendance to more than 300.”

Eventually, they asked her to become a partner. “I saw what they were about and liked who they were as people. They returned the autonomy that had been stripped from me at the charter school.” When they decided to open a second Excel Academy in 2017, Davis-Hendrix knew it was her opportunity to create the environment she’d dreamed about, but she was hesitant.

“Coming to Southlake was not my first choice. I didn’t know what to expect. In Orange County, I had to adapt to situations very different from what I grew up with in Arkansas. From my point of view, I had no issue with being the only minority or being the only woman. In fact, sometimes when I’d hit a bump, I’d suddenly remember, ‘Oh, yeah, I am an African-American,’ or ‘Oh, I am a woman.’ I am who I was created to be and these children become my children.”

Her open, warm and sincere personality got people in the door; her curriculum, well-trained staff and after-school programs sealed the deal. “I understand education and the need to bridge the gap between early learning and academic success. It has not been easy, and we have hit several bumps in the road, including making necessary personnel changes. But, without those burdens, I wouldn’t have learned what I know today.”

When the pandemic hit in the spring, she had 78 children enrolled. The school closed for a month in April and reopened in May with 15 students, all children of essential workers. But while 52 students were enrolled in this summer’s programs, Davis-Hendrix began the fall semester with 30 kids.

“The major reason for the decline in enrollment is that some parents have chosen at-home learning for their child since schools have reopened,” she says. Virtual-learning attendance at Excel is limited to 20 students, the better to accommodate social distancing and keep the school-age kids separated from the little ones, who are now having to learn they can no longer share crayons. Hand-holding and hugs are off-limits, too. Rather than always saying no, staffers redirect activities in positive directions.

And Davis-Hendrix is doubling down on the flexibility required to meet the needs of parents whose work situations are in flux.

As for her own after-school hours, in addition to joining her husband in overseeing the “emerging adult” group at their church, Davis-Hendrix has been appointed the leader of the more than 200 women in the congregation. All meetings these days are via Zoom, but she continues to lay out a devotional plan each week.

“Spiritual wellness is as important as anything else. I’ve lost six family members this year, dealt with economic hardship and have been burdened by social injustice. Yet, I keep pressing on. Instead of just being busy, I pray more, read more, exercise more and reach out to family members. I do things that truly matter.”