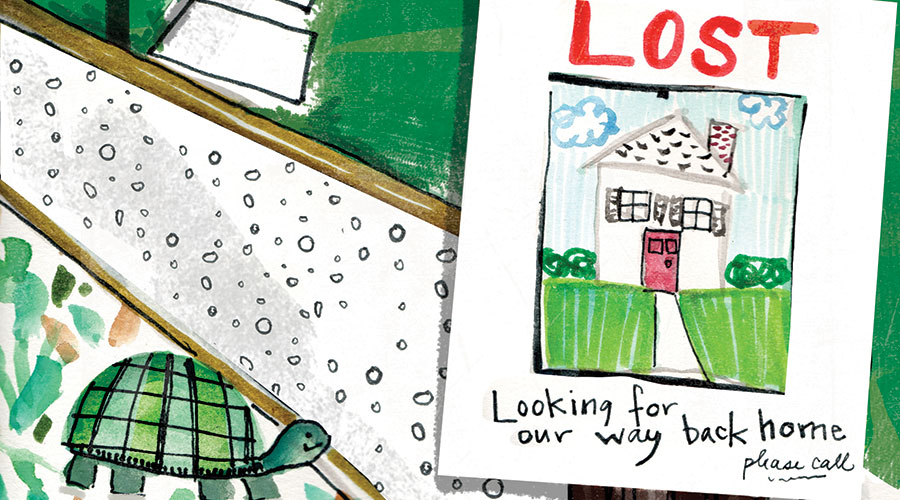 Like Froggy the turtle, we’ll always find our way home

Reading my neighbor’s text — “I’d rather stick a fork in my eye than run for school board” — I couldn’t agree more. Residents on my street were in the middle of a Q&A Zoom, listening to a local school board candidate navigate a laundry list of questions. We were all engaged in civic (and civil) discourse. Thankfully, I was forkless.

Like most neighborhoods, we are a hodgepodge of marvelous characters. I admit to rolling my eyes once in a while at the predawn runner, bad-mouthing the dog owner who doesn’t pick up after their pooch and even directing a pointed stink eye toward the occasional speeder. But when I want to know what the heck is going on with our Wi-Fi or who has an extra can of Ro-Tel, these are without question my front-line go-to people.

As the story has it, Froggy’s family took him outside for a change of scenery. I don’t know if he intentionally made a run for it or if he meandered off by accident. Either way, Froggy disappeared. Panicked, the family combed the grass, peered under pots, scanned the pool and checked all the yard’s nooks and crannies. Neighbors to the left, to the right, across the front and beyond the back were soon organizing search parties, collecting prayer requests and lighting up social media accounts. By nightfall, though, the turtle was still missing.

Included in this mix is a Russian tortoise named Froggy. Like a lot of us here in Southlake, Froggy is living the dream. He resides in a comfortable house a few doors down from me with a doting family and is, by all accounts, a satisfied turtle. And yet, one day Froggy stepped away.

“I CAN’T ALWAYS RELY ON A CURIOUS GERMAN SHEPARD TO FIND ME WHEN I SLIP AWAY INTO THE DEEP, BE IT VIRTUAL OR PHYSICAL. SO IN AN ATTEMPT TO STAY MOORED, I DO THIS: I LOOK TO THE LEFT, TO THE RIGHT, ACROSS THE FRONT AND BEYOND THE BACK.”

It could be that Froggy only meant to step away momentarily, perhaps for emotional breathing room or psychological restoration. Otherwise I can’t imagine what made him purposefully leave that loving family or their lush backyard. Whatever the reason, few of us around here held out much hope that Froggy would return. But 31 days later, a quarter-mile away and deeply embedded in a holly bush, Froggy was found alive and well by a curious German shepherd. I like to think he was feeling refreshed, rejuvenated and ready to resume his daily life in the ‘hood.

I wonder if Froggy knew how far away he had strayed. Even for us humans, “home” can sometimes prove elusive. Our individual perspectives can be limited. Paranoia and misunderstandings can flow unrestrained and out of balance, tempting us to venture further and further out into a variety of imagined currents. Unchecked, we risk getting caught in powerful ideological riptides that pull us away from where we once found stability. We’re suspicious of people we previously admired, cynical of systems we used to trust and wonder if home is even a thing anymore.

I can’t always rely on a curious German shepherd to find me when I slip away into the deep, be it virtual or physical. So in an attempt to stay moored, I do this: I look to the left, to the right, across the front and beyond the back. I dub this my controllable perimeter. Granted, double-car garages, lawn-care services and 6-foot-tall fences keep us behind closed doors all too often. But as with those tufts of weeds that perpetually grow between the cracks in my driveway, a sliver of ground and a little light are all that is needed for strong roots to take hold.

Wave first. Speak often. Walk over, knock on the door and exchange numbers. Get crazy and share a loaf of banana bread out of the blue. It’s easy to get lost among the 33,000 people in our town, the 29 million people in Texas and the 2.8 billion people on Facebook. Yet minding what’s to the left, right, front and back of me is a manageable way to establish a solid home base.

Our street considers Froggy’s return a manifestation of hope and promise, regardless of which side of the fence we sit politically, which Twitter feed we follow or which convictions we espouse. Against all odds, he made his way back to where we stand ready with Ro-Tel and school-board election signs (and forks), a place a turtle named Froggy can confidently call home.

Lauren Green, a native of Kentucky, has lived in Southlake with her husband and two children for 13 years. In addition to her work at home, she’s also an active volunteer in the community.